Fashionistas, designers, artists, and lovers of all things fashion will gather this Friday at the Indianapolis Museum of Art to feast their eyes on the comeback of its bi-annual fashion show Project IMA. After a 3 year break, the signature event will once again feature distinctive creations from national, regional, and local artists and fashion designers.

Project IMA: Cutting Loose will be presented in conjunction with the IMA’s current exhibition, Cutting-Edge Fashion: Recent Acquisitions. More than 60 revolutionary garments from European, American and Japanese fashion designers who defied the more classic styles are being featured in the Cutting-Edge Fashion exhibition this season. Presented in the exhibition are pieces from noted fashion designers such as Christian Dior, Gianni Versace, Alexander McQueen, Issey Miyake, Christian Lacroix, Jean Paul Gaultier and Vivienne Westwood.

This year’s theme of “cutting-loose” allows and encourages designers to break away from the past designs and work towards a more empirical and innovative future in design.

(Link to designer websites in bold)

Anderson holds a background as an apparel pattern maker, merchandiser and bridal and evening wear designer, she will showcase Klein’s Blue, a garment inspired by Stephen Sprouse.

A 25-year veteran in clothing, costume and bridal gown design, Bennett will showcase a coat romper, titled Romp, inspired by works from Zandra Rhodes and Claire McCardell. She is happy to have the opportunity to participate in this, her fourth, Project IMA.

Blaine, an Indianapolis native, is the winner of multiple awards among the local fashion community and will present Nichiwa, which explores the relationship between Asian cultures and nature.

The collaboration of Ian Kime and Heidi Wieland, Cloud Preaser will showcase Float, a two-piece evening dress created from relics of a former art performance, including plastic inflatables, vinyl, Velcro and a hand-crafted copper wire hoop.

A Chicago-based multidisciplinary artist, Esser will showcase two pieces: Bird Shoes, a metaphor for stability and struggle, and Key Dress, a garment made of antique keys that speaks to the role of memory, home and the remnants we carry throughout our lives.

As members of the Fashion Design and Technology Lab (FT Lab) in Design at the University of California, Davis, Koo and Uy will showcase The Real Beauty of Body, a design infused with elements of technology.

Inspired by society’s perception of beauty in the 19th-century compared to modern times, Lee-Lim will share Kathleen Dress, playing off of the unconventional proportions and shapes seen in the work of Comme des Garcons.

Title: Show Me Your Bones

The new family run boutique and start-up design troupe created exclusively for Project IMA will showcase the quirky The “Donut Wear It On Your Sleeve” Ensemble, made entirely by hand from recycled materials.

Known as AnchoredLotus, up and coming designer Marcheleta will share an outfit designed to go from straight from bed to the office: Cutting Loose of Morning Routine.

Born and raised in Zimbabwe and a recent graduate from The Art Institute of Indianapolis, Mazorodze will present Lunar Eclipse: Earth, a geometric white jumper and high-collared wide coat ensemble.

Moretz, who kicked off her fashion career as the designer and owner of Colleen’s Couture, will showcase a piece inspired by 18th-century fashion titled Transparente Pannier.

With a passion for Assemblage, Chicago-based Pasquinelli will present Another Beautiful World.

Richardson, a custom fashion design for women and children’s wear, will present Love, a cocktail dress with heart-shaped cut outs

A self-taught designer and native of the Yorùbá tribe in Lagos, Nigeria, Sanni will present Àwọn ọmọ Yorùbá in Diaspora, a piece inspired by her cultural heritage.

Winge will showcase Chute, a gown with a train designed from a parachute, inspired by Norma Kamali’s Pantsuit, “Parachute” Collection.

Project IMA is part of the IMA’s ARTx series and made a reality by a gift from the respected Efroymson Family Fund. 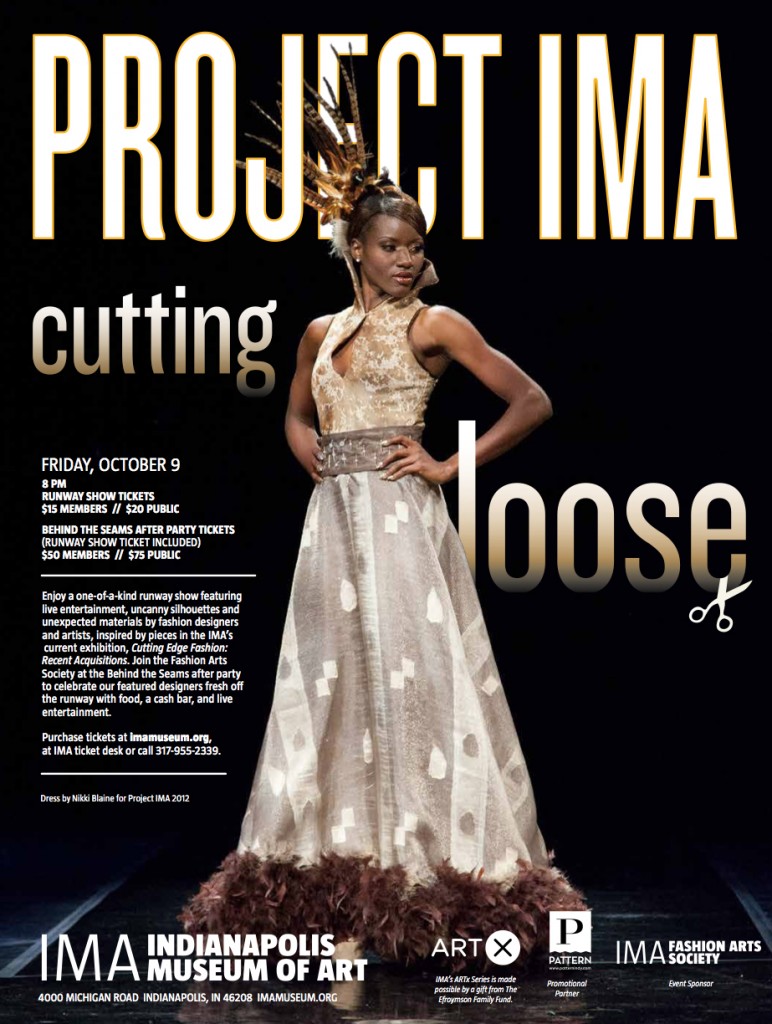