Paris’ Grand Palais is a wonderful place to stage a fashion show. Maison Margiela walked here yesterday. Chanel takes over the entire building later this week. Today, though, it belonged to Julien Dossena and his autumn/winter collection for Paco Rabanne. This season’s brightness is in stark contrast to the darker Studio 54 moods he has emulated the past couple of seasons. With all the light streaming through the room, I fully expected to see a collection that glittered to blinding proportions.

On one hand, I wasn’t terribly disappointed by the looks. Dossena went big with the chain mail and Perspex paillettes both in terms of size and quantity. There was one piece, an exact replica of a mirrored dress that Audrey Hepburn wore back in 1969, that was catching and throwing light in every possible direction. Coming down the runway, the pieces were glittering to the point that they sometimes looked pixelated as though they were digital creations censoring body parts as they walked. The visual effect was stunning.

What threw me off, though, was how much noise the pieces made as they walked. Dossena used piano sonatas played at a very high volume as his soundtrack which isn’t the fullest of sounds, to begin with. Still, it was loud enough to be mildly irritating. Yet, even the volume of the soundtrack wasn’t sufficient to drown out the clinking, clanking, and clacking of the wardrobe as models walked past. Were one to wear one of these garments in a building that has a natural reverb to it everyone in the building would hear every step, every jostle, and every flutter of a breeze that might cause the loose pieces of these garments to move. Going to the library in such attire is definitely out of the question! Fortunately, most of the pieces have slip dresses or t-shirt dresses under them or caban jackets or trenchcoats over them, all of which helped muffle the sound to some degree. Still, one as to think that all the constant noise accompanying every minor move one makes would get just a wee bit annoying.

Fortunately, not everything in this collection wiggles and jiggles in quite the same way. There are plenty of very soft and very quiet jumpers and sweaters and silk negligees and lace skirts to counter the noisemakers in the collection. There is a very retro portion of the collection with more of a 40s feel than the disco vibe of the rest. The contrast is nice and doesn’t really interfere. In fact, some of the soft pieces could conceivably layer with the chainmail to create new individual looks. 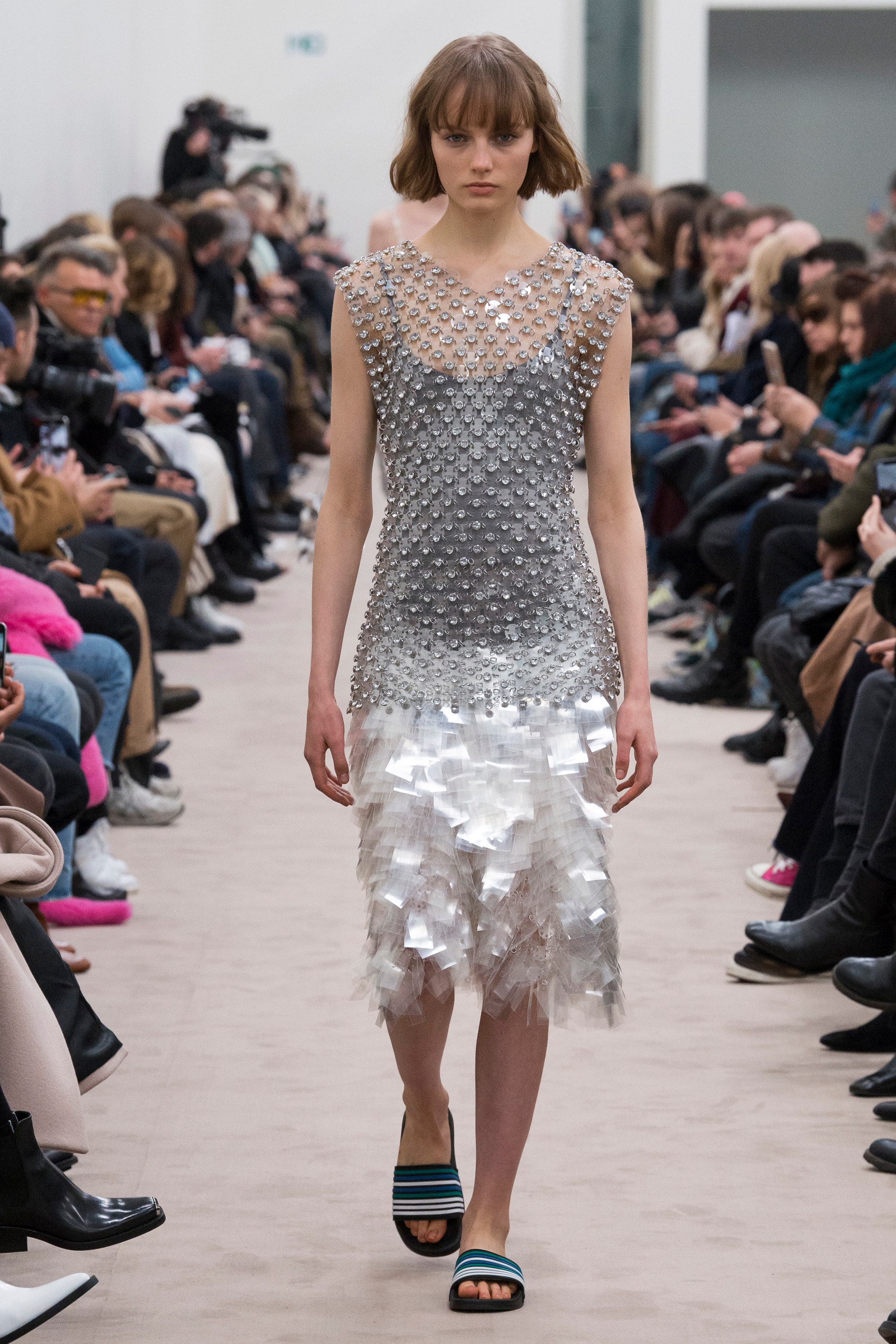 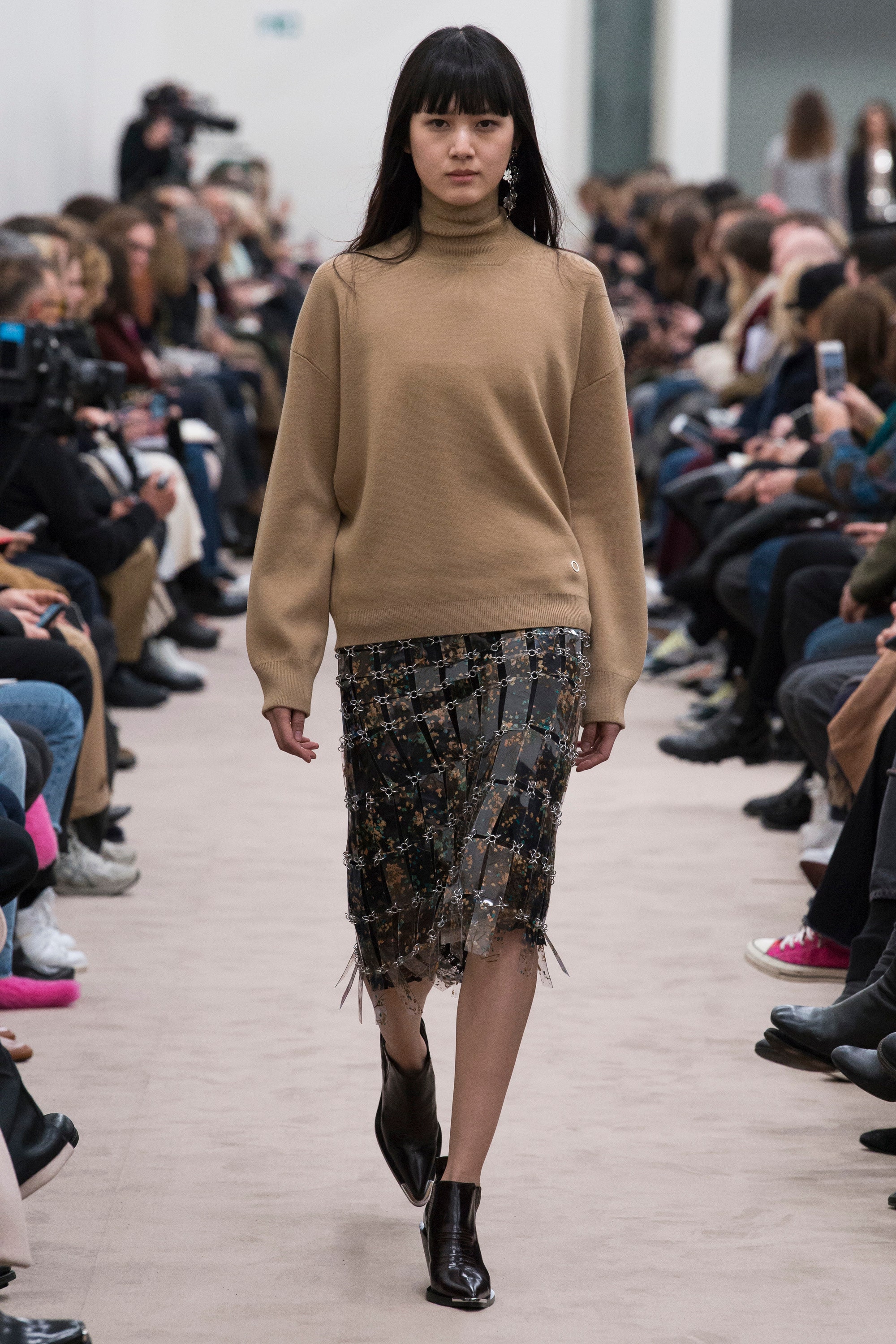 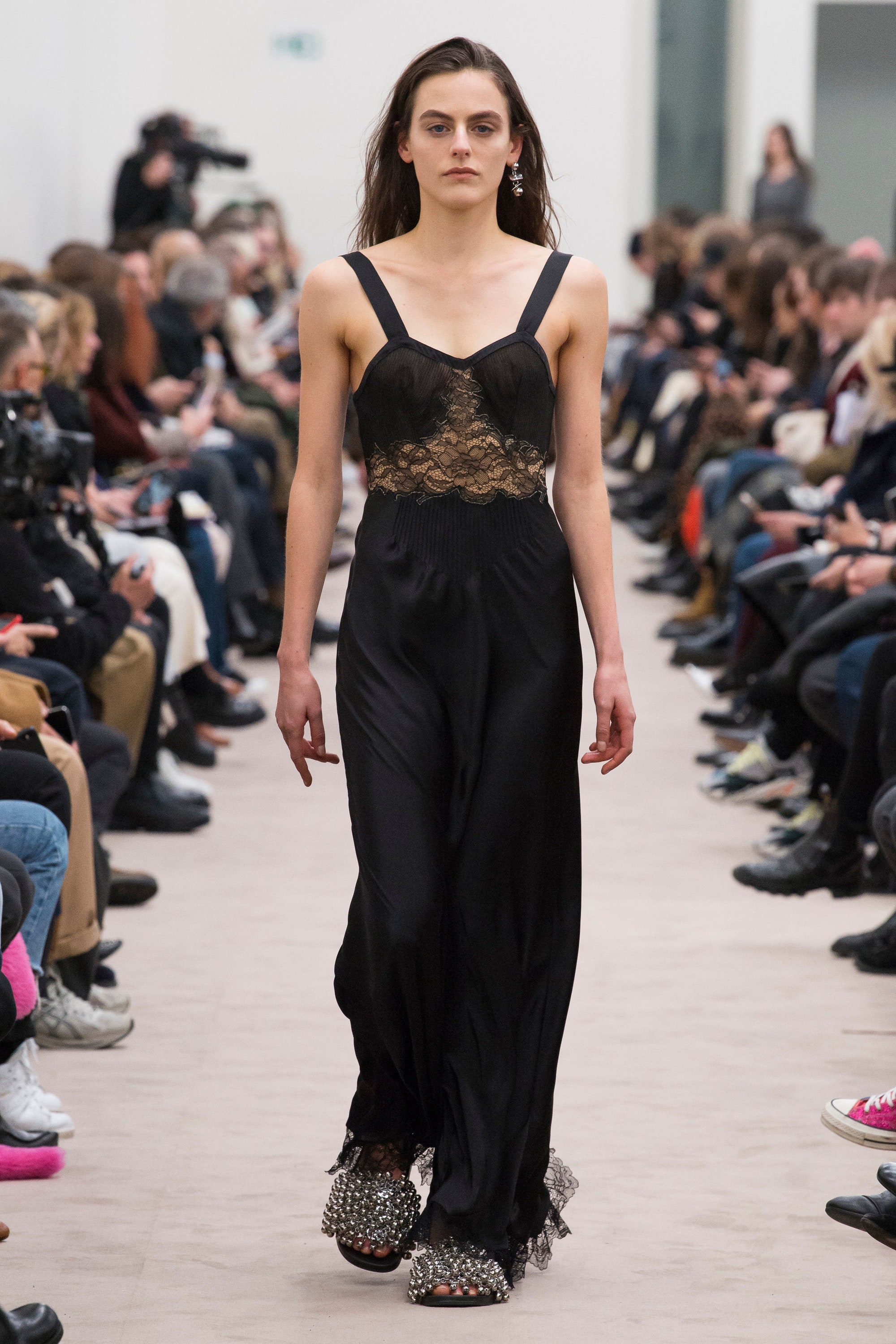 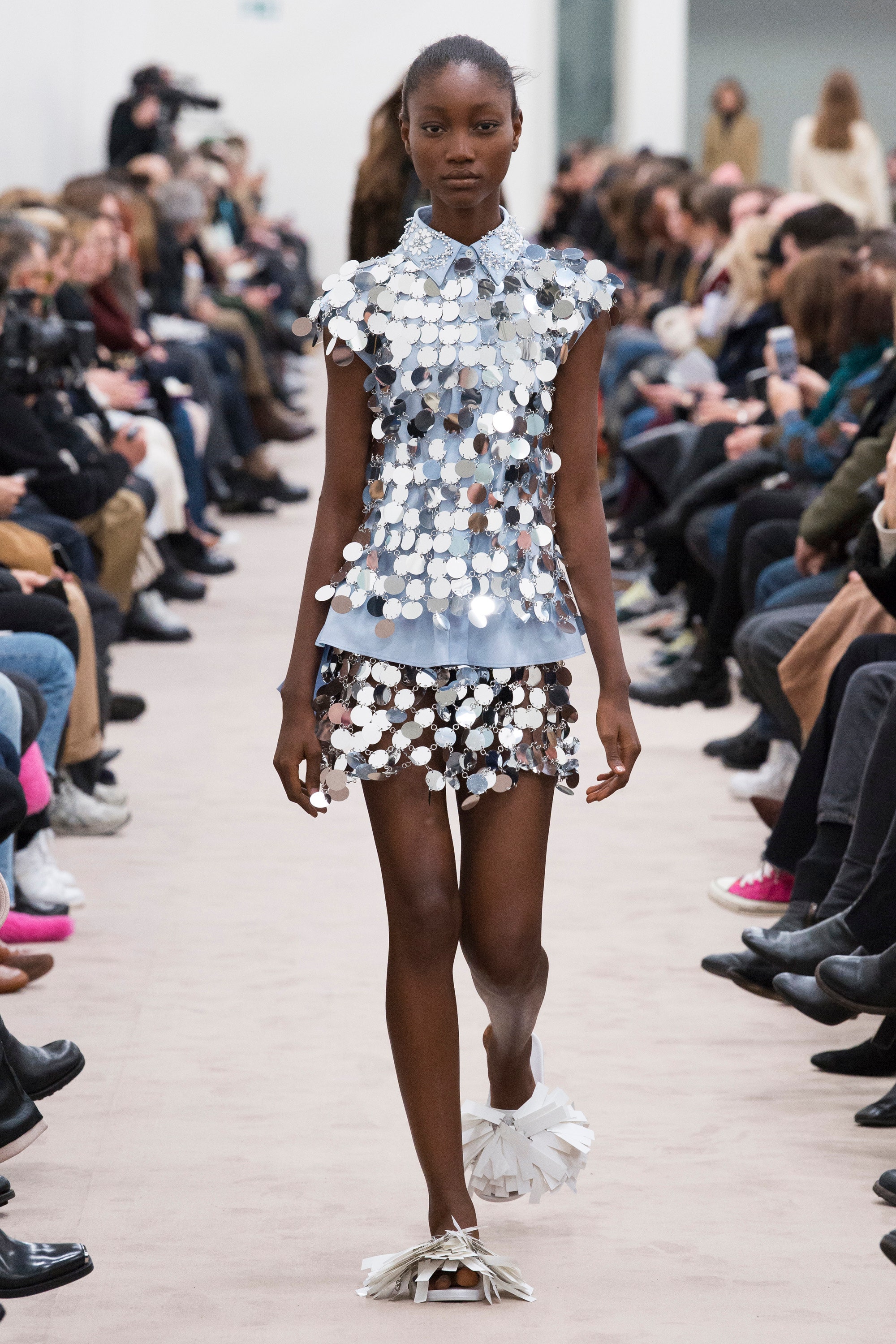 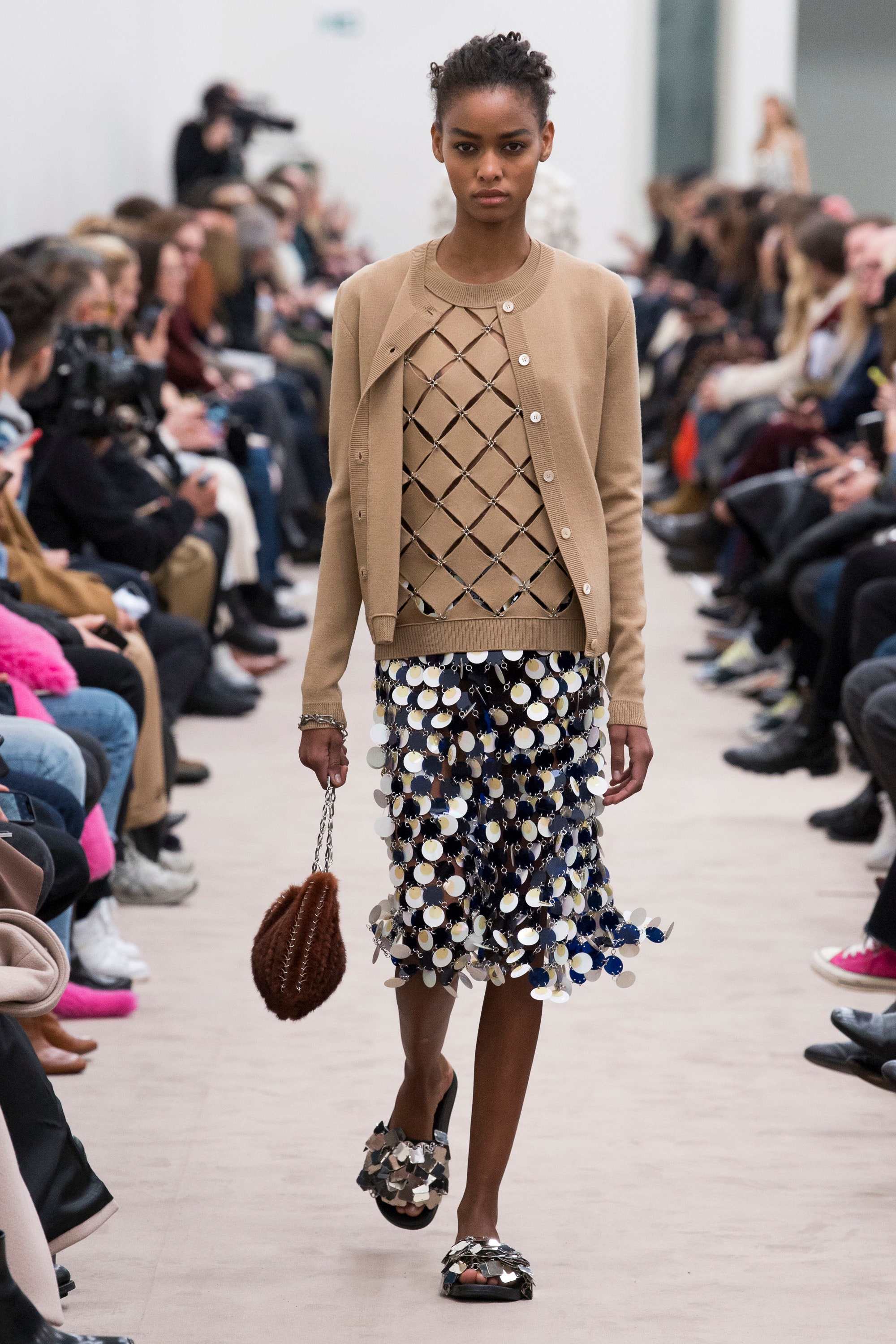 If there’s one thing that bugs the living daylights out of me, besides the noise, it is the lack of effort put into reasonable footwear. No, Julien, wearing shower sandals out anywhere other than the beach is not fashionable. In fact, it is the antithesis of fashion even if one puts shiny strips of plastic or gaudy beads all over them. They’re still cheap, they look cheap, they make the person wearing them look cheap, and they’re an insult to the care and precision of the rest of the ensemble. If one is going to go to all the trouble of painfully doing the metal work necessary to create such visually stunning pieces, honor that work with footwear that comes up to that standard of quality. The flip-flops we saw on the runway were pieces of trash.

I also was thrown for a loss at the change of music for the finale walk. After 12 minutes of piano sonatas, the music shifted to the Queen + David Bowie hit, “Under Pressure.” Now, that’s not a poor choice of music by any means but it was enough of a contrast to give one’s ears whiplash, or whatever the audio equivalent might be.

Bottom line: this Paco Rabanne collection is a feast for the eyes and one is going to look stunning wearing it. Just keep in mind that you’ll need to bring your own shoes and that earplugs are sold separately.

0 replies on “PFW: Paco Rabanne Struts Into The Daylight”