In theory, there were models on the runway in the immense, open square construction at Longchamp racetrack. Depending on where one was sitting, confirming the presence of those models might have been difficult. Normally, when one conducts a runway presentation, one wants the models, and more specifically the clothes they’re wearing to be the dominant aspect of the show. However, that was not the case for Maria Grazia Chiuri’s Dior collection. I’m sure she wanted the clothes to be the centerpiece, but that’s not the way things worked out.

Creating the distraction was a commissioned dance work by Sharon Eyal. Eyal not only created the space-consuming art performance that dominated the runway, but she also had a significant influence on the clothes themselves as well as the makeup look on the model’s faces. As lights came up on the darkened space, it was the dancers, dressed in colorful leotards, who occupied the bulk of the space and the majority of everyone’s attention.

What, there were models in that show? Of course, there were models and they were wearing a collection of clothes that, depending on one’s point of view, were either freeing and non-conforming, or, as one person was overheard saying as they left, “the most boring collection I’ve ever seen.”

For Chiuri, the point of the collection was to give women more openness in their clothing, to take away the body-conforming expectations that society has placed upon them over the centuries. The designer said after the show:

“Fashion, in the past – it was the same as ballet – it wanted to control women and to constrict their bodies. We are living in a revolutionary moment now. This is a new time when fashion should support women, not control them. Dance can show how things can be different. At a revolutionary time, a great house like Dior has to be aware of the change happening all around.”

What came down the runway between the dancers had a base not dissimilar from what the dancers were wearing. Leotards, mesh bodysuits, flowing skirts made of the lightest fabrics, all based largely on Isadora Duncan’s concept of dancewear. Logo covered bras, which have been a big deal in previous collections, now come without underwire and heavier elastic. Whether that’s a good thing likely depends on one’s body size.

The looks worked best with the gowns, where Chiuri tried keeping to the house aesthetic by simply removing corsetting from the bodice. For the daywear, though, the looks feel a bit too much as though one just came from spending a couple of hours at the barre. While athleisurewear is a big theme this season, the dance look dominates a bit heavy for one to wear for normal occasions. 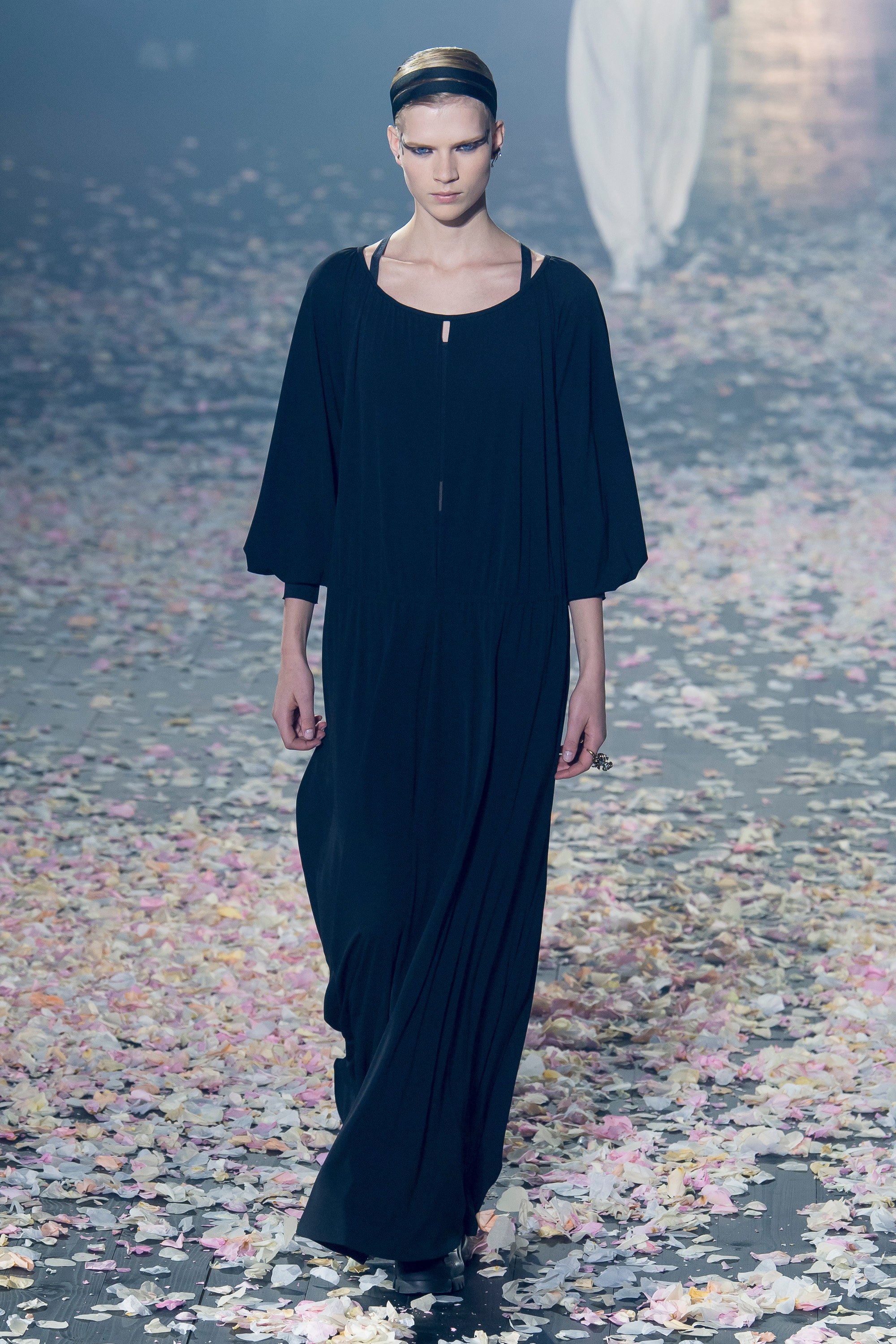 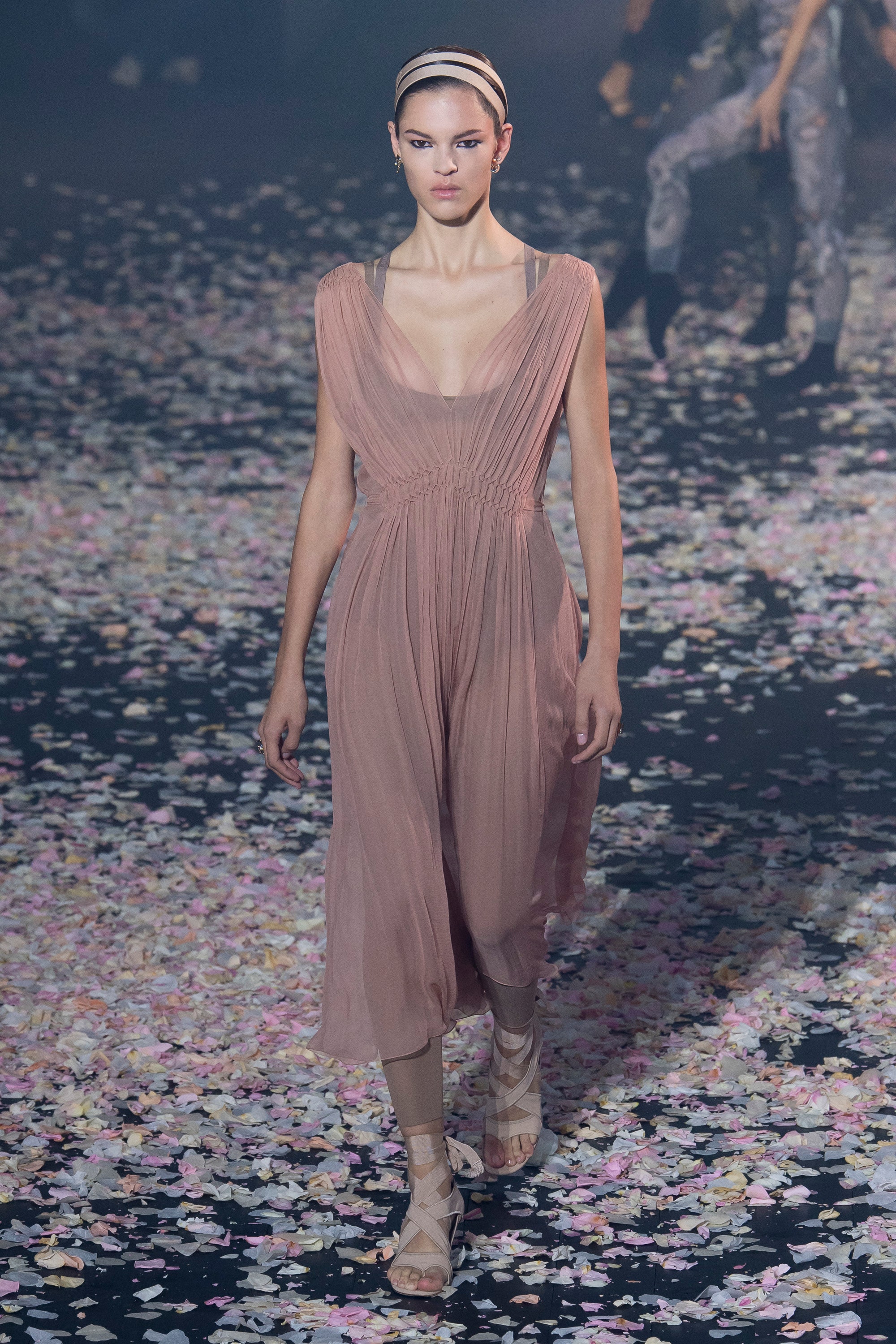 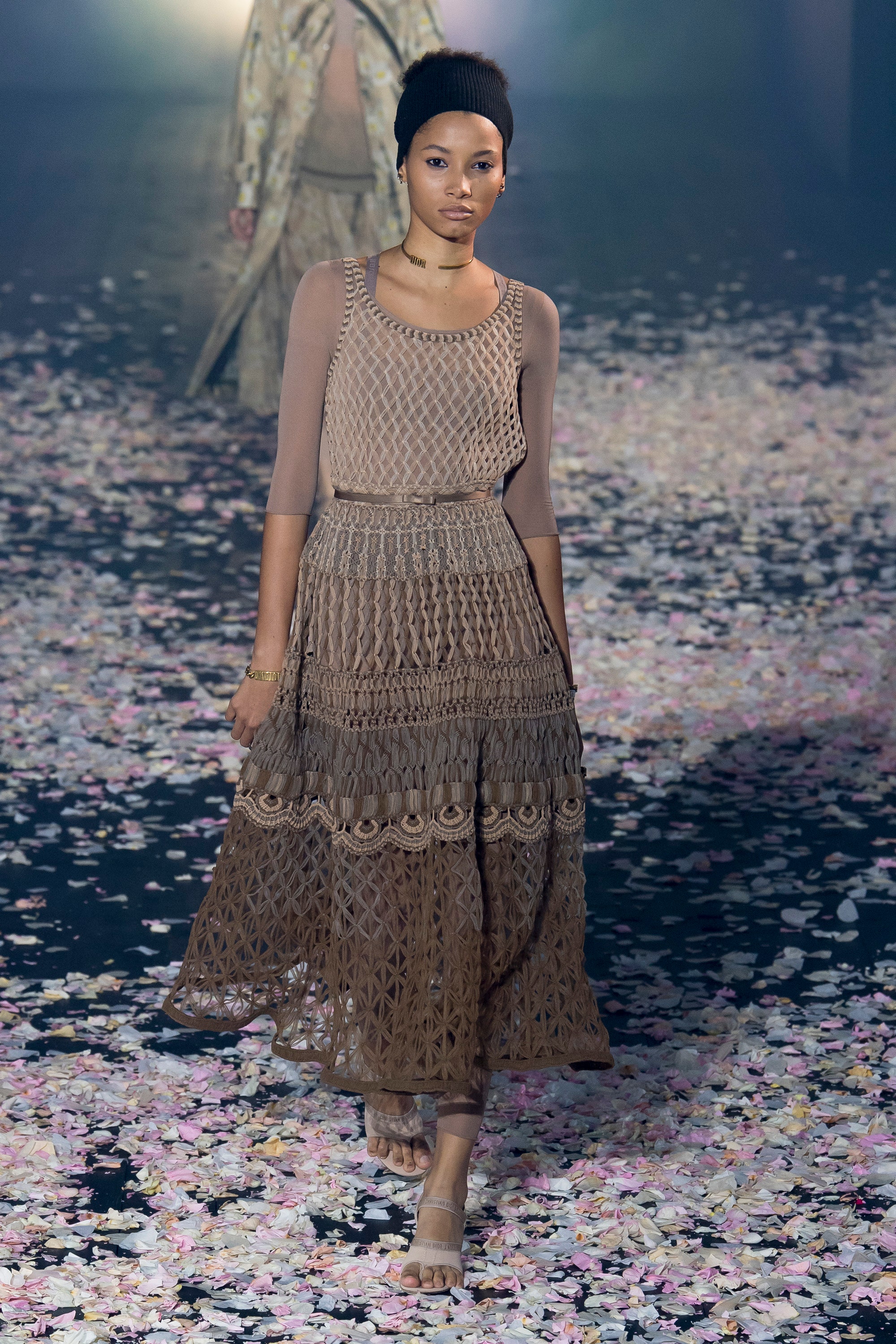 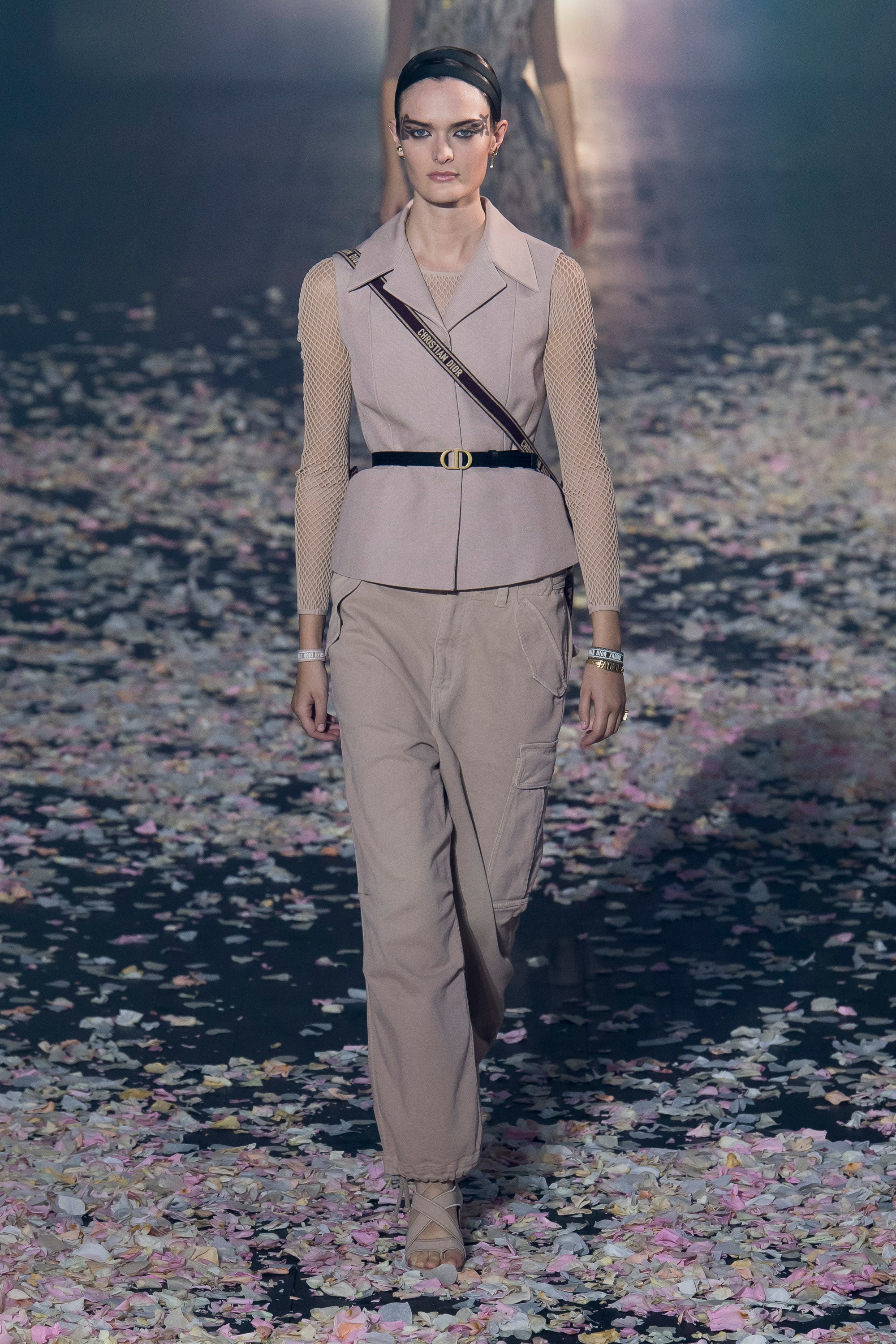 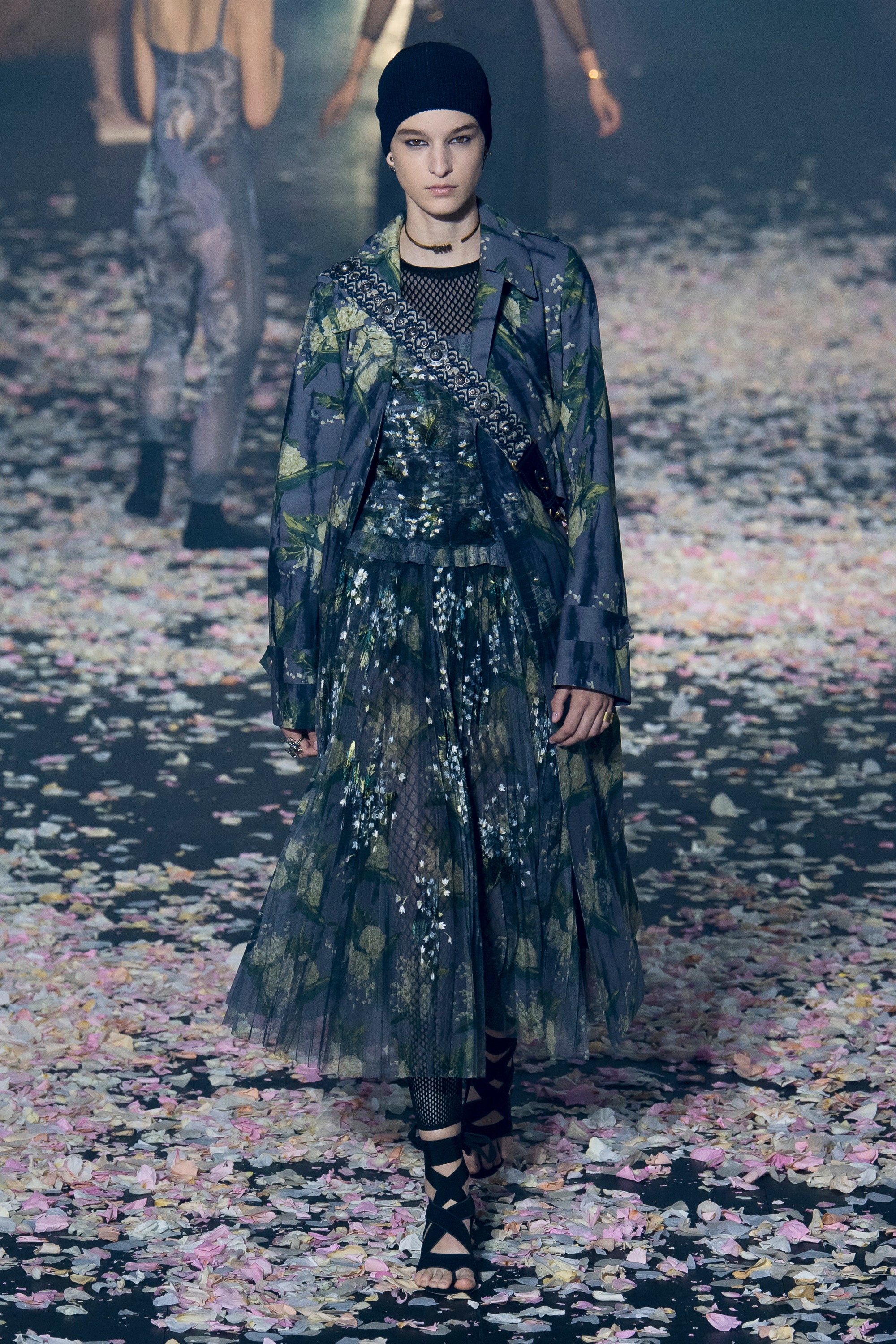 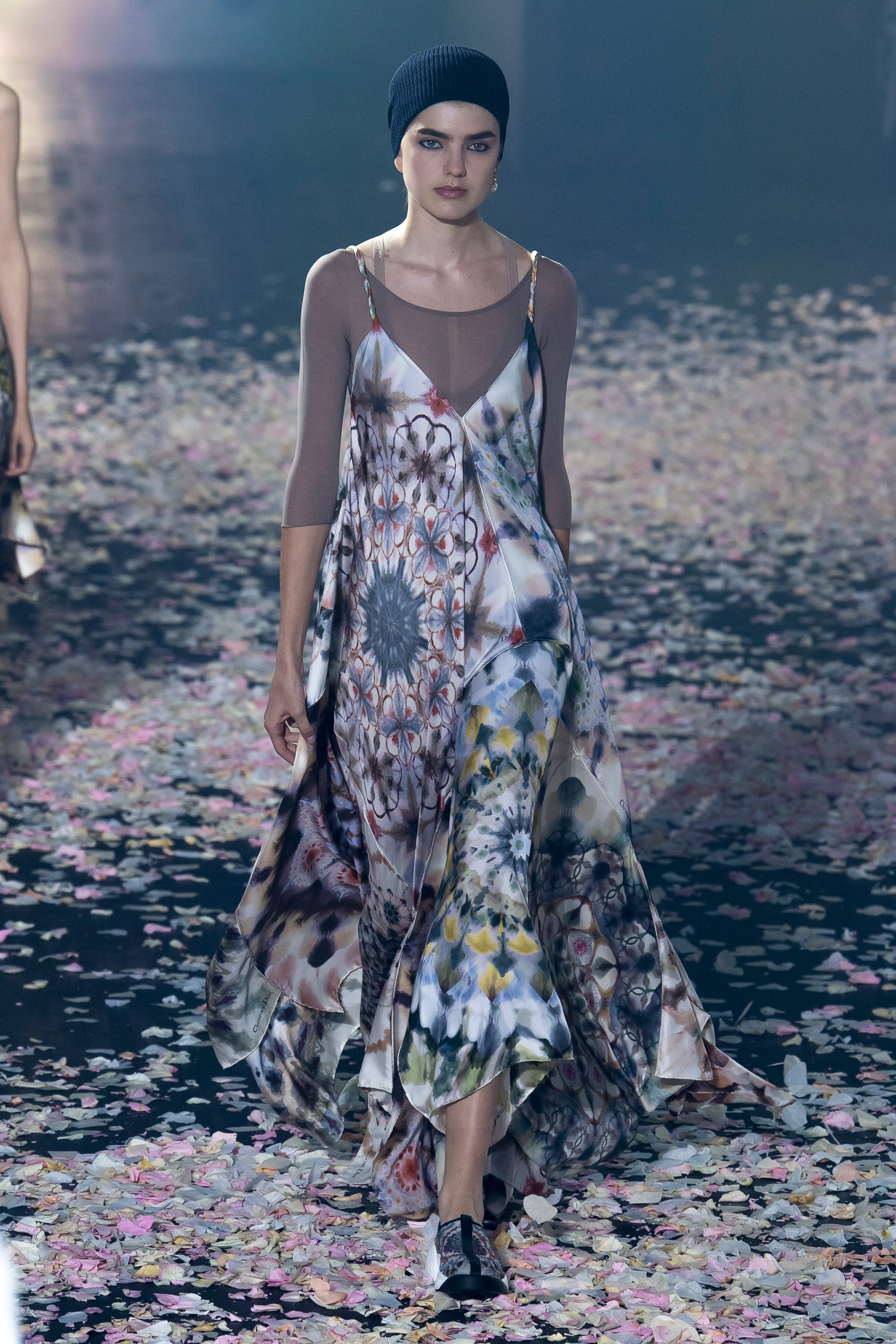 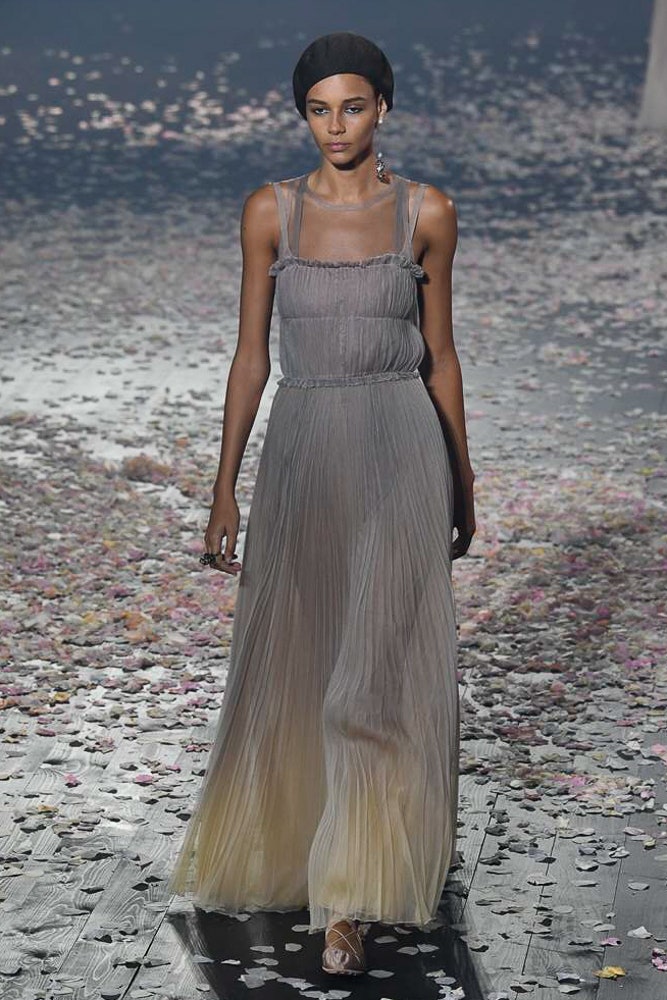 There are some who would happily proclaim this Dior collection as the new look of modern feminism. To that end, it is a positive thing that Chiuri gave consideration to removing some of the stereotypes of womenswear and taking the label in a different direction. What one needs to remember, however, is that loose-fitting, flowing looks are on trend this season. What was shown here was not significantly different from what we’ve seen on dozens of runways already.

Making it more challenging to support this collection is the feeling, if not reality, that there was more color on the runway floor from the falling petals than there was in the bland-paletted clothes. Again, this isn’t the first time this season we’ve seen a collection dominated by basic browns, blues, and drab green. Add in the factor that blue is a bit of a house staple for several luxury brands and criticism of the palette is likely to fall on deaf ears.

Before we walk away, let’s also pay attention to the fact that the models and the dancers were all the same impossibly thin size. While more labels are looking to be as diverse in their size charts as they are in their casting, that’s one aspect of feminism Ms. Chiuri doesn’t seem to be in any hurry to address.

As a result, this Dior collection is likely to be a bit polarizing. Some will love the absence of restriction and free form. Others are likely to see it as buying into the same trend that everyone else has for the season. The good news is you decide for yourself whether to like it. Or not.