Hippie modernism is apparently a thing. At least, Natacha Ramsay-Levi is making it a thing. She wants to make sure we understand that this isn’t yet another tired throwback to the early 70s. She’s far too hip for that.

“For me, it’s this idea of hippie, people who have reinvented, rebooted a kind of [back-to-basics] life, and who have a sensuality, a sense of nature and modernism. Because, I mean, we are in 2018. It’s taking instincts from simple life, prosaic things, and trying to make them fashion.”

That sound you just heard? That was everyone over the age of 50 rolling their eyes. The phrase “pretentious little snot” comes to mind. If the original hippie movement wasn’t all about “taking instincts from simple life, prosaic things, and trying to make them fashion,” then we were all duped. Have you seen what we were wearing back then? Yes, you have, and every designer on the planet has tried copying it at least once in the past three years.

What has admittedly changed is that the fabrics used by Ramsay-Levi are a lot more accommodating for things like spending a week out in the Nevada desert or a weekend music festival filled with bands no one will remember in ten years. We were stuck with denim, leather, and densely woven cotton, which is what prompted some to choose not wearing anything at all. Now, people get naked simply because it represents “freedom.”

Despite the ostentation of her reasoning, the clothes Ms. Ramsay-Levi produced for this season are more in line with the overall Chloé than last season. She goes in for decorative textures in cascading volumes with an earth tone palette that looks good even if it gets wet. She’s all about tactile ikat, fringes, and, oh look, botanical motifs. Hmm, where might I have seen those before?

While the layered scarf look runs pretty heavy through the collection, her use of paréo-styled skirts is spot on fresh. At the same time, she tosses in a custom carpet jacquard heavy enough for everyone to huddle under should a sudden rainstorm decide to drench everyone, as has been known to happen at music festivals. We’ve seen a lot of jacquards this season and this one is truly impressive. 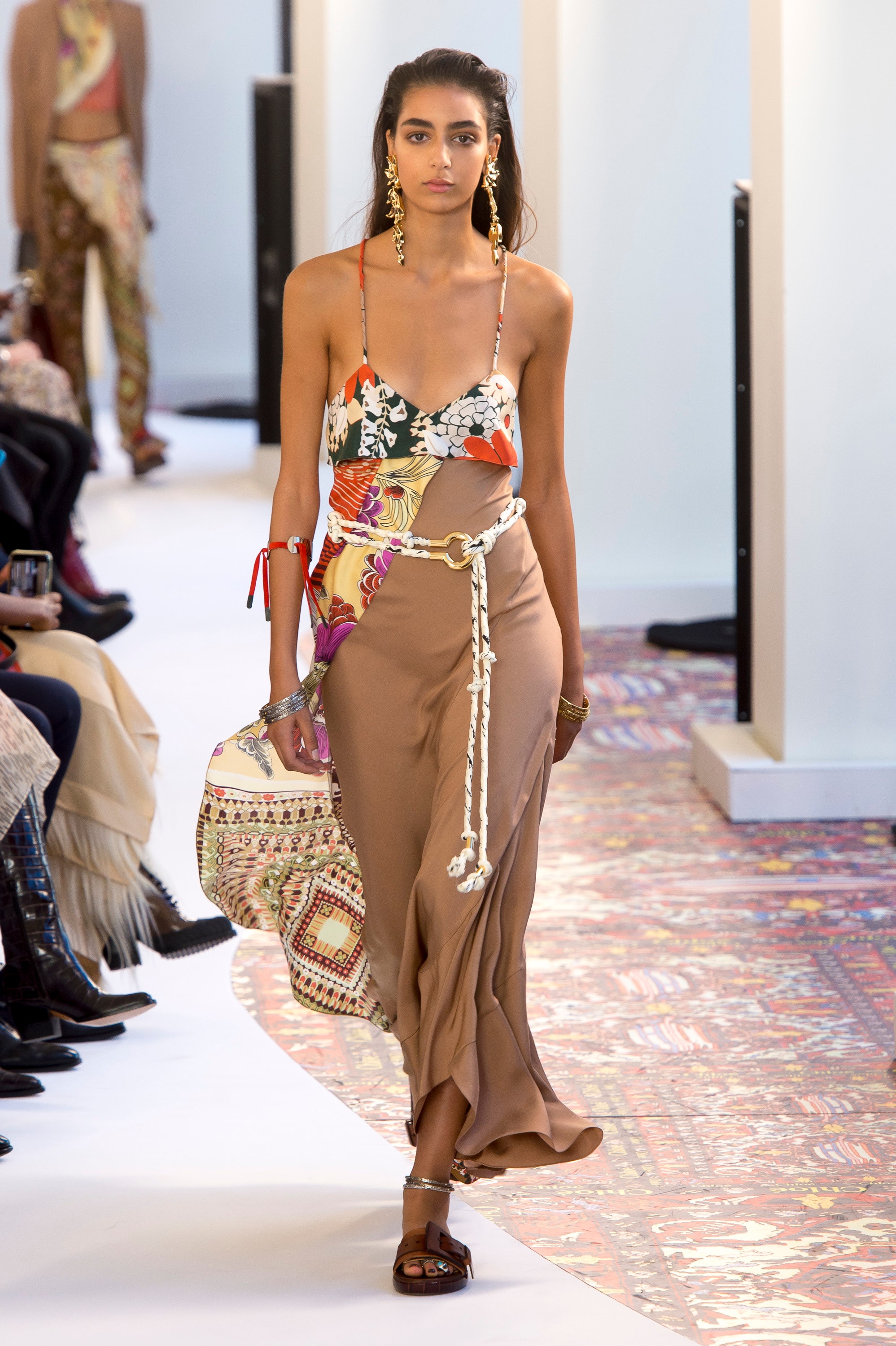 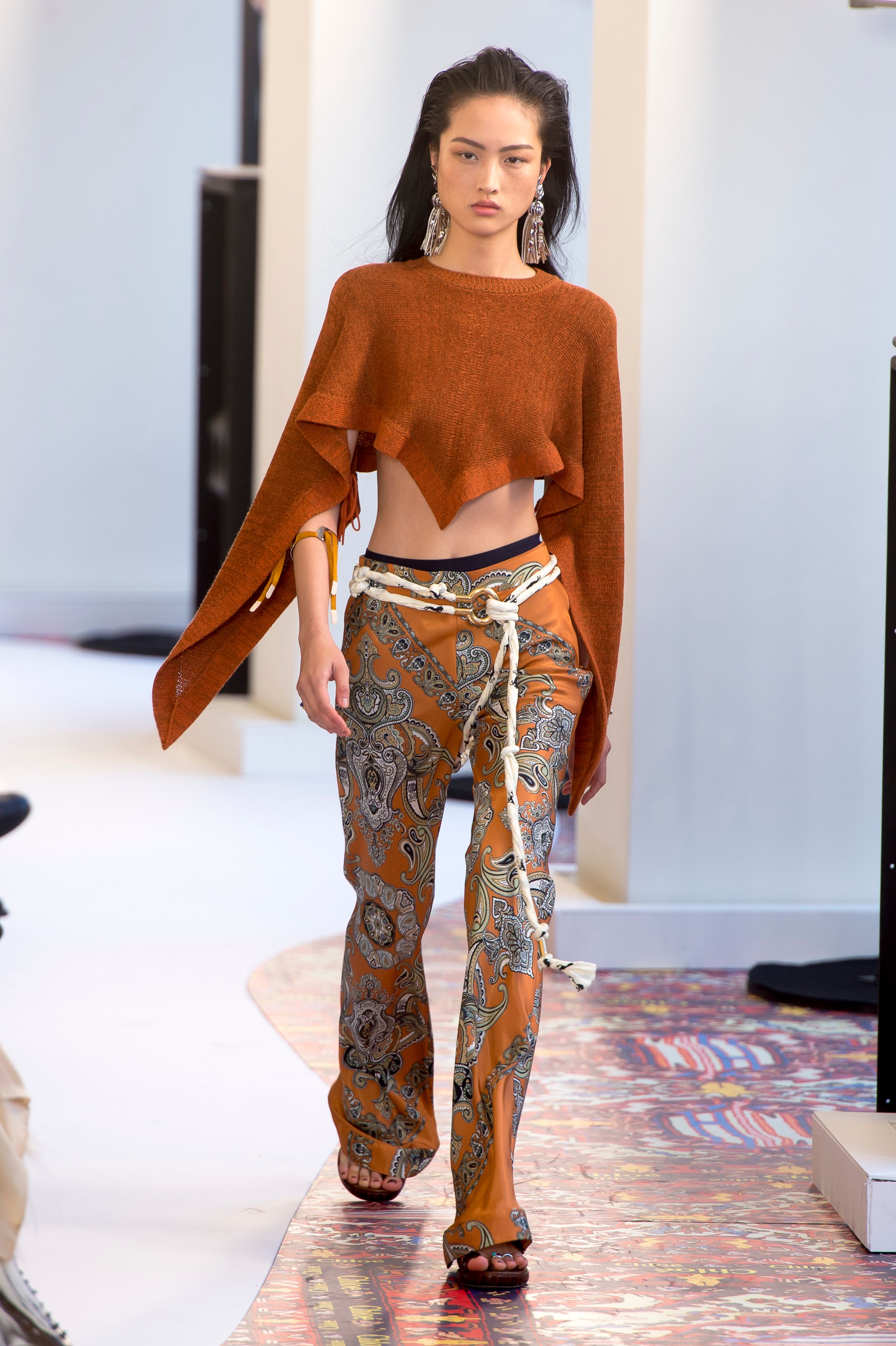 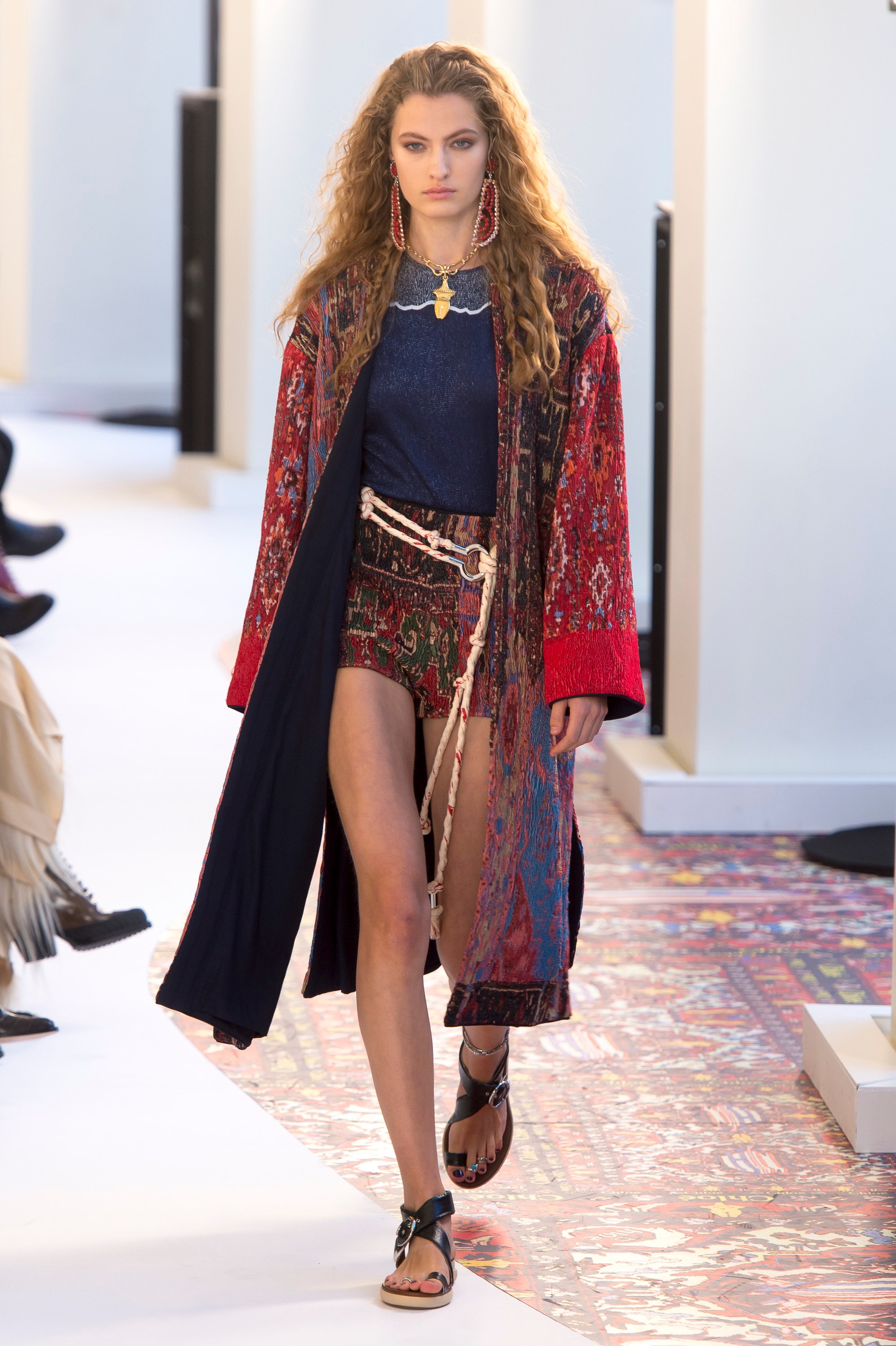 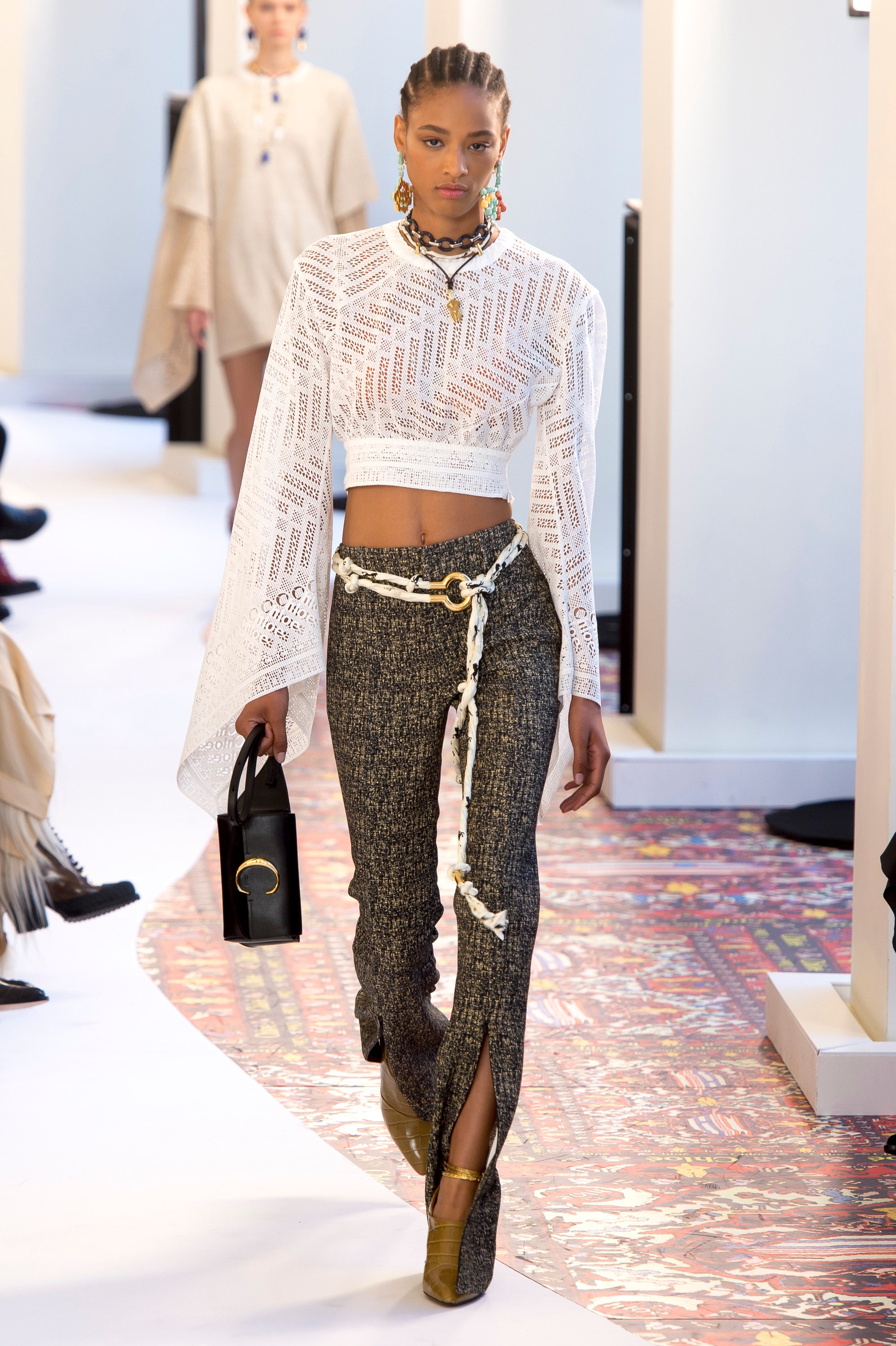 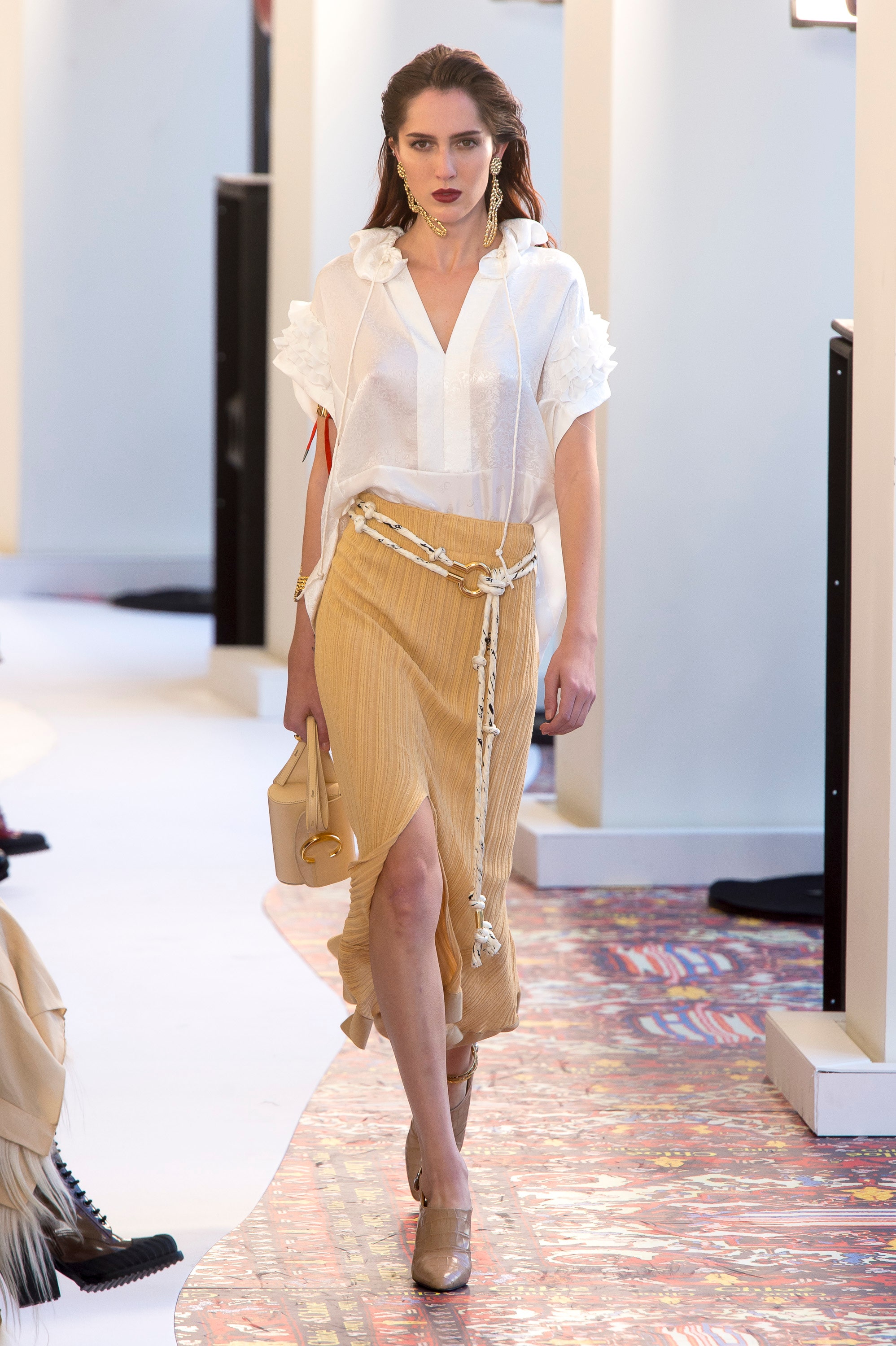 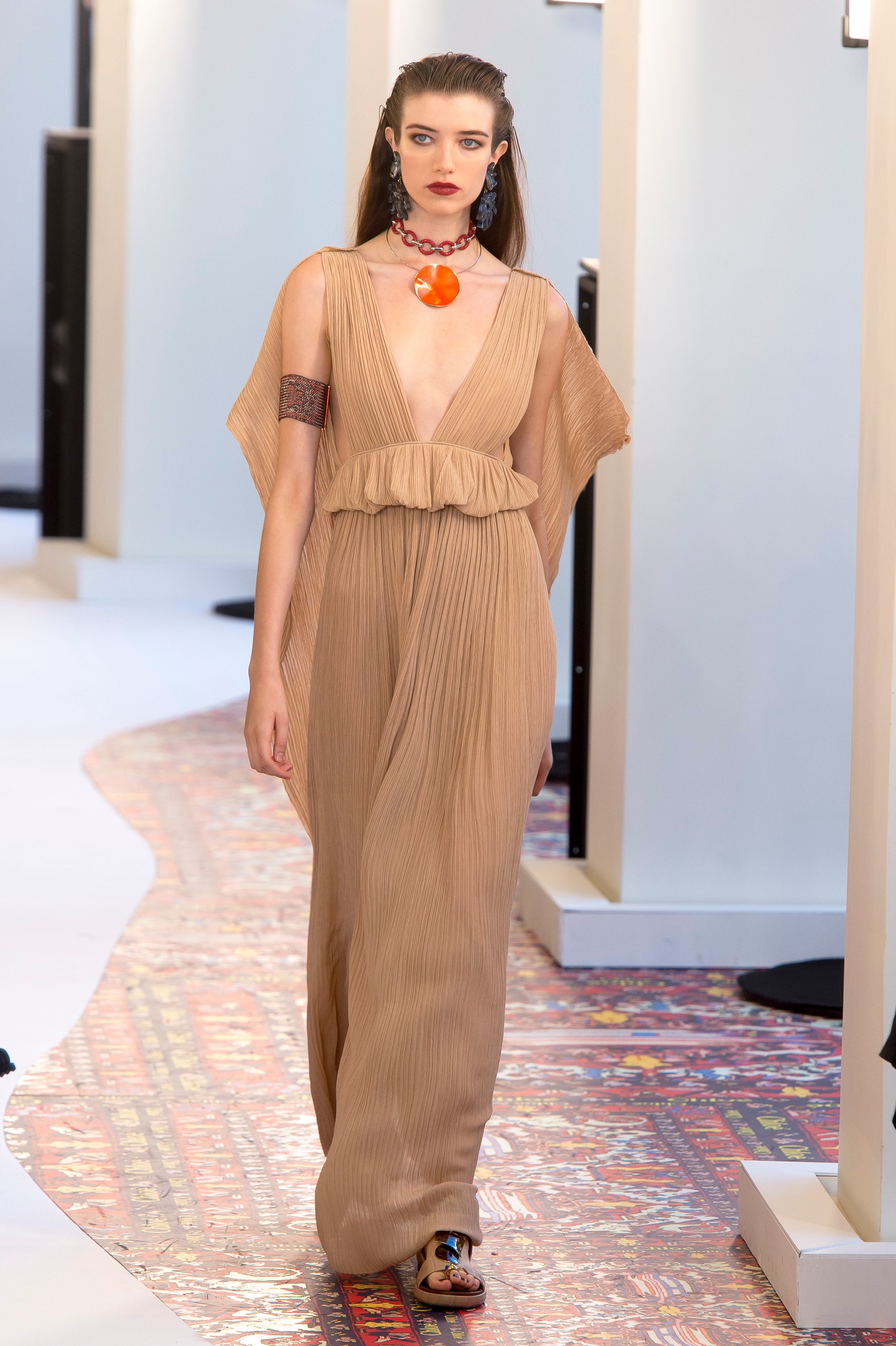 Why, yes, that is PATTERN cover model Grace Hartzel in that last picture. I knew you’d notice.

Accessories are, of course, always a big deal in any Chloé collection and this season the big one is the twisted silk lariat belts providing some sense of shape to many otherwise full looks. The super-soft belts have a good look to them but let me offer a couple of words of caution. First, if one actually wears one outdoors where the grass has perhaps not been perfectly manicured for, oh, ever, then be prepared for it to snag every weed pod and thorn it brushes past. Second, the belts are long enough that they sometimes end up in inconvenient places. During the walk, one decided to camp out quite uncomfortable between a model’s legs in a most unflattering way. She was smart enough to not go trying to dig it out, but if it can happen on the runway know that it will happen more often in real life.

More impressive are the gem harnesses that show up on a few dresses. Depending on the person wearing them, these come off as either a superhero motif, which is admittedly appropriate for most women or something darkly sensual and alluring. Either look is attractive but could elicit different responses.

All in all, we see Ramsay-Levi starting to settle in with the whole Chloé aesthetic. There seems to be some consensus that she’s still holding back on her native originality but a measured approach to letting her own creativity emerge is probably a safer way to appease fiercely loyal Chloé customers who still can’t get over Claire Waight Keller’s departure. To those still out there: seriously, get over it. Move on. Natasha Ramsay-Levi is proving herself more than capable designer for this label.

Just know we’re not buying that “Hippie modernism” line. What’s really going on is that this is a collection for women who want to look like they’ve been out for the weekend but in reality never left the air conditioning. Not that we blame them. Original hippies have been doing the same thing since the 80s.