This fashion season has had its share of extravaganza starting all the way back with Tommy Hilfiger on Venice Beach. No one does extravaganza like Karl Lagerfeld, however, and it seems he took this season’s previous displays as a challenge to outperform them all. Which, of course, he did. Like this: 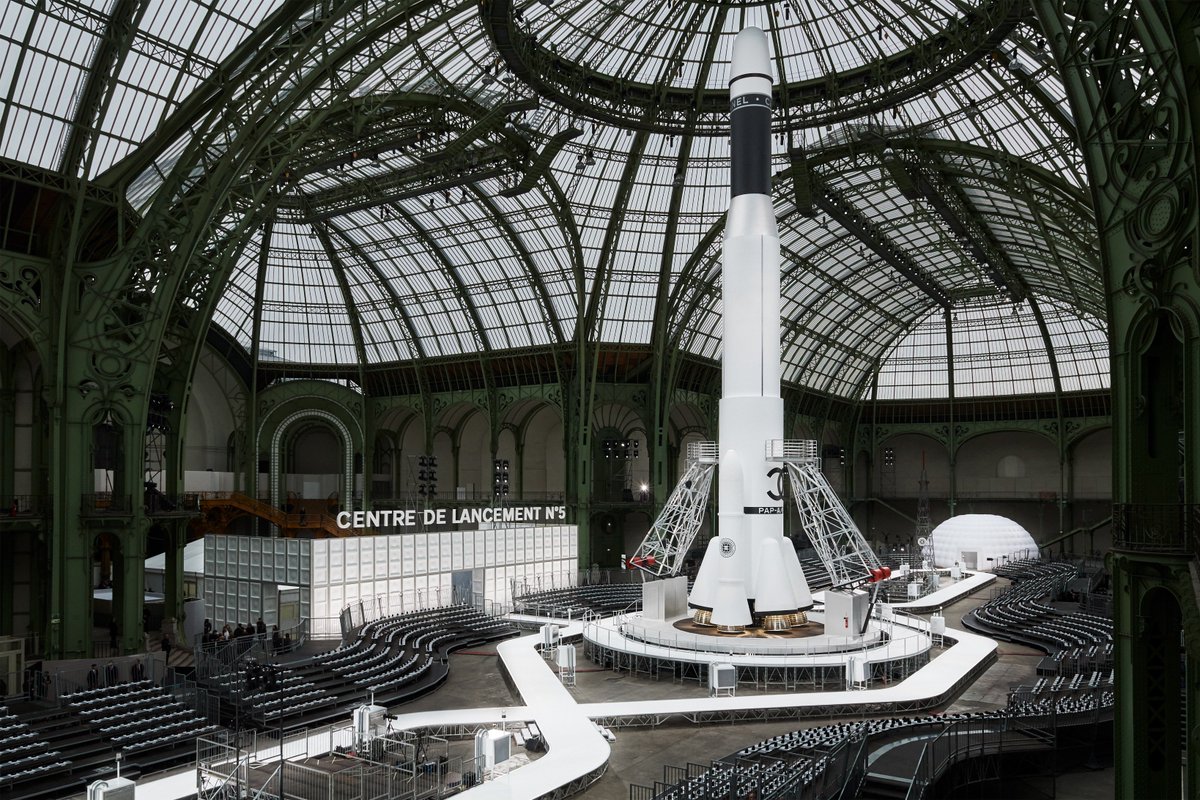 Yes, that’s a rocket in the middle of the Grand Palais. Yes, it really works (sort of). This is Chanel’s Ground Control and the 60s are alive and well.

To some degree, we can blame this season’s obsession with all things metallic for Karl’s creation of this out-of-this-world collection.Metallic thread is the primary difference for most of these looks that pull directly from the house’s 1960s archives. The look isn’t as horrific as one might think. Lagerfeld didn’t make the entire garment metallic, but carefully wove the metallic threads in with the traditional tweed for which the house is known.

Then, there were the boots, the go-go style boots that were popular in the dance clubs of the 60s, all covered with crystals so that they sparkle prettily as one walks around the launch pad as one tends to do. Oh, and don’t forget the hair, long hair teased at the front. If one is familiar with Jane Fonda’s look in the campy space movie Barbarella then you have a good idea what I’m talking about. There are even some monochrome men’s looks along the way, though they’re quite unisex in their look, to the point of being rather unimaginative.

If this is Lagerfeld’s idea of the future, though, some people may have reason to worry, namely, people of color. This was one of the whitest runway casts we’ve seen all season and that did not make things any more attractive. In fact, when I hadn’t seen a black model by the half-way point of the show, I found myself rather bored with the continuous litany of white girls parading down the white runway. To be accurate, there were three light-skinned Asian models and only one, count her, ONE black model out of the first 48 looks. Only three other black models showed up in the back half of the show. Where the rest of the fashion world has done a good job examining diversity on its runway, Chanel seems to be stuck back in the 60s in all the wrong ways.

This may be one of the most unimaginative collections Karl has sent down the runway since 2010. There are too many looks where the only significant difference between this season and the season the silhouette first appeared is the presence of that metallic thread. The rest of the look is largely identical. On one hand, this probably pleases the hardcore Chanel buyer who loves recycling Coco’s original works over and over and over and over ad nauseum. However, there is so little adjustment from the original look that much of this collection feels like a stroll through a museum we’ve visited several times before. 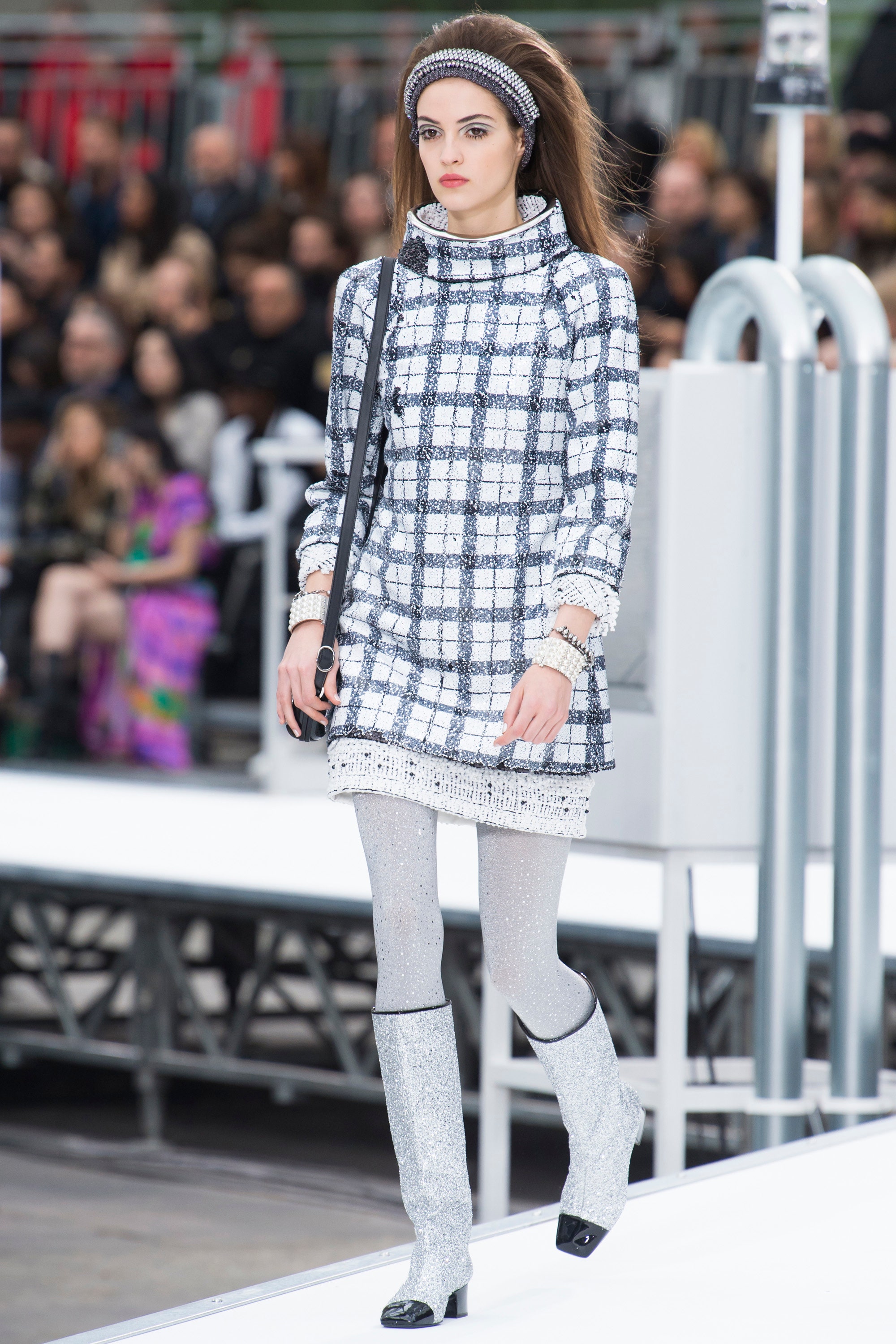 This look is a good example. Take away the glitter and make the boots a straight black and this look hasn’t changed since the 60s. The huge collar, which at least infers that it might work for coupling a space helmet, and the hair band were present back then as well. All that really changed was the material.

Granted, that situation wasn’t true of all the looks. Karl did have his mylar moment. He really seems to like the reflective fabric that is used to keep astronauts warm in space. He even featured it in some of the main imagery on the Chanel website prior to the show. I wouldn’t have been too terribly surprised to have seen a lot more of this than we did. 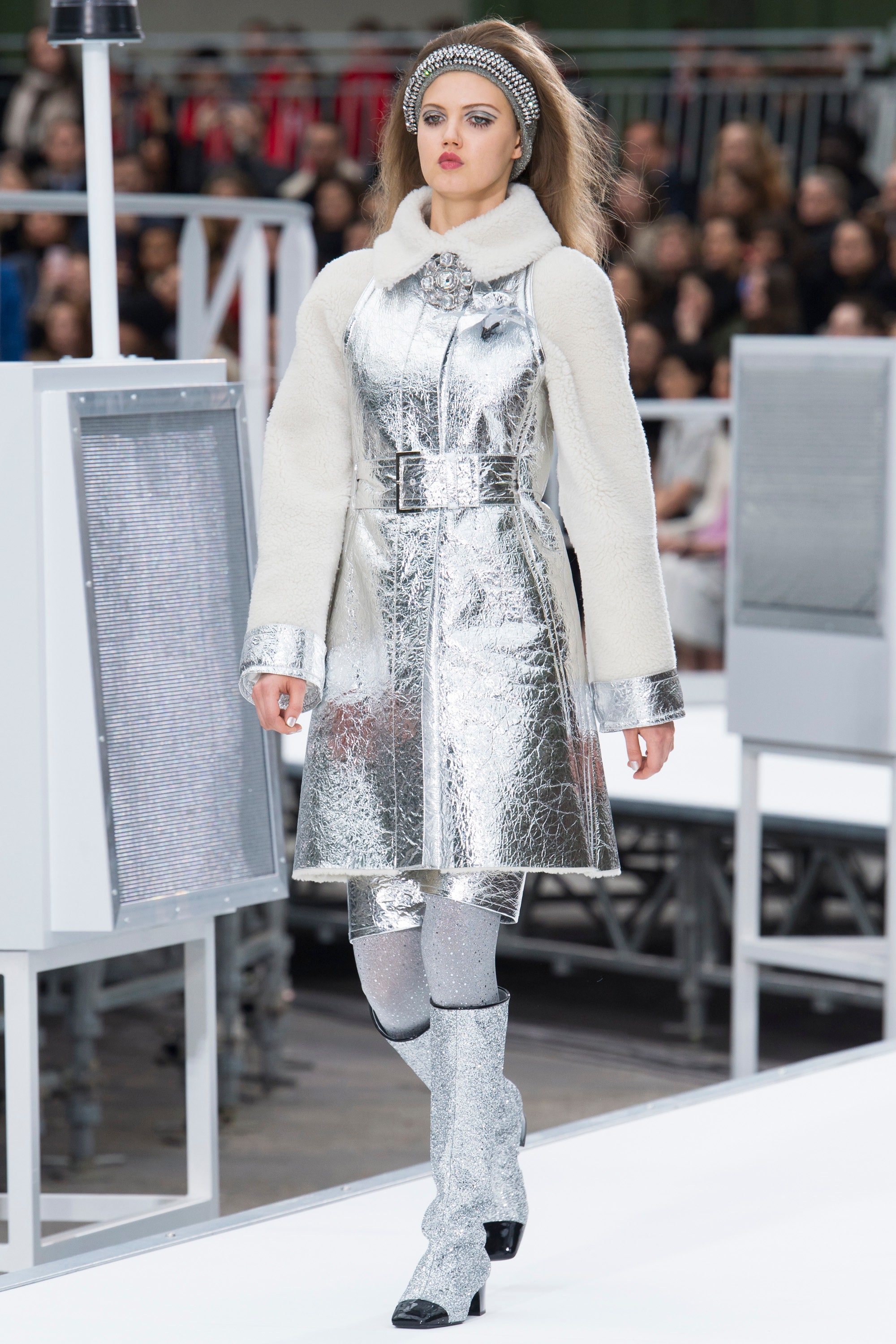 Okay, you won’t convince me that those mylar shorts won’t chafe after being walked a couple of hours. The look is cute, to a point, but its overall appeal is limited, as in someone saying to you next year, “You’re still wearing that old thing?” The look fits the theme, but unless you’re hanging out around Cape Canaveral, where they rarely need coats at all, the look is extremely limiting.

The coat and shorts are at least attractive, though. Lagerfeld’s space take on puffer coats is one of the most ridiculous things I’ve ever seen come down a Chancel runway. One would have to be an extreme Chanel enthusiast to even think about wrapping one of these things around your head, and even then one best be ready; all the other kids are going to tease you for this one. 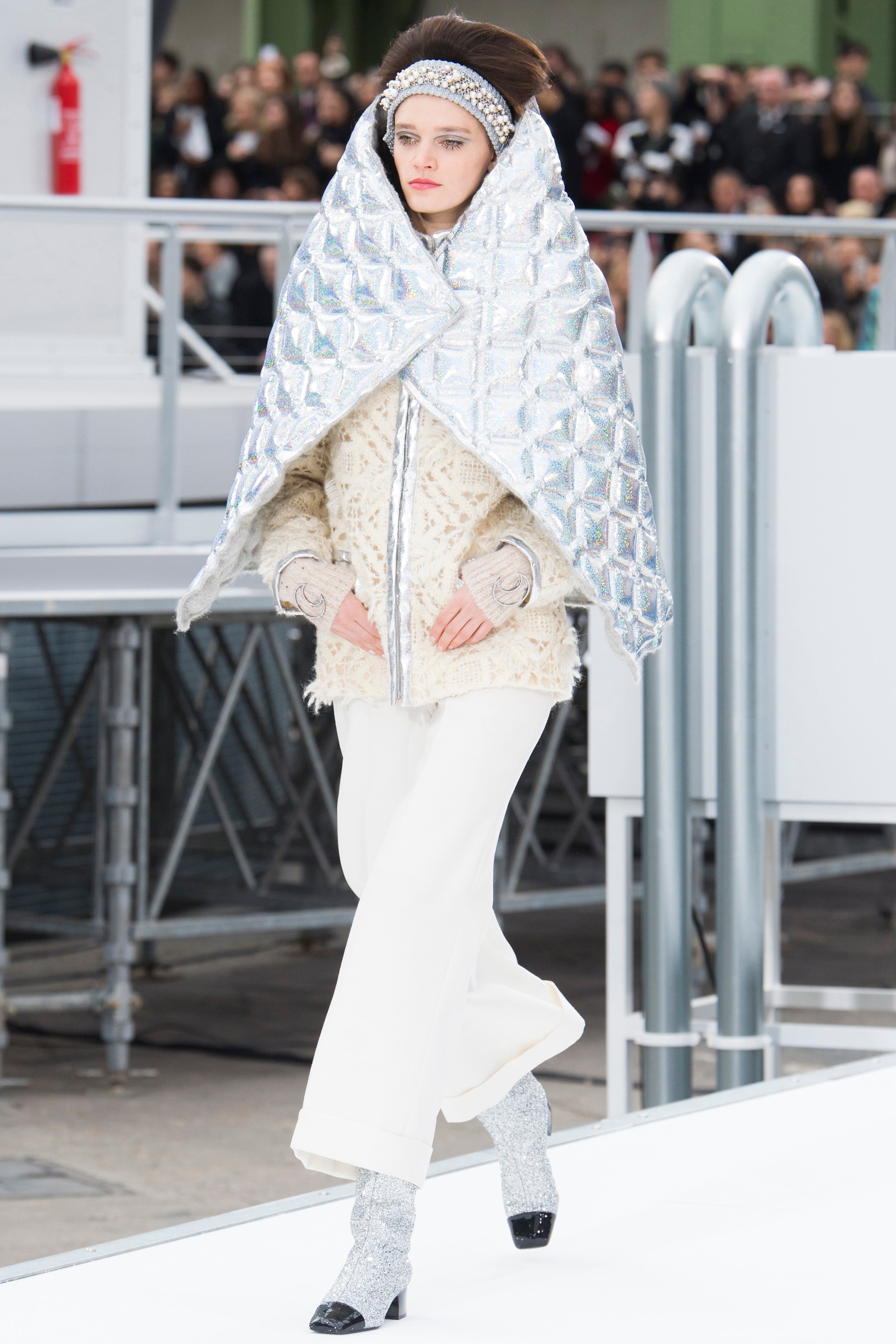 Let me just add that as ridiculous as it looks in this picture, the silliness factor is raised several times when one sees it walking. If you feel that you just have to buy one of these, then might I suggest leaving it in the car for those cold mornings before the seat warmers have kicked in. Or, perhaps you could donate a few to the local animal shelter to help keep little puppies and kitties warm through the cold months. But actually wearing it out on the street is not advisable.

The one thing that is new is a white on black print that looks like an x-ray of a space suit. You’ll notice that the model in the picture below is also carrying a bag shapped like a rocket. Those little bags are going to be popular. The rest of the look, not so much. That many space men on one set of clothes exceeds the total number of astronauts involved in NASA’s Apollo projects (32, in case you’re now wondering). Again, it is such a niche themed print that it has no real longevity to it unless they start those manned flights to Mars really soon.

After all that parading around in sparkly boots, the models returned prepared for their finale walk. Lagerfeld and his nephew, who has been by his side the past three seasons now, made a brief walk around the base of the spaceship. Then, after the designer left the catwalk, the lights started flashing, smoke came out from the bottom of the rocket, and in a giant roar that thrilled the assembled crowd, the rocket rose some 20 meters to the top of the dome. Everyone was so very thrilled by the spectacle.

Unfortunately, this is a collection that needs all the hype and spectacle it can get. Coming this late in the season, had this been a normal show with a normal runway, I fear I might have fallen asleep, rolled out of my chair, bumped my head and thought I’d been abducted my long-legged aliens. This is not the best look Chanel has ever had.

Ya’ gotta give  him credit, though. Lagerfeld really knows how to put on a show.