We’ve seen a seemingly endless parade of 70s fashion over the past four seasons or so but watching Hedi Slimane’s collection for Spring come down the runway was such a flashback that I almost felt like I was back in high school, except for that whole part about my joints popping and muscles hurting and needing to take a handful of medicine a couple of times a day. Slimane zeroed in on 1974 as a pinnacle of when women, who are now likely your mother’s age, looked to Celine for that casual hip look to rival the super-slick and sparkly disco fever look that was coming along at the same time.

So what do we get for this trip down memory lane? Enough pre-washed denim to clog the dryer vents for a year. Boot cut, of course, because that’s what was cool even in places where there weren’t horses. For those of us growing up in the country, the look was a necessity and it was nice to see fashion accommodating that. I mean, have you ever tried pushing straight-legged jeans down over western-style boots? It’s not fun. He also did a good job duplicating those silk blouses with the loose ribbon bows at the neck. Silk isn’t necessarily the most practical fabric when summer starts getting hot, though, and since the planet has set new records for heat the past four years running now might be a good time to look for alternatives. Again, there’s no talk of sustainability here.

What surprised me is how accurate he was with the full calf-length skirts that were so popular during that period. They were a staple for many young women who wanted something casual but whose conservative environment still frowned on women wearing pants. Yes, young ones, that really was a thing. Be glad we’re past that for the most part (there are still some out there …). Hedi did get a little fancy with some of the evening dresses, adding jewels and sequins in places that didn’t always make sense, but nothing was so far fetched that it wasn’t believable. 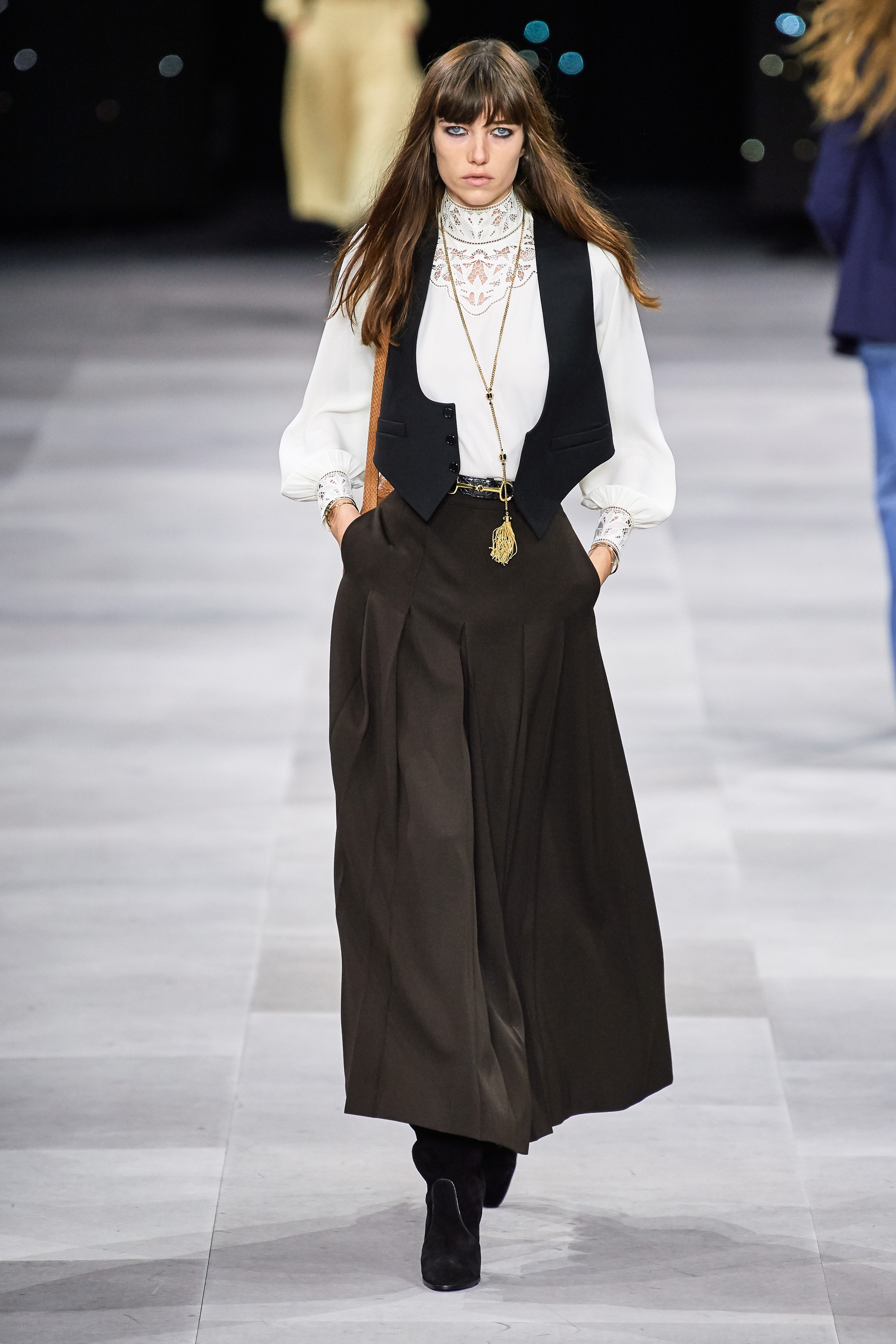 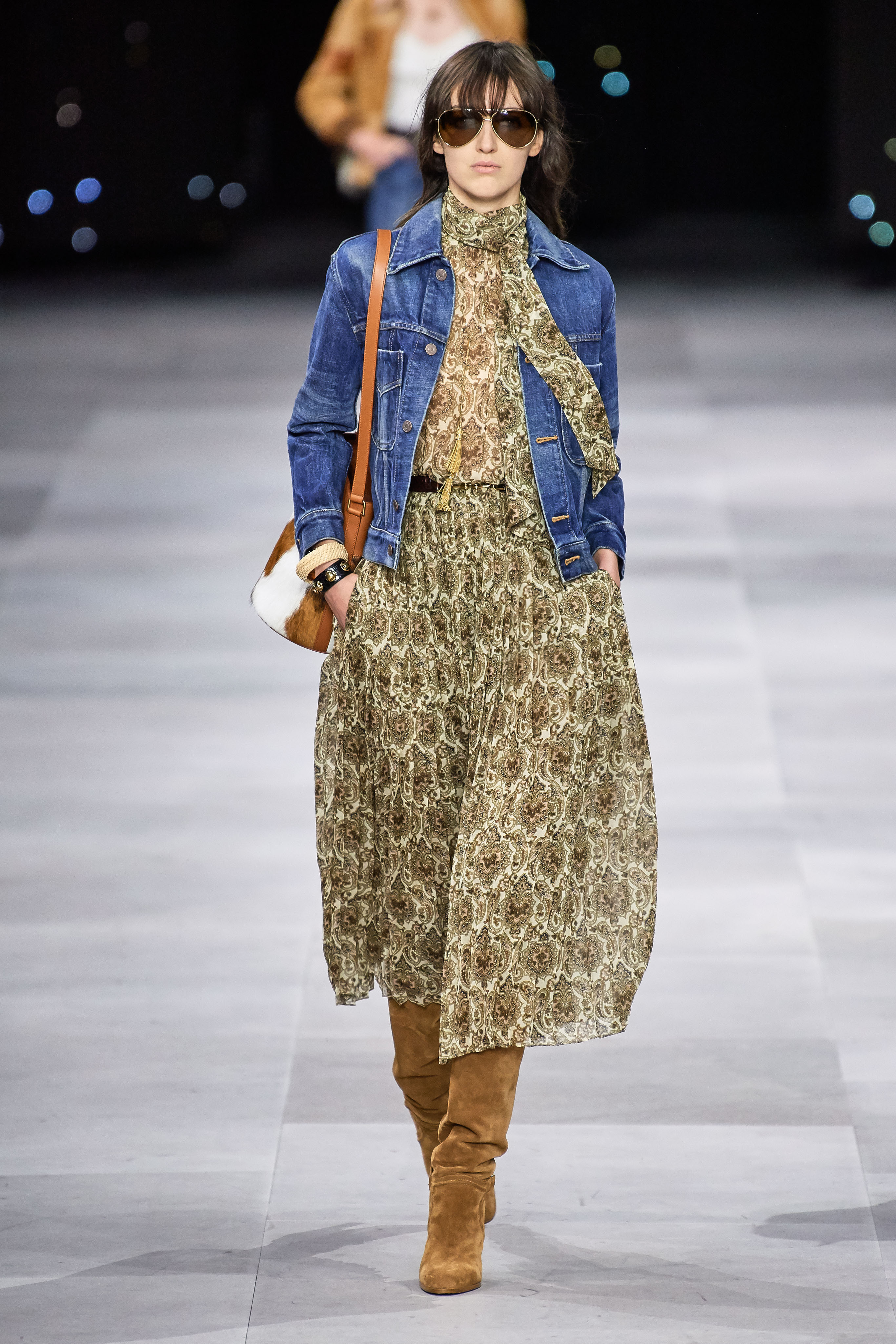 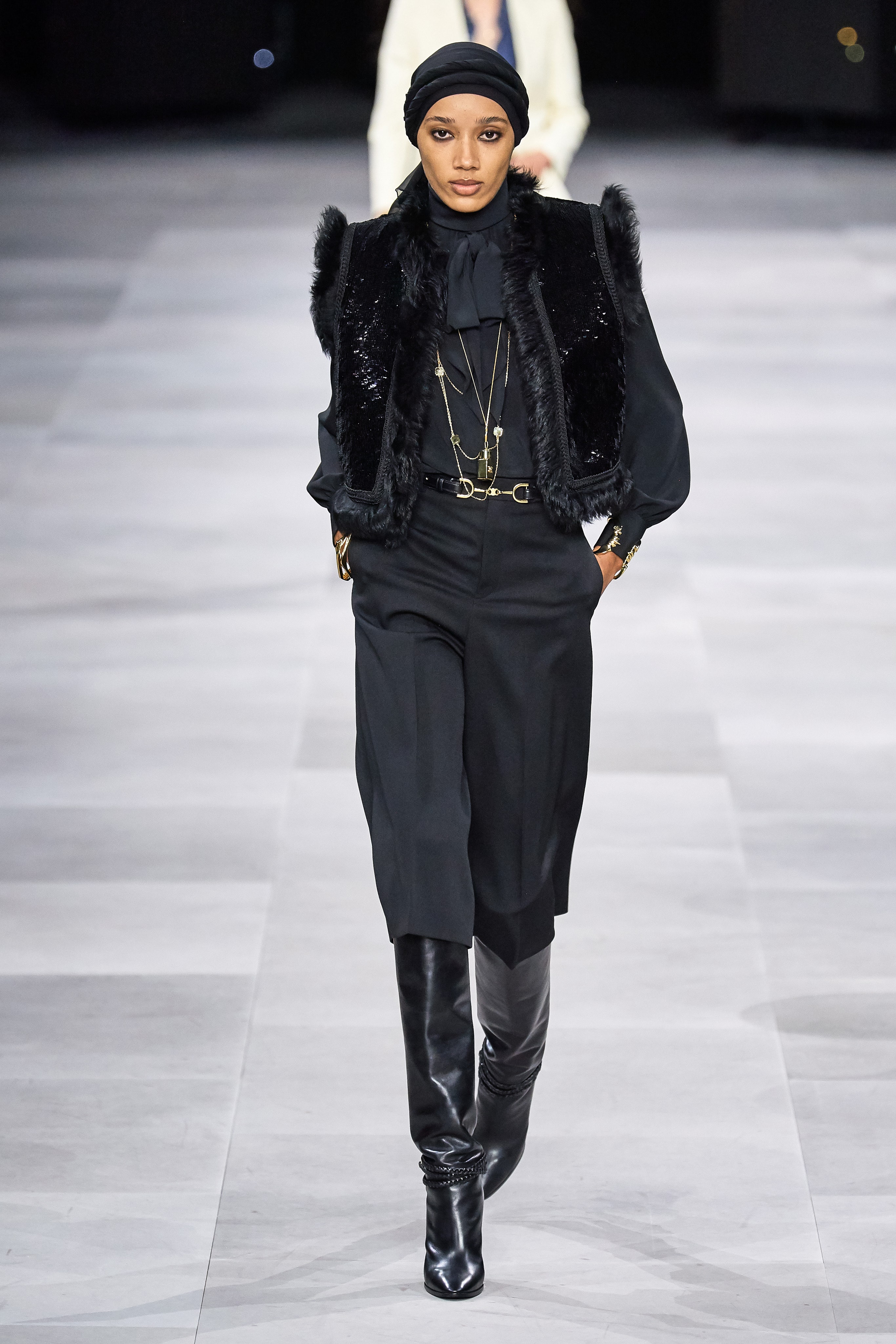 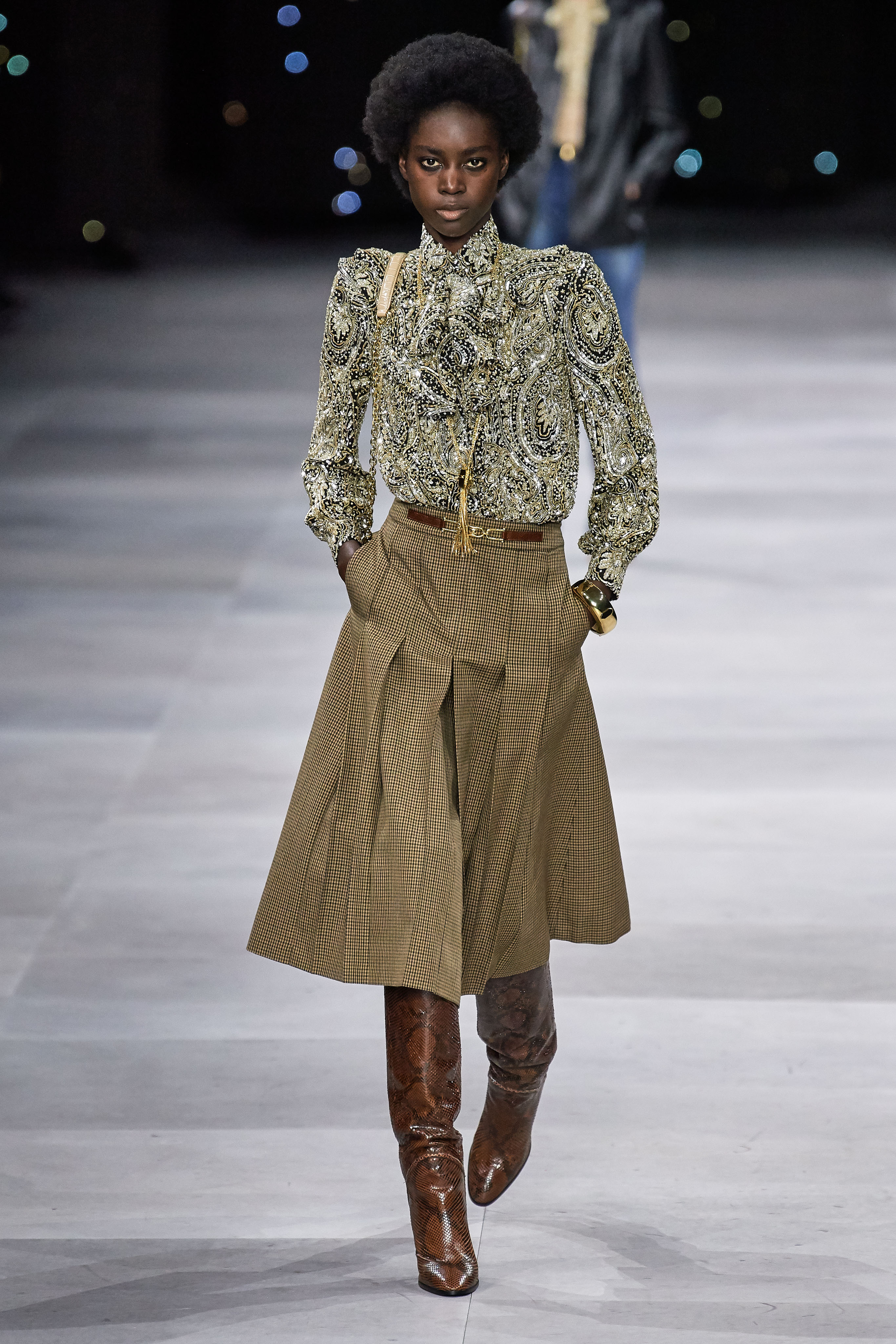 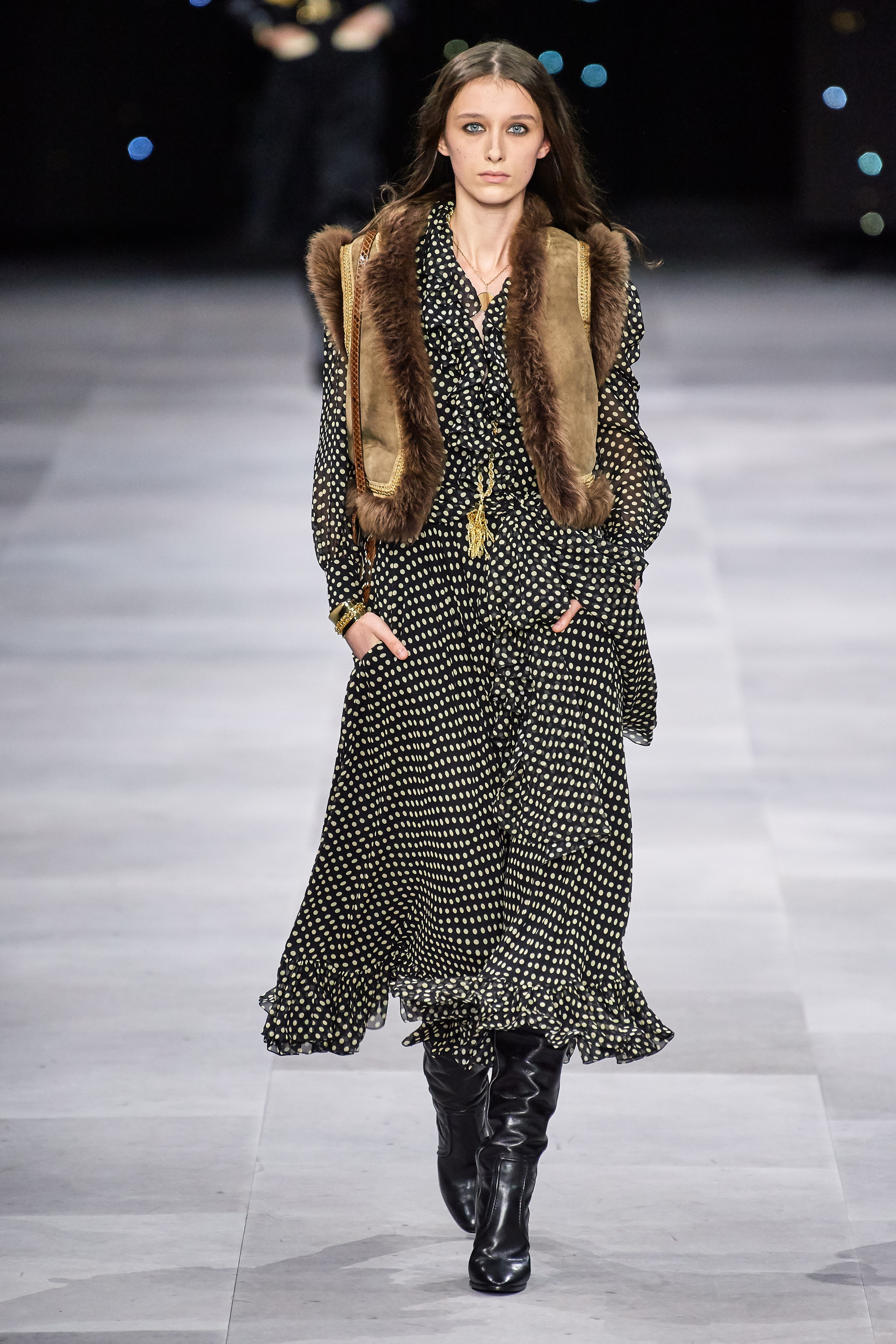 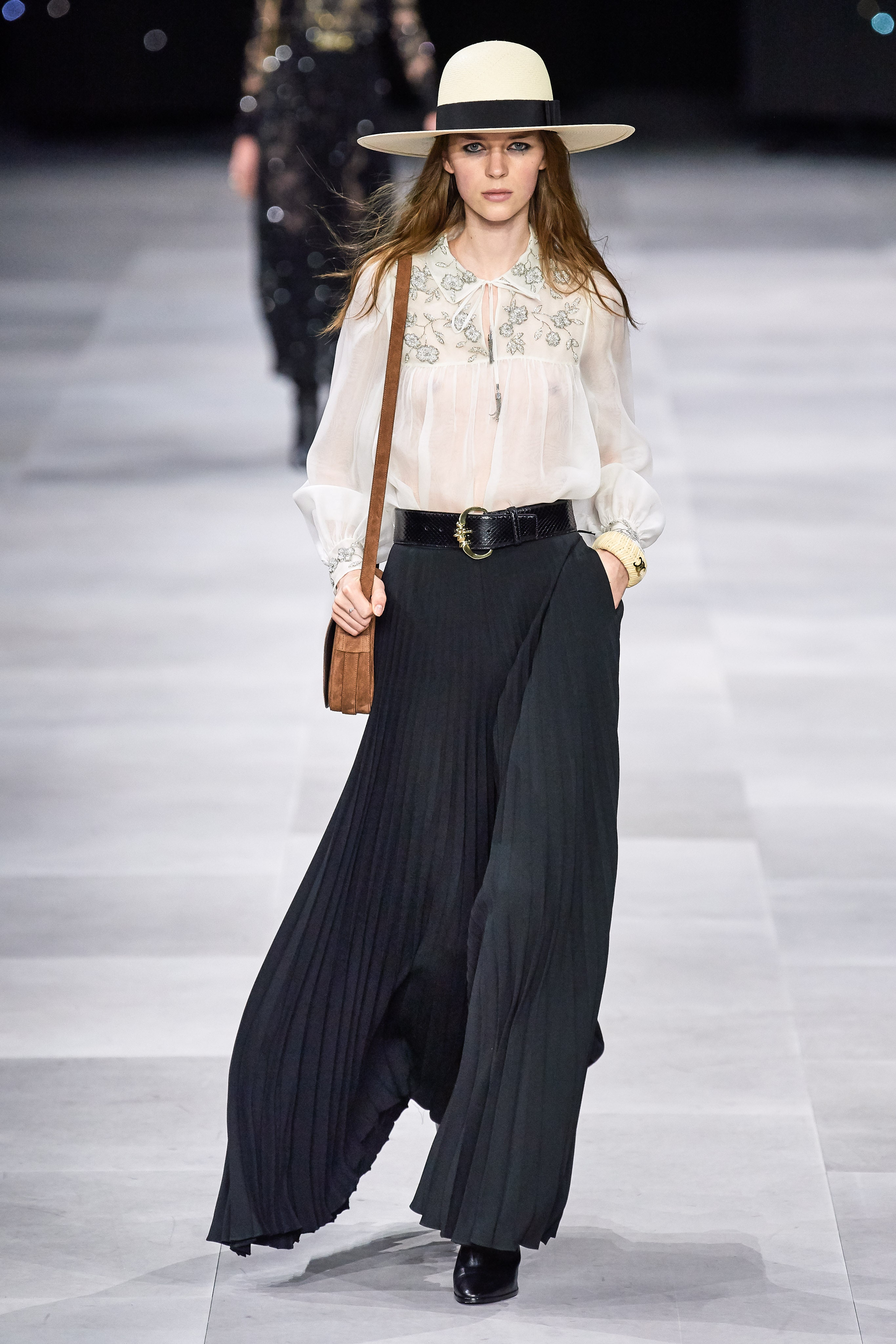 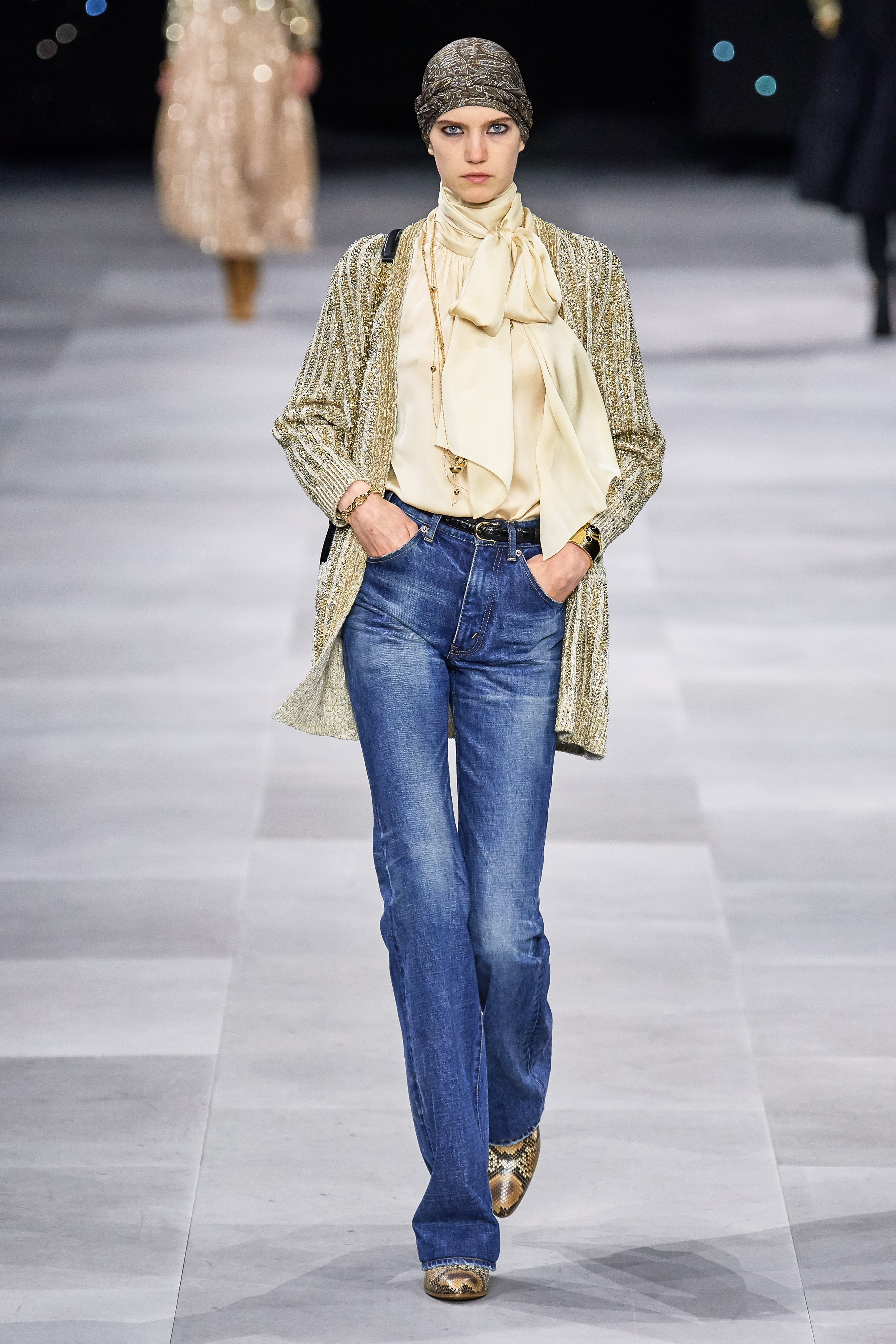 The problem with this collection is that Slimane might have been too accurate for this to feel like anything new or innovative in any way. Finding inspiration in an era and copying it are two different things. This collection was large, clocking in a little over 60 looks, but not nearly the behemoth we’ve seen a few other times this season. Still, halfway through the show I was unable to stifle a yawn and was checking my watch to see when the whole thing might be over. This felt more like a historic costume collection from my past rather than an innovative look for next spring.

On the plus side, comfort is a really big seller at the moment so the collection is going to do well in stores. For reasons that escape reason, some people enjoy spending way too much money for a pair of jeans. Slimane’s been at Celine a full year now, though, and has yet to really show off his designing chops. We know the creativity is in there, somewhere. Why is he so reluctant and make this label a bit more original? I guess we’ll wait a while longer.