Wednesday is the new Thursday at New York Fashion Week this season. The official schedule was shortened by a day due to the high number of major designers who fled town for London and Paris this season. Whether the calendar will go back to its full length in February remains to be seen. If fashion houses are able to offset the costs of shipping everything to Europe with higher sales return, this could be a new norm. Today, though, it just doesn’t feel right. Something’s off. There’s a lot of technology not working. Subway trains were running more late than usual for the middle of the week. Folks are grumpy.

Once upon a time, as recently as three years ago, the last day of NYFW was the home of the proverbial top dogs. Calvin Klein typically showed at 10:00 AM, with Ralph Lauren at 1:00 PM and Marc Jacobs finishing things off at 6:00 PM sharp. Don’t be late or you’ll miss it. Things have changed, though. Raf Simons has Calvin Klein showing much earlier in the week. Ralph Lauren has found the last evening at 7:00 to work better for him. Even Marc Jacobs experimented with a 4:00 PM time slot last season. He’s back at 6:00 this season, but in the opinion of many, myself included, his show is pretty much the only reason for staying in New York on the last day. Go ahead and jump over to London. There’s not really anything to see here.

Not that there won’t always be people who try, mind you. Opportunist-in-chief, Michael Kors, has certainly tried to wedge himself into that empty space on the morning of NYFW’s last day. It’s a nice place to be, if you stop and think about it. There’s no real competition that morning. There are still plenty of foreign press and buyers wandering around, looking for something to do. This season, especially, since everyone has tomorrow available for travel, there is a sort of ambivalent sense of, “Hey, we don’t have anything better to do, let’s go see that Michael Kors thing.”

That’s really the only way I can explain how Kors manages to consistently fill the seats for his show. Well, that boredom combined with the fact that all one has to do is say, “Free NYFW tickets” and one instantly has a line. New York is nothing if not full of people looking for a break anywhere they can get it. I suppose he still carries a touch of Hollywood recognition from his days on Project Runway as well, but Zac Posen has done such a wonderful job replacing him on that show that I can’t imagine there are too many fans still hanging on there.

Kors frustrates me because he is very much a copycat yet, being the opportunist he is, often hypes himself into getting more credit than the originator of whatever he’s doing. Take, for example, the YouTube series he started this season called Kors Commute, where he hauls someone into the back seat of his limousine for a ride into Manhattan while he video tapes their chat. Think Carpool Karaoke without the karaoke—or the charm of James Corden. He’s also copied Burberry by adding live music to his shows the past few seasons. This time around, it was pop musician Sara Bareilles, whose talents are under-appreciated because she’s actually a musician, not a dancing drama queen. If Twitter comments are any judge, more people enjoyed listening to Sarah than they did watching the fashion show.

Sure, there was a fashion show here. Once more, though, it was disappointing as Kors seems totally out of touch with everything else going on in fashion this season. The problem is not so much that he’s not a trend chaser (there wasn’t a spot of yellow as far as the eye could see), one can give him credit for that much, but in place of those trends he served up a collection that was confusing, boorish, and cheap-looking. Never mind that the simulated boardwalk on which models strode looked like the exact same boardwalk salvaged from Tommy Hilfiger’s Fall 2016 set. We’ll even look past the cheap plastic leis; you know, the kind one buys by the dozen at the neighborhood party store. There was an overriding cheapness to this collection that reminded me more of something slapped together at the last minute by a design school student who had already spent all the money his parents sent him for that semester.

Take, for example, the horrific white flip-flops worn by the majority of models. Mind you, we’ve seen some very stylish flip-flops over the years; I’m not entirely opposed to them. What we saw this morning, though, looked like the super-cheap kind one picks up at the gas station in Fort Lauderdale because the strap broke on the ones you brought with you. If production costs on these is more than three cents per pair, someone got ripped off. Kors would do well to just give them away with any purchase.

Or perhaps we could talk about the beachcomber hats pressed down onto the heads of the first several models. Let’s see, who wears this kind of hat? Glamorous people who like looking good? Uhm, no. These hats are for the college student who had too much to drink last night, woke up in the hotel room of someone whose name they don’t remember, and haven’t had time yet to wash someone’s vomit from their hair. Don’t believe me? Here, take a look: 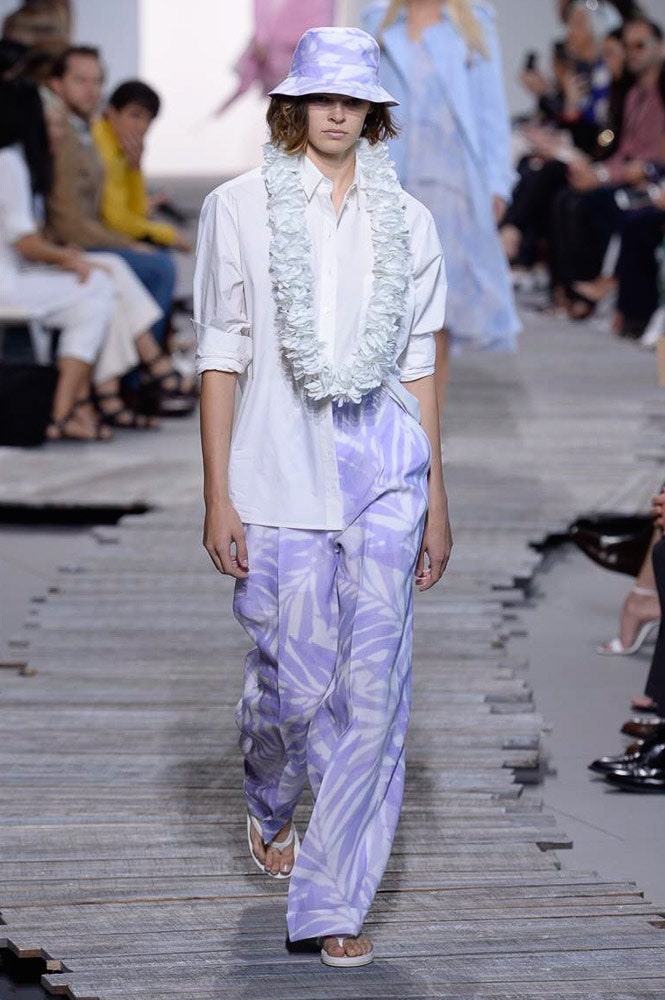 That was the second look down the runway, folks, and it didn’t get any better from there.

The palm print on pastels was the theme of the day. There were palm prints in all the soft colors except for that canary yellow that apparently the good folks at Pantone® declared the color of the season yesterday. The silhouettes are all full and loose fitting, allowing the wearer to channel their inner beach bum, which most of us have latently hiding somewhere in our youth. The problem is that most of us leave that beach bum behind when we graduate college, or around the age of 25 or so. This is a Spring Break in Florida type of look, if Florida manages to be open in time for Spring Break next year. The timing here may prove to be unfortunate.

So, Kors chose a loose, pastel, beach bum look for his collection. Okay. We’re going with that. Then, out of nowhere, he sends a sequined skirt down the runway. Jaws dropped. Not because the skirt was so amazing, but because it was so incredibly out of step and out of character with the rest of the collection. Well, maybe not totally out of step. Remember that morning after scenario I mentioned a moment ago? It could work with this look as well. 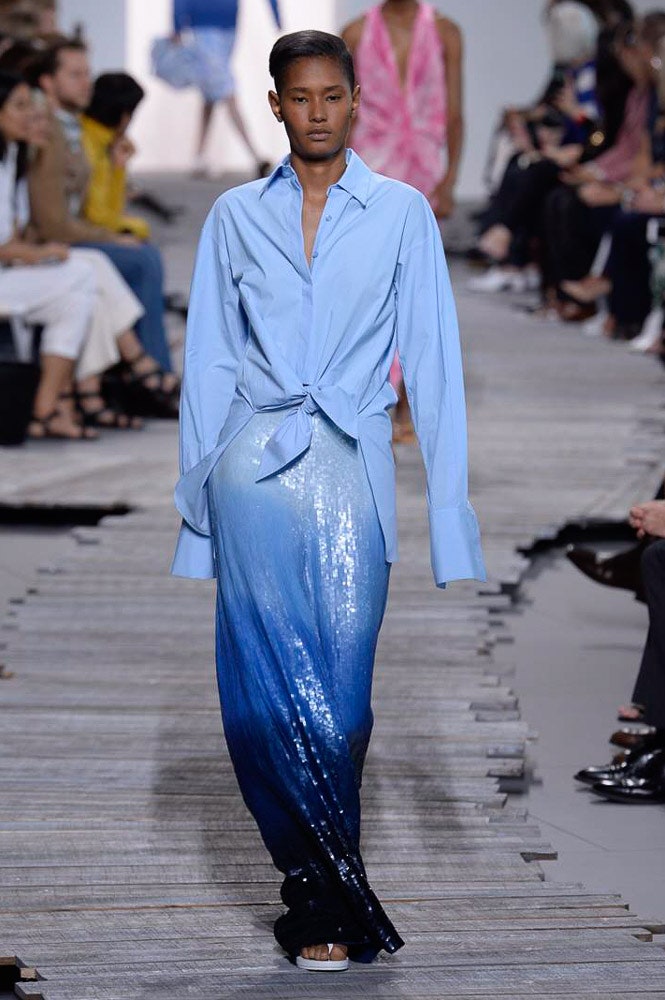 Seriously, can you think of any other reason for wearing that shirt with that skirt other than being hungover and wanting to get out the door as quickly as possible? Oh, and borrow someone’s cheap flip-flops on the way out, because you know she wasn’t wearing those when the evening started.

Going through the collection, there are some pinstripes and tie dye and cable knit and oversized men’s blazers, all the typical things a college student might toss on before exiting the hotel in search of a Waffle House for breakfast. At least the look was consistent for the most part.

But then, toward the end, for some totally inexplicable reason, he added some evening wear. Yet again, it was totally out of step with the rest of the collection. What’s interesting is that these are the pieces with which he chose to dress Bella Hadid and Kendall Jenner, among other more expensive models. One has to wonder if the wardrobe choice was part of the deal in convincing the models to walk in this train wreck. 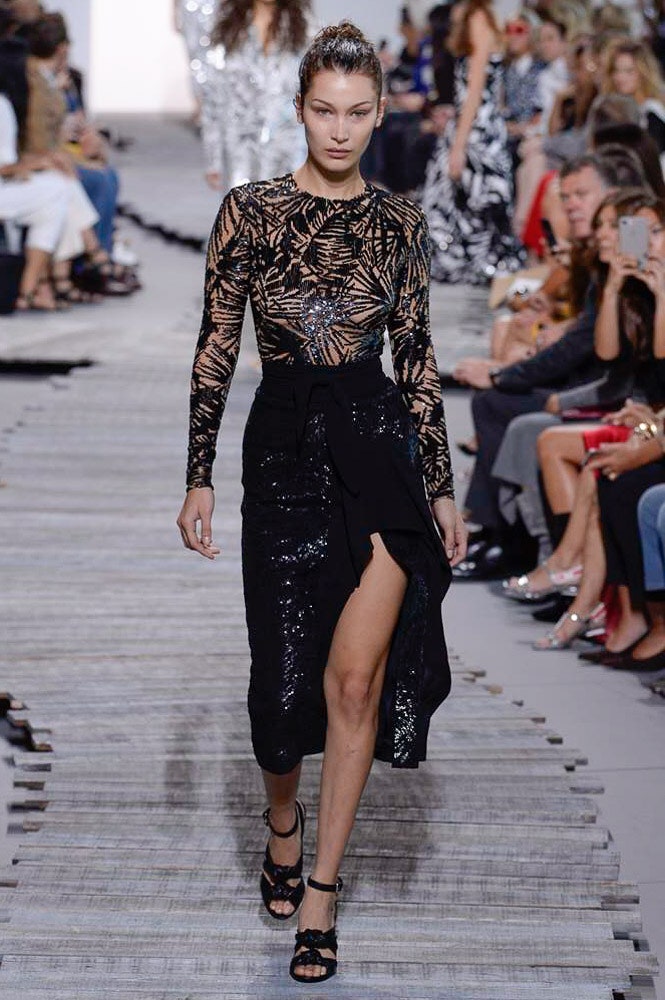 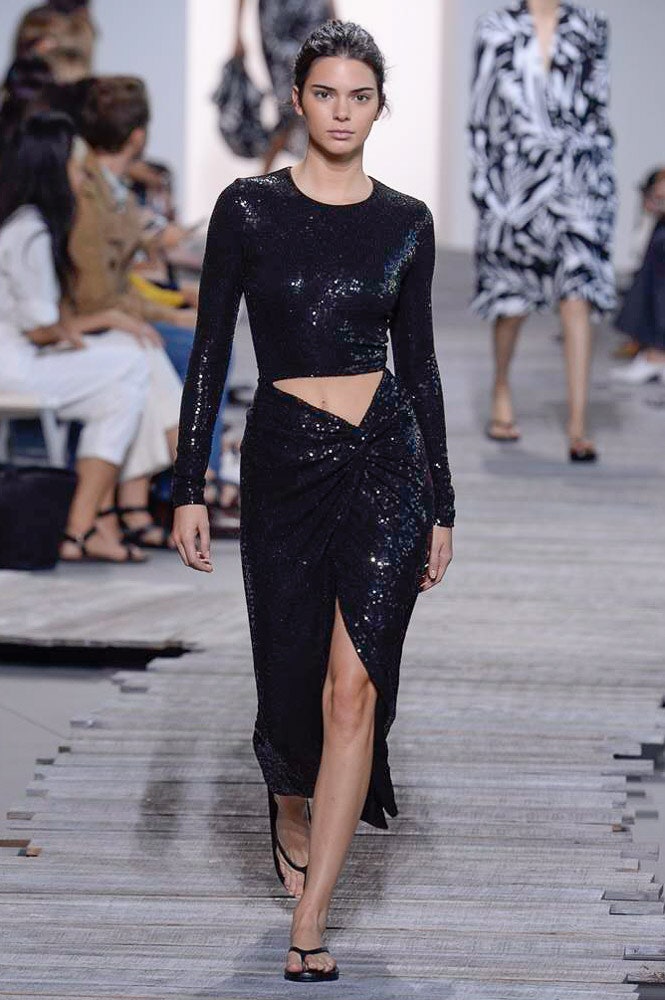 This entire NYFW season has felt off in so many different ways. We’ve seen some bizarre, tasteless,  and inappropriate things come down various runways. Yet, there have been enough shows of decent quality to have made it worth covering. We’ll still have more to say about the week as a whole later.

If anyone was looking toward Michael Kors to help put some polish on a slightly tarnished week, however, they came to the wrong show. This was sloppy, uncreative, unoriginal, and boorish.

Except for Sara. I could listen to Sara all day. In fact, I think I will. I’ll have to try to not associate her voice with Michael Kors, though. I don’t want to spend the rest of the day with a queasy stomach.

0 replies on “NYFW: Michael Kors Seems Out Of Touch With Spring/Summer 2018”