Every season I have this internal argument with myself whether to pay any attention to Michael Kors. On one hand, I know without looking what he’s going to send down the runway: tan. He could cover a desert with all the tan products he produces. He occasionally ventures out, but not with enough frequency to warrant any level of excitement.

At the same time, Kors has a certain popularity—a second-hand popularity driven by that set of twenty-something starlets whose Instagram following wants to wear everything they wear. As long as Kors keeps playing to that ever-revolving group of starlets he’s going to remain part of the American fashion conversation, even when no one is exactly sure why.

This season’s autumn/winter collection fits right within that pattern, opening with a tan trench with convenient openings in the side so you can just sling it over your shoulder if you’re too cool to actually bother putting your arms through the sleeves. I realize this is a popular look in the movies and such, but in real life, unless you have the shoulders of a linebacker, it doesn’t work well. The coat doesn’t stay put. Oh, and given the way the ensemble was styled, with a button-down dress shirt unbuttoned, when the coat does inevitably slide off your shoulders it’s likely going to leave something exposed that one may not have intended to let everyone see. The look has the potential to go from sexy to flasher in 0.35 seconds. 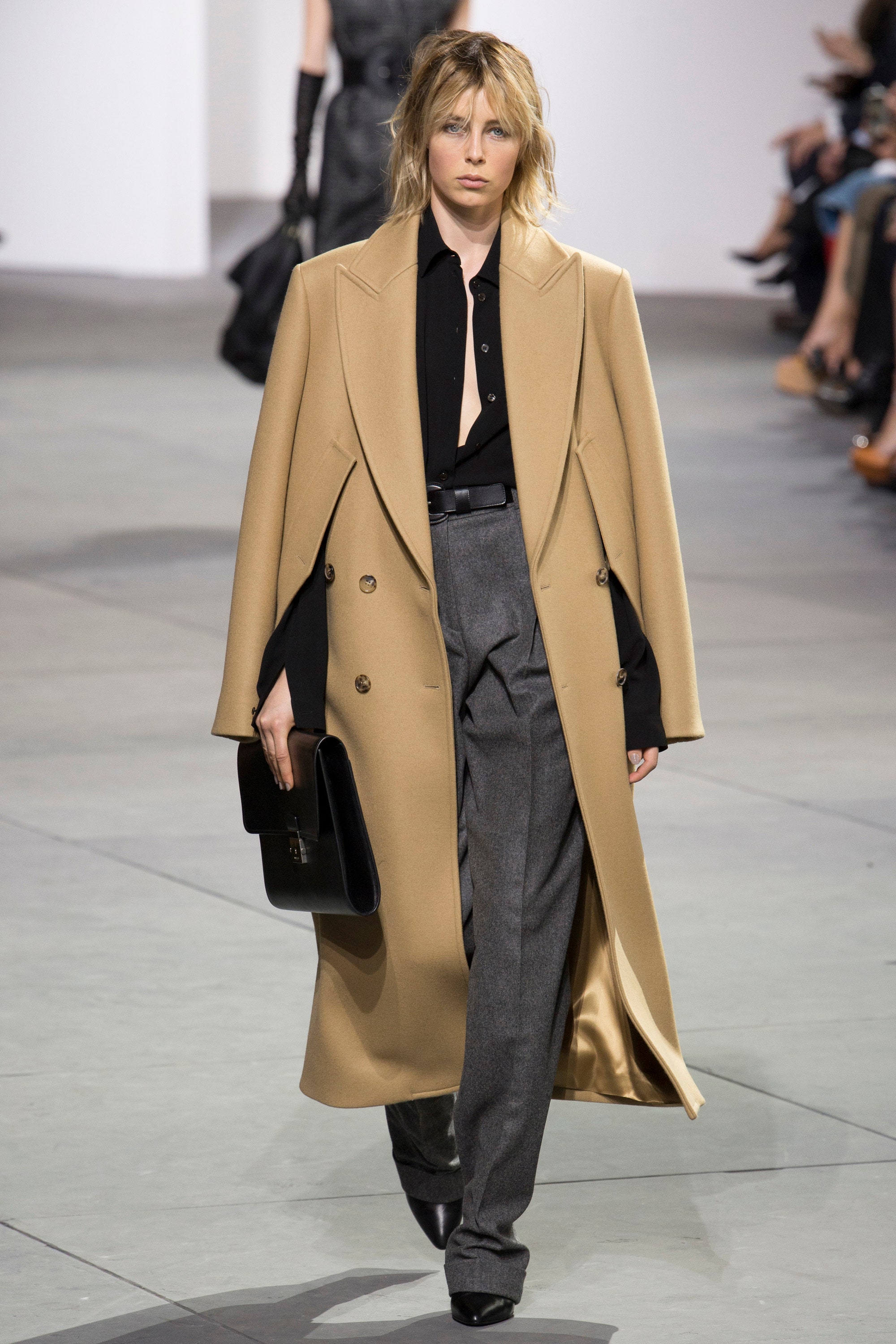 I will give Kors a little credit for making an attempt at diversity this season. Michael’s not the most politically active person in the fashion world, but he does pay attention enough to know that size diversity is an issue that’s strong with his core customer base. Putting Ashley Graham on the runway was an important addition and note that the ensemble she’s wearing is straightforward and attractive without any level of complexity. If Kors were to actually pay more attention to this part of the market he would almost certainly see his profit line back up in a comfortable range. Unfortunately, this is the only plus-size appearance in the parade. 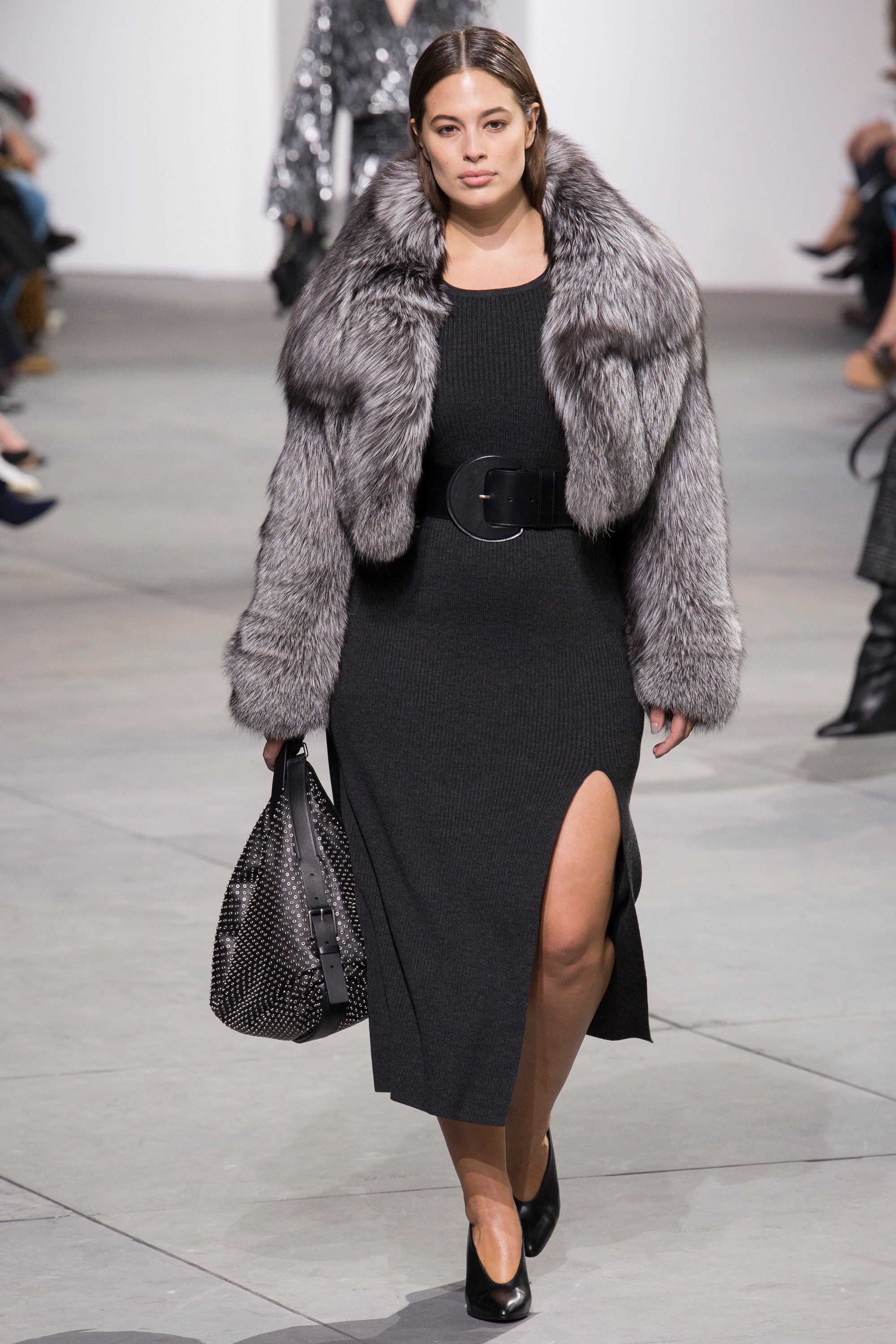 Like almost everyone else, Kors plays to the trend of going high up the neck and a couple of times took it even further right on up to the nose. While this may sound silly to anyone who begins to perspire if they spend more than 15 seconds in an overcoat, there are a significant number of women who are going to love these looks. In fact, I’m sure most everyone knows someone who would practically live in the look below: 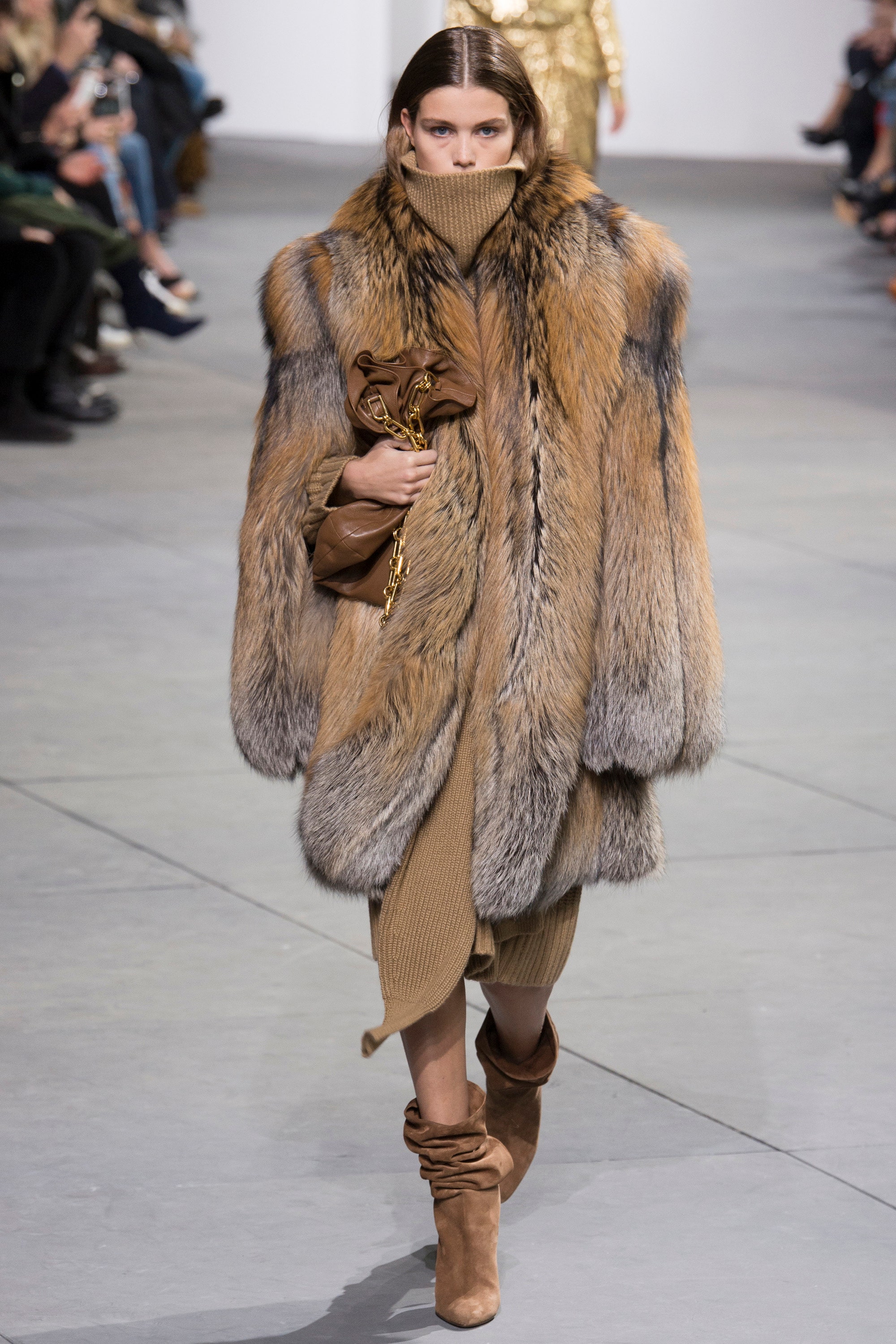 At the same time, however, as strange as it might look to some of us, we all probably know someone who has difficulty regulating their body temperature. I’m just going to assume that Kors had those people in mind when he sketched this look: 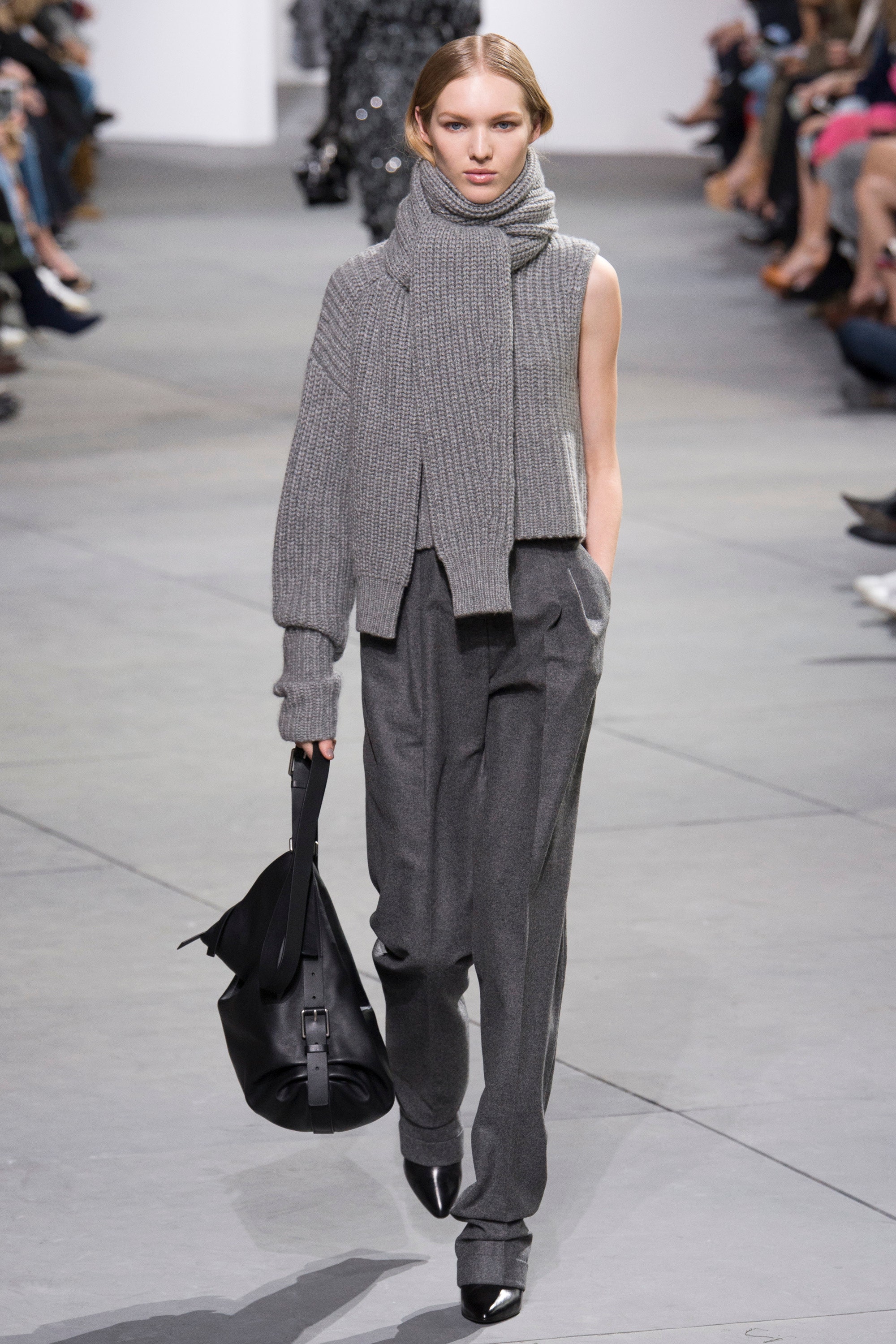 He creates similar looks throughout the collection by adding matching arm warmers to short-sleeved tops. He also has a thing for opera gloves this season and there’s a part of me that can’t help but wonder if he added that touch after seeing them in Victoria Beckham’s show on Sunday. I might not feel that way if we had seen them in other shows, but Beckham is the only other designer (so far) who has really made significant use of the gloves and Kors’ styling with them felt rather forced. I’m willing to be wrong, but the look is suspicious.

Kors has this thing about wanting to stay out in front of technology. If ever virtual reality becomes wide-spread enough, I fully expect Kors to be the first designer to sign up for a VR show. He has streamed his show for several seasons and this season even streamed his show live on Twitter. What’s rather humorous is that prior to the shows Kors writes short, supposedly inspirational sayings across the screen. One of the things he wrote this morning was, “There are no rules anymore,” followed shortly by, “The seasons are gone.”

Now, with statements like that, you might think that he was going to give us plenty of short sleeves and short skirts. Nope. Nothing of the kind. Instead, he gives us this: 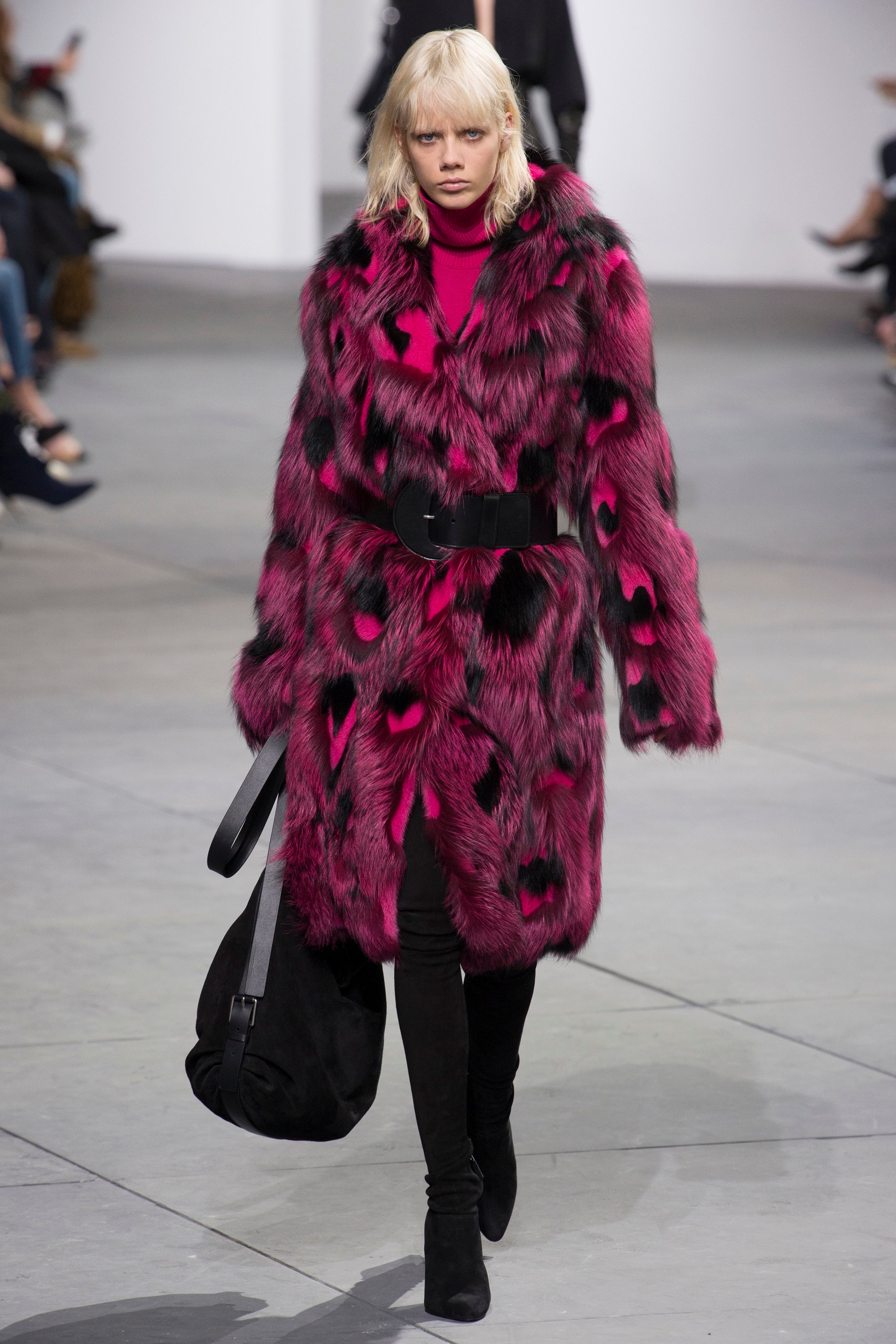 My first tendency was to name this look, “Coming to a bag lady near you,” but then I was told that would be an insult to bag ladies everywhere. I have no idea what kind of animals gave their lives for this mess, but they most certainly died in vain. This isn’t breaking rules. This is just cruelty to both the animal and anyone who has to look at the monstrosity.

Neither can one say that the seasons are gone with the vast majority of the collection looks something like this: 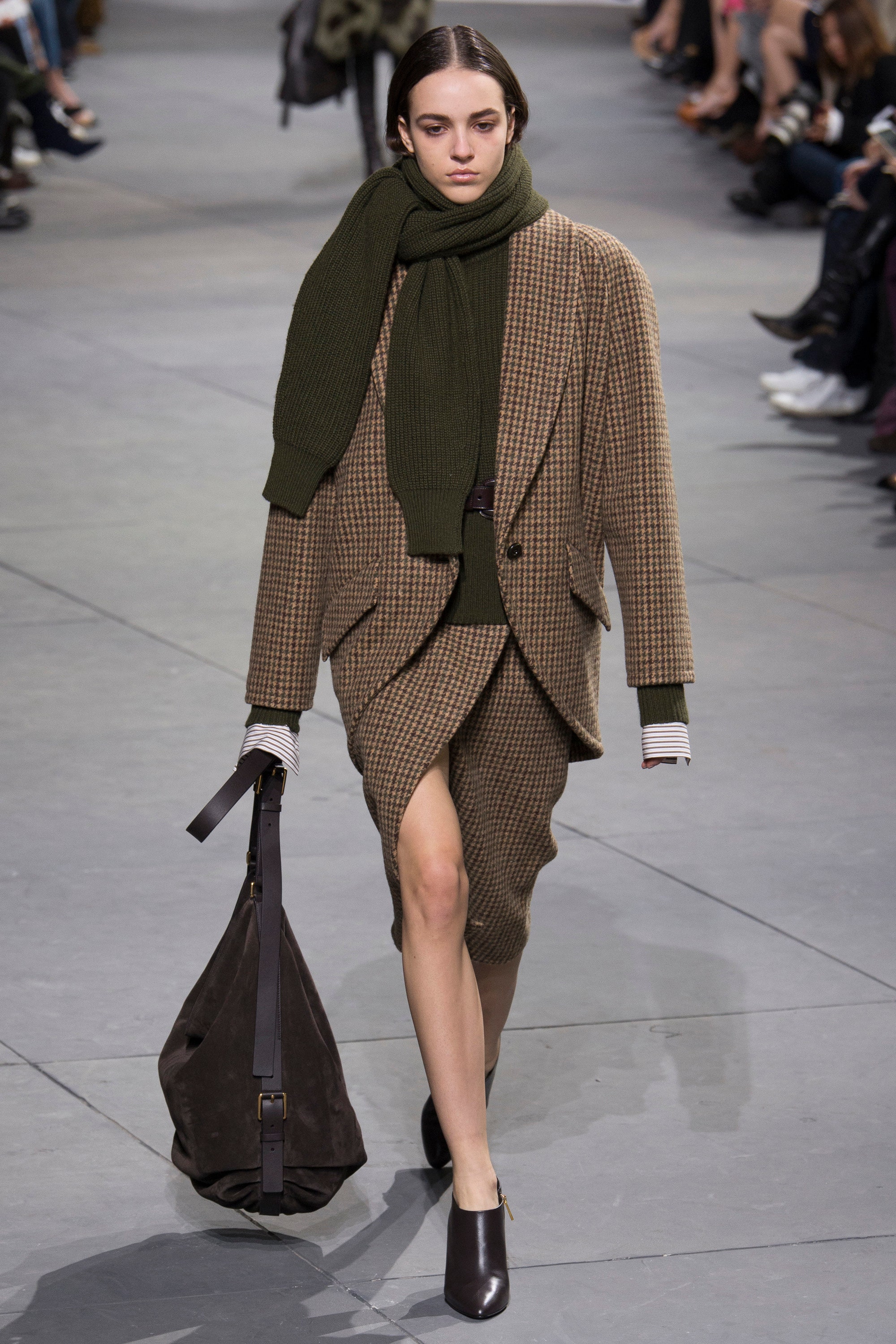 Am I the only one who things putting cuffs on a knit scarf to make it look like a sleeve is rather adolescent? Of course, that does fit Kor’s core audience so perhaps I shouldn’t be surprised.

There was even a moment of twinning in this collection and it almost works. In fact, he might have gotten away with it had he not put them next to each other on the runway. The woman’s look is one of the best from the entire collection. The draping on this piece is magnificent and for all the monochrome looks in this collection, this one actually works extremely well. 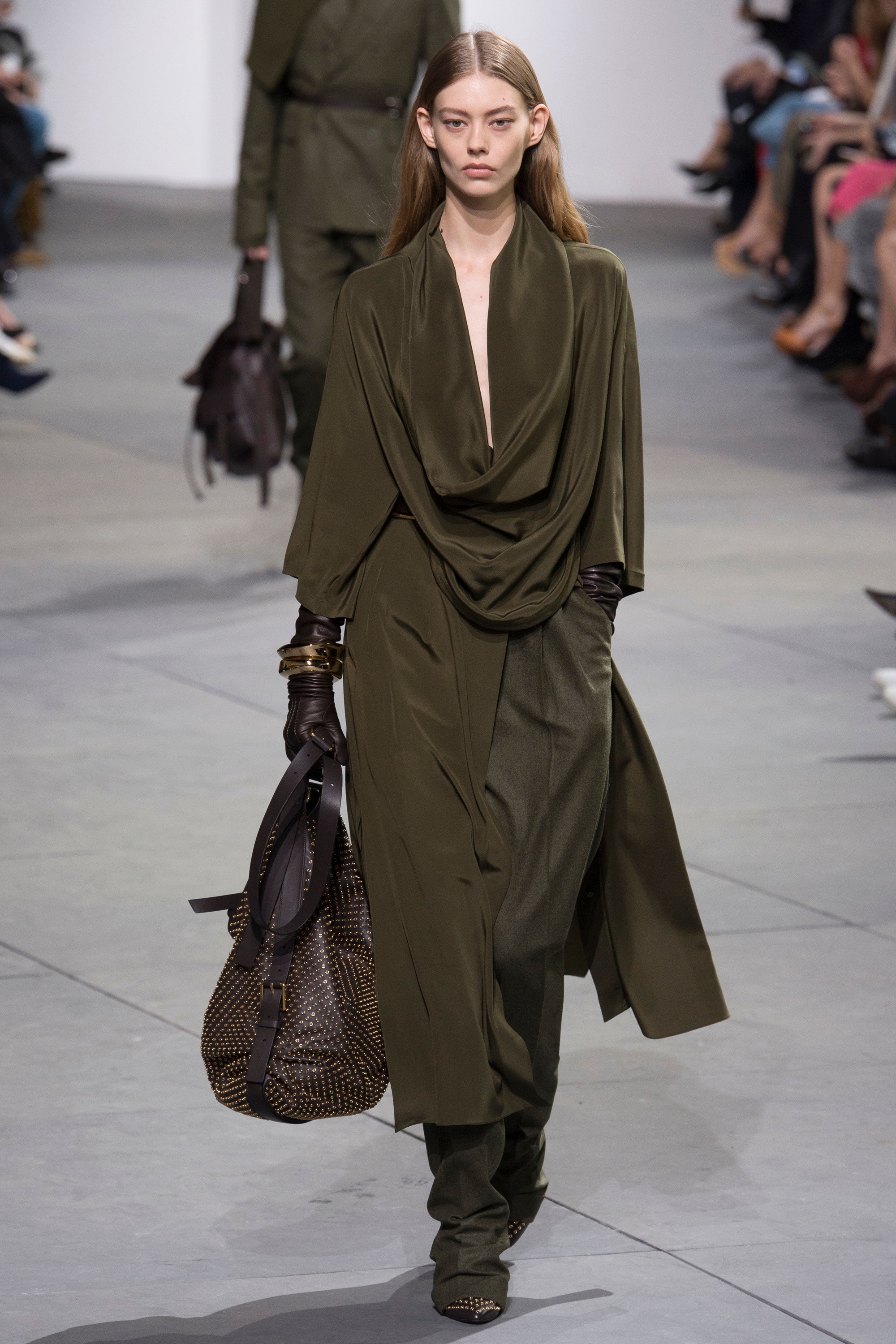 Then, for all the fraternal twins out there, he follows immediately with the matching men’s look in exactly the same color: 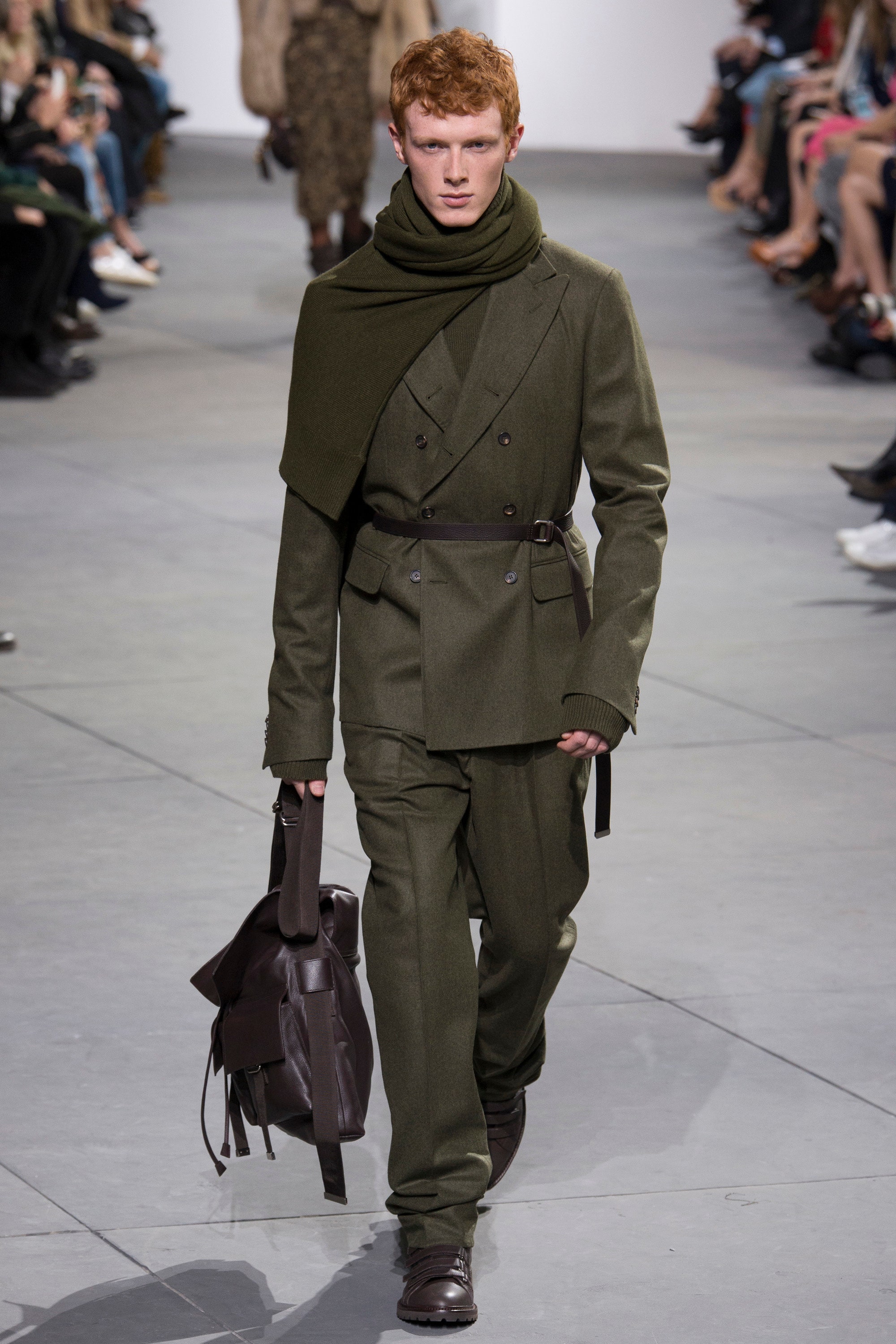 The two look so perfect together that it’s almost a little bit creepy seeing them walk past. Still, if one were, for example, looking for matching St. Patrick’s Day outfits, there you go. You’re all set.

Part of the reason Michael Kors is popular within the group that loves his clothes is that his designs are safe. There are no real surprises. Nothing is outside the bounds of good taste except for those furs. He has a leather skirt in the mix here that is impressive even for people who don’t normally get into leather: 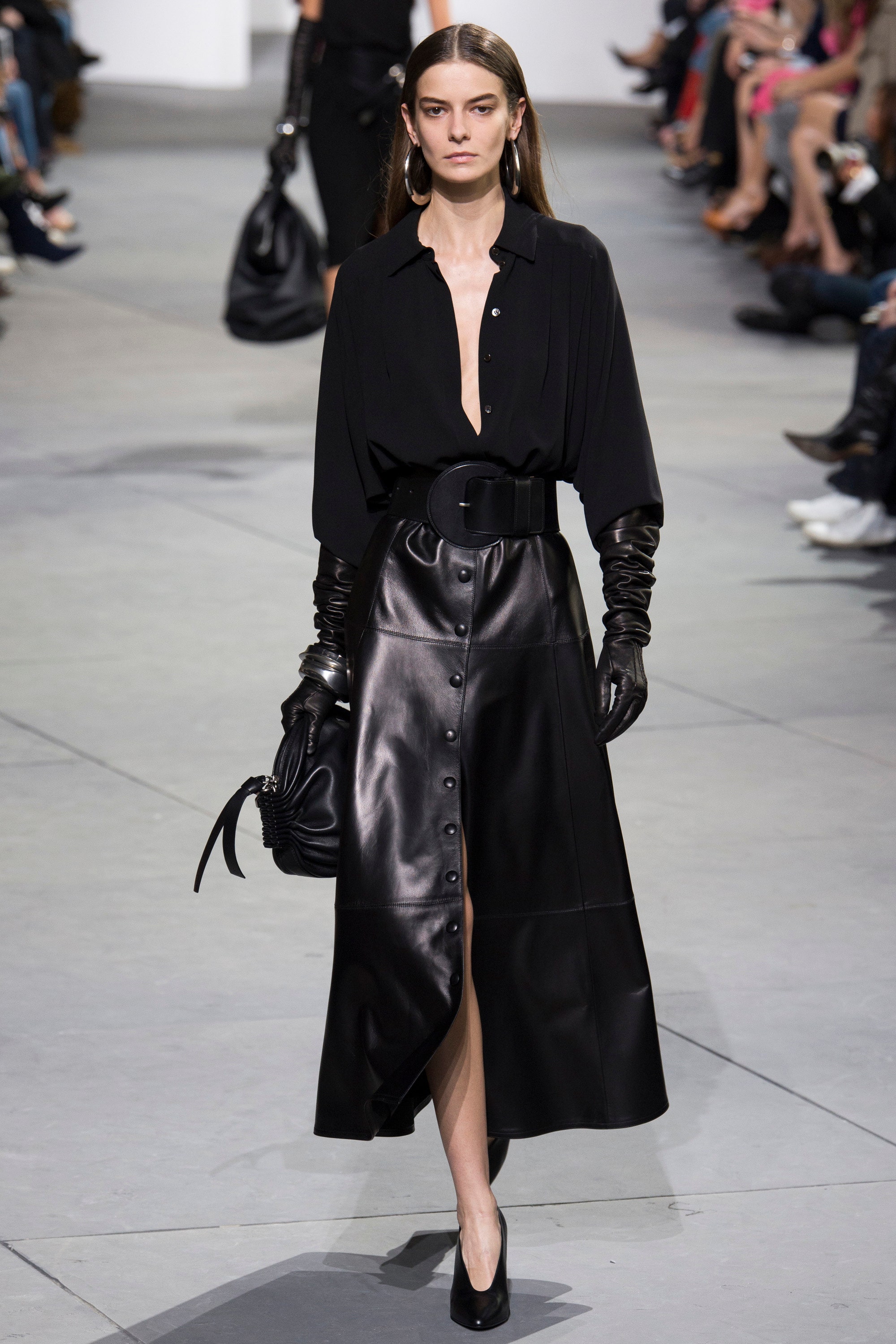 There’s more to that skirt than one sees in the picture so you’ll just have to trust me on this one; that skirt is worth the effort of driving to a mall and trying on.

Where Kors really lost me, though, was the last three looks that jumped on a fringe trend that left the station two seasons ago. This isn’t small fringe, either. This is the really long, impossible-to-keep-untangled-in-real-life kind of fringe. Sure, it looks cool out on a dance floor, perhaps (provided you have the moves to make the fringe work for you), but the moment you stop moving, they’re tangled. The moment you sit down, the fringe tangles more. Someone brushes past you and the fringe tangles. And yes, your dry cleaner is going to charge you more when you need the thing cleaned. This has to be one of the most impractical looks we’ve seen this season. 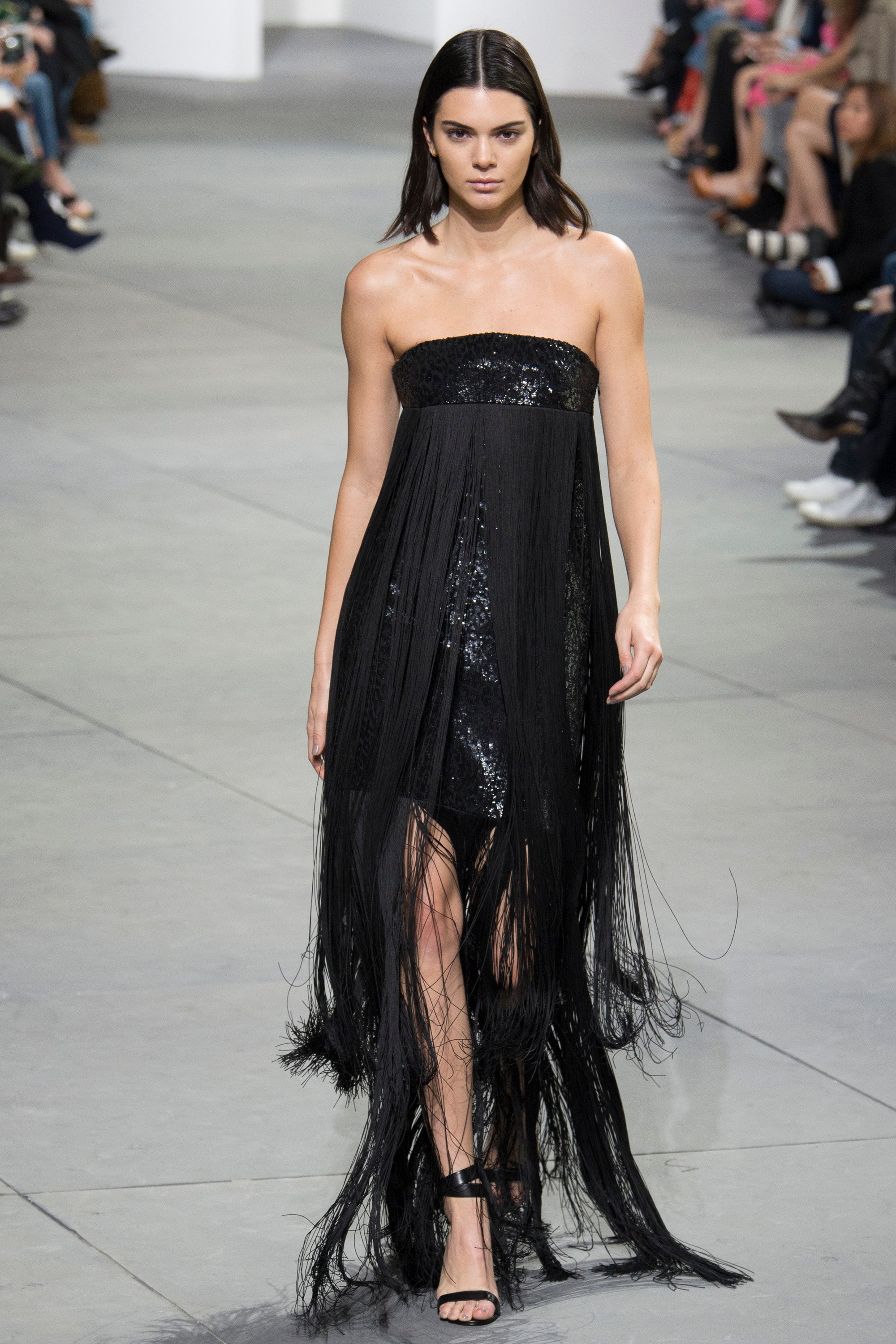 Granted, I’m sure Miss Jenner has people who can untangle the fringe for her. That’s fine for her. The rest of us, however, would go nuts just trying to keep something like this in wearable condition.

I now find myself at the end of yet another Michael Kors review wondering why I keep torturing myself in this way. The collection, overall, really isn’t bad, it’s just lacking anything exciting. Maybe because there’s nothing else going on at 10:00 on the penultimate day of NYFW. Kors has no competition in his time slot.

Maybe I should sit closer to the string orchestra who opened the show with the Eurythmic’s “Sweet Dreams (Are Made Of This).” The live music was exciting and quite well performed.

Or maybe I should have a twenty-something starlet seated next to me for more of an insider’s perspective. I’ll put in that request right away. I don’t expect many volunteers, though.