Michael Kors is only about a year older than I am so we have a lot of similar references even though we could not have possibly grown up in more opposite places. He grew up on the West side of New York back when it was still a rough, gritty place to be. I grew up looking at pictures, wishing I could be there, too. So, when Kors posted a set of short videos on his Instagram feed, a knot in my stomach told me exactly where he was going. First, there was the giant mirror ball rolling down the street. Then, there was the showgirl exiting an apartment building. Finally, in the most ridiculous way possible, a young man carrying a prop marijuana joint larger than he was joined Kors on the elevator. There was no question that the designer was headed back to the 70s.

For the sake of those too young to remember, the 70s can/should be divided up into three general segments: the hippie movement from ’70 to ’74, the disco era that consumed ’75 and ’76, and big hair and spandex from ’77 into the early ’80s. Over the past few years, we’ve seen plenty of references to the early ’70s and a few successful references to the late 70s, but for the most part everyone but Donatella Versace has stayed away from the mid-70s, and even Donatella had the good sense to not go full-on Disco. Michael Kors lacks that good sense.

There’s no way to treat this collection as anything other than pure camp. The designer says he was inspired by looking through his old high school yearbook. I get it. We’re at that age where many of us have had or soon will have our 40-year high school reunions. For most of us, though, we look back at photos from that period and laugh, properly embarrassed that we ever dared to dress like that. Kors, in contrast, looked at the pictures and found his fall collection. All he had to do was purchase the rights to the Studio 54 logo, which he did, and try to find a model from that period who doesn’t need oxygen to sit upright. He found one, Patti Hansen, who was a Studio 54 regular and is now married to Keith Richards. We assume the couple is hiding the fountain of youth in their home somewhere. Patti closed the show, which was a nice touch.

Any warm sentimentality ends there, however, as the collection quickly descends into costume territory. All the  crêpe de chine, bias cut dresses with Art Deco prints, feather boas, excessive fringe, and more ruffles than a bag of potato chips along with massive afros and extremely over-teased hair (I seriously hope most of those were wigs), give one the feeling that someone must be shooting a remake of Saturday Night Fever. I hate to be the one to tell you, Barry is the only one of the BeeGees still living and there can’t be a Disco comeback without the BeeGees. The pieces with the Studio 54 logo are cool but the club closed in 1986, well before any of the models other than Ms. Hansen were even born. With the exception of Hansen and her husband, whose longevity in inexplicable, everyone else who partied at Studio 54 is either dead or using a scooter to get around the grocery store. There might be a handful of wistful 40-somethings who find the “merch” fun, but for Kors target demographic the reference is meaningless, as is most of this collection. 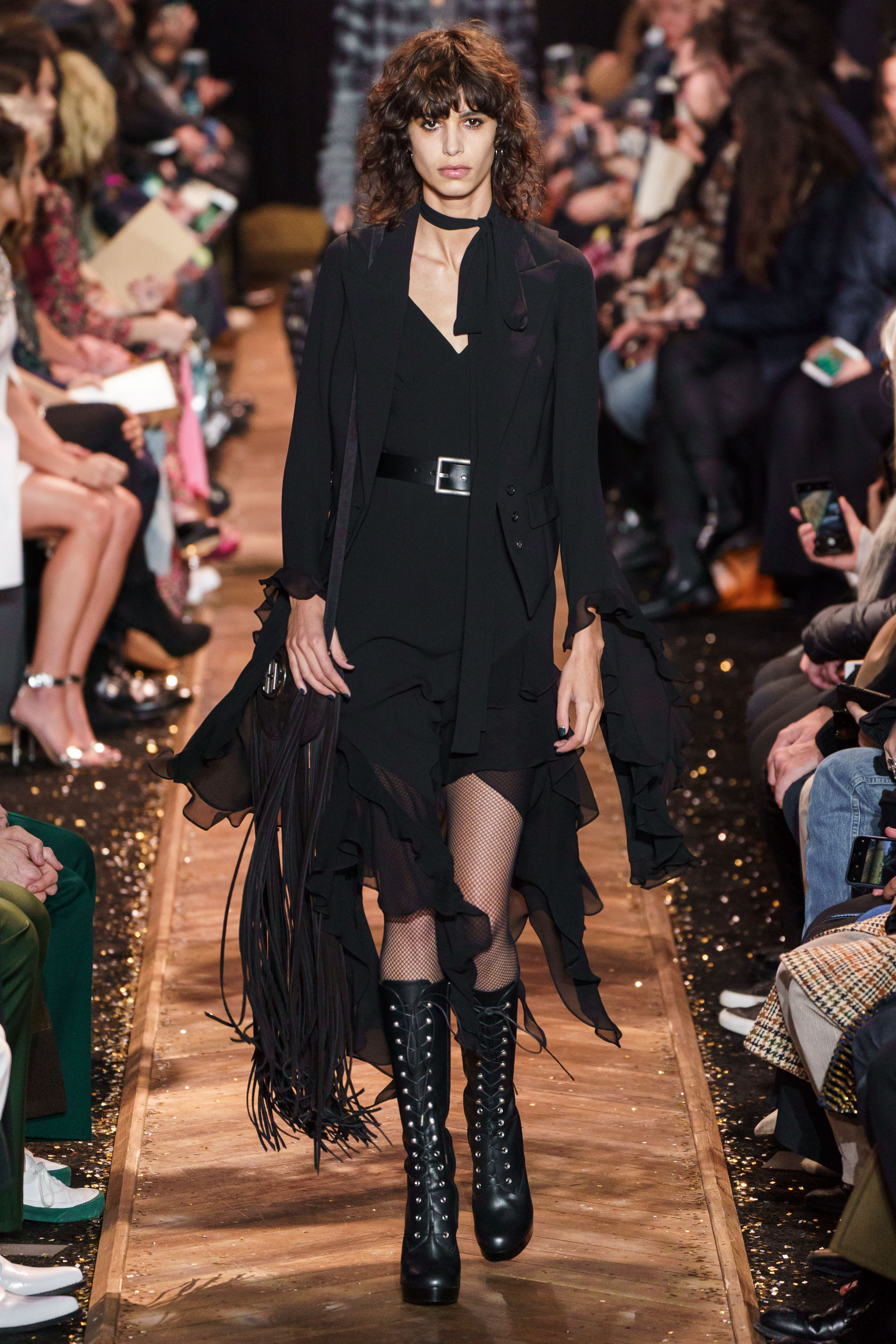 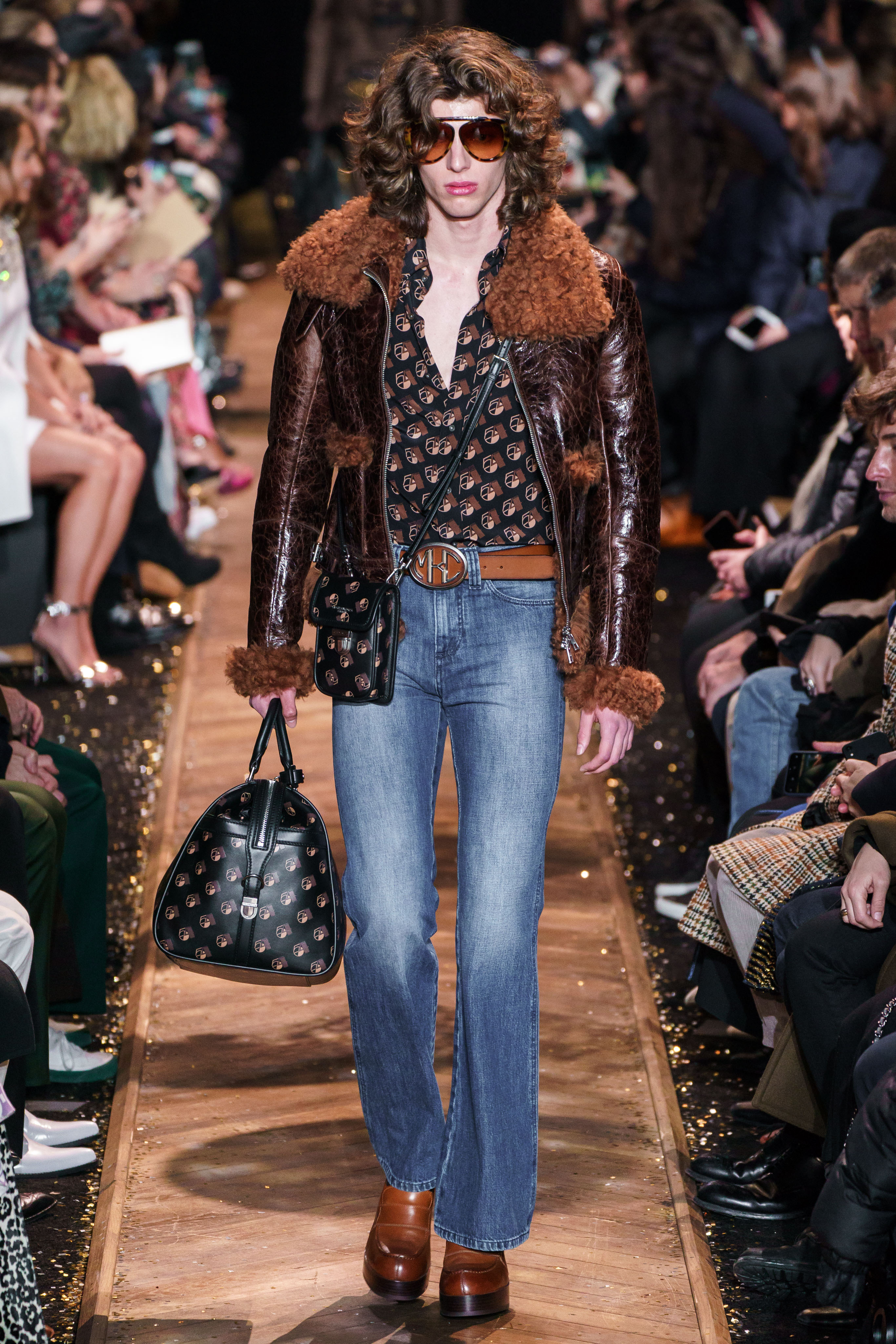 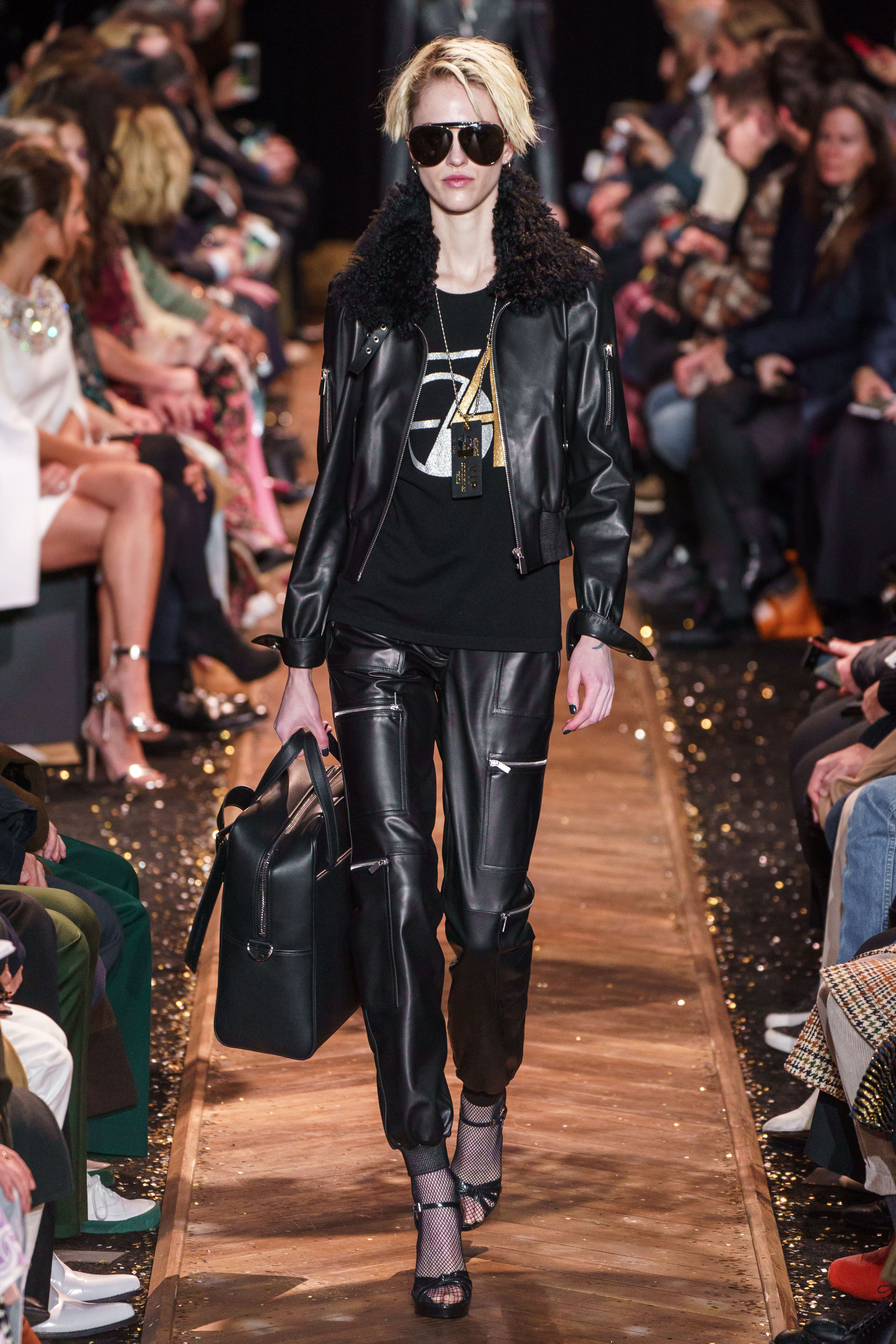 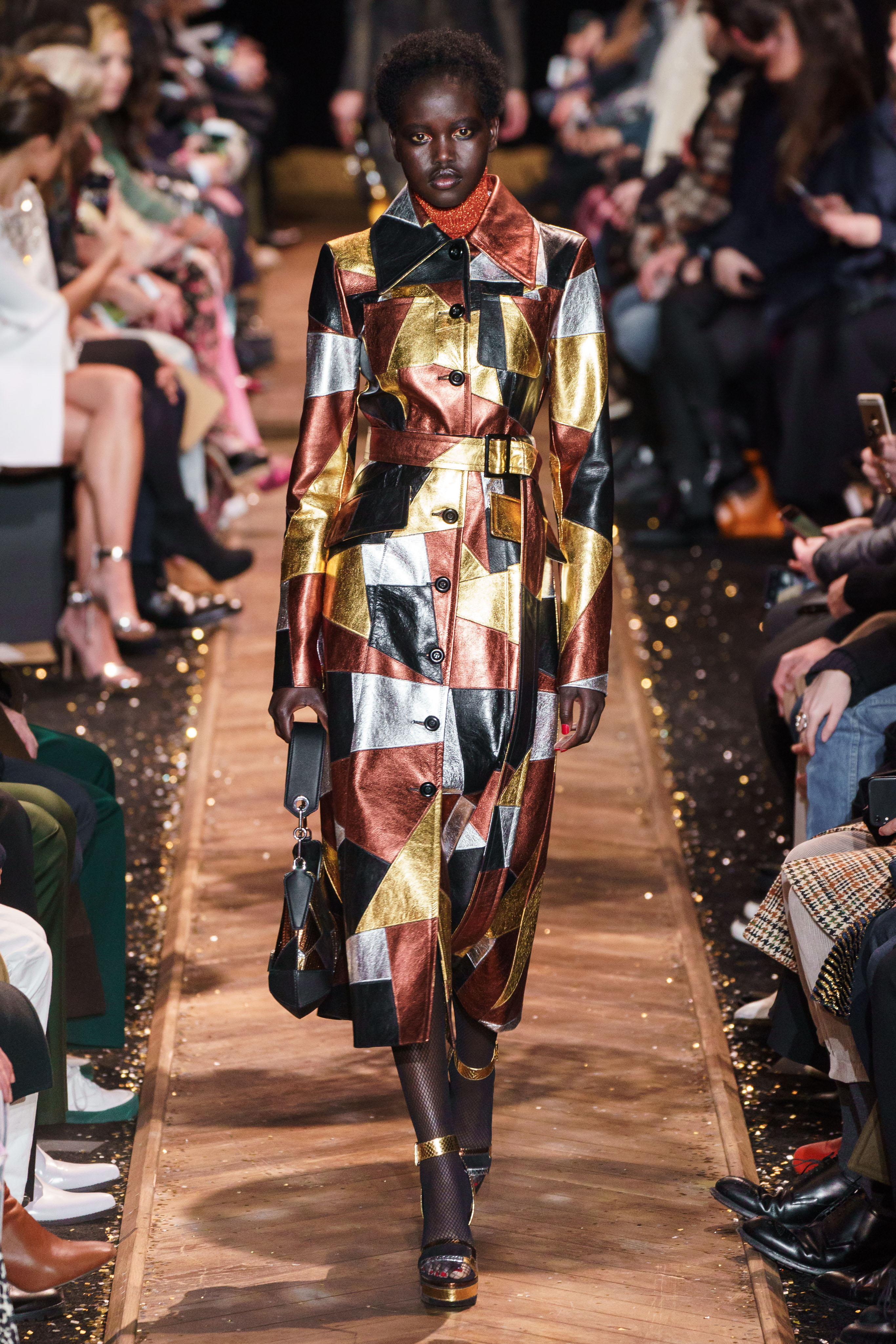 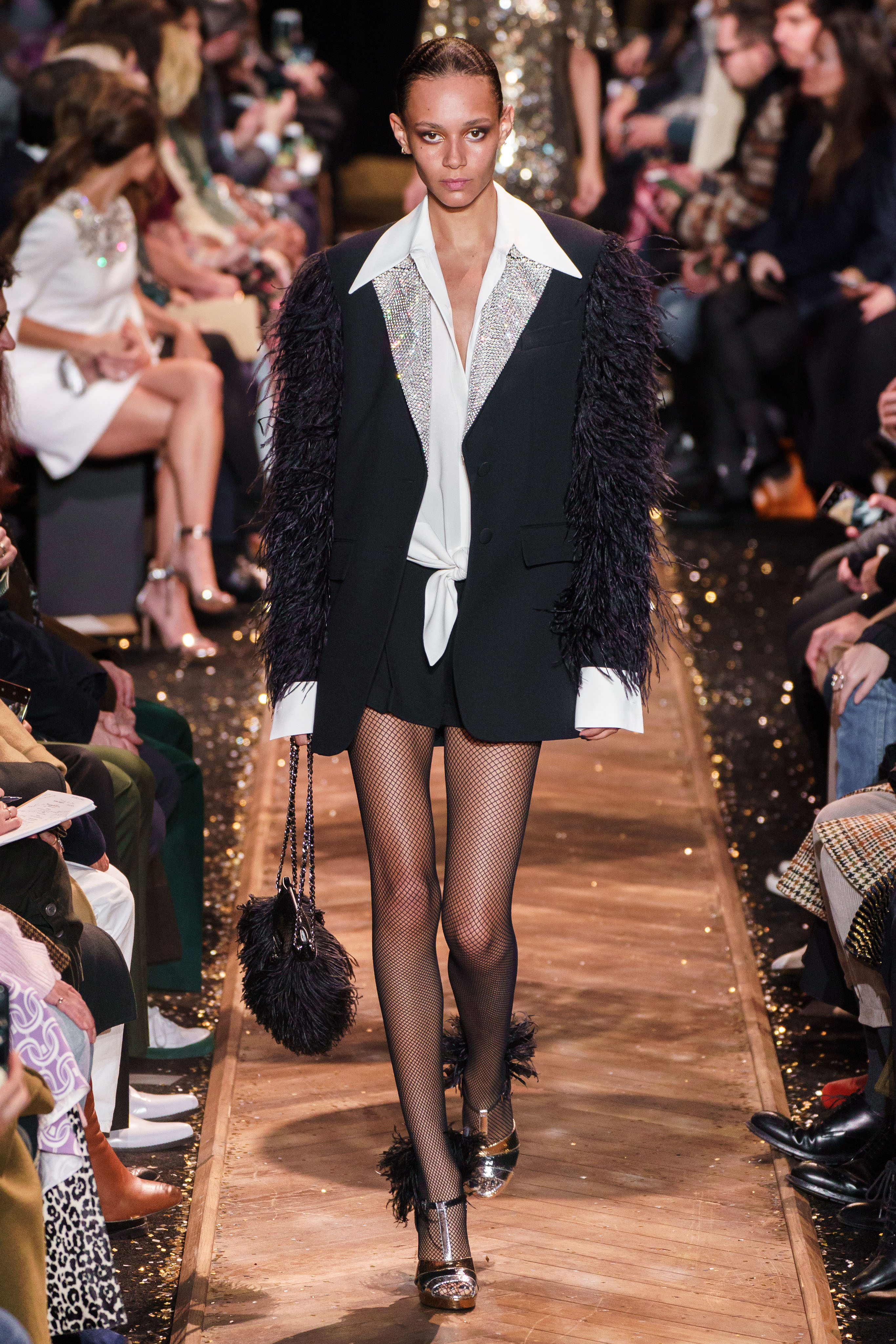 The only thing that was missing from this incredibly campy collection was John Travolta’s white suit. I can only imagine Kors couldn’t find that much white polyester. Other than that, this collection is a good example of how to embarrass one’s parents/grandparents.

Oh, but wait. You know how Kors has this thing about having live music at his shows? I was beginning to think that he’d skipped that this season, given that there aren’t many artists from that period still performing, but he found one who still is: Barry Manilow. I wanted to cry, not from joy, but from how pitiful the sight was. Manilow in his prime put on an incredible high-energy show. Now, the singer is either 72 or 75 depending on which source one wants to believe, has suffered multiple physical ailments over the past few years, including a throat condition last fall that required him to cancel his standing Las Vegas act for a couple of months, and sounds much like a scratched record that’s been played daily for the past 40 years.

To make matters just a little worse, Kors stuck a couple of models, including Bella Hadid, up on stage with Barry. The look on Bella’s face was that of the person forced to sit in the back seat of the car with the grandpa who hands you mints that are already damp. The longer “Copacabana” went on, the further Hadid eased herself away from the singer. I used to love Barry Manilow back in the day. I find it sad that he’s still having to perform, presumably to pay his ongoing medical bills. According to the schedule on his website, Manilow will be back in Las Vegas performing for Valentine’s day at the Westage Las Vegas. That makes me want to cry.

In fact, this whole collection makes me want to cry. We didn’t need to go here. We didn’t need to cover everything and everyone in glitter. We didn’t need the teased hair, the gold lamé, the chunky platform shoes, nor the fishnet stockings. Some memories, especially those clouded by 40 years of time and drug use no one actually admits anymore, should be allowed to fade fondly into the recesses of our minds.

At least it was good to see Patti again.