First, because there are still people in this world who haven’t caught on, know that Chromat is a swimwear label. Don’t go getting upset that there’s nothing in this collection that one can wear to an evening gala at the Met. This is a swimwear label specifically designed to reimagine how we view the human body and redefine what makes a “beach body.”

On their website, Chromat has listed ten “pool rules:”

This is the culture that Becca McCharen-Tran has nurtured at Chromat from the beginning. Her willingness to unapologetically make this ethos not only important to the operations of the company but front and center in its public presentation is what has allowed the label to move front and center in the fashion conversation. What McCharen-Tran has done from the beginning is only now starting to reach onto other runways. Dismissed by many, and originally derided by some for daring to show at NYFW, Chromat has become more than a mere fashion label. Chromat is a social movement for inclusiveness and body acceptance.

What excited me most about this season’s runway is that Becca has finally gotten away from some of the gimmicks used in the past. There were no inflatables. No one was strapping snacks to their thighs with bungee cords. Those might have been necessary in the past to get some form of attention from mainstream fashion media, Chromat is an important enough brand to not need the tactics that, quite honestly, diluted the company’s message.

Front and center to this season’s collection is a graphic print by Dana Scruggs of a nude body. We see the print from the very first t-shirt and it continues across multiple pieces in the collection, including a stunning full-length dress, which is as close as this collection gets to eveningwear. McCahren-Tran riffs heavily on the concept of the cover-up and the very idea that one needs to cover their body.

In an interview prior to the show, the designer said: “I wanted to reimagine the whole idea of throwing a ginormous shirt over your swimsuit at the pool because you’re too embarrassed to be seen, to take that moment of vulnerability and make it something to be proud of.”

Most, if not all women know that feeling, and if we’re totally honest, more than a few men have experienced it as well. Body shaming has been inherent across much of fashion but nowhere is it felt more strongly than at the pool and the beach where one is most exposed. Chromat exists to change that conversation.

What comes down the runway in terms of fashion isn’t especially startling. What makes the difference is who is wearing it. For example, a silver one-piece seen hanging on a rack in the store is going to look practical and perhaps even a bit austere. Put it on trans activist and actress Leyna Bloom and the suit becomes a statement of inclusivity. There is an incredible form-fitting peekaboo dress that any sane woman would put on her shopping list. For the show, it was paired with a neon bra which made the ensemble attractive on its own.  Wearing it, however, was cancer survivor and amputee Mama Cax whose presence on the runway takes the concept of kicking cancer to an entirely new level. This is how Chromat has developed such a strong and consistent following. The fashion doesn’t merely change our ideas of what to wear, it changes the dialogue about who wears it and who gets invited to the party.

Cheering and yelling in support of the models is kind of a thing at a Chromat runway. I don’t remember exactly which season it started, but its developing into an art form of its own. I tend to not participate often, but there was once where staying quiet was not possible. While other labels are still debating the entire topic of inclusiveness, McCharen-Tran included a beach-appropriate hijab and put it on Kadija Diawara, driving home the point that everyone gets to enjoy the water.

Speaking of water, someone must have turned on a hose backstage. Models walking the entire second half of the show were soaked, which, if one stops and thinks about it a second, is totally appropriate when showing swimwear. Why we’ve not seen that approach more often is rather surprising. The effect worked quite well.

Here are a few samples from the show: 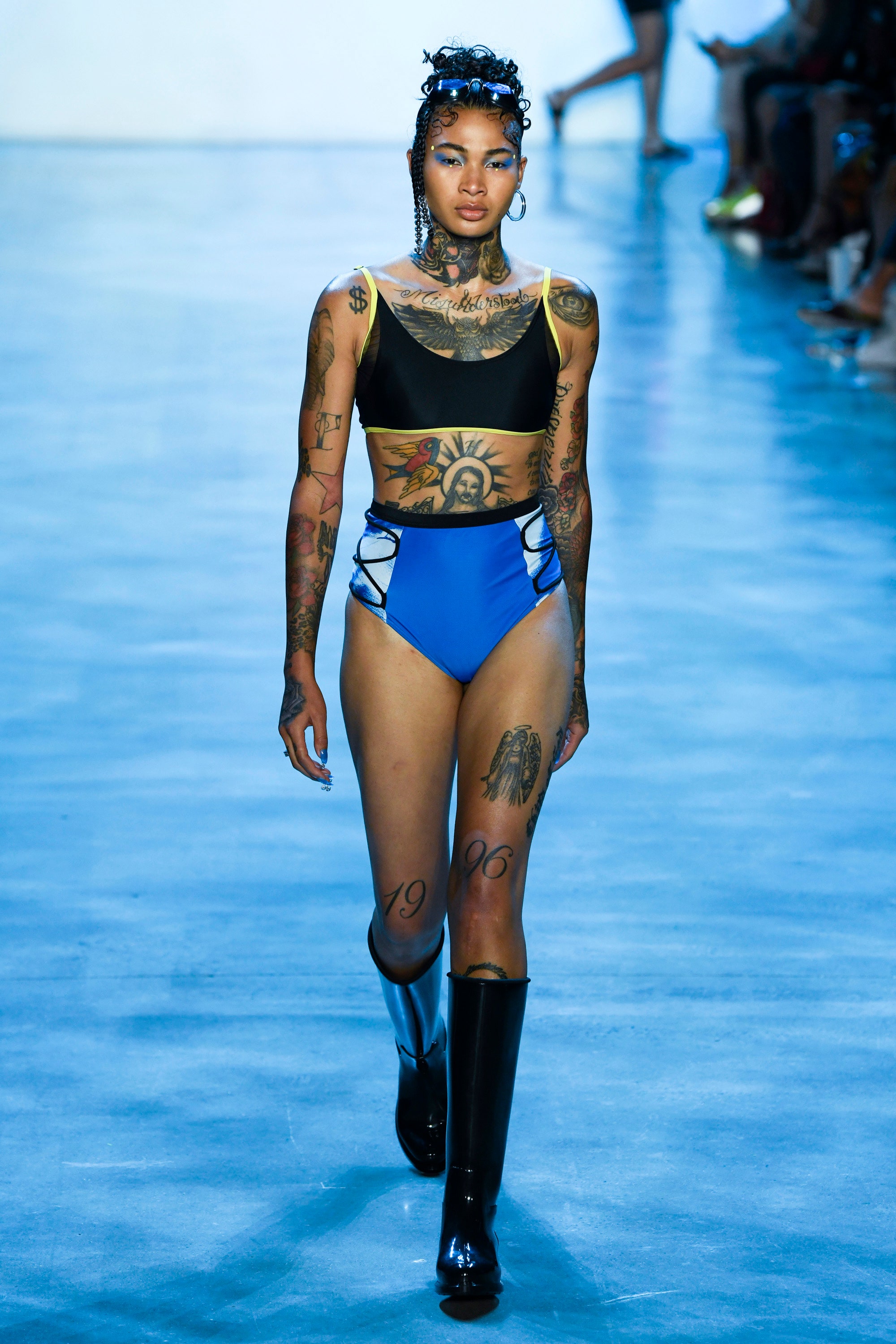 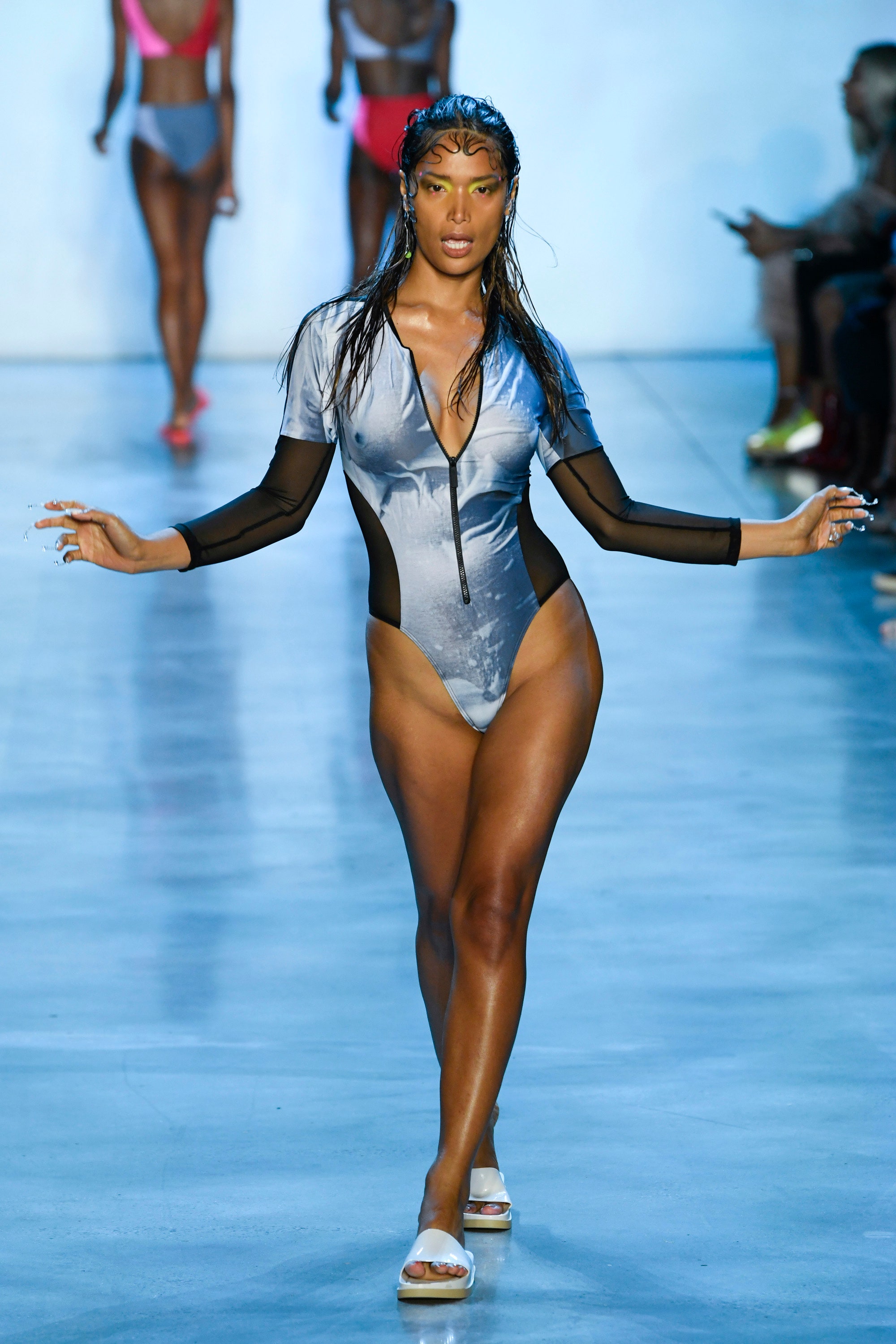 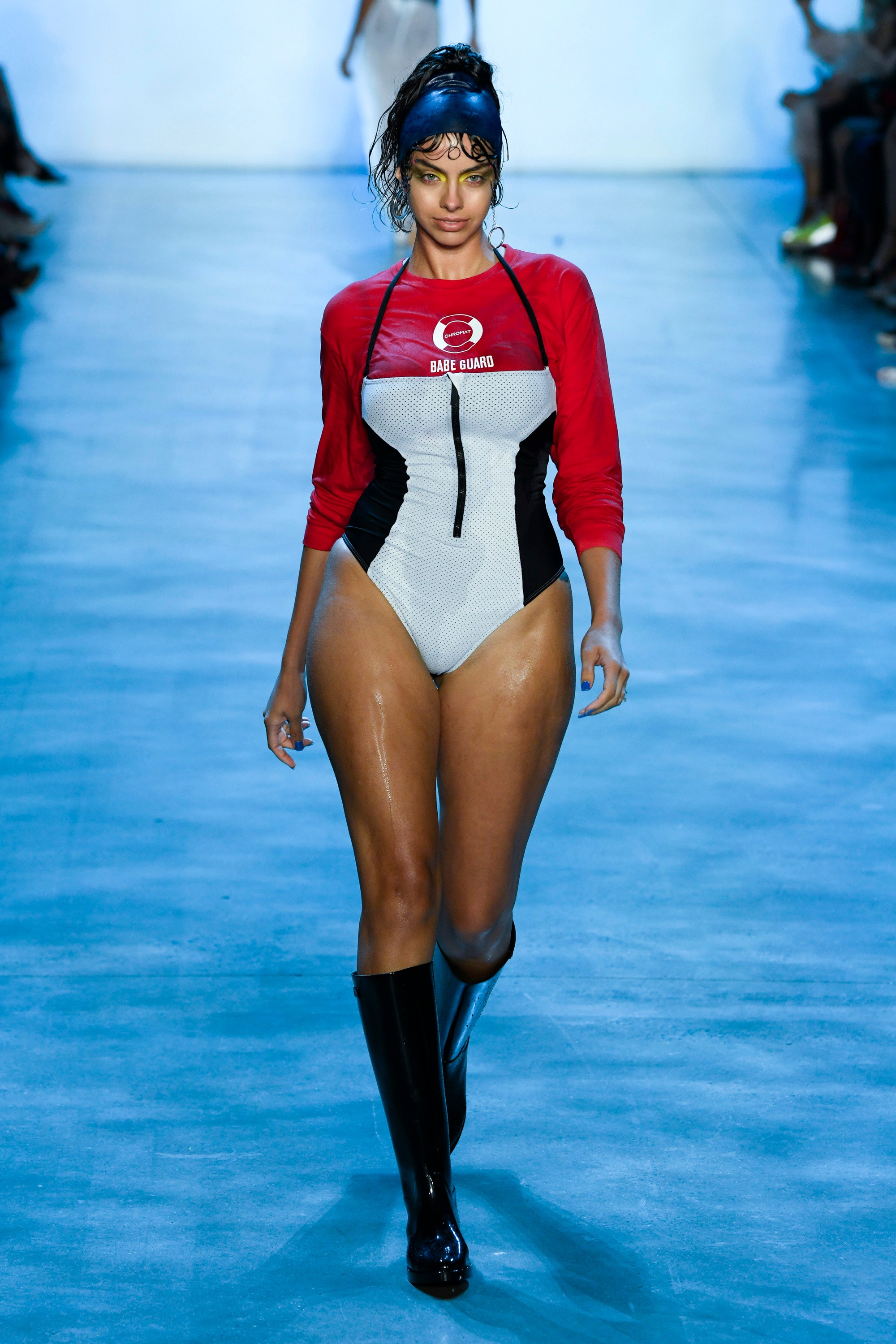 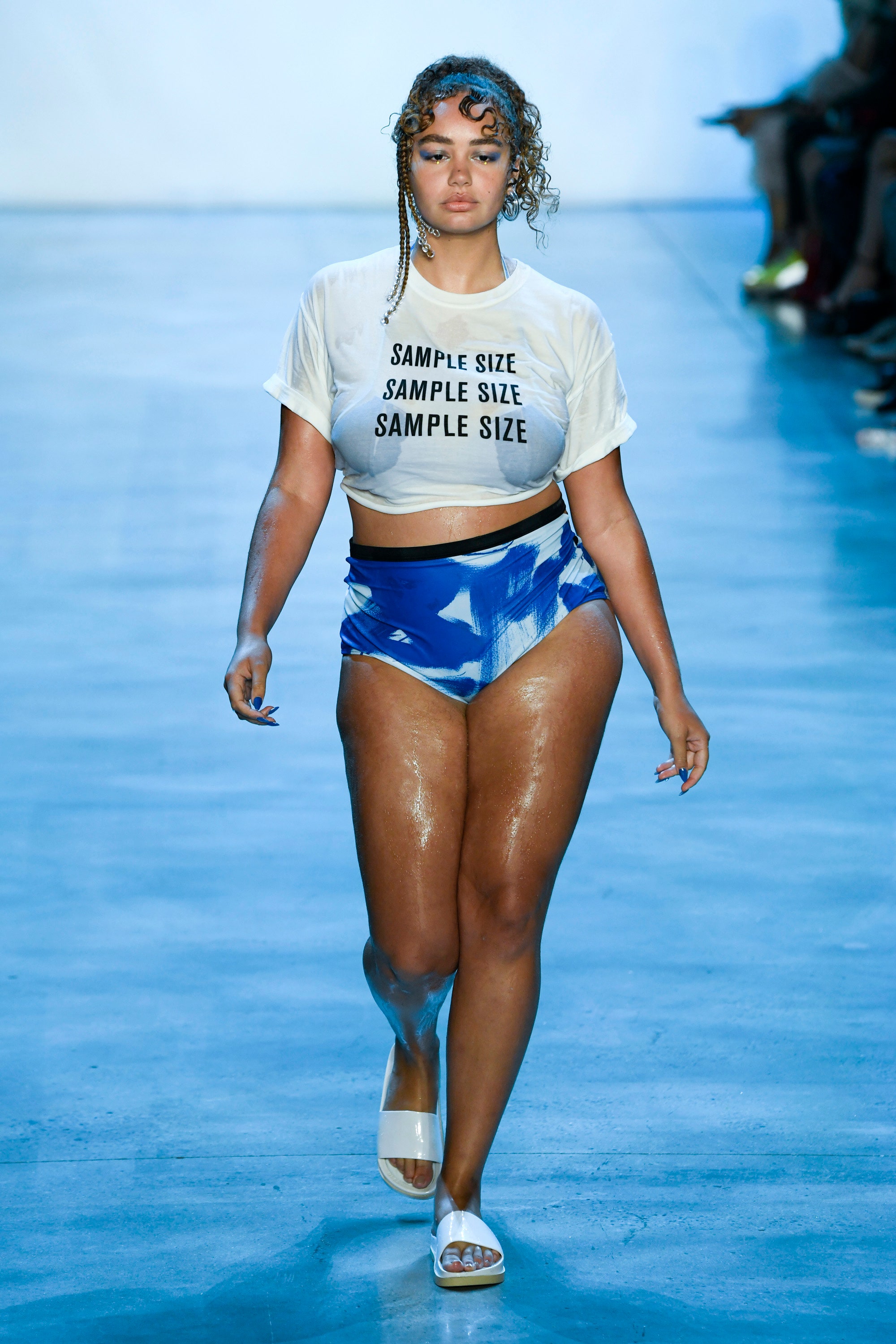 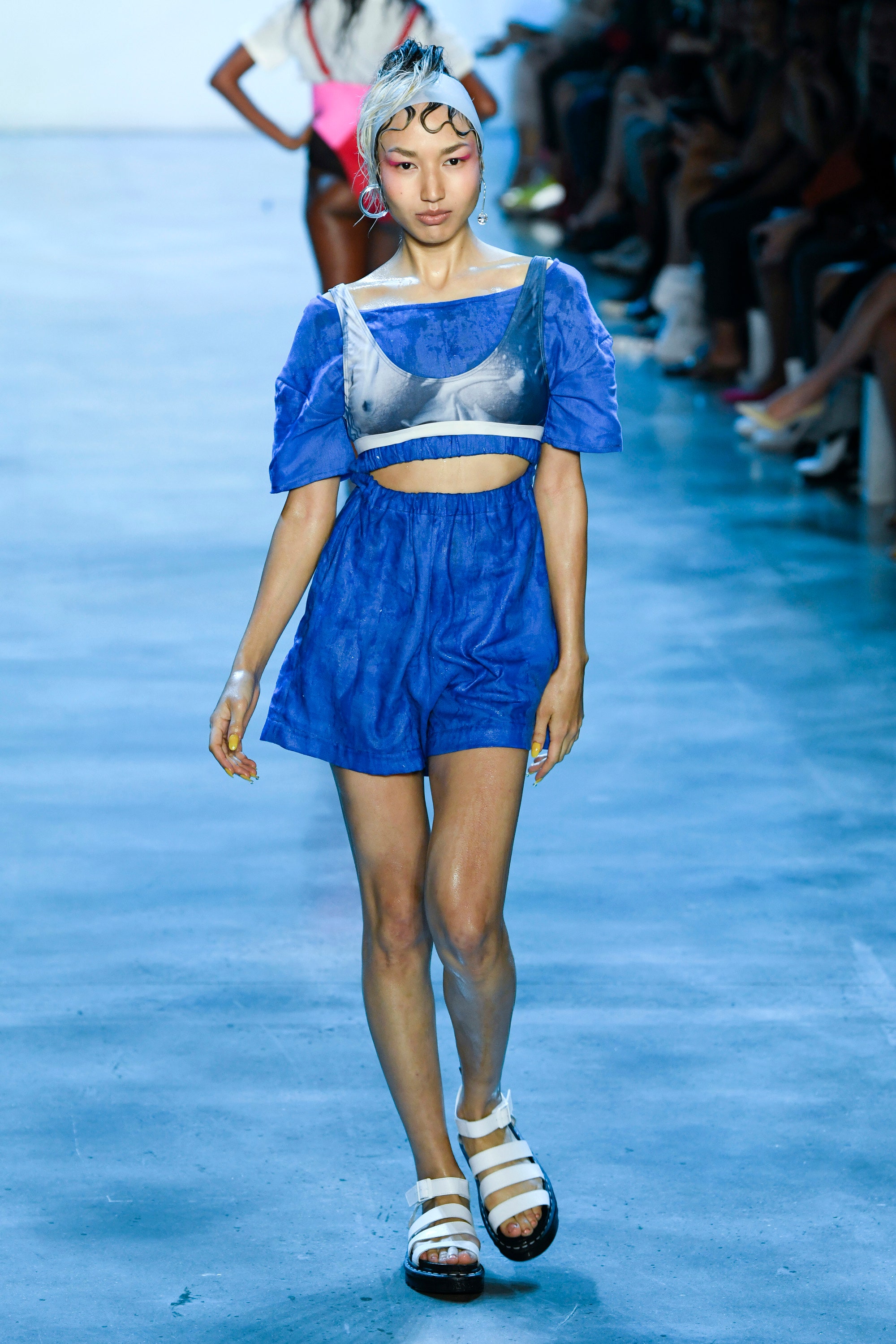 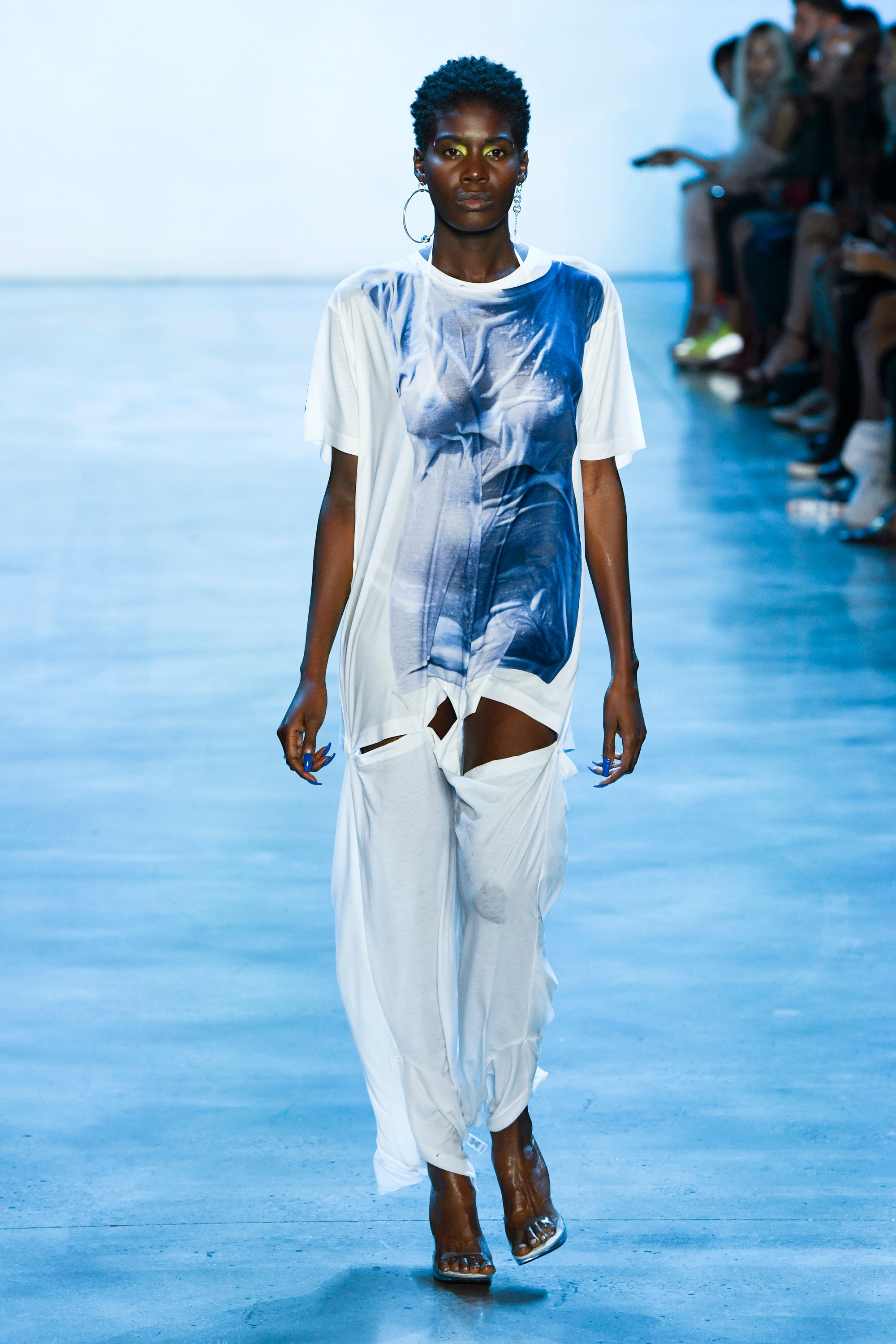 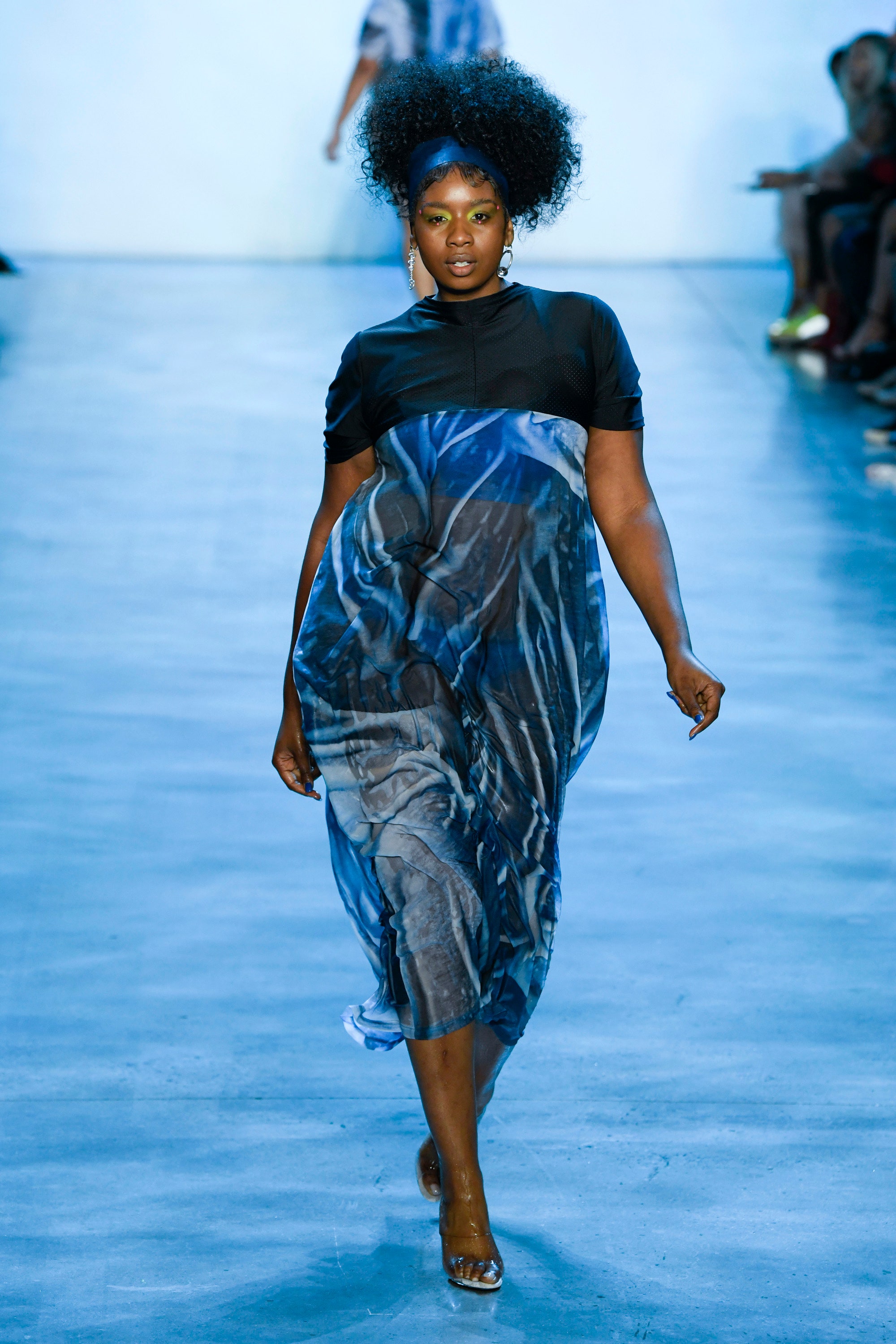 This is the strongest Chromat collection to date, in my opinion. The cuts have grown most sophisticated and the finishing is tighter. Becca has taken into consideration not only how the garments look but also how they feel when worn by people of different body shapes. She doesn’t simply “upsize” a swimsuit to fit a larger body, she considers the particular needs of that body and designs to address them appropriately.

The only downside here is that Chromat is the exception rather than the rule. There is no good reason for brands to not take on the same attitude toward inclusivity other than they simply don’t want to do so. If she had the bandwidth to do so, McCharen-Tran could branch out into daywear and likely become the most popular ready-to-wear label on the market.  While we’re seeing hints at increased inclusiveness here and there, the greater majority of labels still treat it as a gimmick. They apparently don’t see how ferociously supportive Chromat’s fans are. That support not only goes toward brand loyalty, it also extends to Becca and her staff as well as the models who walk in her shows. Fans are in love with the entire operation. No one else in fashion can make that claim.

I keep thinking that sooner or later the rest of the fashion industry will realize what’s happening at Chromat and start to copy it. Obviously, the industry has difficulty taking the hint. Until it does, thank goodness for Becca McCharen-Tran and for Chromat.