Stop. Before you go any further, if you have never seen the movies Jaws and The Graduate, take the four hours necessary and do so. Nothing in this collection is going to make a lick of sense if you’ve not seen both those movies, preferably more than once. I’m not sure how many times Calvin Klein’s creative director Raf Simons has seen them, but it was enough for them to become the obvious influence for this Spring collection. I’m disappointed that so many people just assume everyone’s seen the movies, but I talk to enough people under 40 to know that many of you haven’t. Do yourself a big favor and go watch them. Now.

Now that you’re thinking about the nuances of those two films, you can appreciate how guests felt when the lights went down and three walls of the facility at 205 West 39th Street suddenly became movie screens. The scene being shown was the one where Chrissie Watkins goes swimming in the ocean. The room was awash in the reflection of the blue water. If you’ve seen the movie, you know Ms. Watkins does not return from that swim. This scene, more than any other, was the reason for the tagline, “You’ll never go swimming in the ocean again.”

Simon’s collection isn’t terrifying, but the references to terror are there in pleated skirts with shark bites taken out of them. The “bites” look so genuine that wearers had best be prepared for observers to ask how they tore their skirt. Then, there’s the t-shirt with the familiar Jaws poster composited with the Calvin Klein logo. Those are likely to be sold out before they ever see a store shelf.

Then, there were the wetsuits. For a while, it seemed as though Raf was going to put everyone in rubber pants. The men’s collection took the brunt of this look and the general assumption is that we won’t actually see wetsuits with camouflage bibs hanging from department store racks next spring. The looks that riffed off the out-turned bib could likely stay, though, and might well be popular.

Mixing the two movies, Simons then put graduation gowns and mortarboards over the wetsuits.  He also put tux jackets over wetsuits. The combinations got a little bizarre for a moment.  Oversized checks, chain hooks linking panel dresses, chunky sweaters (because it gets cool on the beach after sundown), and miniskirts still invoking that wetsuit motif were all styled together with various props that inferred different scenes from the two movies. Again, if you’ve not seen them, you’re not going to get any of the references. They’re just subtle enough to make the casual observer wonder if Raf hit his head on the side of a boat. He didn’t. 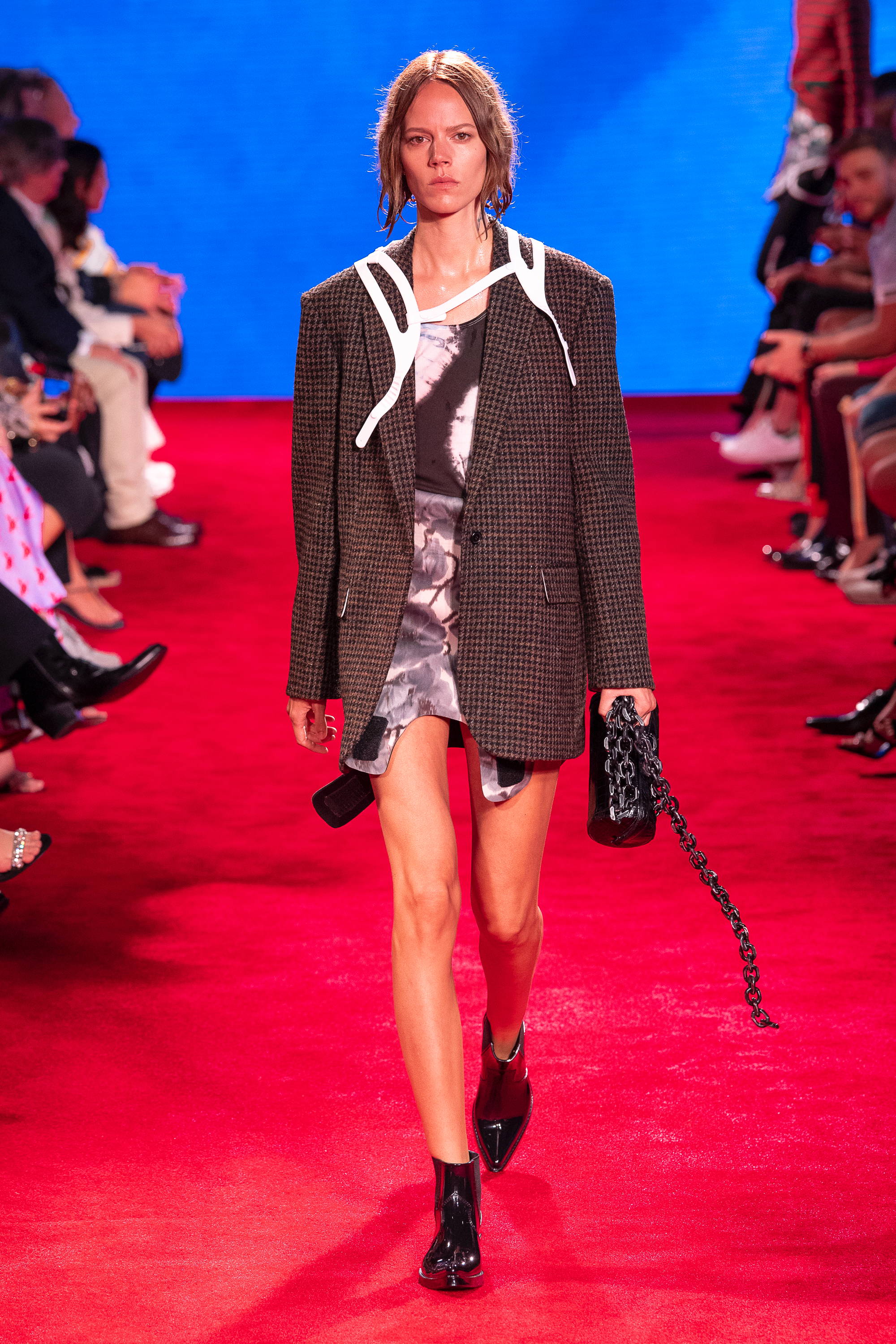 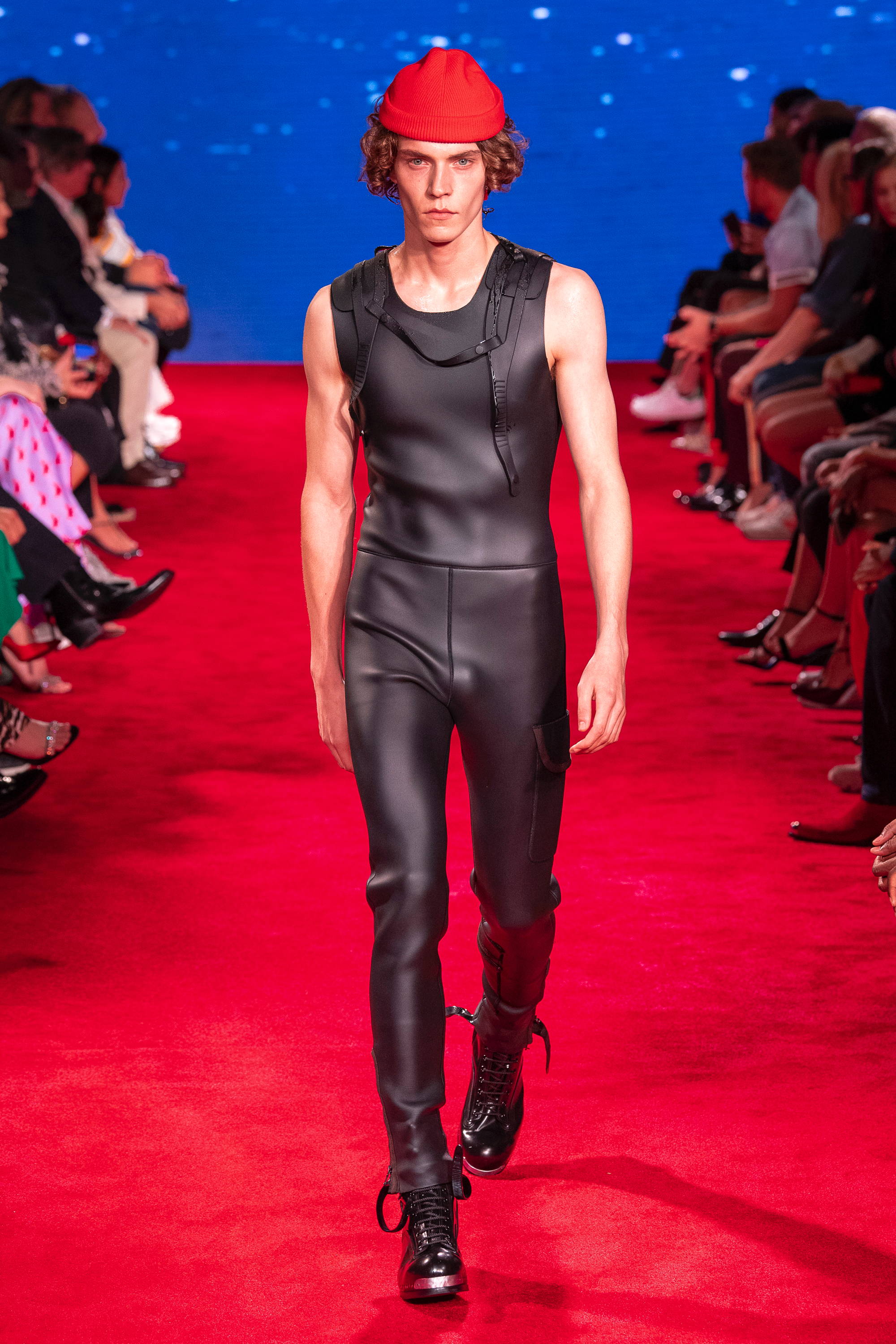 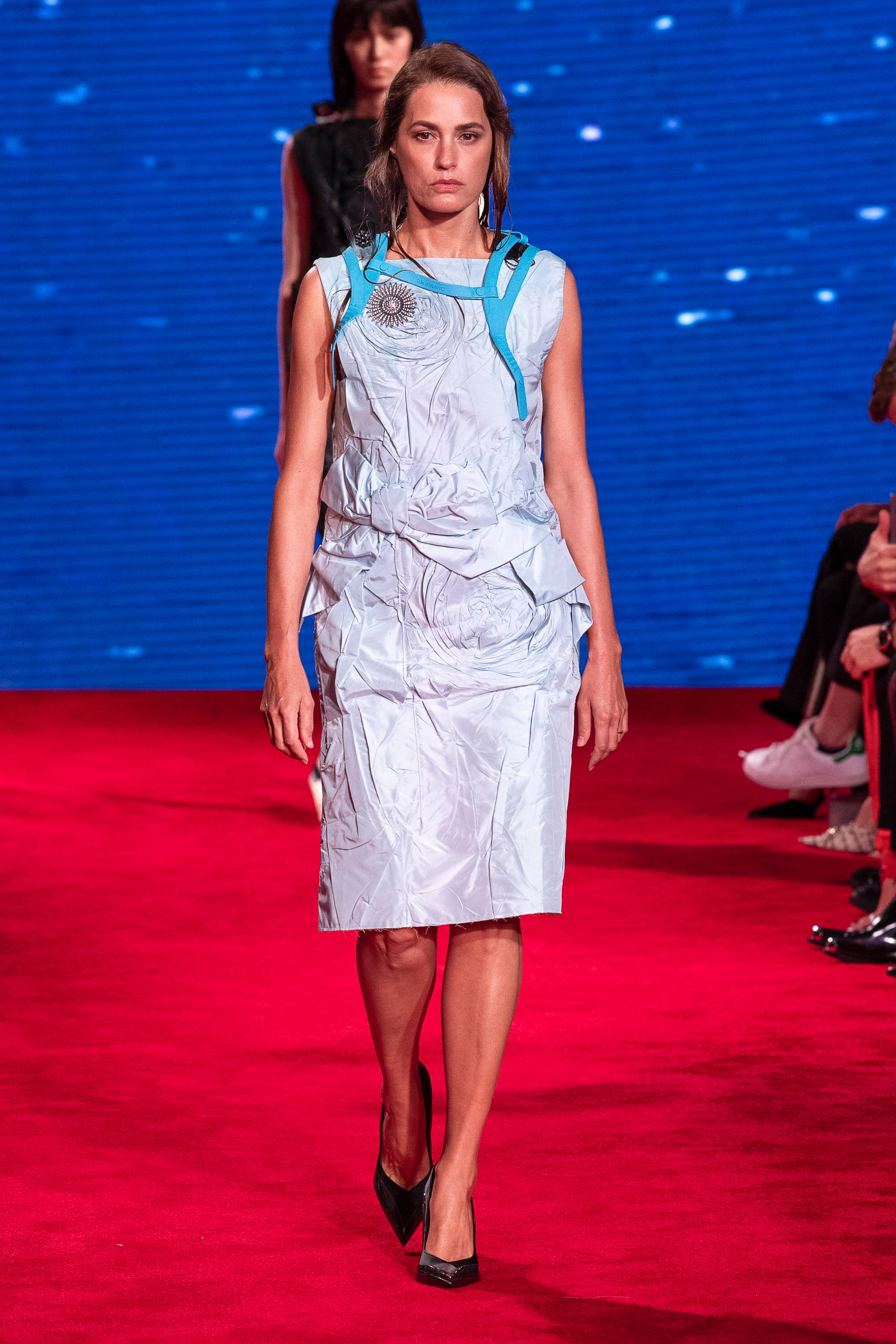 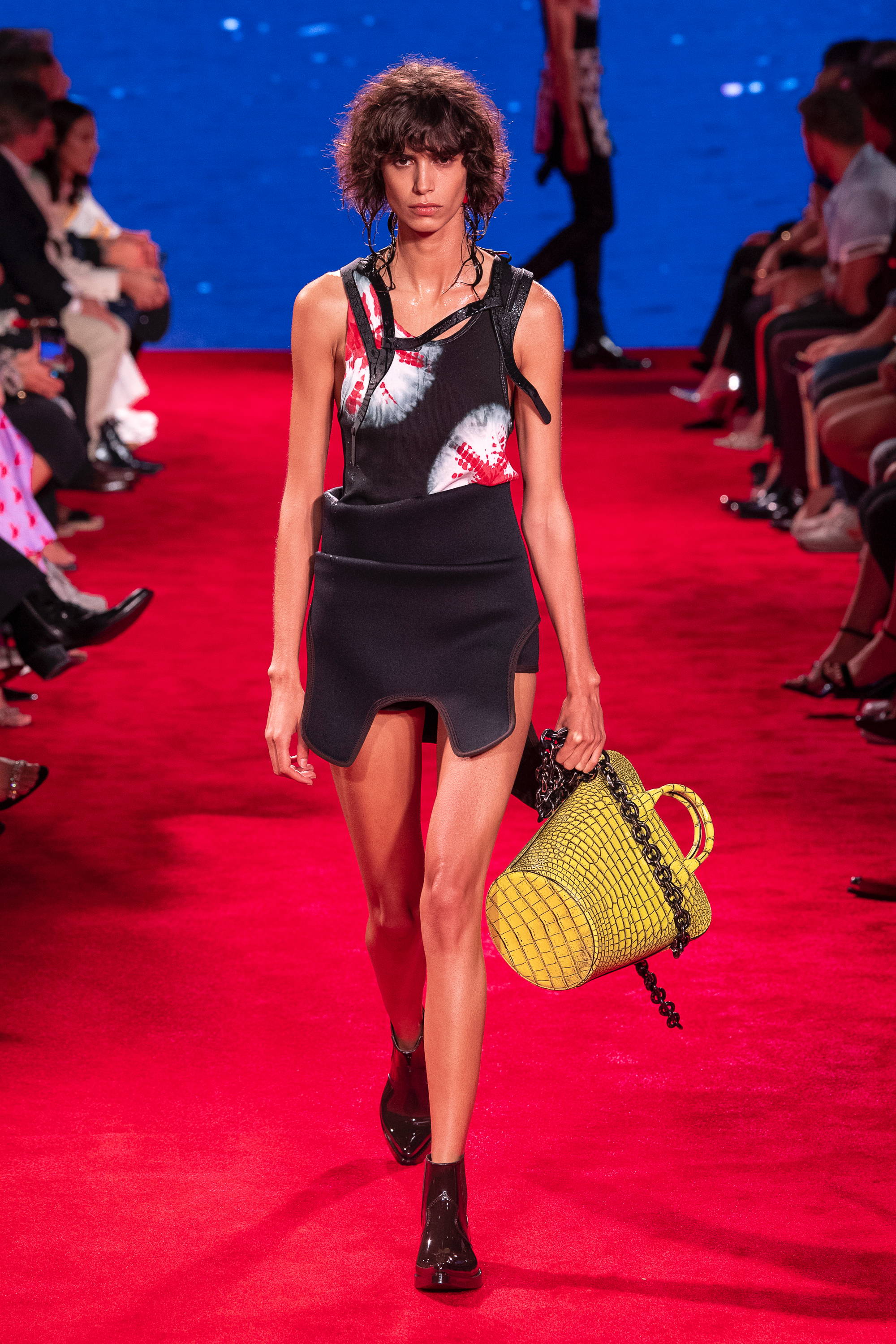 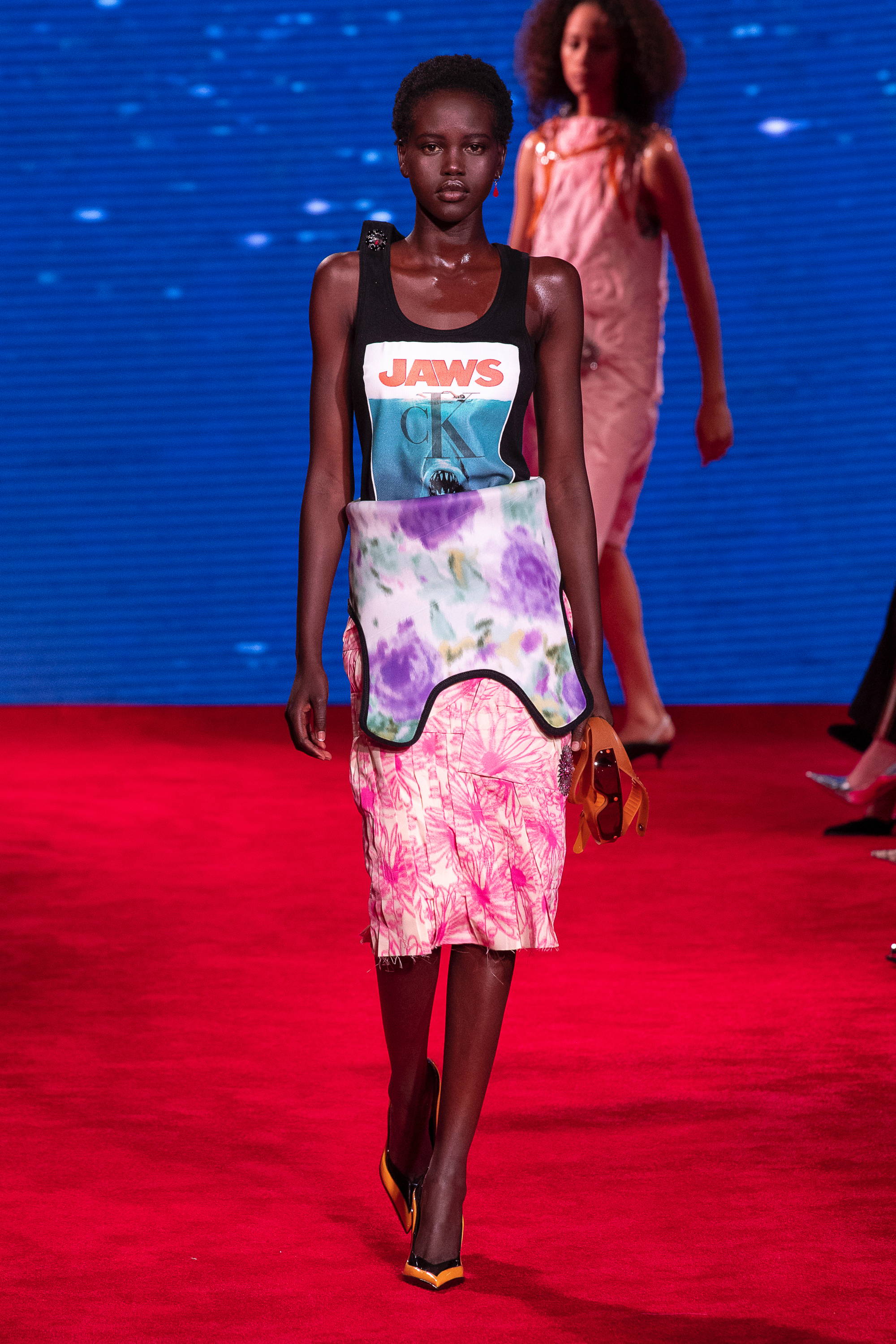 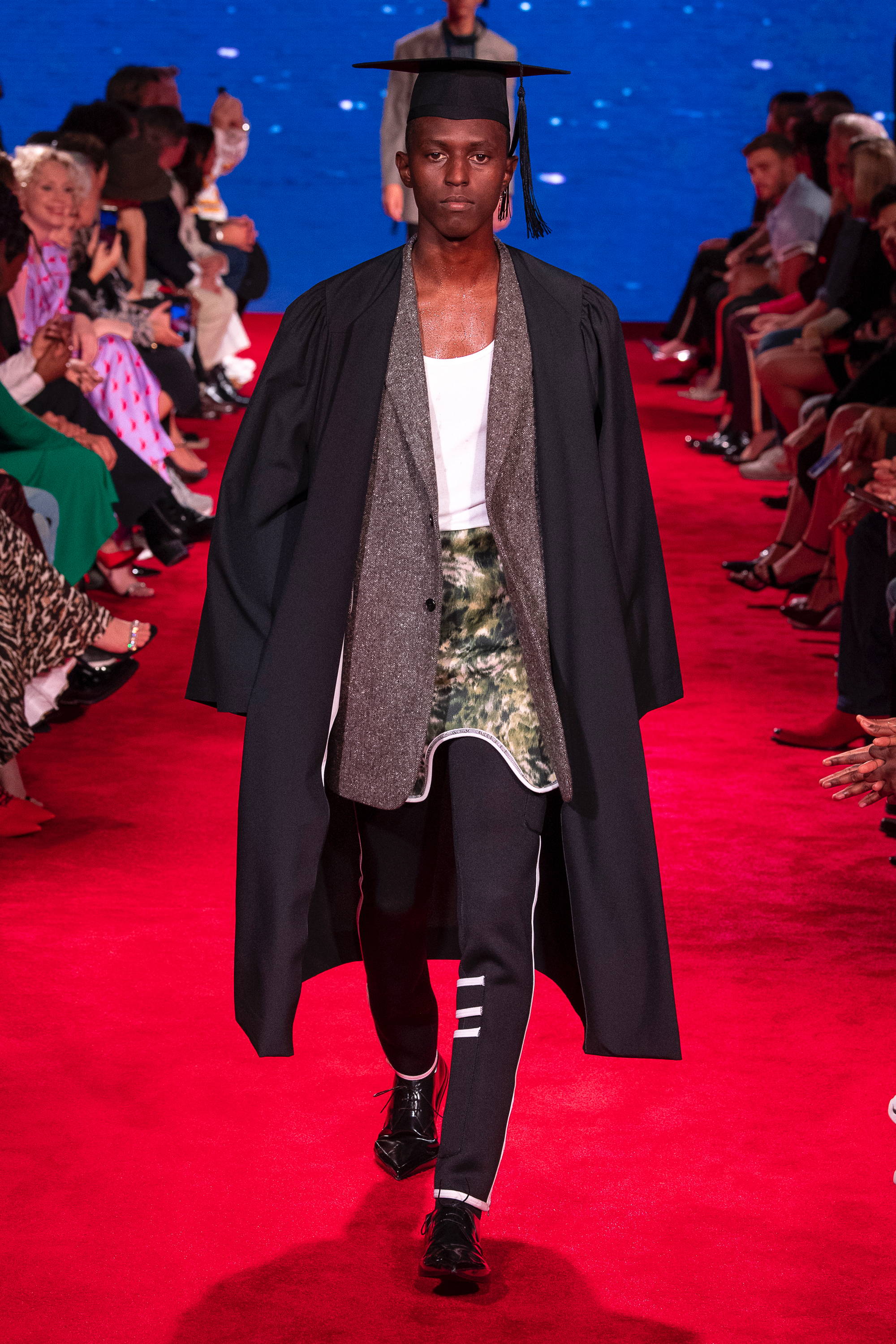 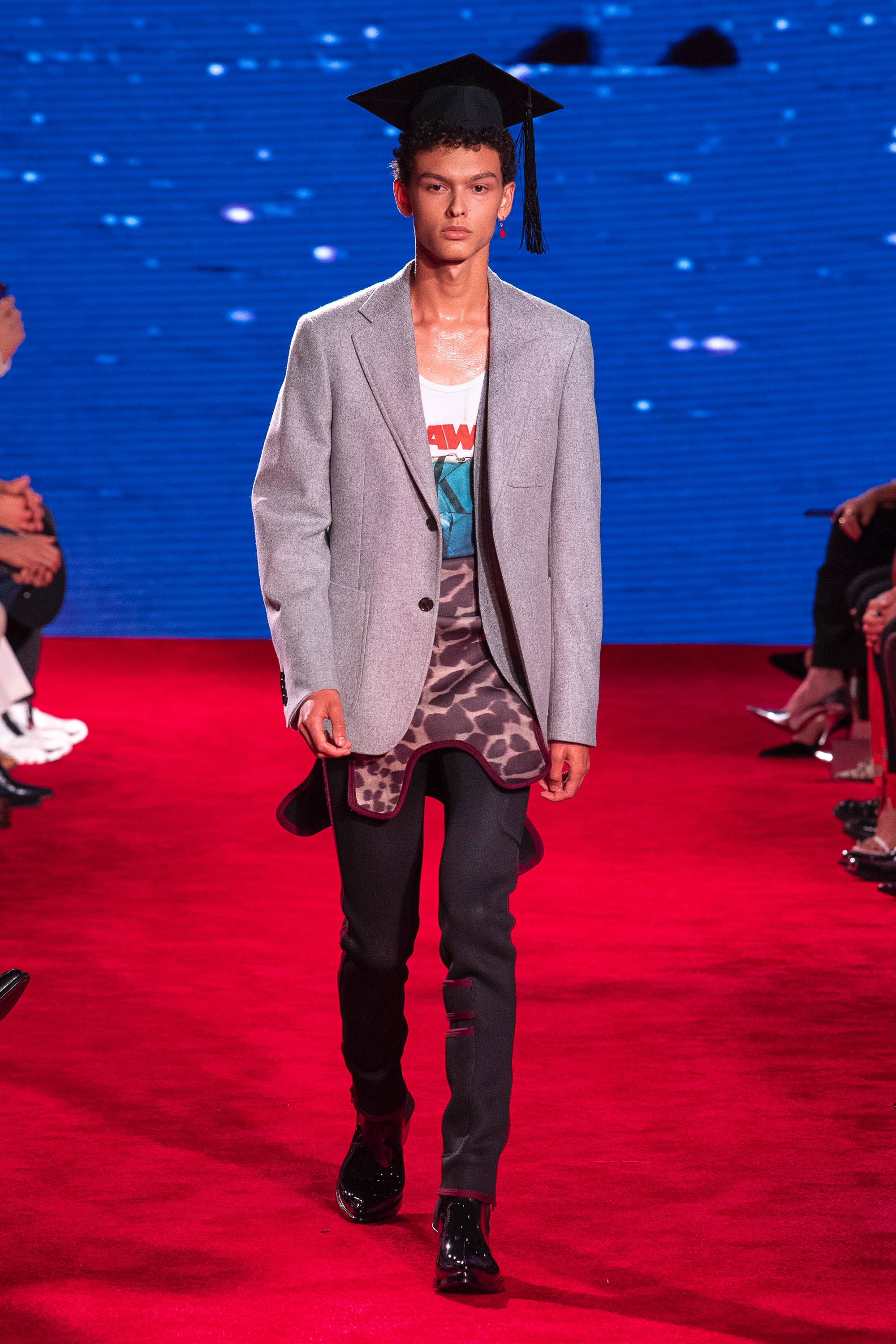 After the show, it seemed that Raf wanted to say something about how the collection reflects a certain danger, a political danger. However, Calvin Klein is a lot more adverse to controversy than Nike. A PR person stood next to him the entire evening, gently reminding him to be careful with his words. More than once he stopped himself mid-sentence. He told a gathered group:

“It’s a certain kind of attraction to whatever’s happening around us, which I want to see if I can turn around again. Disasters happen naturally, but they turn into beauty again. Beauty is around us but can often turn into disaster, whether it’s about love or about how humans are together We know each other from so long. We could speak differently back in the day but these days it’s so…”

His voice trailed off. The expression on his face made it clear he had been warned not to say too much. Simons isn’t accustomed to this kind of restraint and it’s chafing him. Finally, he mutters in a low voice, “At the end of the day it’s about love.”

Raf is a fantastic designer and Calvin Klein is fortunate to have him. However, he’s not accustomed to having limits of any kind imposed on him, whether in what he designs or what he says. Calvin Klein would do well to remove the restraints before the arguably most popular designer in New York cuts the chains and leaves.