The average fashion runway presentation takes about seven minutes from the time the first model hits the runway until the designer takes their final bow. Some are a bit longer, some a bit shorter, but it’s rare to see even the largest of shows last more than twenty minutes. What Alexander Wang did for his spring/summer 2018 show took all evening. Not that those watching were aware of just how long the show lasted. Guests at the Bushwick (Brooklyn) location waited a little over an hour past scheduled start, but that was still just a fraction of the total time involved.

I don’t know when the model call actually started. By the time I started paying attention at 7:30 pm, the NARS team had already done their thing, the girls were fully styled and everyone was on a bus headed for Soho in downtown Manhattan. Prior to that, they had visited Vogue offices at 1 World Trade Center but that was separate from everything else going on. Models, makeup artists, hair stylists, and others were all crowded onto a full-sized tour bus that was slowly making its way through the streets of New York. Understand, this was a Saturday night. Manhattan is always crowded on Saturday night. There is no such thing as moving quickly through the city.

The organization effort required to pull off this show was massive. In addition to the tour bus, there were three full-sized Dodge RAM trucks carrying massive tungsten light arrays, a full-sized trailer, and multiple SUVs. Somewhere close to 100 private security personnel were required in addition to an event staff that likely numbered close to 200. Large barriers attempted to hold back the massive crowds that packed the sidewalks. I’ve watched a Presidential motorcade make its way through these streets before and what Wang pulled off Saturday night was more involved and complicated. If anything, the fact that they were able to pull off a spectacle of this size is a testament to the city of New York’s dedication to working with designers. I don’t want to think about the countless hours someone spent getting all the permits necessary for this event.

#WANGFEST was emblazoned across everything. DJs filled the streets with booming sound. Finally, well after 8:00, the model bus pulled up, the door opened and Kaia Gerber stepped off the bus, starting the show. Not that everyone necessarily realized that the show was starting. More than a few people assumed that the barricades on the street were simply there to allow the models clear passage to an indoor venue. That wasn’t the case at all. Models walked from the bus down the middle of the street to the waiting trailer at the other end. Once all the looks had passed, the finale walk consisted of the models walking back to the bus. Alex made a short sprint half-way down the block, then returned to the bus himself. The door shut, and the bus pulled away.

And of the show, right? Not hardly. From Soho the bus made its way North to Astor Place; not really that long of a trip accept that in New York traffic it took about 30 minutes. Here was another crowd waiting. The trucks set up the lights, the trailer took its place, and the models walked again. Nothing changed, mind you. Guests at the second location saw the exact same looks on the same models as did the guests at the first location. Back on the bus, and off we go again. Ready for the after party?

Ready for the after party? Sorry, we’re not there yet. From Astor Place, the bus travels over an hour to a dead end street in Bushwick. Even in the middle of a Monday afternoon, when traffic is at its lightest, this is a 45-minute trip. Models on the bus sat and chatted a bit with each other, danced a bit to the hip hop soundtrack playing, and Suki Waterhouse did her best to stay inside her top. It wasn’t easy. This was an interesting opportunity to watch the models largely not interact with each other. Kaia Gerber stood at the front of the bus the entire trip, speaking pleasantly when spoken to, but otherwise silent. While Miss Waterhouse and Alice Dellal danced a bit in their seats, others such as Ez and Natalie Westing sat quietly looking more than a bit nervous as the bus made its way through Brooklyn streets. Alex moved back and forth among the group, his hand constantly combing through his long hair, a habit that reveals how anxious he is in any situation.

A few touch-ups were necessary as the group approached the Bushwick location. Wardrobe was re-adjusted and secured. The bus pulled up, the door opened one more time, and once again Kaia led the way. There wasn’t quite the same sense of excitement at this point. Even the crowd gathered in Bushwick, which included editors, buyers, and the press, had waited long enough to be ready for the whole thing to be over.

And what did everyone think of the clothes? After all, that is the whole point of this seemingly endless extravaganza, wasn’t it?  First note that this isn’t as big a collection as the 60-something look show we saw this time last year. 32 looks was it, and that’s really enough for a chilly evening in Brooklyn. The deconstructed and re-layered pieces were sharp. Silk teddies merged with oversized sweatshirts were a look I fully expect to catch on. Cut-off shorts over leather pants? Maybe, but only if it’s not too warm out. The jacket cut in half and worn as a skirt works off the decades-old habit young women have of tying a coat or sweater around their waist; you’ll just pay a lot more for it now. Studs on a single leg, severely distressed jeans, and, of course, plenty of Adidas wear felt like something we’d see on a New York street most any evening. Here, take a look: 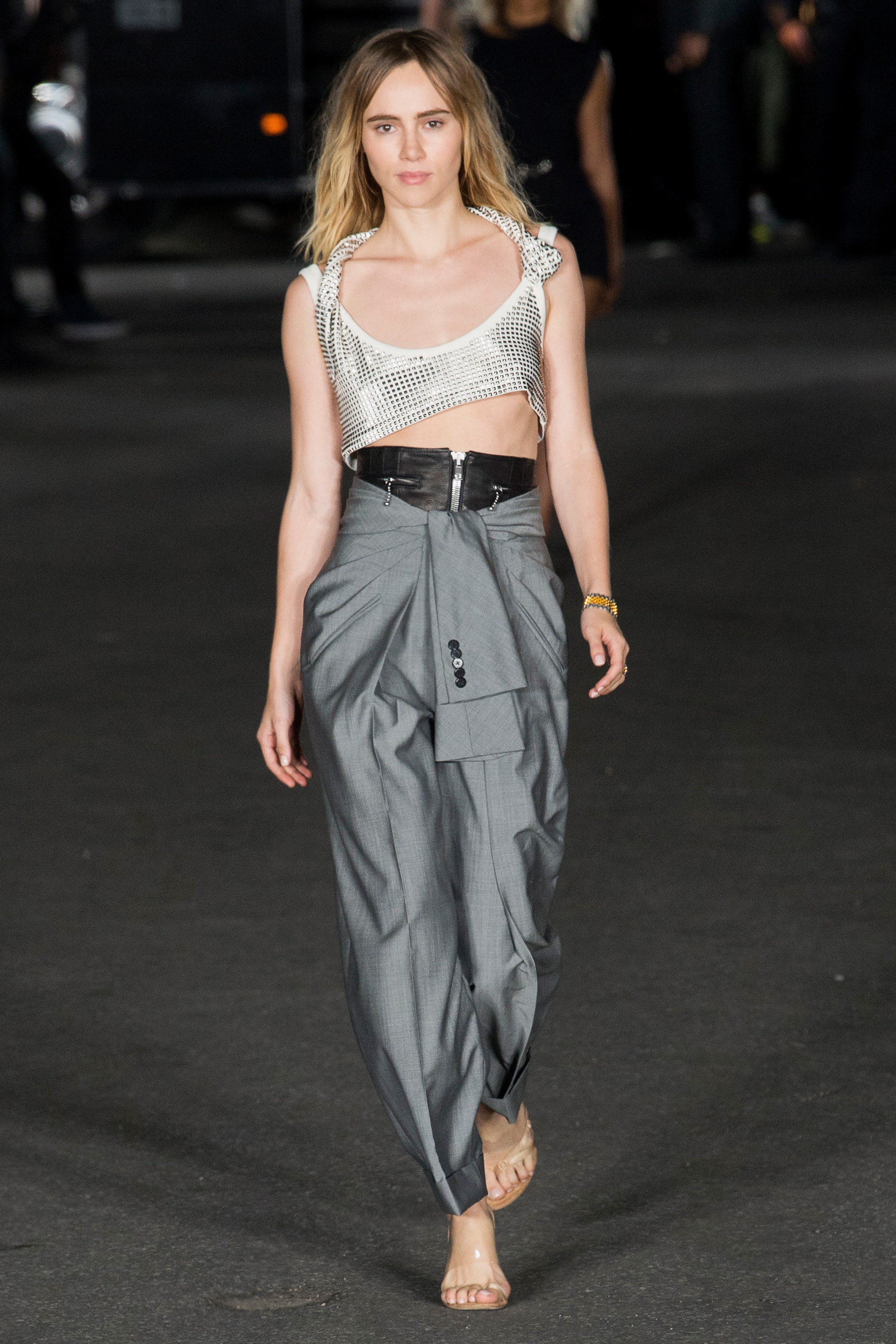 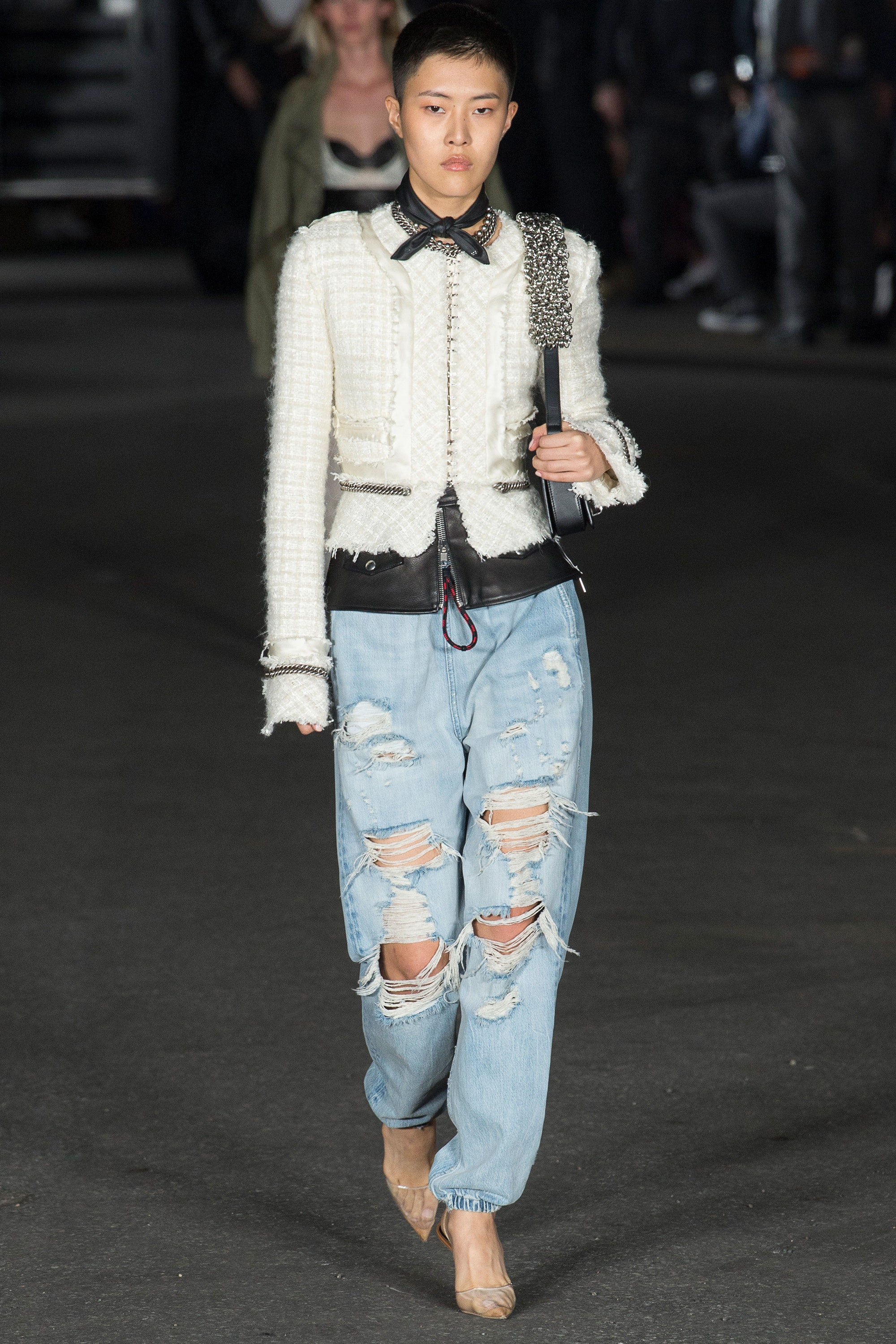 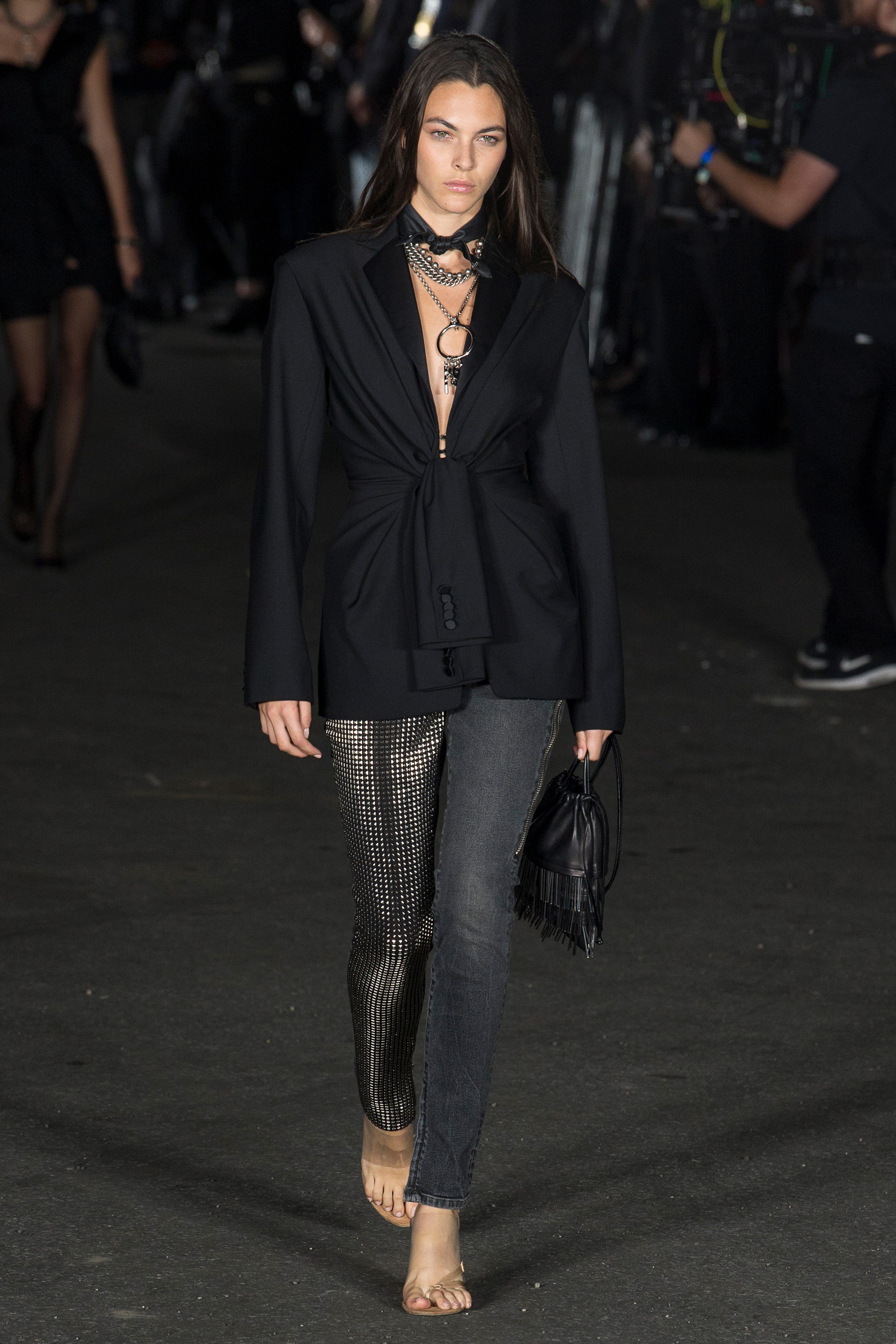 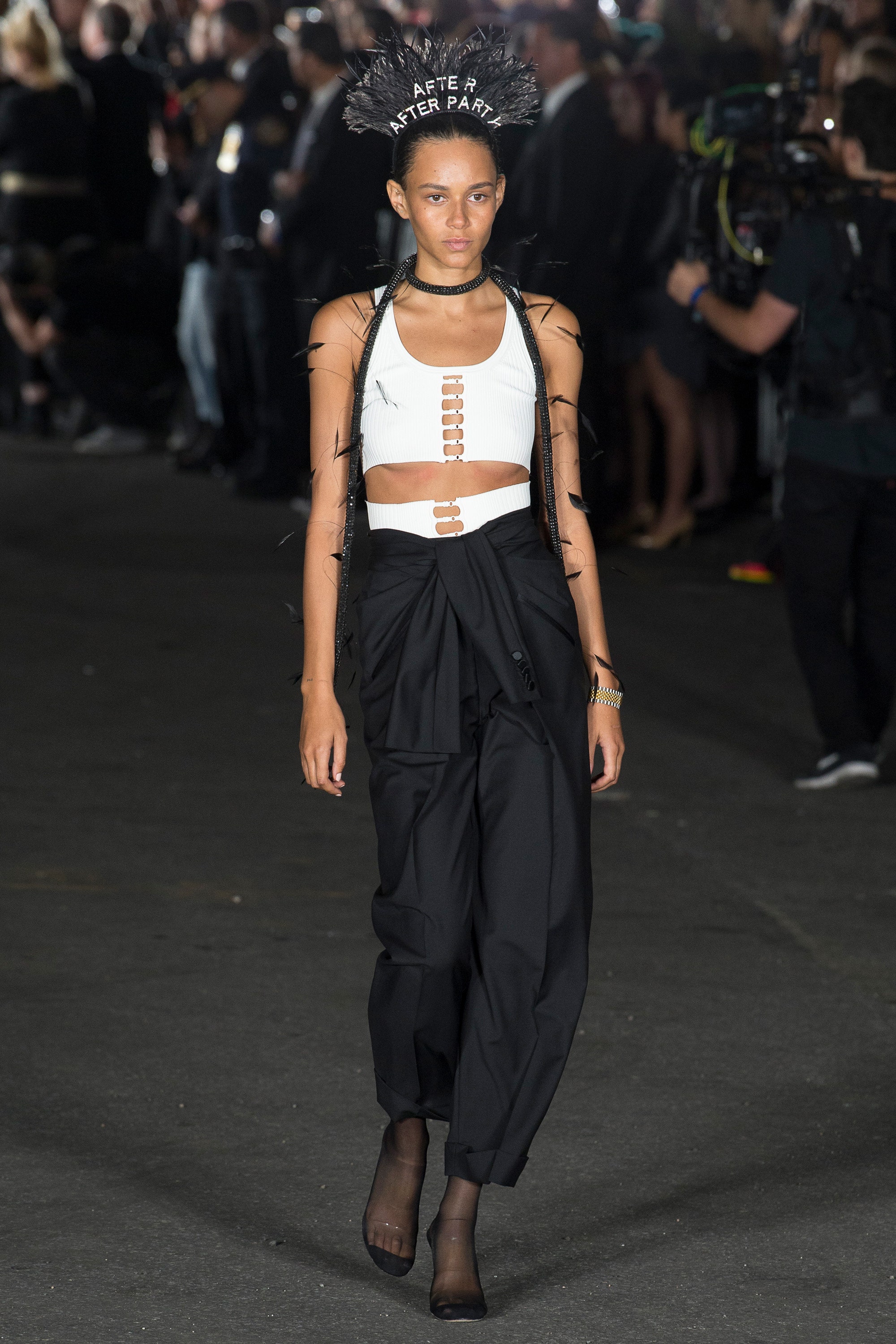 By the time everything was said and done, everyone looked exhausted. Sure, they all went to the after party. Alex rented a bouncy castle. Who wants to miss that? But by this point the hands on the clock were pointing toward 11:00 PM. More than three and a half hours had passed for me and Wang and his staff had been going quite a bit longer. They pulled off one of the most challenging and grueling fashion shows I’ve ever seen. Now, they get to see if those efforts paid off.

Street style is big business in fashion and Alexander Wang’s name is top dog in the genre. Putting the runway directly onto the street was a fantastic idea that could have only played this well in New York. Sure, there were some minor glitches here and there. I’m aware of at least one instance where the security barrier was breached but NYPD quickly addressed the matter before it got out of hand. Overall, the gimmick seems to have been a success.

I find myself hoping, however, that no one else tries to match him. Across town, Phillip Plein put on what I understand was a pretty impressive show, but even there people were talking about Alexander  Wang.

Personally, I couldn’t stay up for the after party. I crawled across the room to an oversized chair and fell asleep. Maybe fashion week should come with a curfew. Maybe I’m just getting old.