Miuccia Prada’s collections always feel a bit ambitious, but to put it in Midwestern terms, this season she’s really on one. This Spring/Summer collection is a study in contrasts and comparisons. She goes back and forth from casual looks to formal, athleisure-styled looks beginning the show, to little black dresses, wool sweaters over starched white shirts to tie-dye and graphic photo prints. There are sheer black stockings that come up to the knee, then, there are bright pink sports socks with the Prada logo. Everything is topped with a raised jeweled or studded headband.

At first glance, one might think that Prada is trying to make sure she has something for everyone, and perhaps to some extent that’s true. Prada, the company, has seen better financials over the past year, a seven percent increase, largely due to the reintroduction of archived favorites. To the extent Ms. Prada tosses in some of her “greatest hits” she continues to attract those buyers who have trouble moving on from what was popular 20 years ago.

Accusing Miuccia of looking back or pandering to one specific audience, though, is a mistake. She works fiercely from her own vision of the world, a perspective that is unique in its ability to objectively consider multiple viewpoints and find beauty in both sides. Ms. Prada senses that an “extreme conservatism” is coming and she’s hedging against that movement by contrasting it with more rebellious looks. As a result, we get t-shirts with pleated skirts and baby doll coats over tops cut like swimwear (please note, this is not actually meant for getting in the water).

Miuccia was feeling especially chatty after the show, and perhaps a little more pointed in her comments. For example, one reporter referenced the increase in logo-wear in this collection, something we’ve seen consistently throughout this season, and asked if she was directly targeting Millennials. Typically, Miuccia tries speaking in English for these press events, but she took such umbrage to the question that she reverted to her native Italian. Since my Italian sucks, I’m borrowing someone else’s translation.

“I don’t like it when people assemble meaning around a term like millennial. It means somebody to sell things to. Young people are different kinds. They’re intelligent, they’re stupid, they’re cultivated, they’re not. I speak to people.”

That had Miuccia on a roll. One got the impression that she might have had these discussions with her staff and possibly even her family. She’s naturally passionate and all that emotion came through as she continued talking in a way that had front-line reporters taking a couple of steps back.

“Do you want fashion to be a hashtag? Much like politics? That’s how you rule a country now…hashtags. Because right now, politics have been reduced to hashtags and fashion shouldn’t follow this excessive simplification, because the more you simplify, the more slogan you use, the less content there is.”

As she talked, Ms. Prada grew frustrated perhaps not so much at the question as with the difficulty she was having keeping the sweater wrapped around her arms. The new show space, which I’ll discuss in a moment, was a bit chilly backstage. She hadn’t wanted to actually wear the sweater, but her arms were cold. Don’t be surprised if a solution shows up in next fall’s wardrobe.

Here are a few samples from this collection. 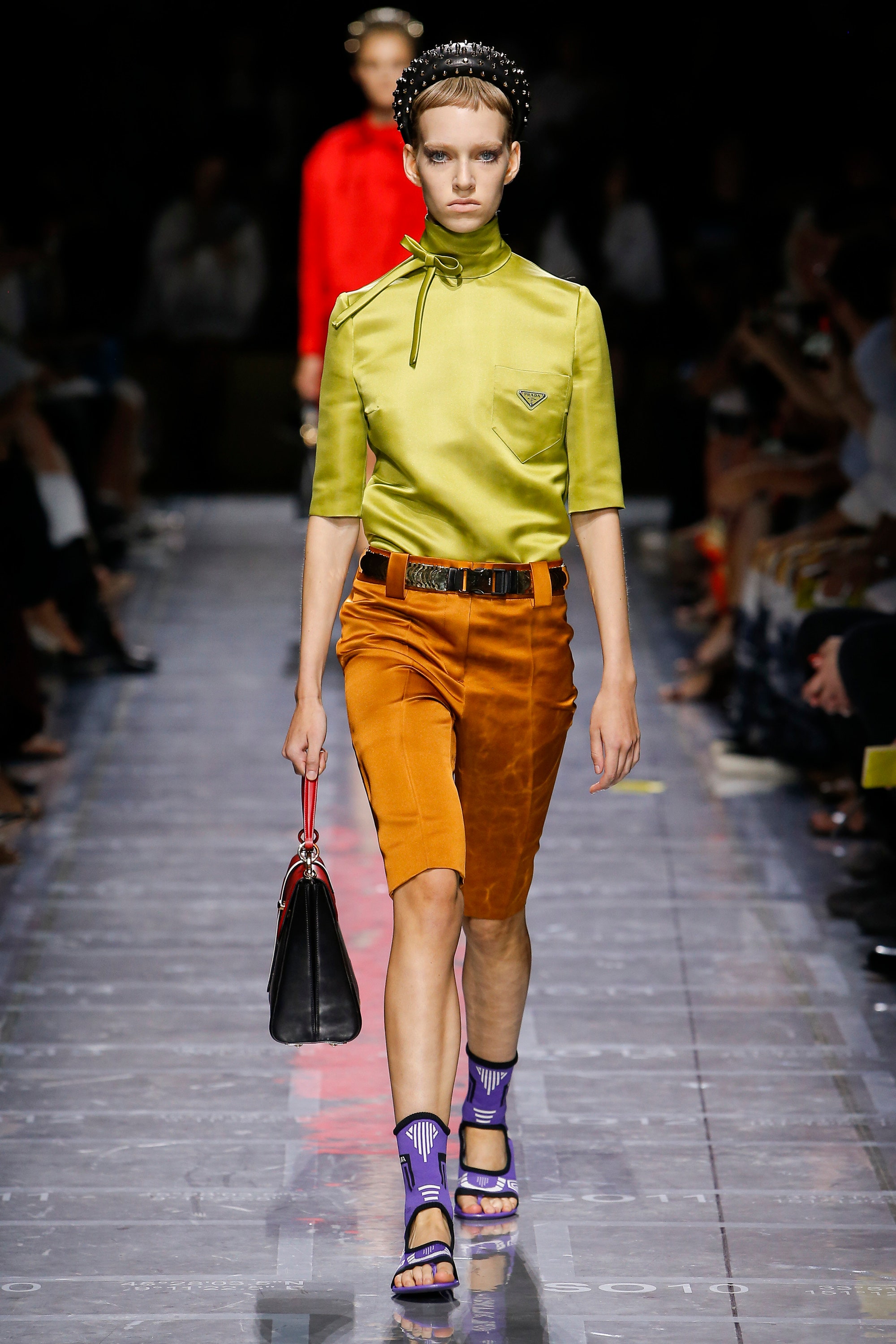 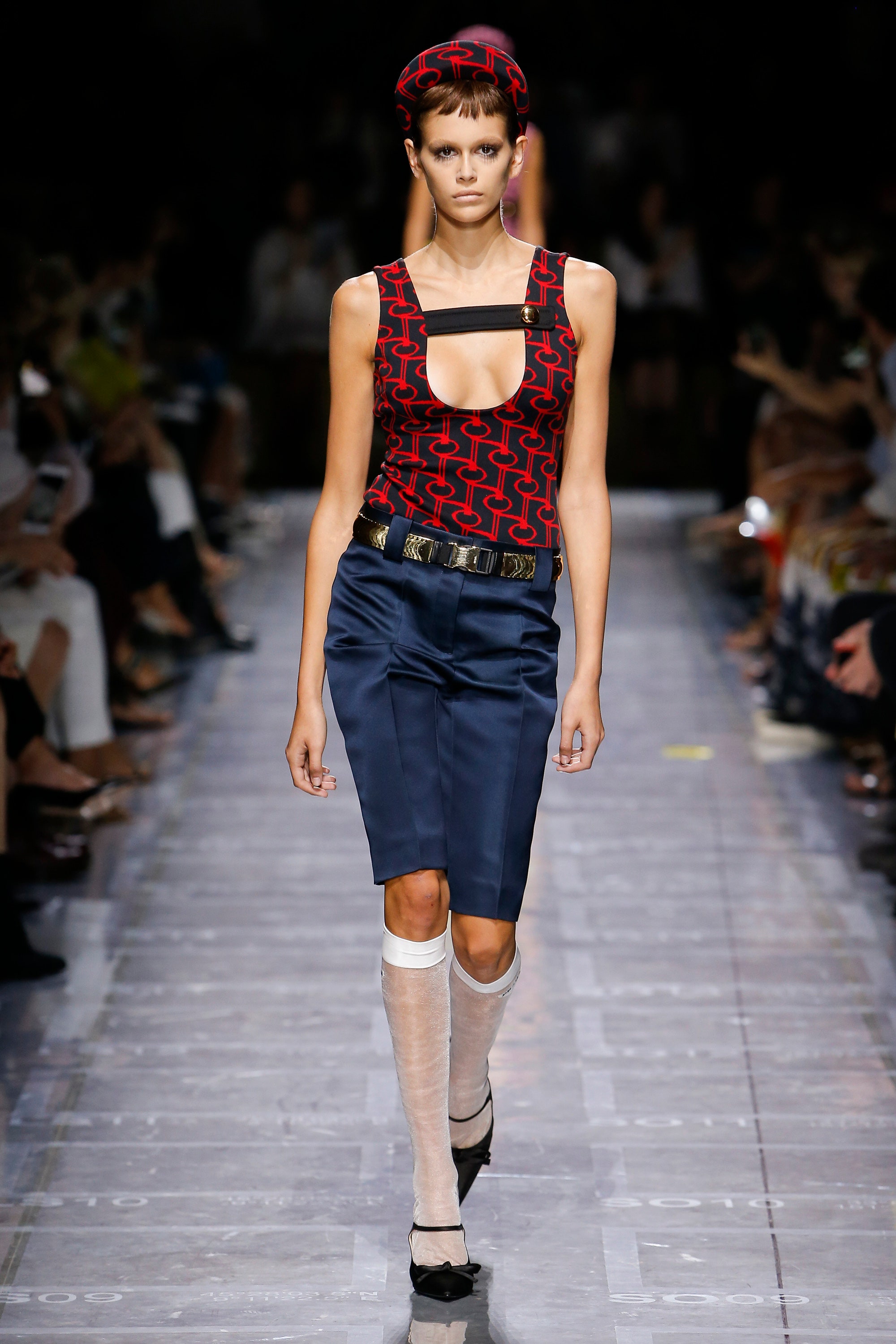 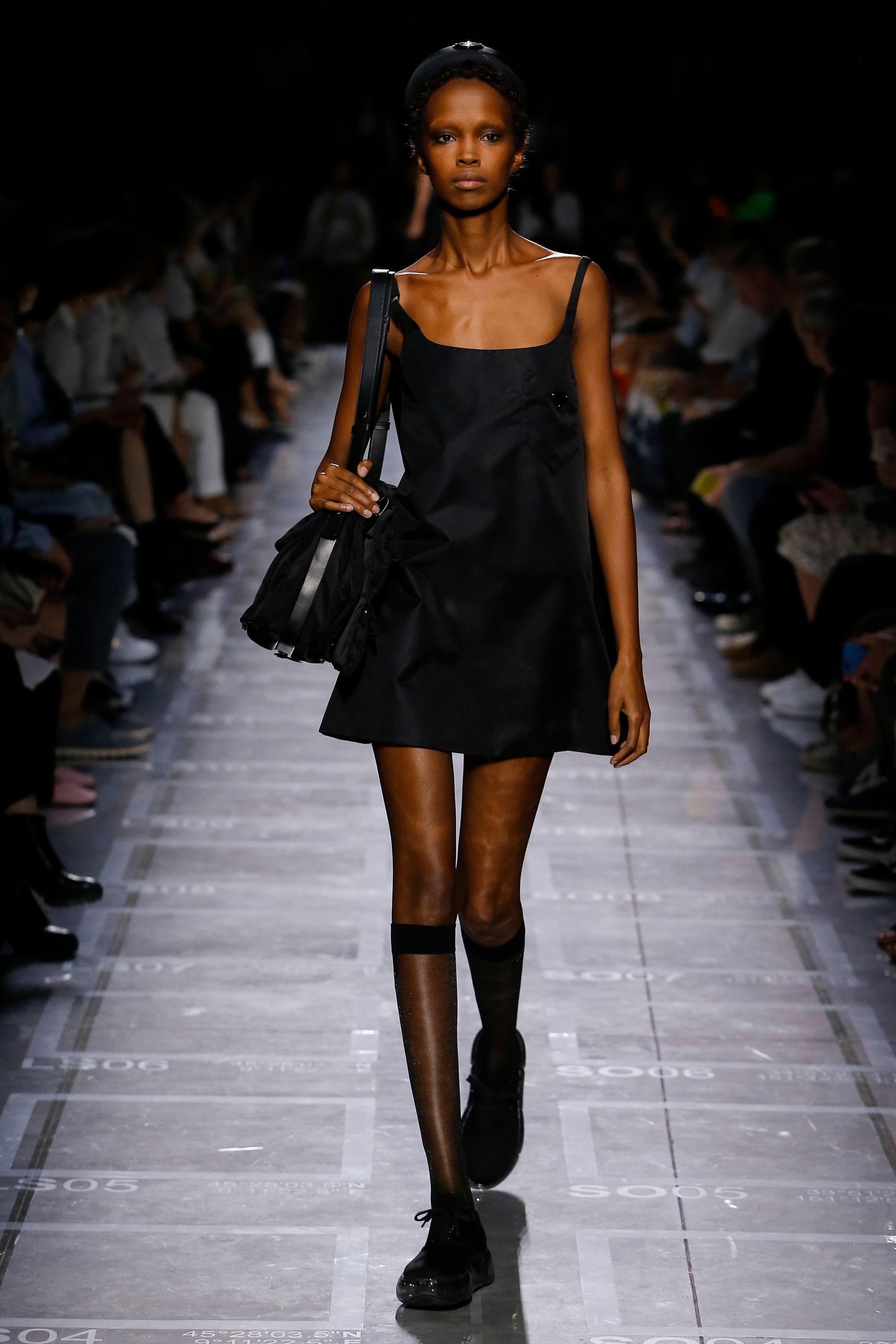 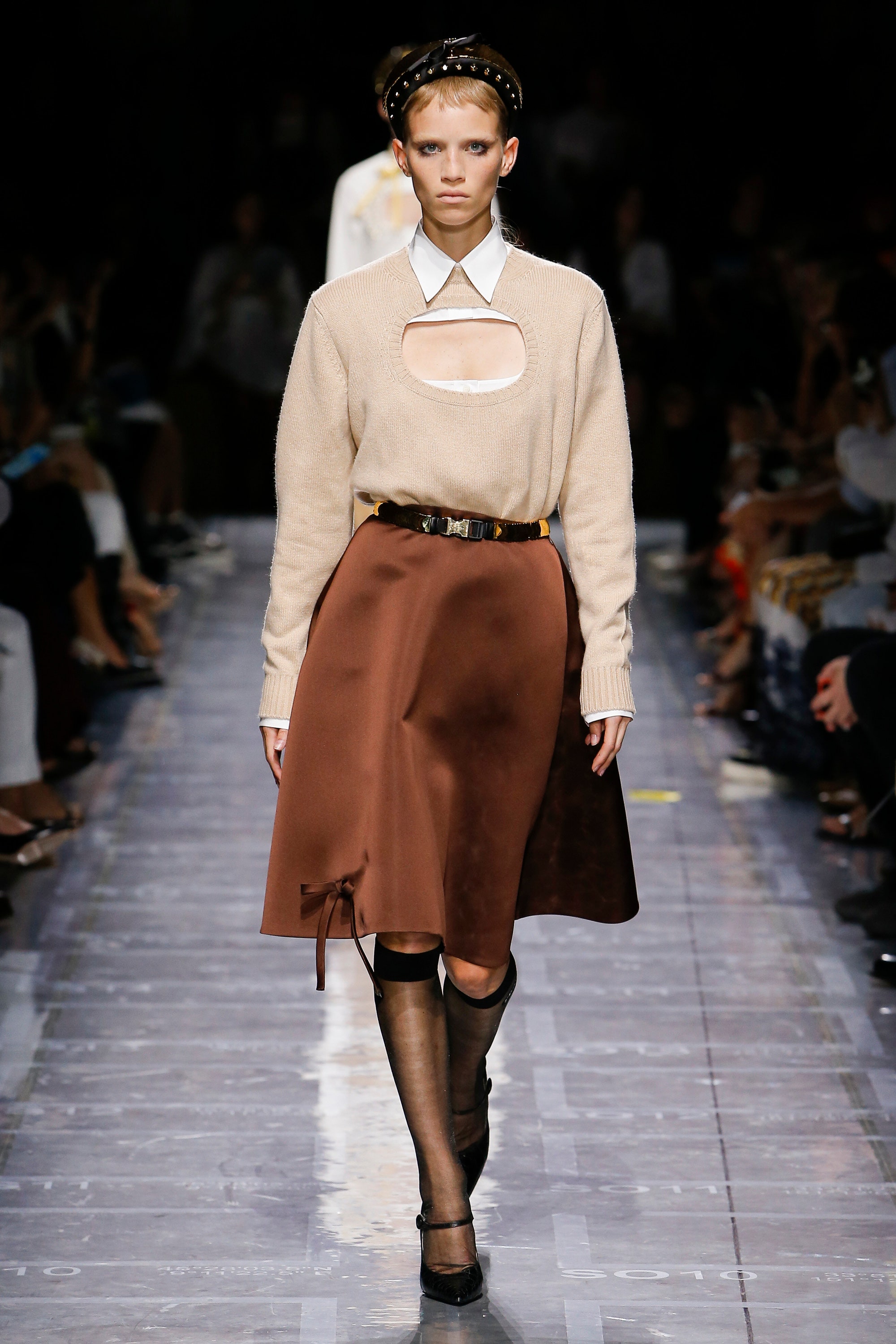 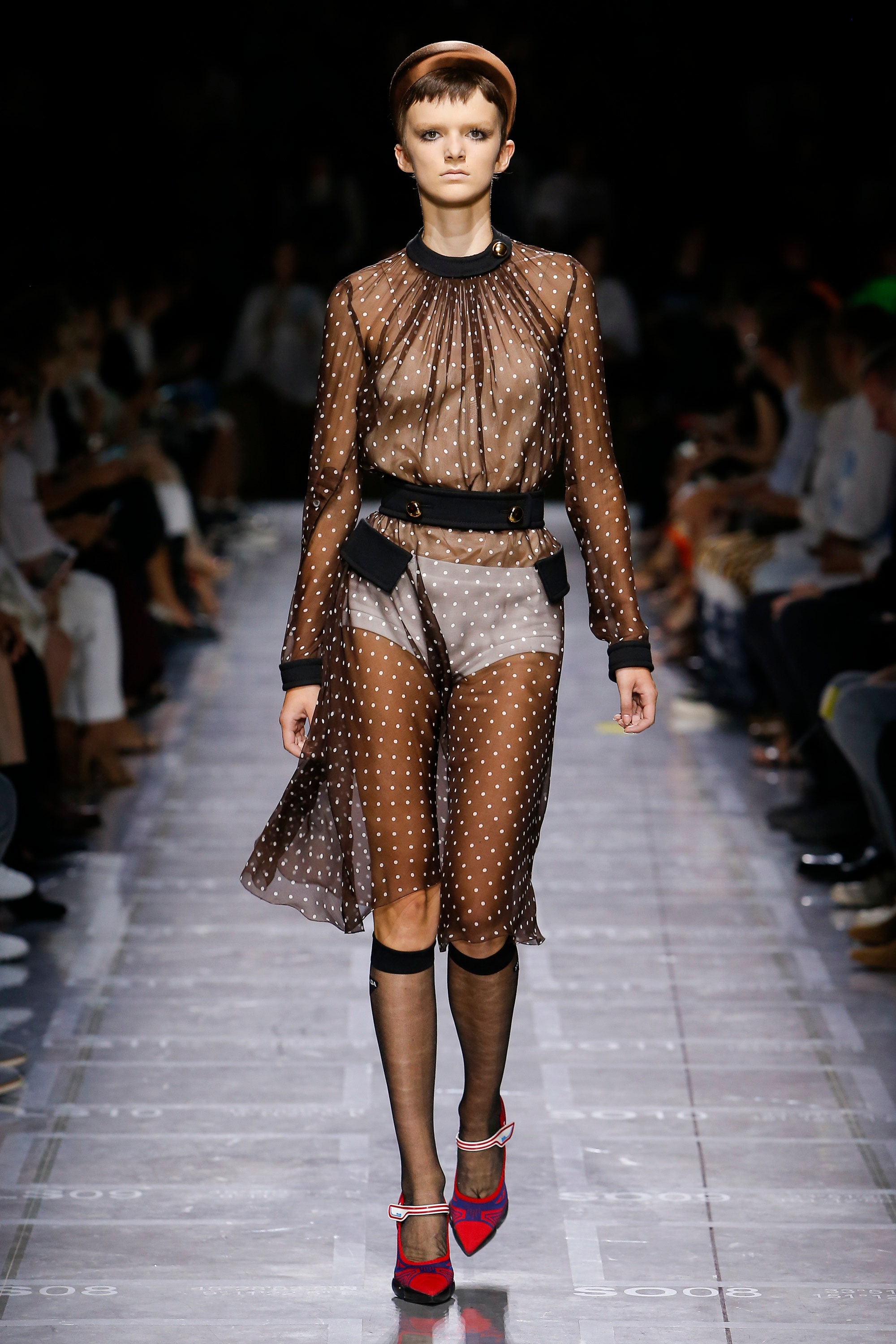 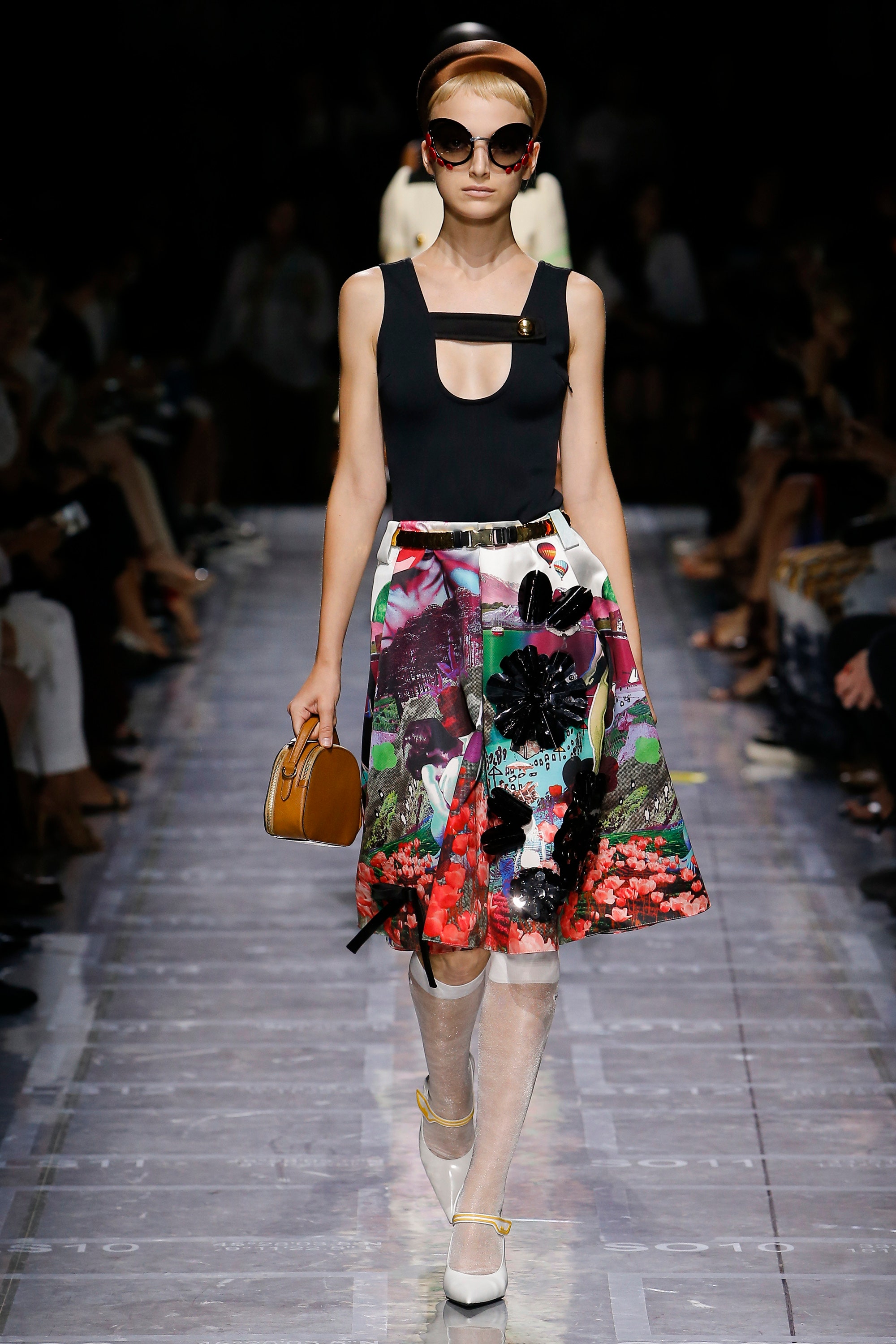 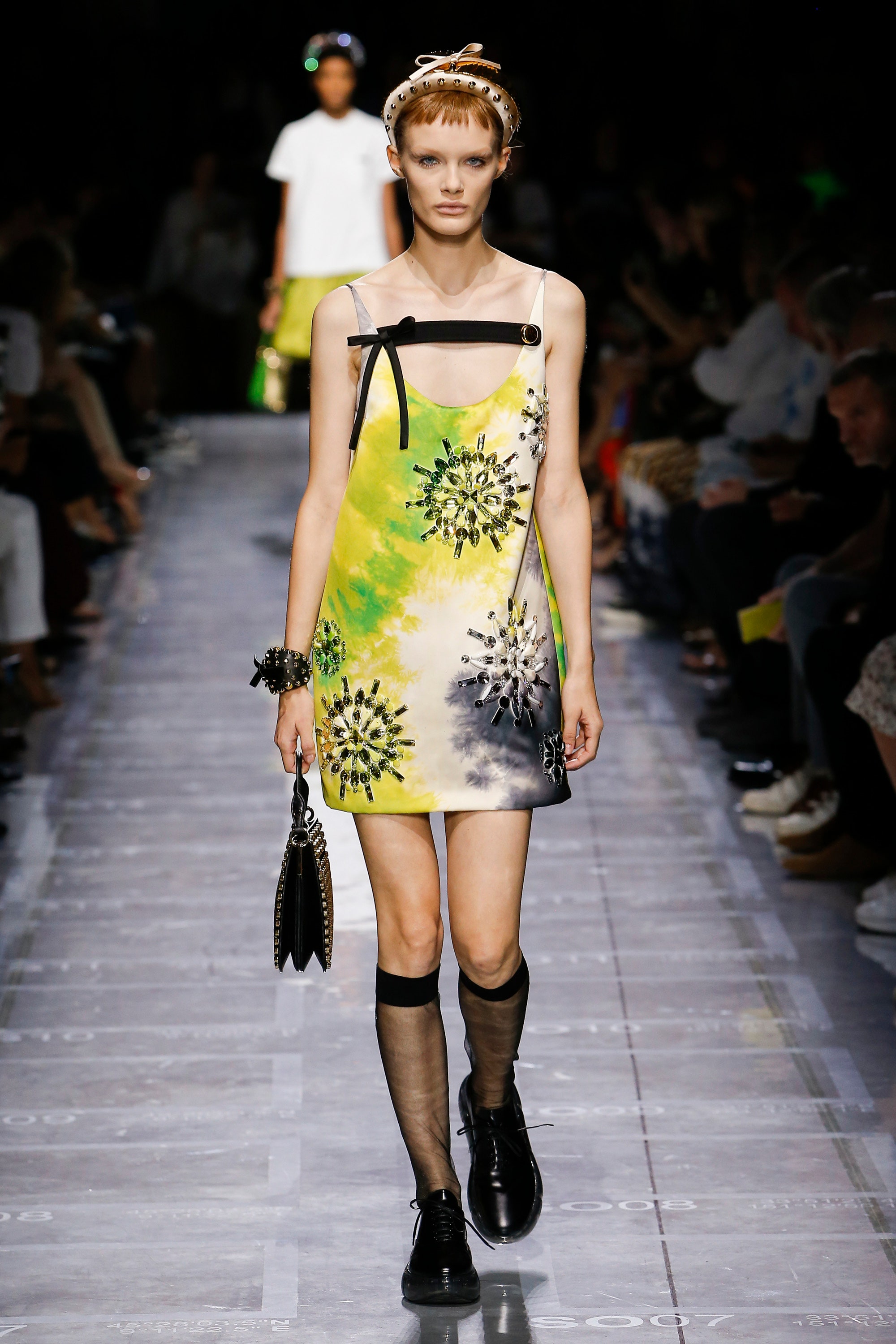 As for the show space, the Fondazione Prada is all new. This place is almost as large as a sporting arena. The floor is marked out in a grid and with each rectangle are the precise GPS coordinates for that space. There is bleacher seating at one end, for those who may not be directly a part of the fashion industry, and inflatable stools by furniture designer Verner Panton on the floor. Be sure to sit on those things carefully or one might bounce right off onto the floor. What distracted me the most, though, was the red/yellow lighting that looked as though it might be a reflection of not-so-distant flames. The broad-aisled layout felt a bit like a giant waiting room, which led me to question whether this might be what the layover for hell might look like. Except slightly warmer.

Ms. Prada also addressed that New York Times article that is critical of how home workers are treated in the Italian fashion industry. Her tone was a bit defensive.

“The real world is complicated with countless woes — hunger, pollution, corruption, so let’s not just dump on fashion. Fashion has its own faults, but not only fashion is guilty. We are all guilty, and then it’s a gradual process. It’s right to fight, but we need a bit of time.”

That was it. Miuccia was done for this season. She would much prefer people to focus on the clothes and on the artistry of the concepts. I’m not inclined to argue that point. If we put more effort into appreciating how art and fashion go together, perhaps we would be a bit less stressed by the politics. And we all could do with a little less stress.