When one thinks of the future the picture is likely to be rather gruesome and dark. We tend to not have a lot of faith in society’s ability to continue without destroying either itself or our planet, if not both. Space, that realm which the late Gene Roddenberry referred to as “the final frontier,” holds a neverending fascination for us but at the same time, we’re not thoroughly convinced that our adventure our there is necessarily a pleasant occurrence.

For their sophomore collection with Jil Sander, creative team Lucie and Luke Meier tap that fascination with what lies beyond but they want us to do so with a more positive outlook than we might inherently feel. Luke explained: “We imagined going to space but taking a lot of things with you that make you feel comfortable. Things you have an emotional connection to, that make you think of home. A very human touch.”

Lucie followed up: “It’s… I wouldn’t say a reality, but you speak about it much more so it becomes more realistic. Going to space in a cozy, comforting way.”

Certainly, as the runway presentation began with a series of white ensembles reminiscent of a sterile environment, one gets the space motif rather quickly. The minimalist aesthetic is so fitting for this theme that it’s a bit surprising that the concept hasn’t been explored prior to now. What’s interesting, though, is that where many designers might also look to space-age fabrics in creating such a forward-looking collection, the Meiers stick with all-natural fabrics. The first look down the runway is wool and organza. and even with the down jackets and duvet wraps that follow everything has a human feel, avoiding any direct references to machinery or artificial construction. This means the pair have created some very intense fabrics, mixing threads of silk and cotton and wool in very precise measures.

The Meier’s version of space is soft and well padded. Silhouettes are significantly more bulbous and rounded with plenty of room for air between the skin and the fabric, almost as though gravity is nonexistent. In fact, that concept of weightlessness extended to the beauty look with hair braids that seem to float in place, a look that’s a bit unnerving when it makes its first appearance. While the palette doesn’t stay white, the looks do stay clean for the most part. There are some arm treatments in a few pieces that seem a bit excessive but for the most part, the lines are as clean as any Starfleet uniform. 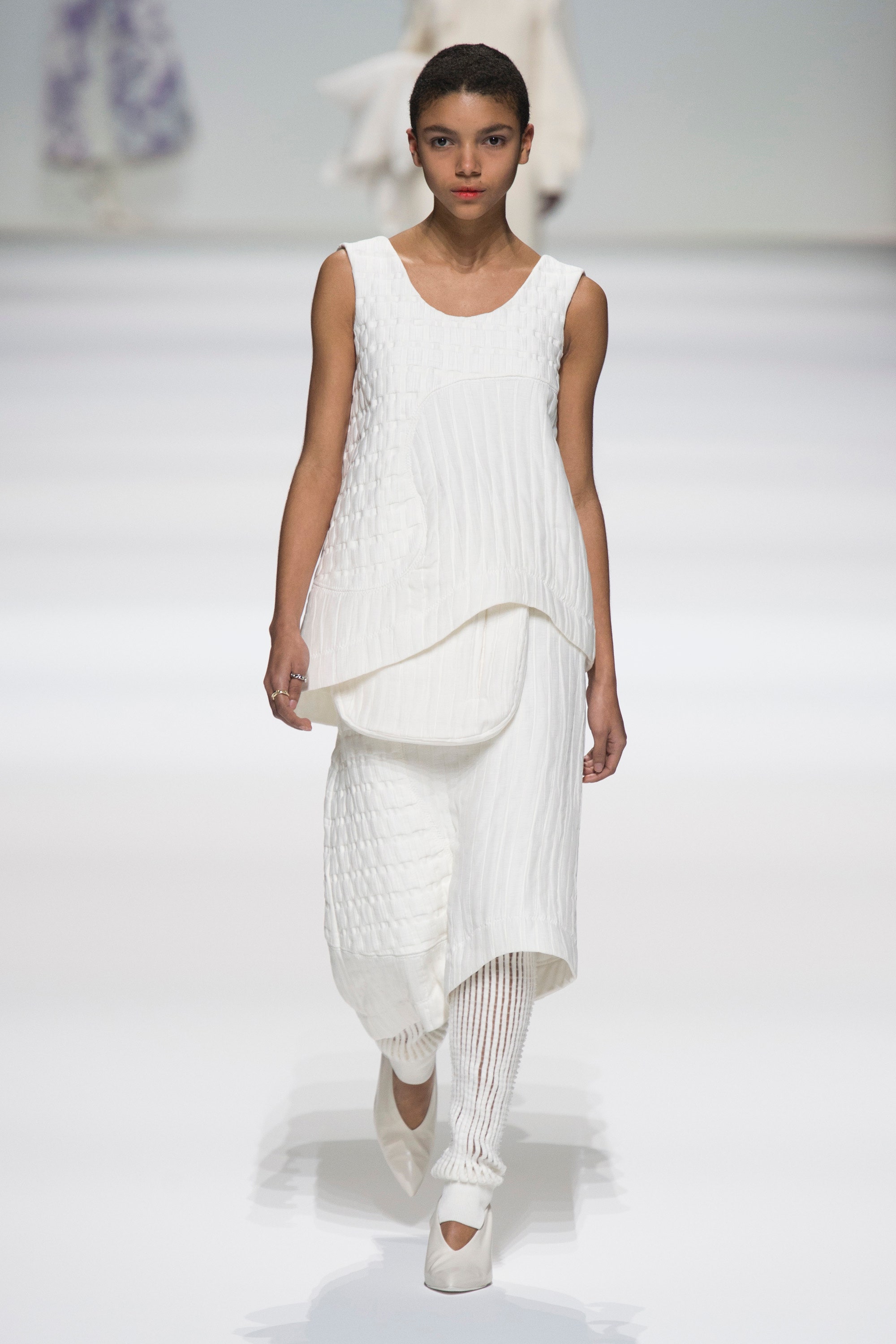 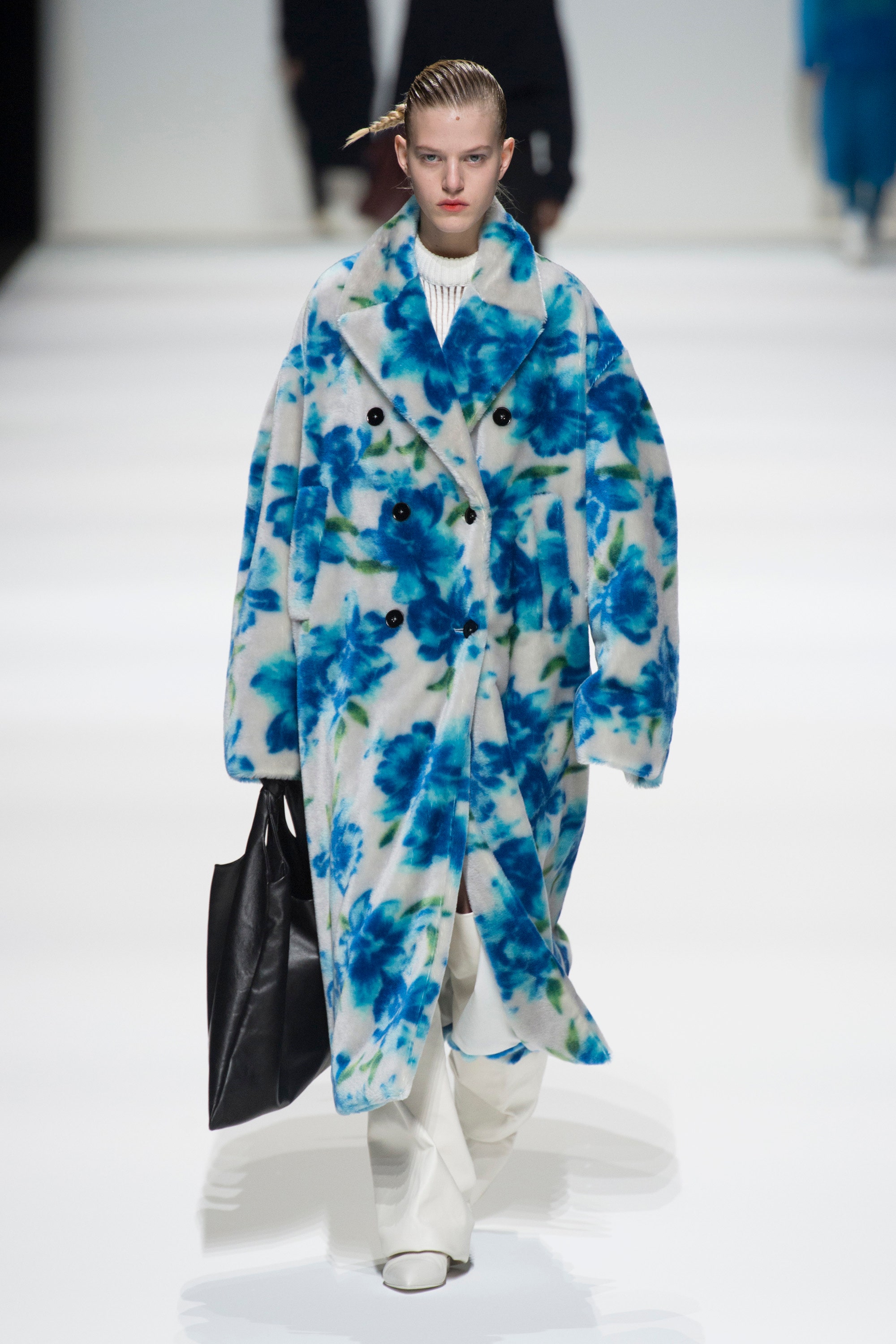 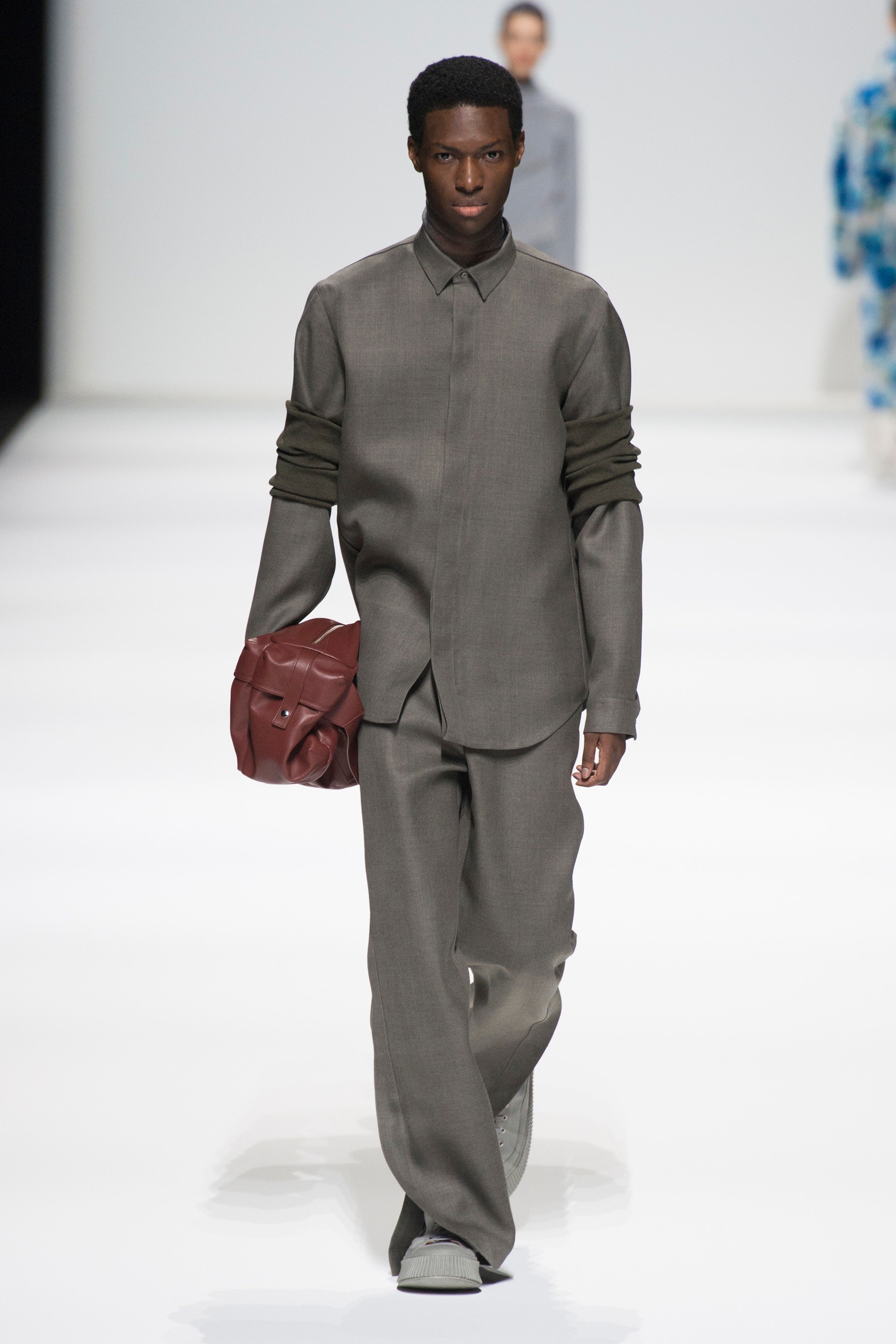 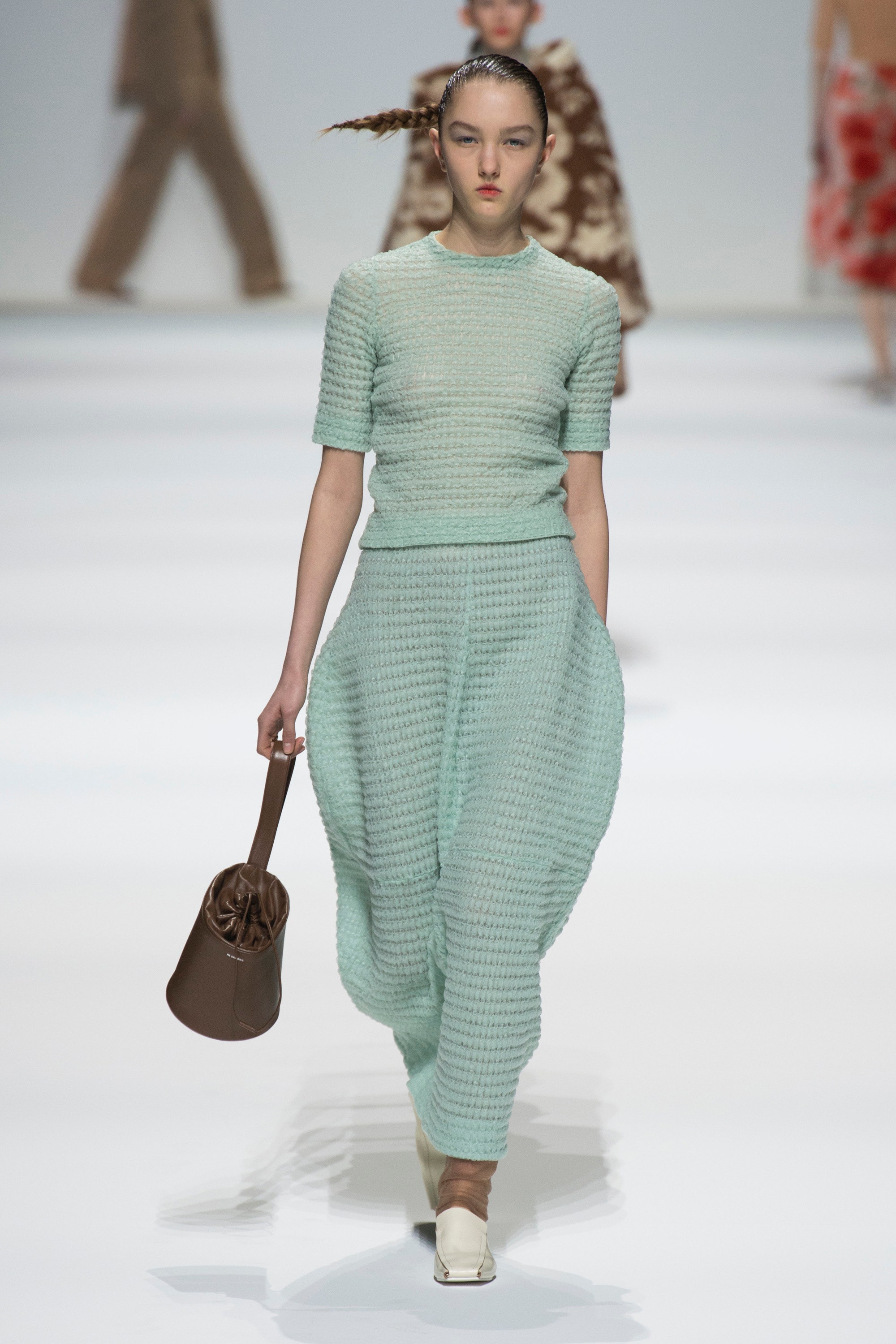 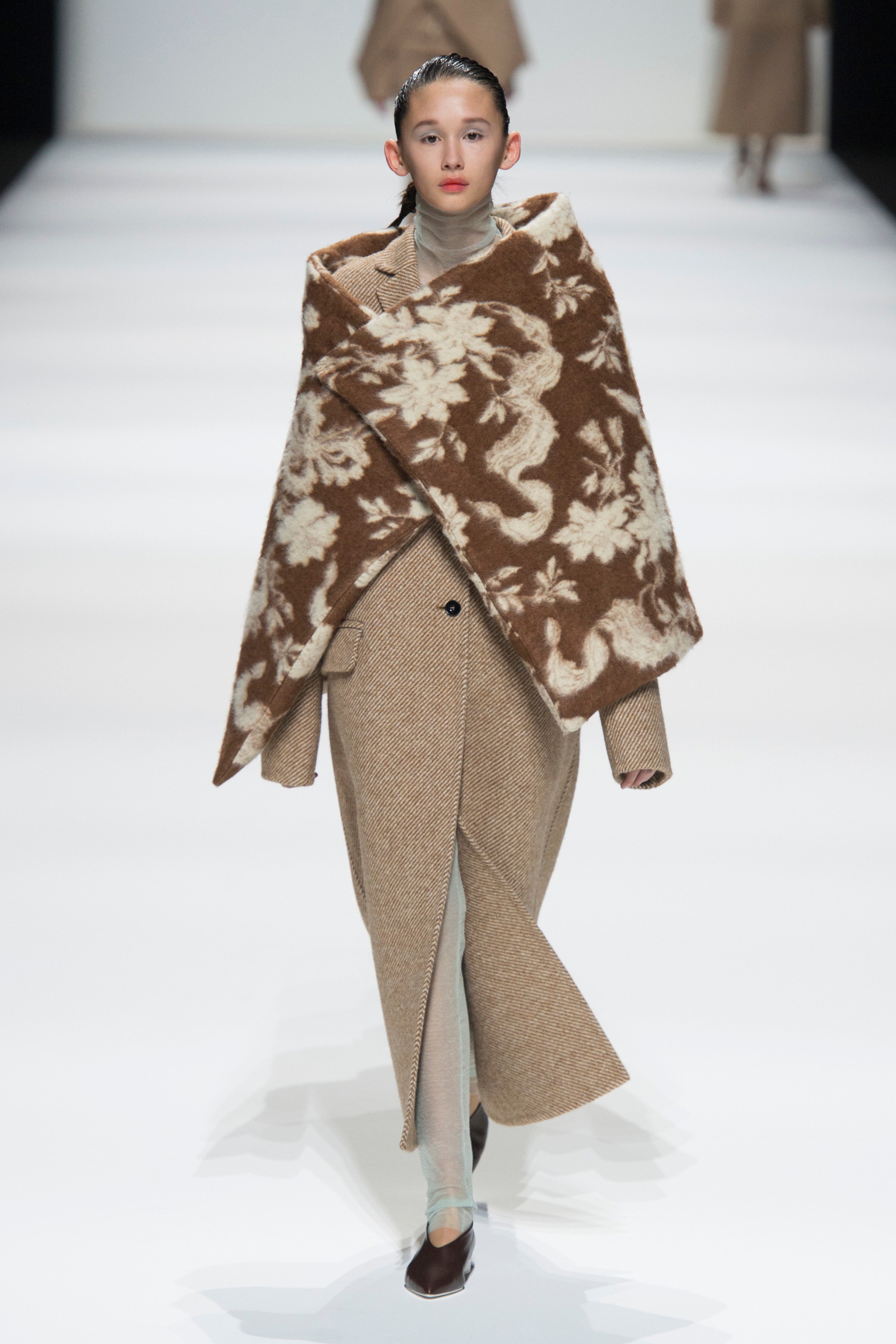 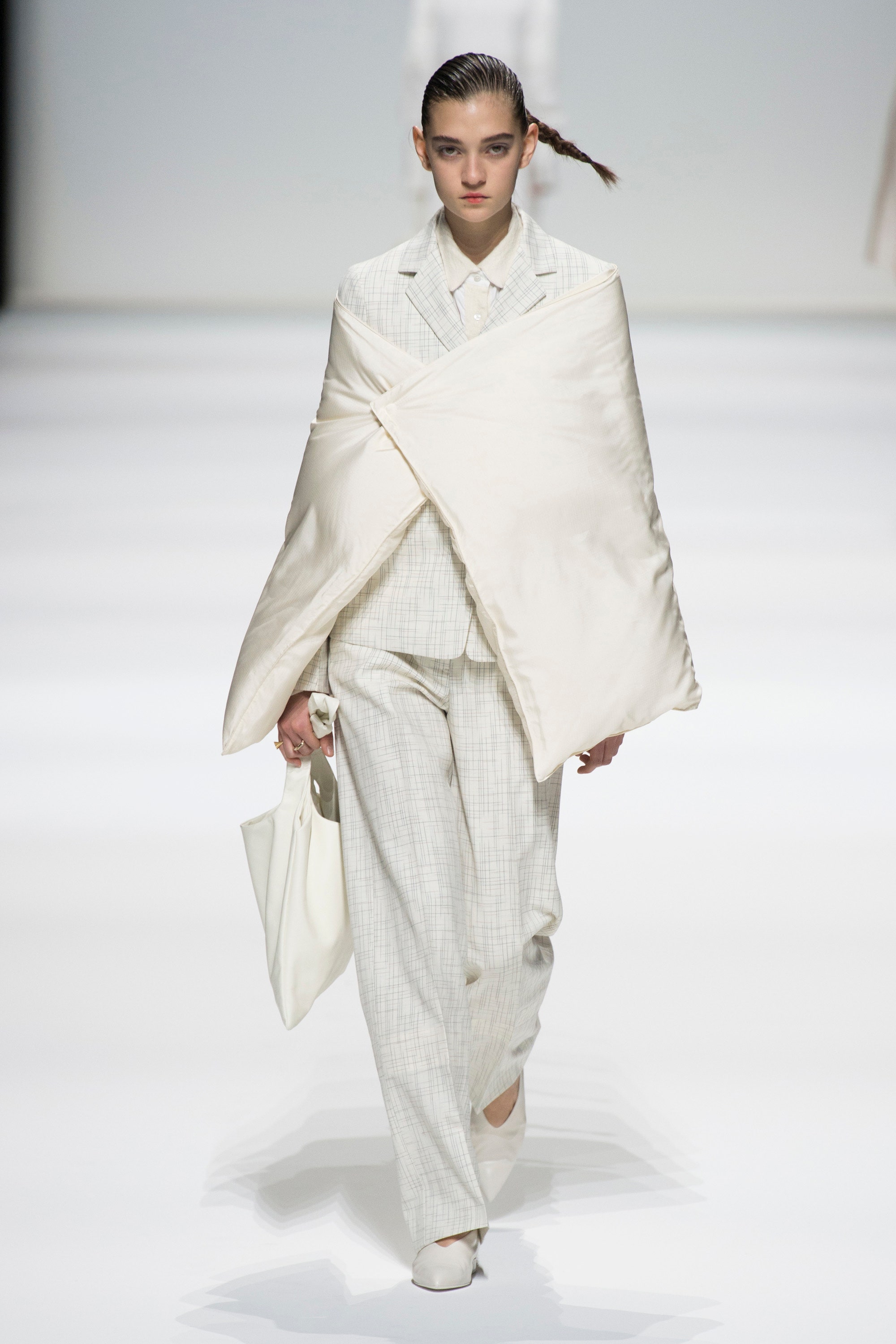 Where I have problems with this collection is largely a textural thing. Jacquard feels out of place here. While the looks are interesting and look nice, they don’t fit the whole space theme all that well. I’m not especially enthused with the whole duvet-wearing thing. Do we need extra padding in space or do we anticipate being able to curl up and take a nap at a moment’s notice? The extra bulk on top of already full silhouettes seems a bit excessive.

Still, for the greater part, this kinder, gentler view of the future that the Meiers have created is attractive. As if to drive home the point, an antifascist protest happening outside the venue delayed several guests, hindering their ability to get into the venue and causing the show to start even later than the defacto 30-minute delay one expects. With so much political turmoil and upheaval going on around the world, the concept of escaping to a space that is soft and clean becomes quite appealing.

Lucie and Luke Meier show us that they have a strong grip on the Jil Sander house aesthetic and understand its DNA. We also see in this collection a glimpse of how they might move forward. They are very attentive to the little details which is likely to translate into even more intricate fabrics than we’ve already seen. With such a strong start they give us a lot of hope for the future.

0 replies on “MFW: Jil Sander A/W Looks To The Future”