There are times when designers push the limits to see just how far we’re willing to let them go. Emilio Pucci’s A/W 17 collection would seem to be one of those times.

You remember Sid and Marty Krofft, don’t you? They were a Saturday morning fixture during the late 1960 and early 70s. They produced some of the strangest live-action programs ever, with H. R. Puffenstuff, Sigmund and the Sea Monsters, Bugaloos, Land of the Lost, Electrawoman & DynaGirl, and Magic Mongo among the many titles. The brothers were often accused of having to be on drugs to create some of the wildly vivid and colorful puppets and costumes they produced, but they always denied those claims stating that, “you can’t produce this stuff when you’re stoned.”

So it is with this collection. While we would never accuse anyone of being under the influence of mind-altering drugs, one definitely comes away with the feeling that such a thing could have happened. The colors are extremely vivid, the patterns are wild and loud, and the silhouettes are, uhm, definitely not like anything else you have in your closet, including those old Halloween costumes.

We’ve already seen some lengthy fringe a few times this season, but Pucci wins the award right off the bat with a lime green two-piece ensemble where the fringe starts at the end of the sleeves and stretches to the floor. We’re thinking this looks like someone might have crossed Witchiepoo on a day when her magic wand wasn’t working quite right. Hands just disappear and one is stuck with limp fringe the rest of their life. 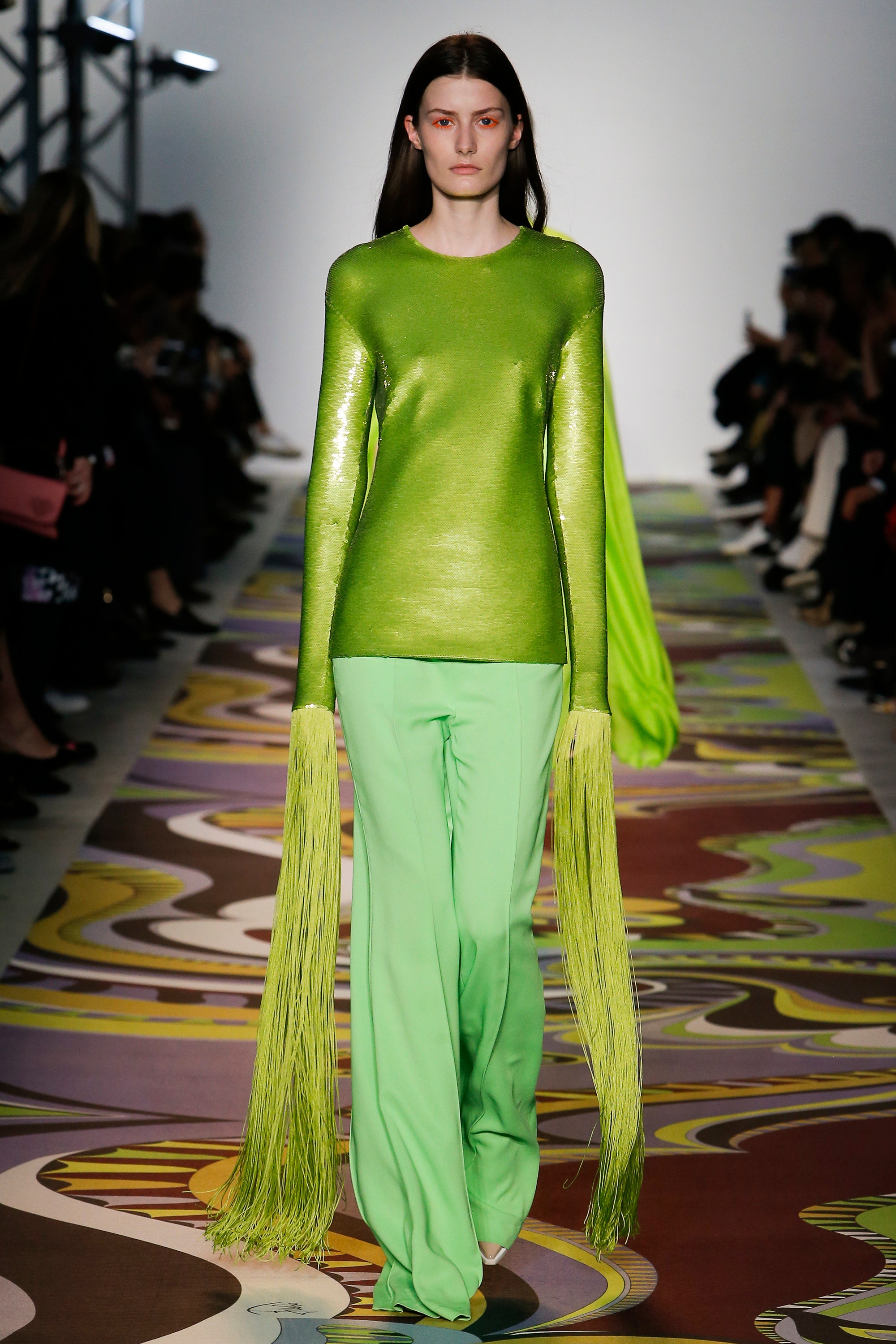 I wish I could say that Pucci just uses the fringe look for a piece or two and then moves on.  There’s something close to a metric ton of fringe in this collection and if you thought the first look was interesting, wait until you get a load of the head-to-toe, you-can’t-see-me, paisley fringe. C’mon, how does this not get excused as a lovable yet misunderstood monster that is certain to haunt the dreams of any small child who sees you dressed this way? 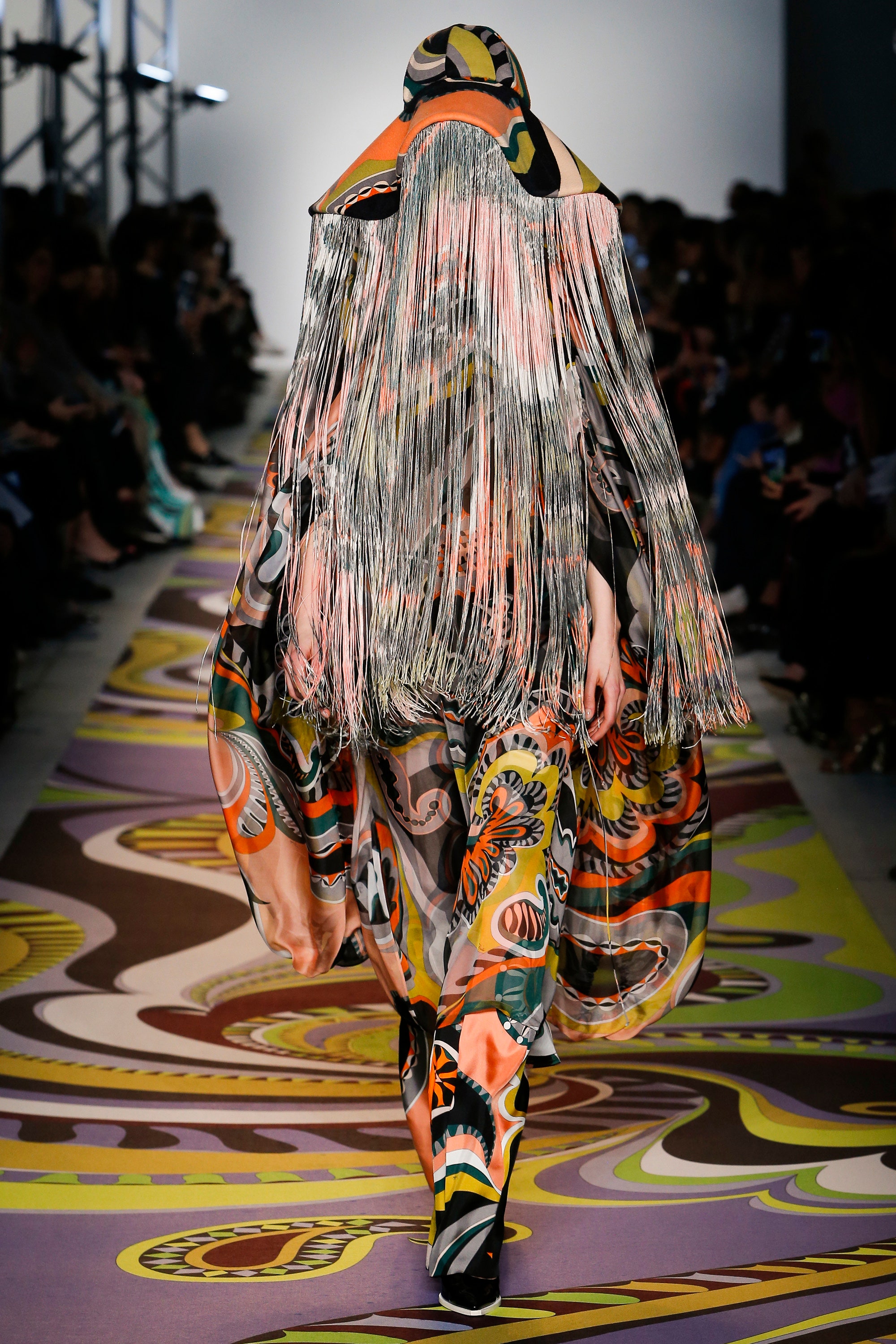 Oh, wait, I’m not done. Anyone near my age probably remembers the Sid & Marty Kroft show Sigmund and the Sea Monsters. That show went off the air some 40 years or more ago. Yet, somehow, some way, Pucci was able to resurrect one of its characters. I’m not sure which one, but don’t tell me this look doesn’t leave one looking very much like a sea monster. No word as to whether it will come in any other colors, such as green. 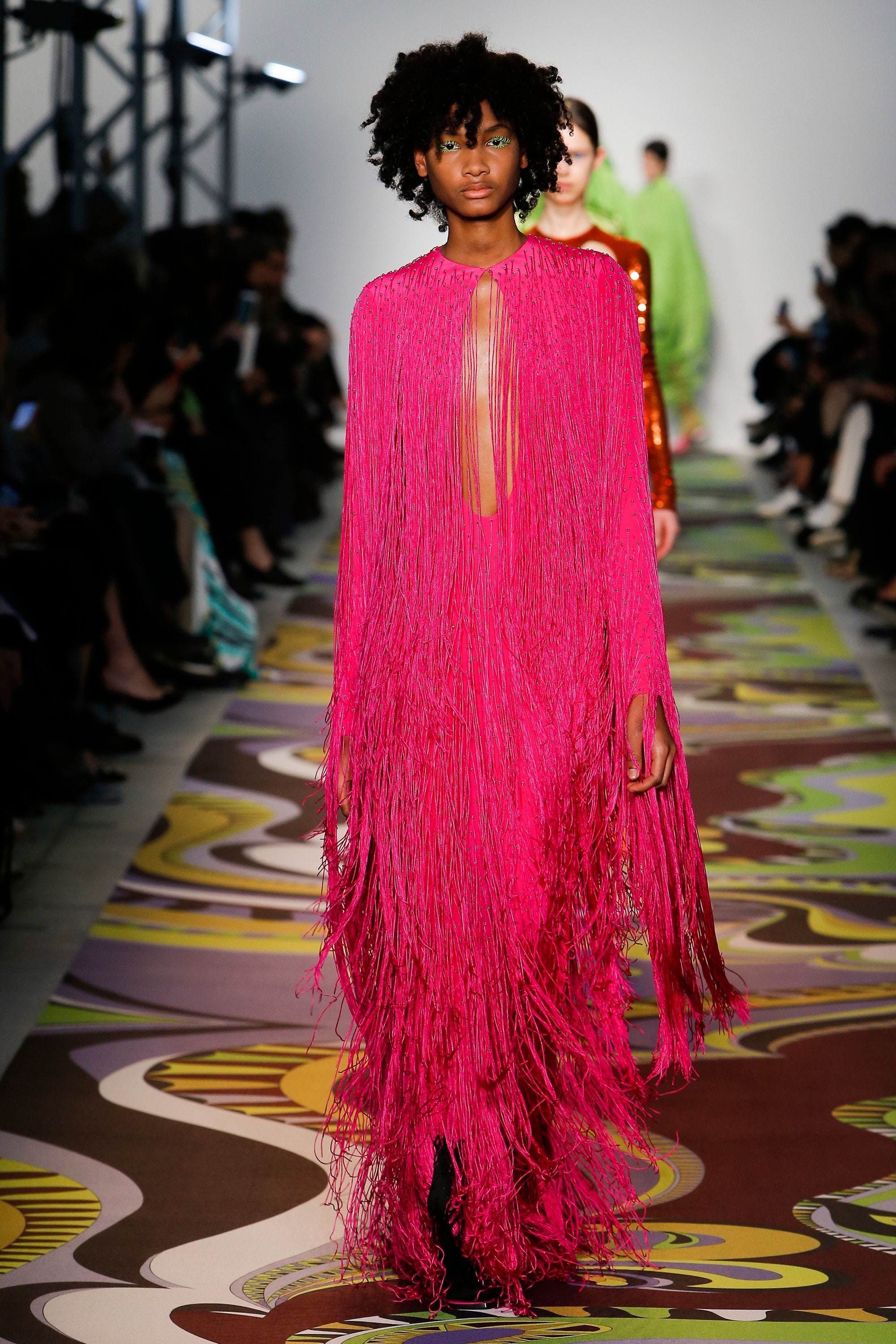 When he wasn’t drowning everyone in fringe, Pucci was blinding everyone with overly large paisley prints. Now, I’m often a fan of paisley prints when they’re small and neat and used as an accent rather than the feature. I once had a purple paisley necktie that was quite attractive. But paisley has a limit and I’m pretty sure Pucci exceeded that limit rather quickly. Please note that the look below STILL has fringe at the ankle strap of the shoes. 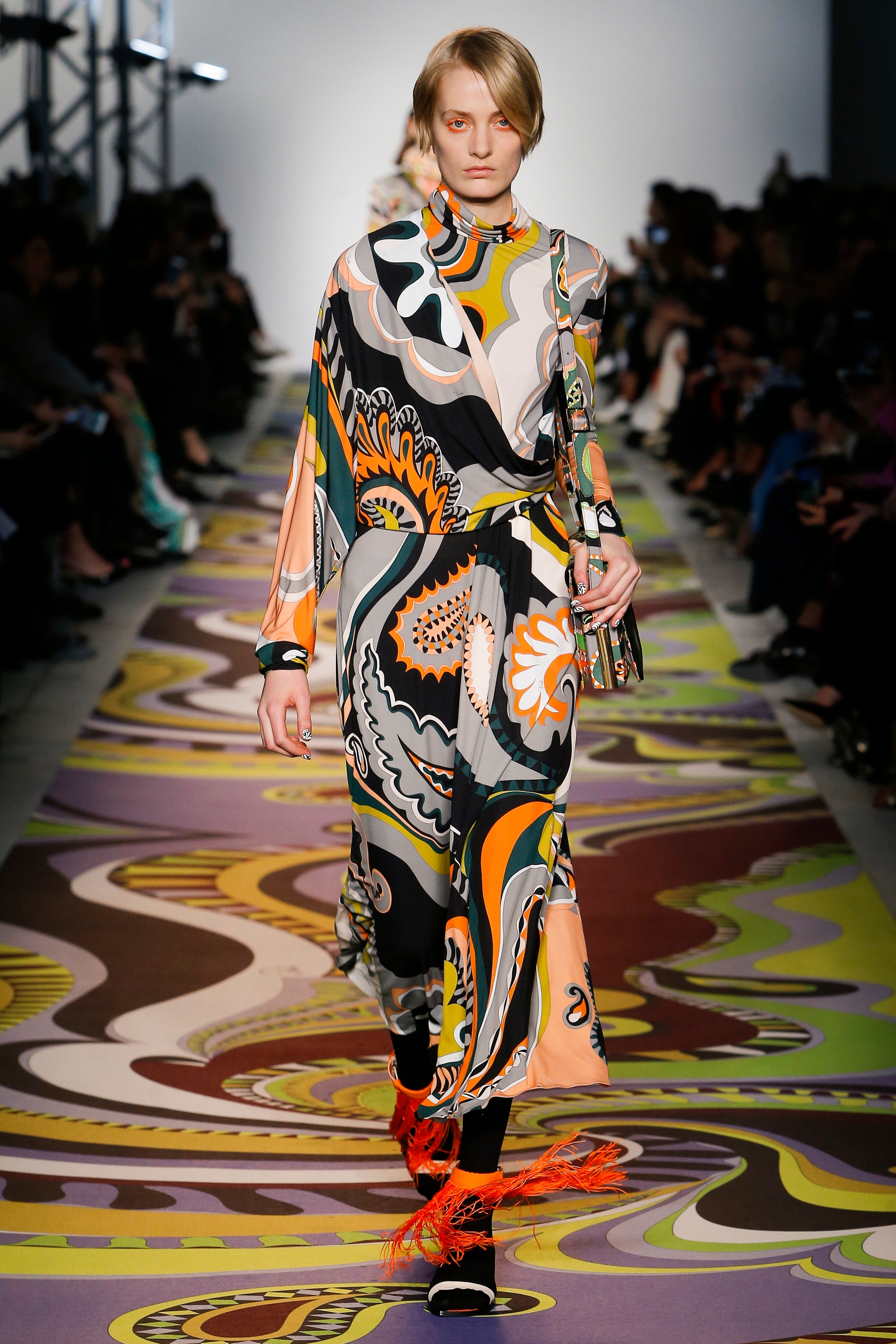 Fortunately, not every look in the collection brought tears of fear and desperation to my eyes. This gold lamé-looking chain mail dress may not be your first choice for tomorrow’s board for directors meeting, but the futuristic look could be just the thing for your next symphony fundraiser or some other charity gala. 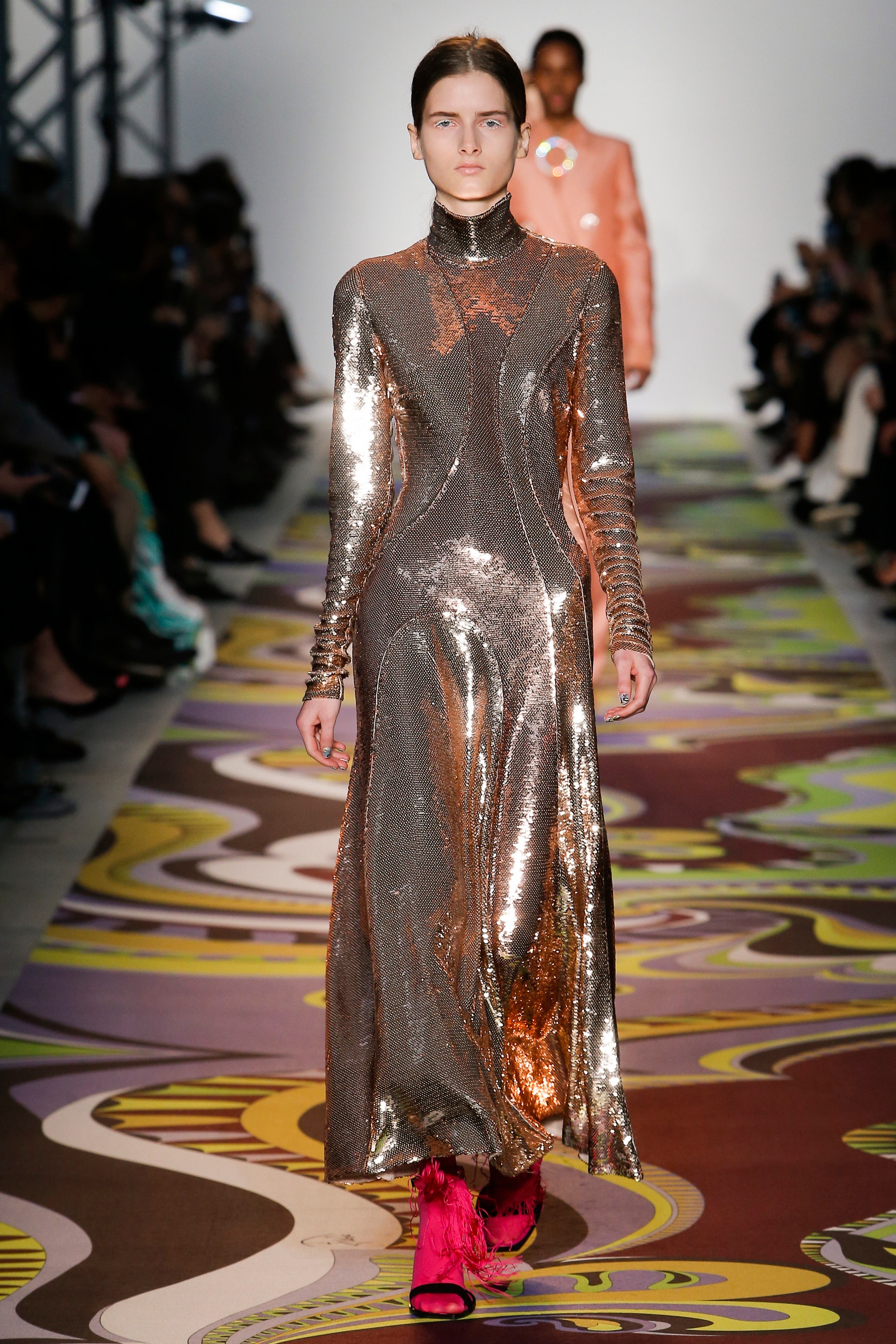 If one is looking for something a bit more office-appropriate, be sure this double-breasted peach colored suit with matching sweater underneath. Yes, the ring at the top is a bit much for some situations, but the suit has a strong look to it and for confident women who know what they want this suit communicates their intentions well. If it makes any difference, a similar suit is available in periwinkle as well. 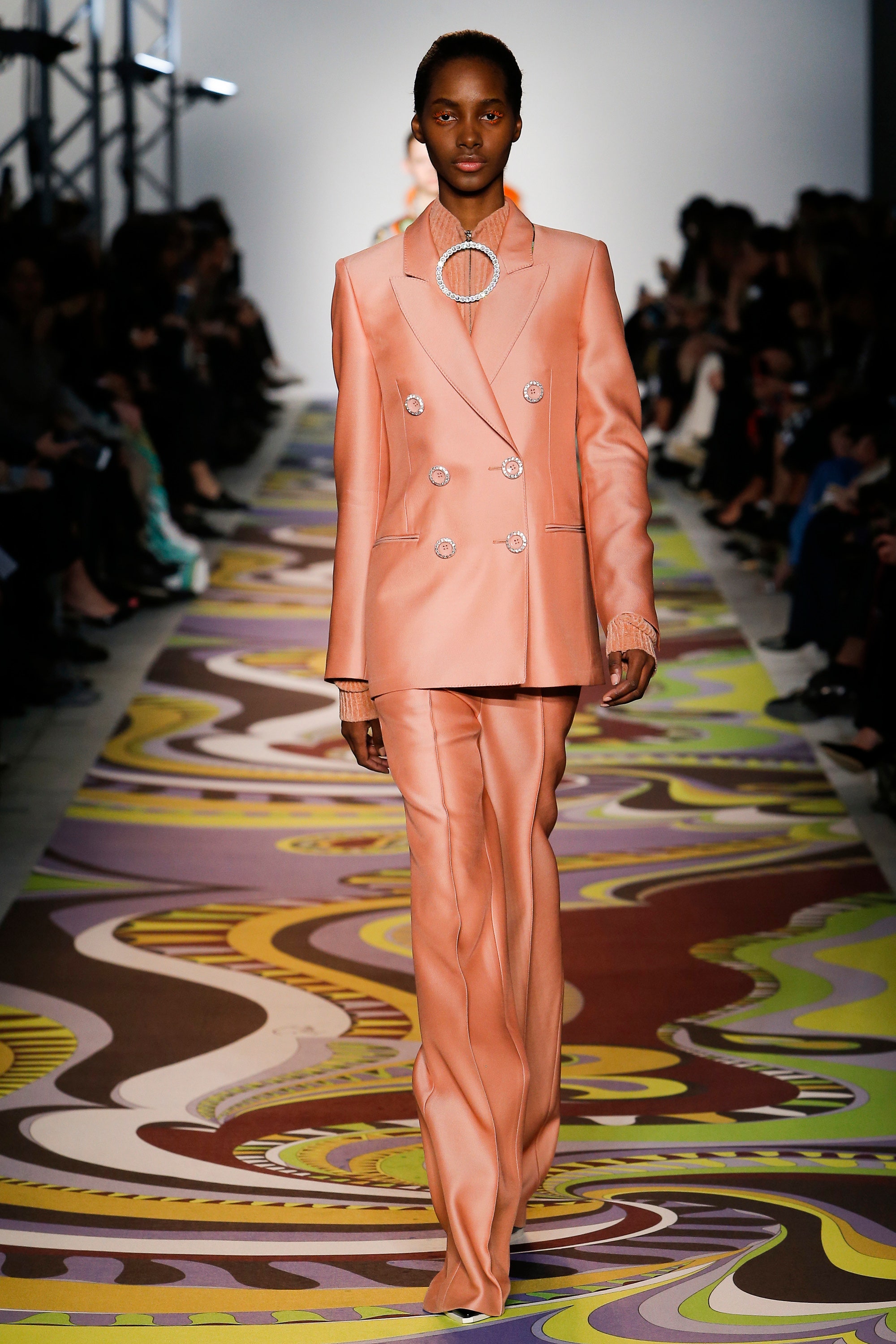 There is also a solid black jumpsuit in the mix, but an inverted teardrop cutout in the chest limits the situations where it might be appropriate. Outside those three looks, one is going to have to consider saving most of this for a costume party of some type. When he shifts from paisley to wiggly lines, my brain screamed in retreat and went out for Taco Bell. That seemed about the only thing to do with looks that might have come from Elton John’s castoff pile. 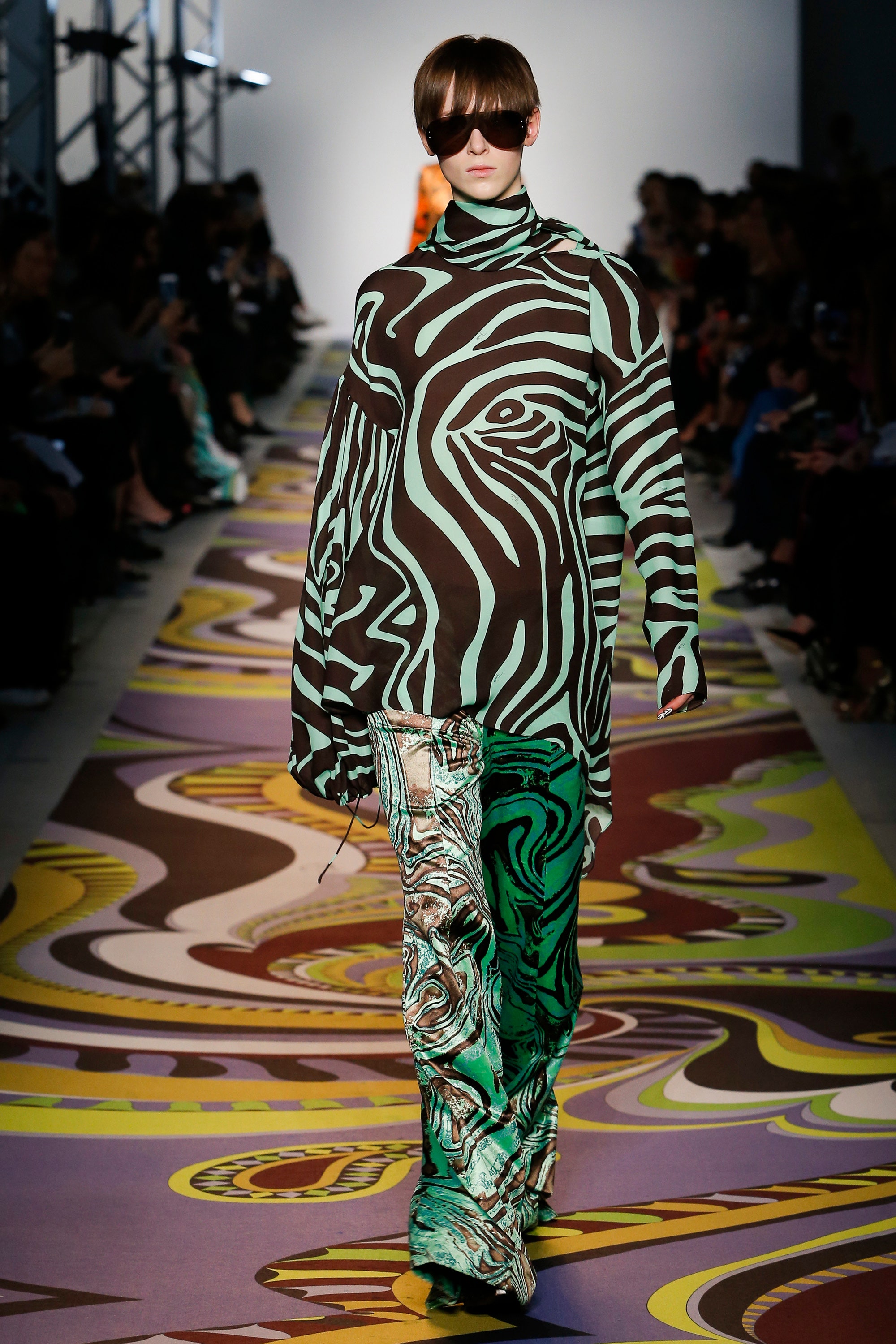 Of course, every designer has their die-hard fans and there were a sufficient number of people professing their love for this challenging collection on social media. I’m sure there are plenty of people who will find some excuse to drop a couple thousand dollars on one of these ensembles. And should we happen to see one out at a social gathering, we won’t embarrass anyone by asking what they’ve been smoking.

We’ll just down another shot of scotch and keep walking.