Over the past several seasons, the formula for a Dolce ^ Gabbana show has become predictable. Choose a theme that projects Italian heritage, play campily to that theme, toss in some little kids, and don’t forget the millennial-focused athleisure pieces. Because fashion is having a full-on old school glamour moment this season, the design duo ditched that formula in favor of a 1950s salon presentation, complete with an announcer at a podium introducing and describing the sections of this massive 127-look collection. While a few people derided it as lacking enthusiasm or wit, the fact is there might have been five people in the audience who had actually witnessed this format in person. Even the designers themselves were born after the salon shows had been dropped in favor of a more music-driven runway. As such, this was a level of old school that felt new and was in stark contrast to the drones that carried handbags down this same runway a year ago.

What a difference a year makes. Whereas last year’s front row was heavy with social media influencers and young actresses, none of those were present this season. Perhaps all the actresses were in Los Angeles for the Oscars but the absence of those influencers makes a strong statement about the direction the label is going this season, and possibly for some time to come. One gets the feeling that there was a massive awakening among designers between last season and this one. For this duo, the related the moment when fitting models for their men’s show last month when a young man admitted that he had never worn a suit before. Ever. To him, that level of glamour was a major life milestone. Domenico reflected:

“I think, after all the sportswear and sneakers, everybody’s lost the idea of elegance. When we work with the new generations, we now understand that tuxedos and brocades are aspirational to them. At first they were asking if they could have the sportswear, but eventually, they wanted the tailoring,”

So, they named this collection “Elegance” and dropped back to a new level of classicism that dropped most the campiness that we’ve seen in previous seasons and focused on well-tailored, carefully considered clothing that doesn’t play down to where the designers think its shoppers are. Instead, they elevate the looks to where they think women, specifically, want to be. There are no men on this runway and the children were left at home this season. Perhaps most amazing in this season where it seems as though everyone is bringing a mature model out of the mothballs, the duo skipped on that mechanism as well.

Divided into eleven sections, each set addresses a certain area of need in a woman’s wardrobe. There are some classic suits and tuxedos, floral print dresses,  dressing gowns trimmed in fluff, animal prints, tweed and Prince of Wales checks (another must-have this season), brightly colored jewel tones, amazing jacquards, and intricately stitched collages, couture-level wedding gowns, and shimmering sequin-drenched red carpet looks suitable for any awards show on any continent. There was so very much to see that the sheer spectacle of it all drowned out some of the incredible detail work such as dresses from two distinctly different periods merged into a single look and heat transfers of actual flowers on some of the floral prints. It would take several pages to describe all the wonderful little surprises hidden throughout the collection.

Here are just a few looks from the runway. 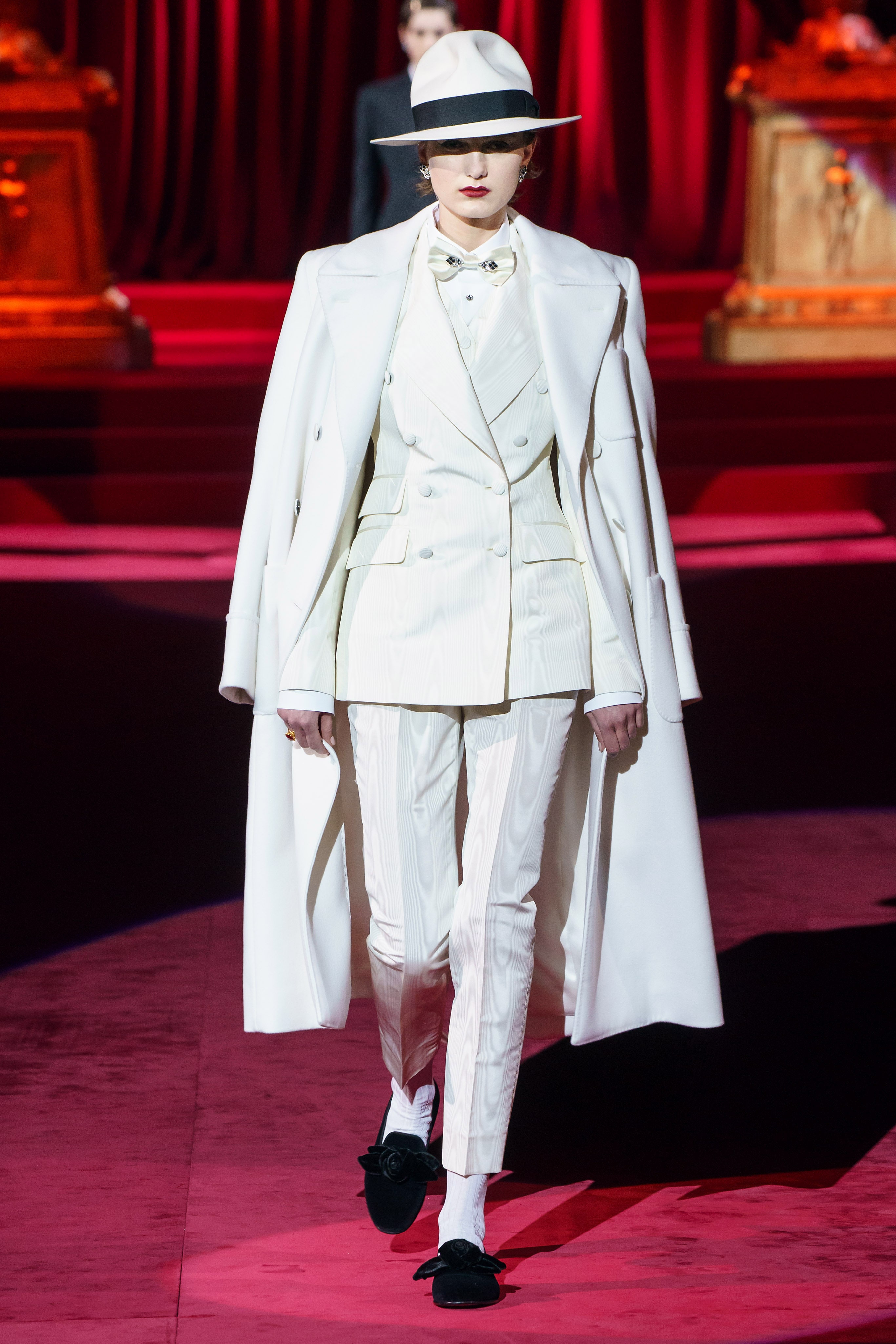 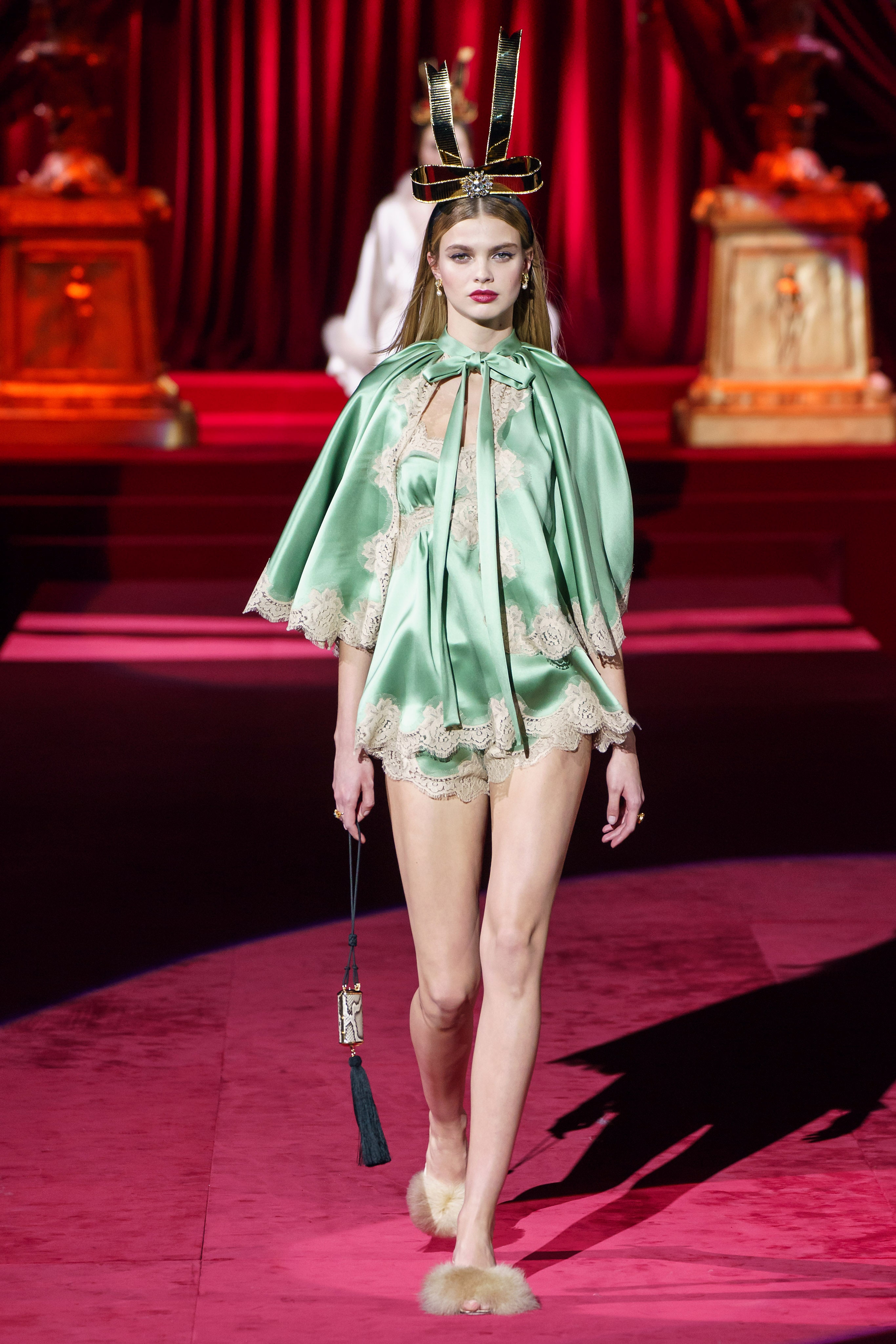 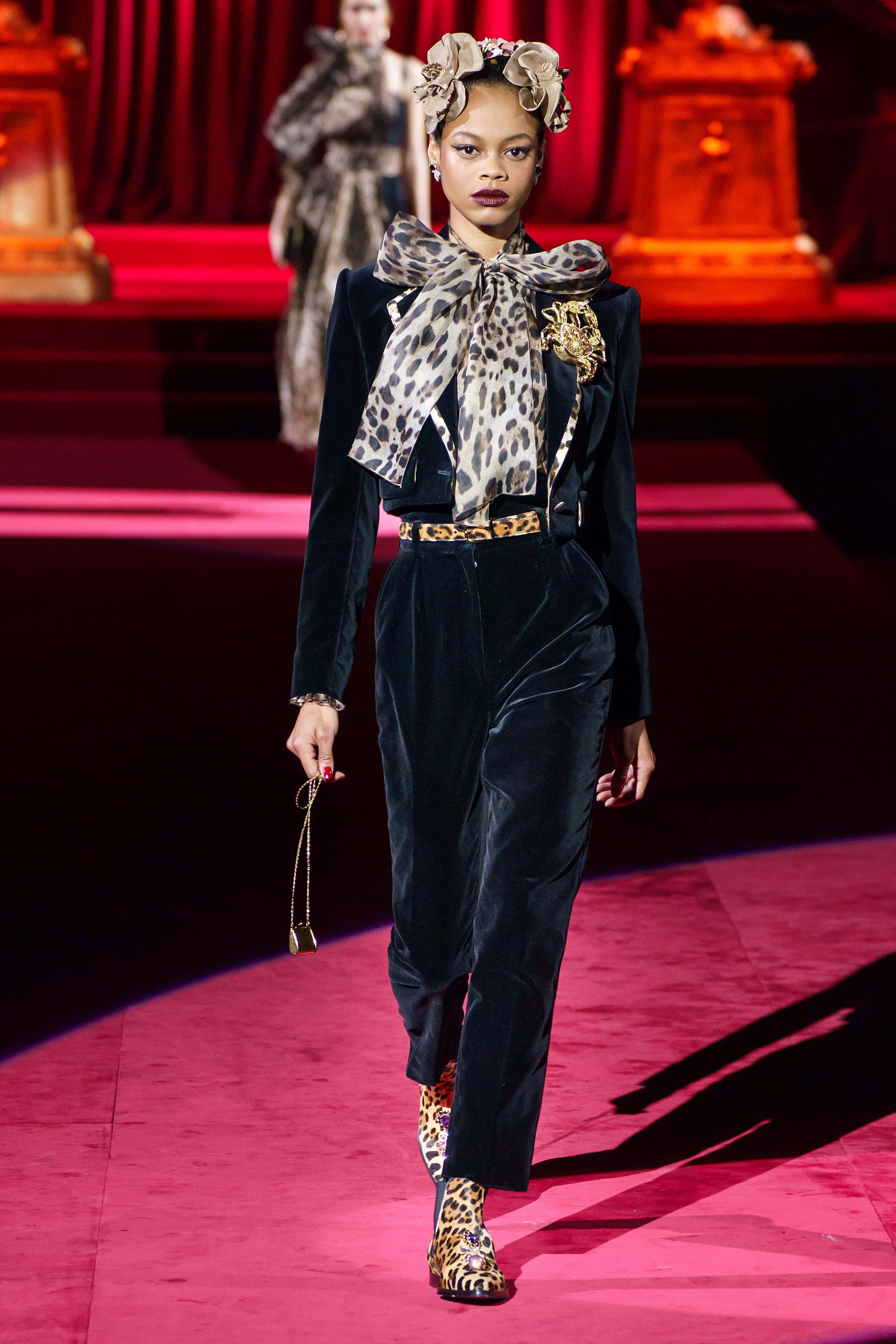 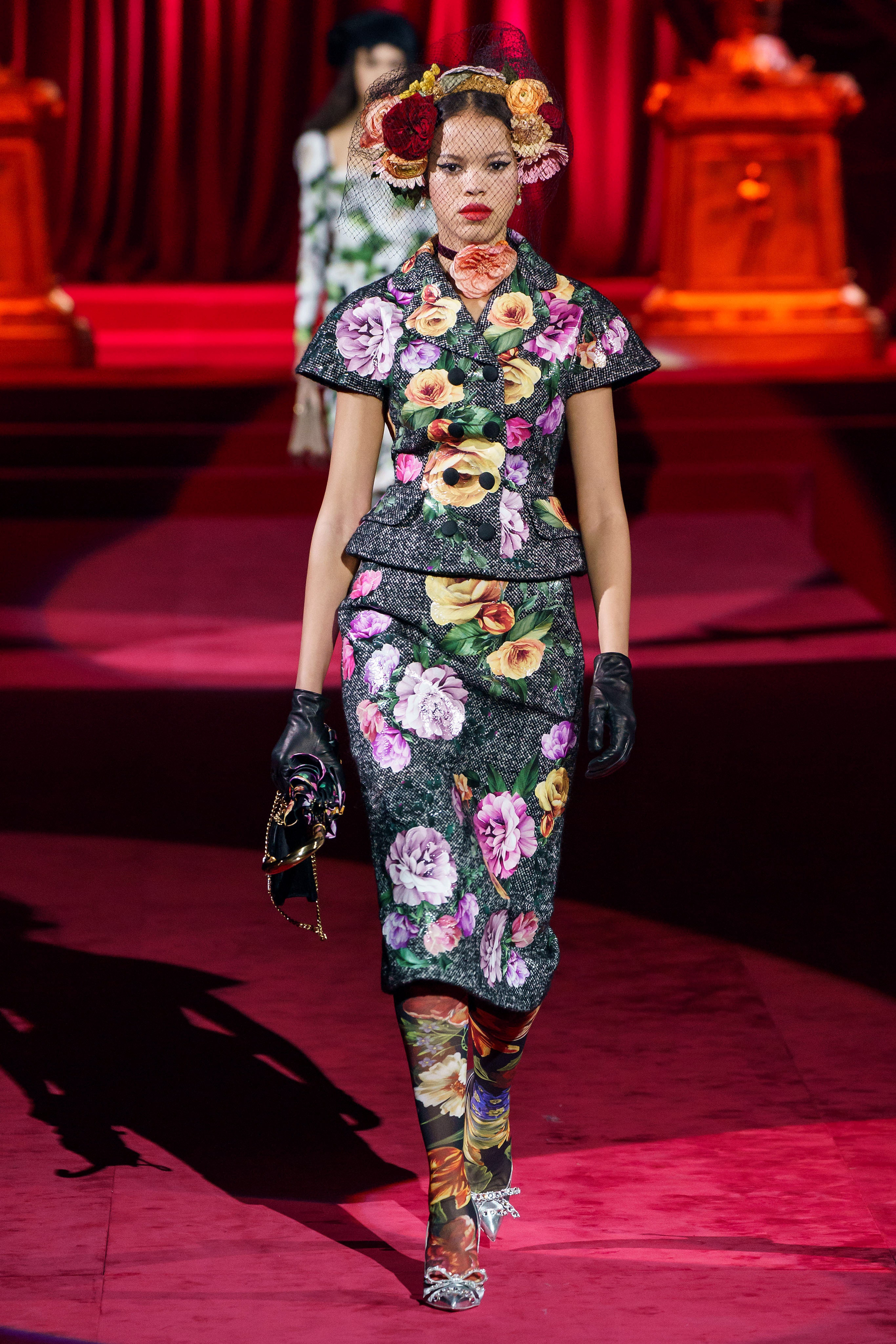 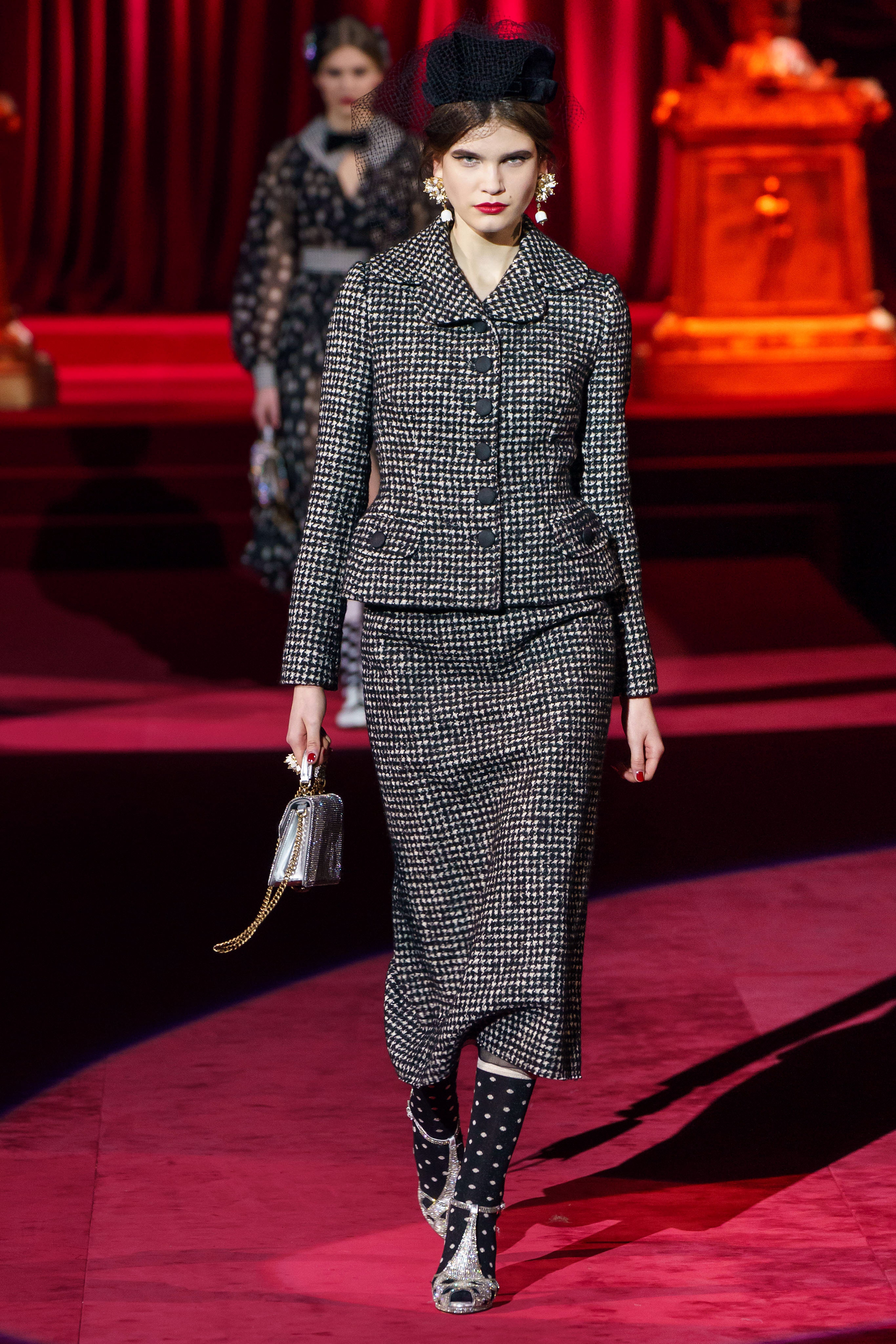 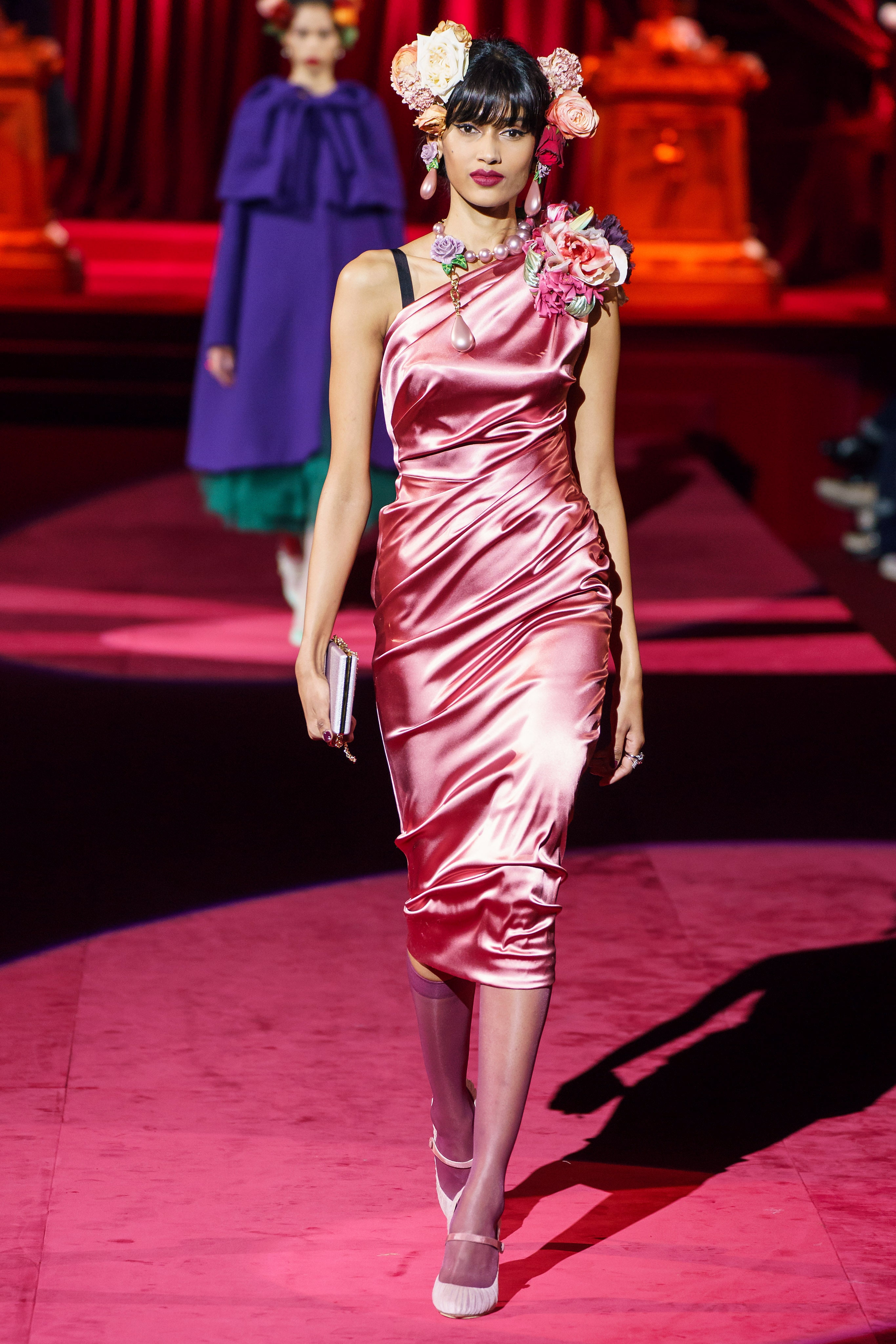 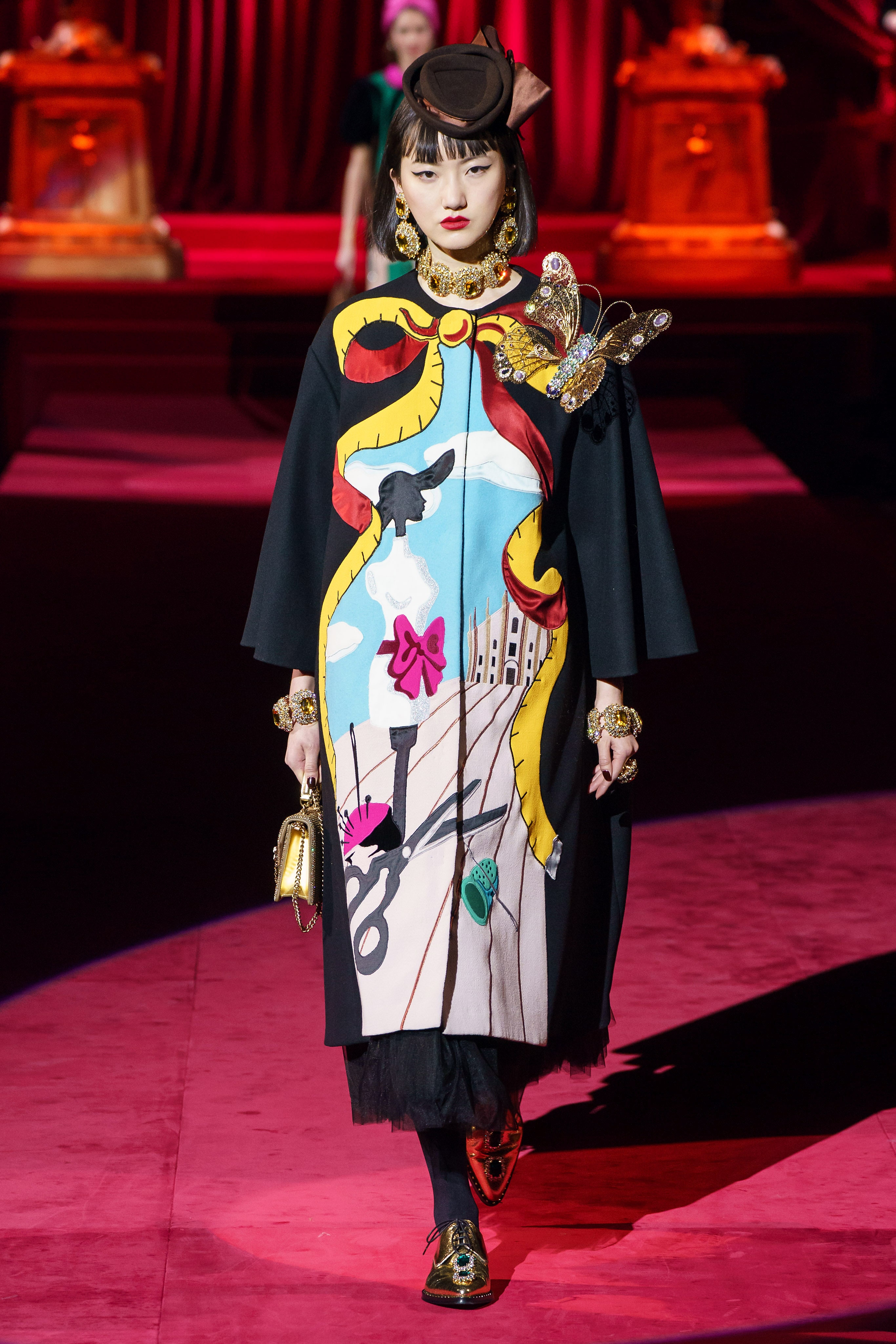 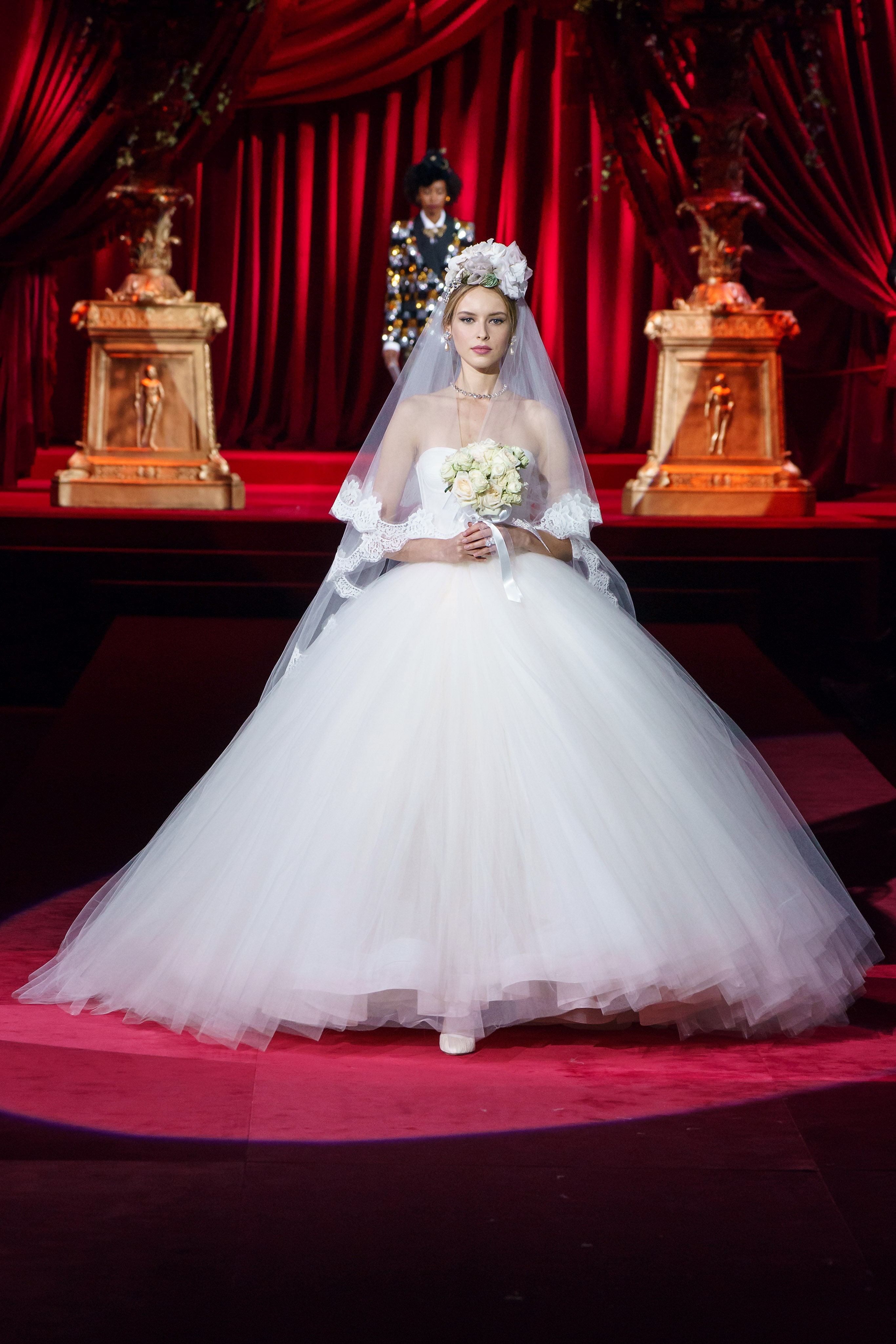 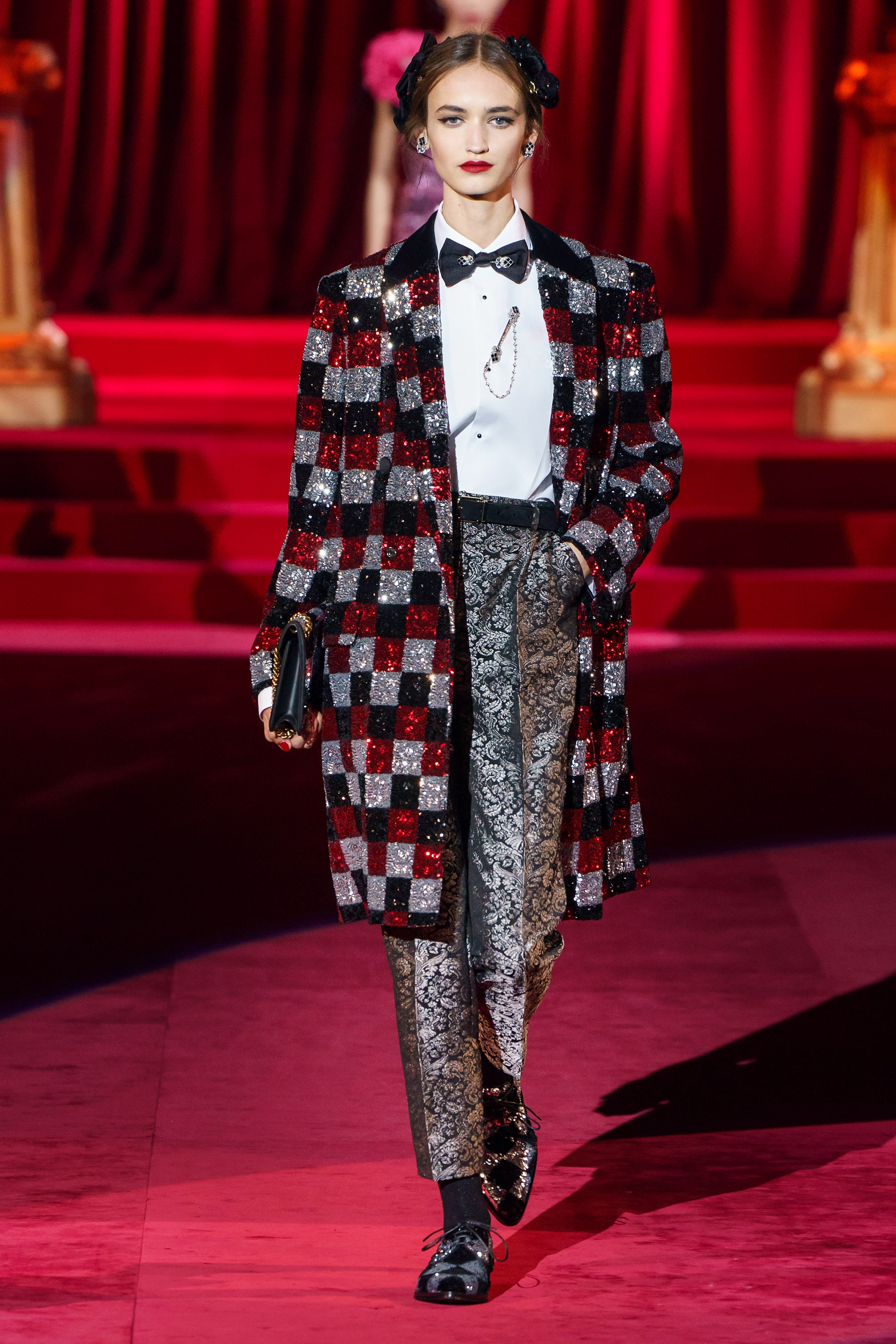 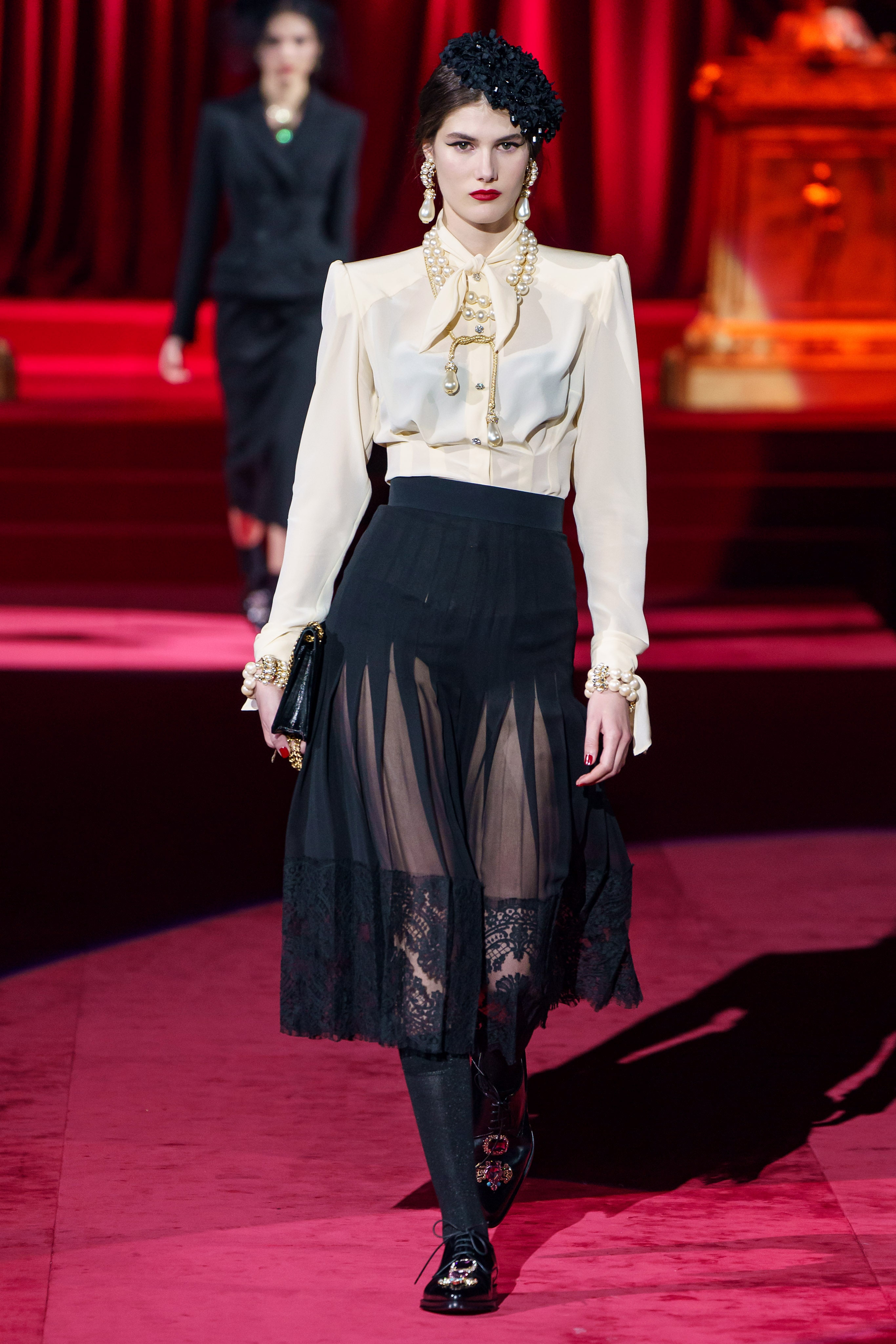 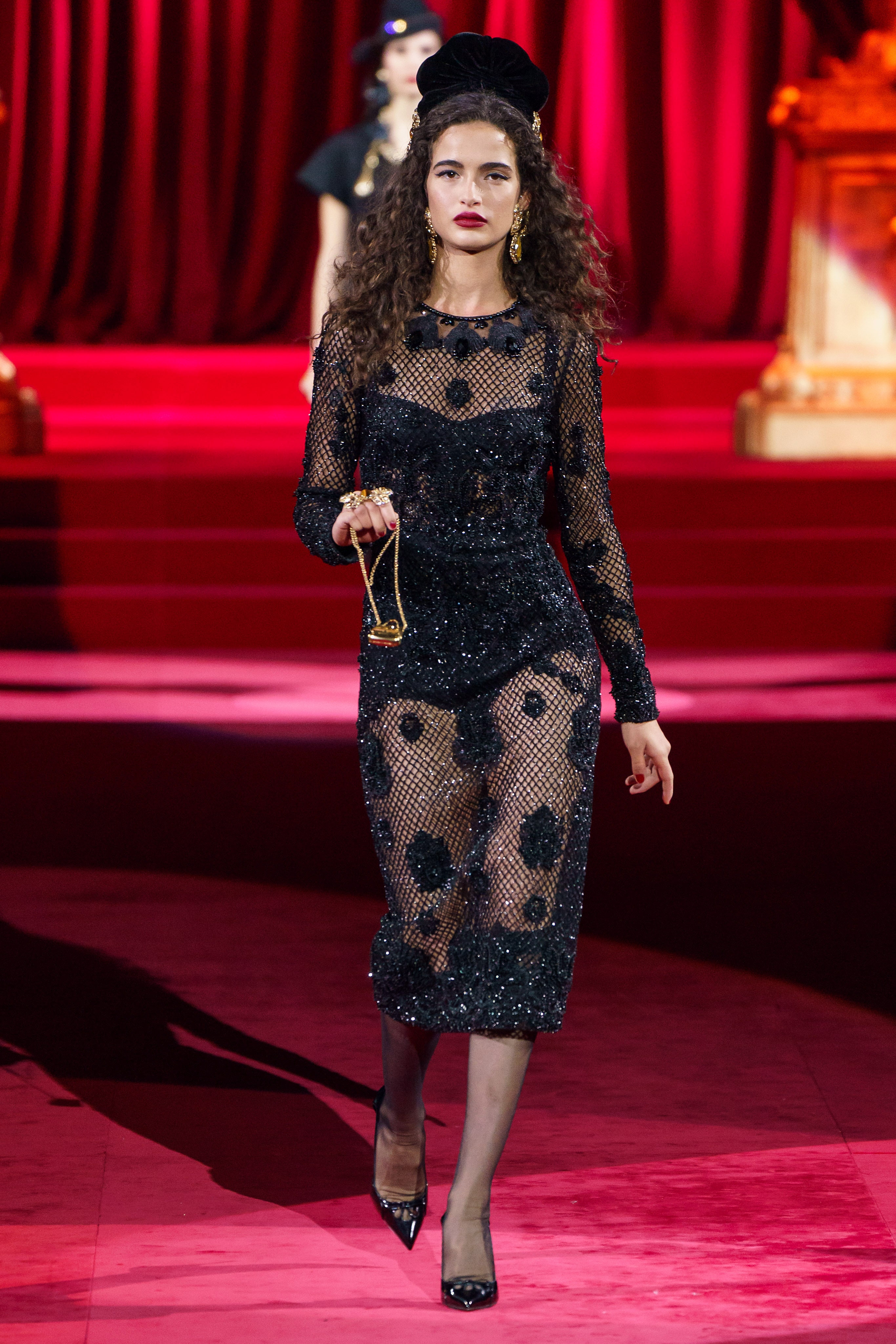 I have to admit that for all the incredible loveliness contained in this collection, by the time we got to the final looks my eyes were a bit fatigued. One has to remember that the whole salon approach to showing was designed for couture collections that rarely numbered more than 20 pieces. To walk 127 individual ensembles one at a time had even the most stalwart fans shifting in their seats by the end. Getting lost in this collection is a little too easy.

Like several other labels we’ve seen this season, starting with Ralph Lauren all the way back at the start of New York’s week, the emphasis is on quality. A video before the show had the label’s seamstresses sitting around a table hand-stitching details into dresses. Not only has this season been a push back against streetwear, but also the shoddily-made clothing of fast fashion. One doesn’t do hand stitching like this and make a new retail “drop” every week.

To some degree, this is a retreat to a safe space for Dolce & Gabbana and after some of the controversies, they’ve had over the past year that’s probably not a bad idea. They need a collection, maybe two, that remind people of what their core values and aesthetics are. How long they need to stay in this mode probably depends on public sentiment as much as anything. That and Dominic staying off social media. Elegance is nice, but can it last forever? We’ll see.