I need you to do me a favor. You’ll need 15 minutes after reading this review. I want you to watch the recording of this morning’s show. I wouldn’t normally ask such a thing, but there is absolutely no way to fully communicate with words alone what happened on that runway this morning. It was hilarious. It was frightening. It was one of the most unusual runway presentations I have ever experienced. The only way to explain the events is for you to view the recording for yourself.

By way of background, I can tell you that Marras’ primary inspiration for this season was 19th-20th century botanist Eva Mameli, an Italian-born scientist who went to work at Botany Department of the Agricultural Experiment Station (Estaciòn Experimental Agronòmica) in Santiago de las Vegas, Cuba. She also just happens to be the mother of one of Italy’s most famous writers, Italo Calvino. So, as one might expect, there are all kinds of floral prints and embroideries and embellishments throughout the collection.

Marras takes all those assorted fabrics and prints and textures and tosses them together in a style that at times feels as though he just threw fabric against a sticky board went with whatever stuck. Be sure, there is a rhyme and reason to his apparent madness. The contrast of colors and fabrics is carefully matched to blend in precise patterns. There are no accidents here. His silhouettes are unique and sometimes a bit challenging to figure out, but well worth the consideration.

In addition to the influence of Ms. Mameli, however, the runway presentation itself was inspired by the choreography of Pina Bausch. She created a unique style of dance known as Tanztheater. While the style isn’t uncommon across Europe, especially in Germany, it’s rare that we see a performance of the style here in the US. In fact, I can only think of one instance in New York where I’ve seen it done here at all. So, when members of the runway cast, which included Christina Morozzi and Benedetta Barzini (who walked for Simone Rocha as well) as well as other mature actors and Tanztheater performers took to the runway they did not do a normal walk. Instead, they engaged in things such as dramatic gestures, tangos, pas de deux and specific choreography that insinuated a story without actually telling such. When one is not accustomed to such theatrics the actions seem quite bizarre and unusual.

And then, there were the models carrying potted plants. That actually made sense, though, given the botanical inspiration.

I’m not done, but let’s actually talk about clothes for a moment, shall we?

Both men’s and women’s fashion walked as part of this show, but there is a fair amount of androgyny going on throughout the collection. For example, a young man comes through making a striking appearance in the coat below. Then, just a few models later, we see it as pictured, paired with a dress on a young woman. That type of back-and-forth happened regularly and at no time did the pieces look dramatically out of place with either gender. 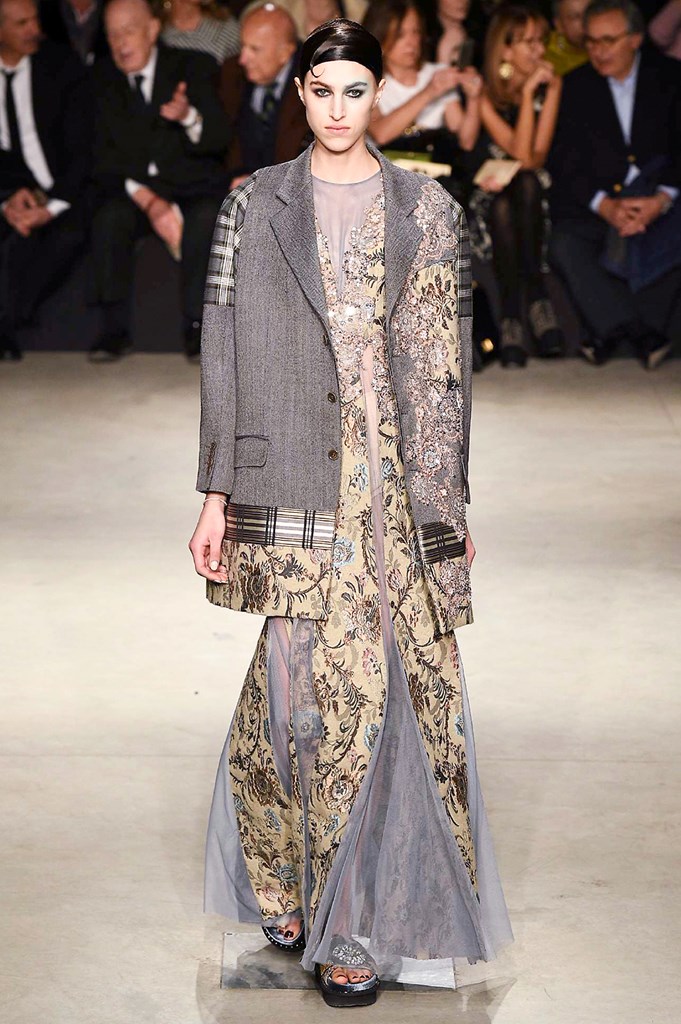 There are a load of very fun and colorful sweaters in this collection as well. Marras really seems to like sweaters. He just doesn’t like all of them looking the same way all the time. So, he does things like creating optical illusions that challenge how we view clothes. I’ve never known anyone who actually bought one of these sweaters, though. If I did, I’d want to follow them around town for a day just to capture the expression on people’s faces as they pass. You have to admit, it’s a look that will get you noticed. 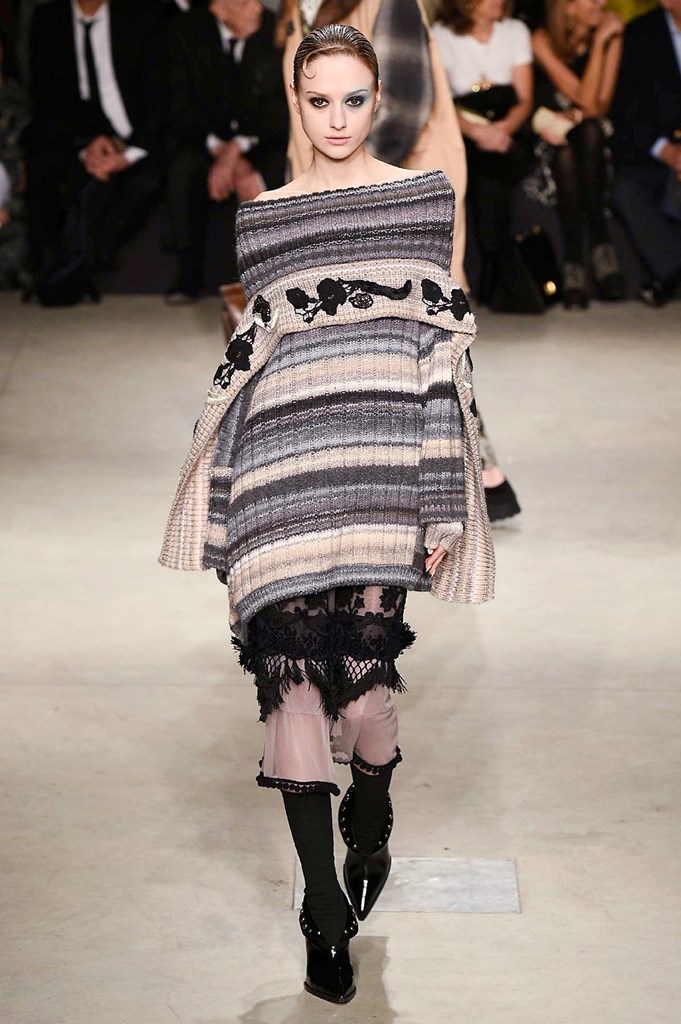 The dramatics of the runway presentation were so unique that, while wonderful to watch, might have taken away the impact of some of the clothes, especially the more mainstream dresses. Pieces like the one below are not uncommon in this collection, the floral print being the primary focus on a dress so simple in design that it is stunning. 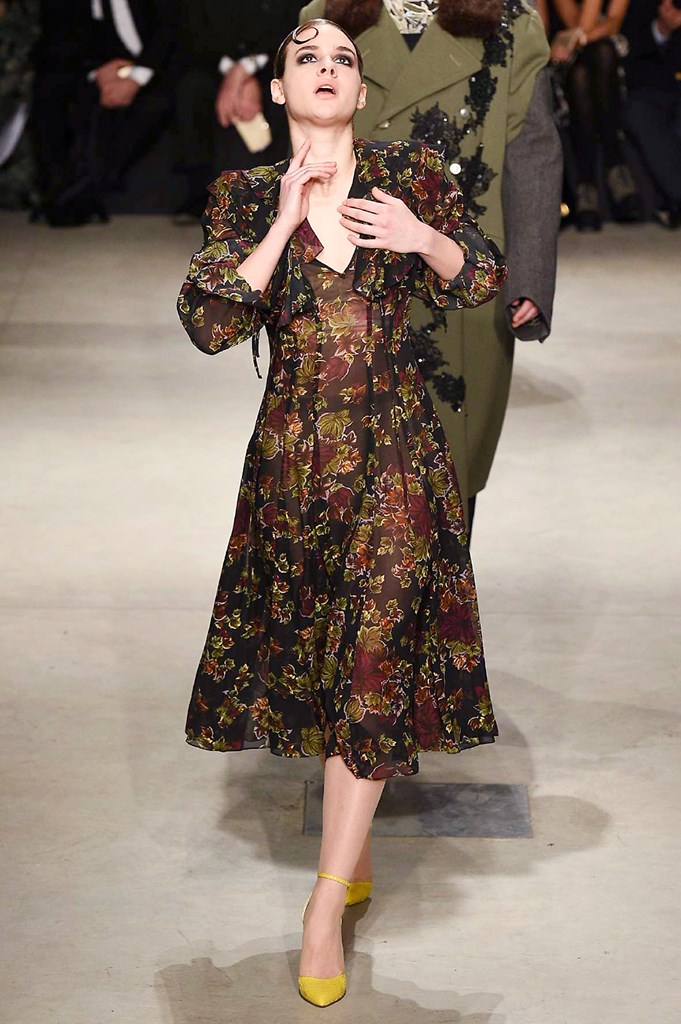 As frightening as it is to say, it looks as though mustard yellow is the breakout color for Milan this season. We’ve seen it in everything from shoes to parkas to hair extensions. The number of times designers have felt it necessary to create a head-to-toe ensemble worries me. While the silhouette and style are lovely, this is one of those colors that is best left as an accent, not a primary participant. 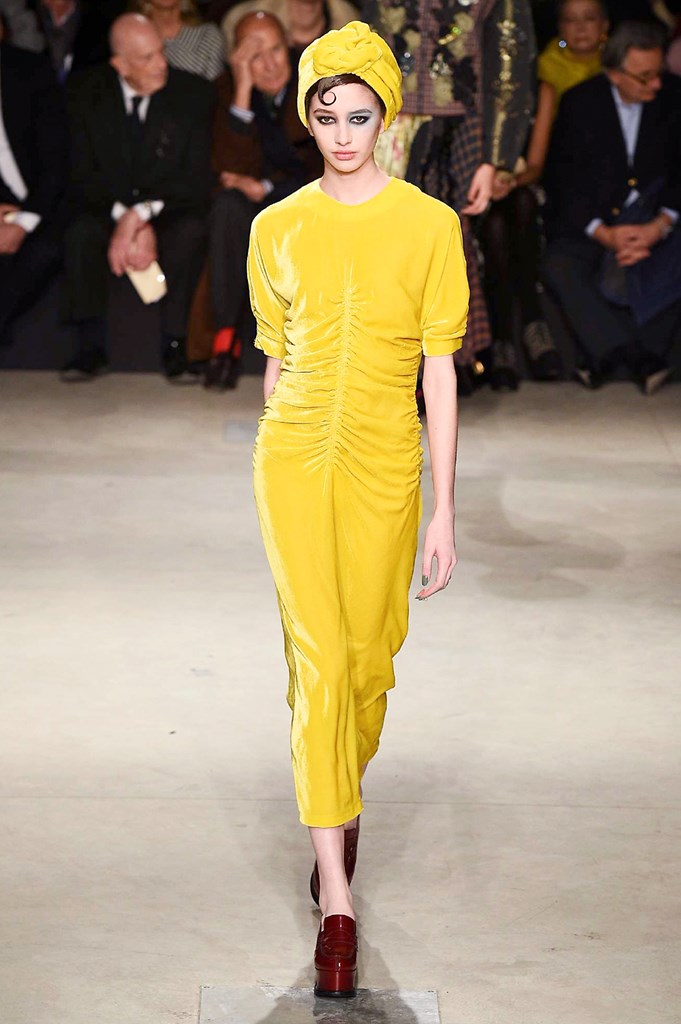 Super long sleeves seem to be a thing for sweaters or anything that might be mistaken for a sweater. This artistic print, with Eva’s face in the background, is unique and lovely on its own but allowing the sleeves to come down just below the hem of the sweater makes the aesthetic more complete. 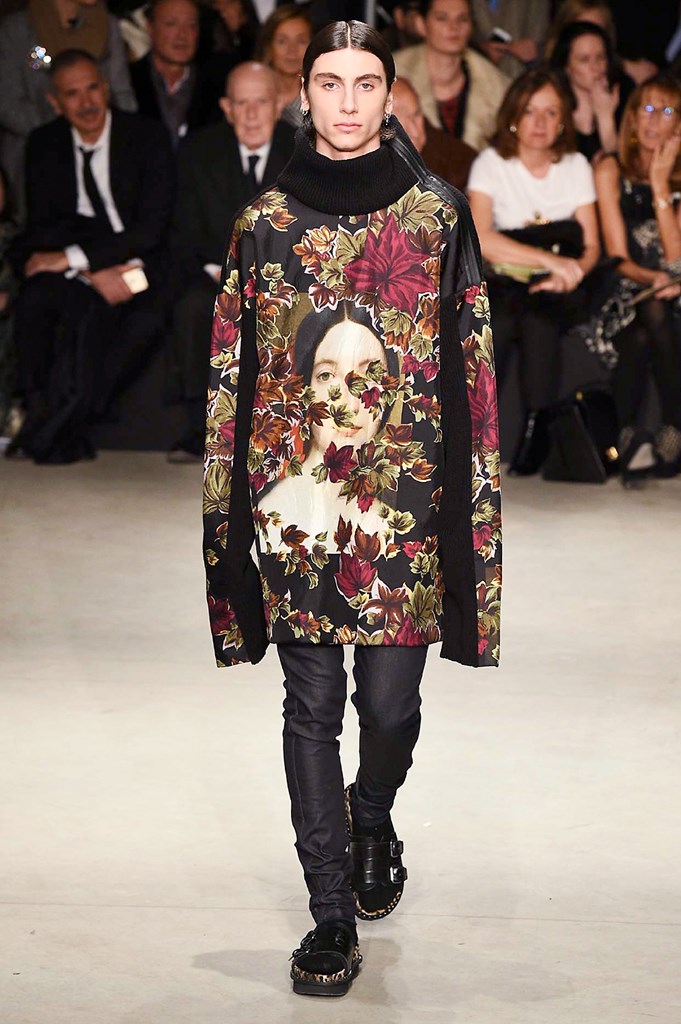 Ensembles in this collection don’t follow a normal grouping, so a gown such as the plant-carrying piece below, comes with a vest and skirt ensemble before it and a bulky men’s coat afterward. Yet, given Marras’ way of assembling fabrics, the mashed up nature of the show seems to make sense following a similar format. 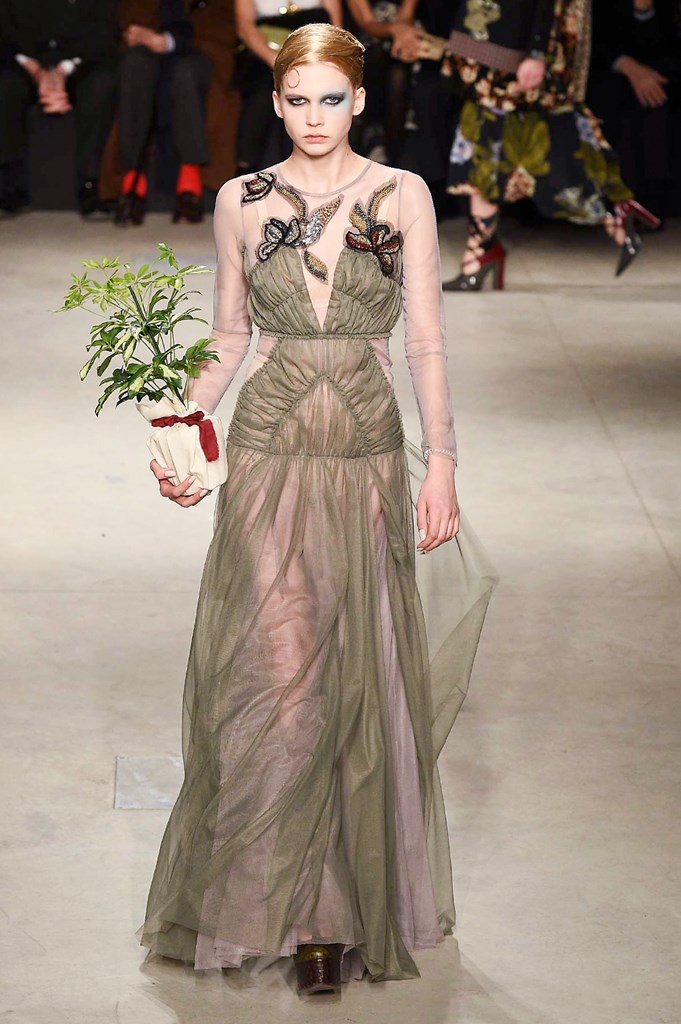 Nothing about this show is normal and in addition to all the in-walk theatrics, the finale was a choreographed dance all its own. Even the “normal” models were allowed to participate in this jaunty little exercise, though the more choreographed pieces were left to the actors in the group. The jaunty tuba-backed oom-pa gave the walk a lovely sense of humor that seemed to put a polite finish on the whole thing.

Then, when Antonio came out to take his bow, this happened. That would be Marras out in front, being chased around the runway by his entire cast.

Even the dog got in on the act.

Now, I still had two more shows after this one. I can assure you that, as lovely as they were, neither came anywhere close to being as exciting. Something tells me nothing else ever will.

Here’s the video. Be sure to make it full screen on whatever device you’re using. It starts normally enough. The first instance happens so quickly you may think it a fluke. No, nothing here is a fluke.