Can veils be coming back as a fashion trend? While they keep popping up on runways almost every season, we’ve not seen them in popular streetwear since the early 1960s. This season, though, they seem to be making a comeback, begging the question whether young women are willing to cover their faces in any manner without there being a religiously-dominated reason behind it? Unlike the veils of my mother’s young adulthood, which were primarily very loose netting, veils such as those seen in Simone Rocha’s spring/summer collection are heavier, often embroidered tulle. Whereas veils of the 60s rarely came past the wearer’s nose, these cover the entire head. Seeing them on one runway is no big deal. Seeing them on several runways, as has been the case this season, looks like a trend that could actually bleed over to what women wear in public.

There also seems to be some pre-occupation among some designers with the topic of death. While Rocha did not stage her collection in a cemetery as a couple of others have done this season, she did have a very strong reference to the Chinese celebration of Quing Ming, which is similar to the Day of the Dead celebration in some Latin cultures. Simone’s famous father, designer John Rocha, has extended family in Hong Kong, which Simone visited earlier this year. While much of the collection reflects different aspects of that culture and its history, it is the paper-like taffeta raincoat that stands out, reminiscent of the paper suits Buddhist families take to the graves of their ancestors.

We’re accustomed to Rocha’s more Irish influenced collections so this season’s departure from that norm was exciting even to the point of feeling overwhelming. While shopping in an antique marketing in Hong Kong, Simone came across some 16th-century paintings of concubines from China’s Tang dynasty (618-907). Elements from those paints show up in everything from the wide-brimmed hats from which those veils hung, to floral tapestries, to dresses composed of spheres, to printed patterns and portraits.

There is a tremendous amount of lace and tulle used in this collection. There are also bibs, which never fail to strike me as humorous, either starched white or black and covered with jewels. Silhouettes are, as always, very full. Simone doesn’t want a woman to worry about whether she’s still going to fit into her clothes because she had an extra helping of pasta at dinner the night before. That some of the dresses seem rather tent-like is the result of those spheres, though, and more a byproduct of the way fabric naturally falls. 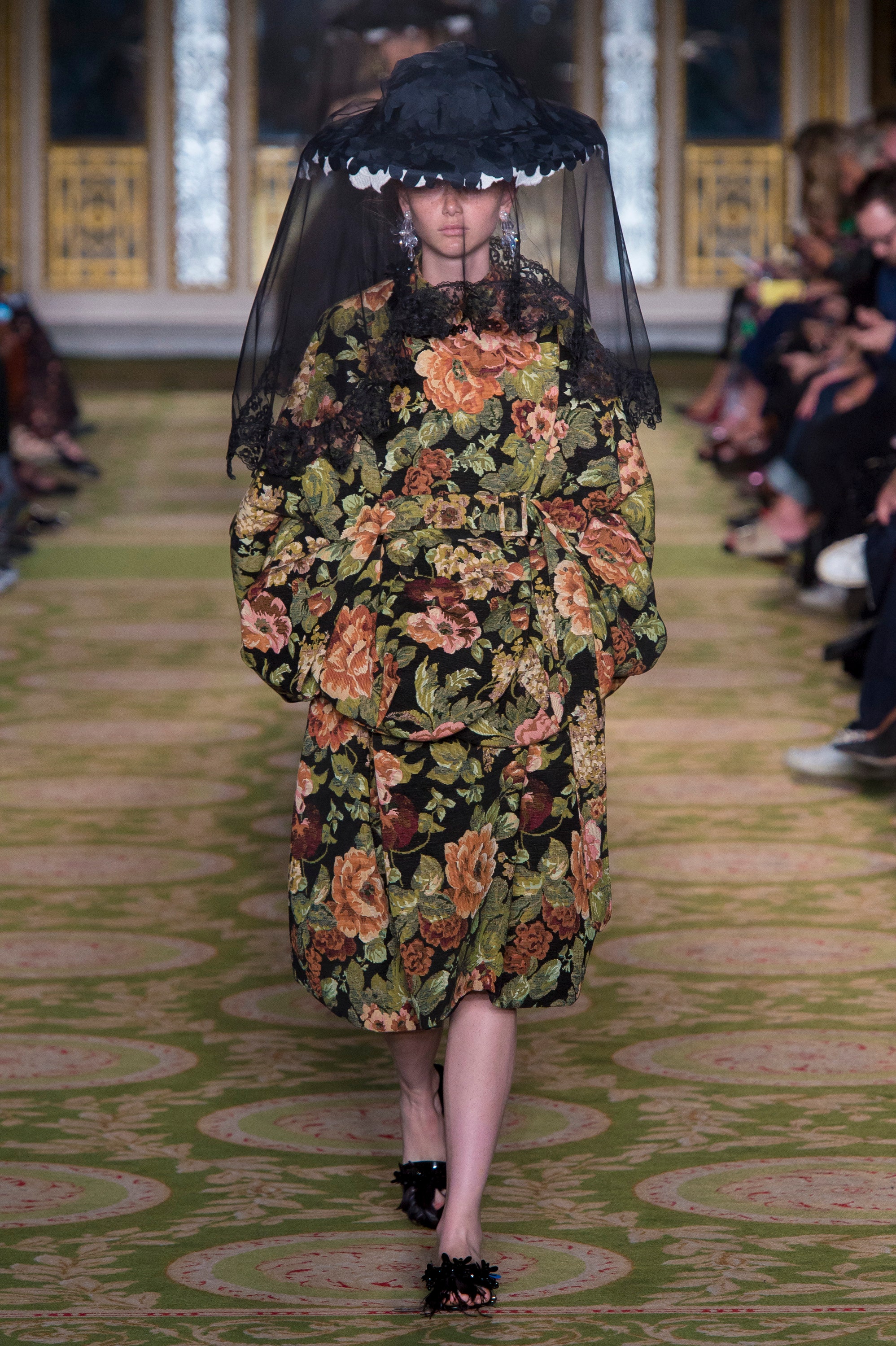 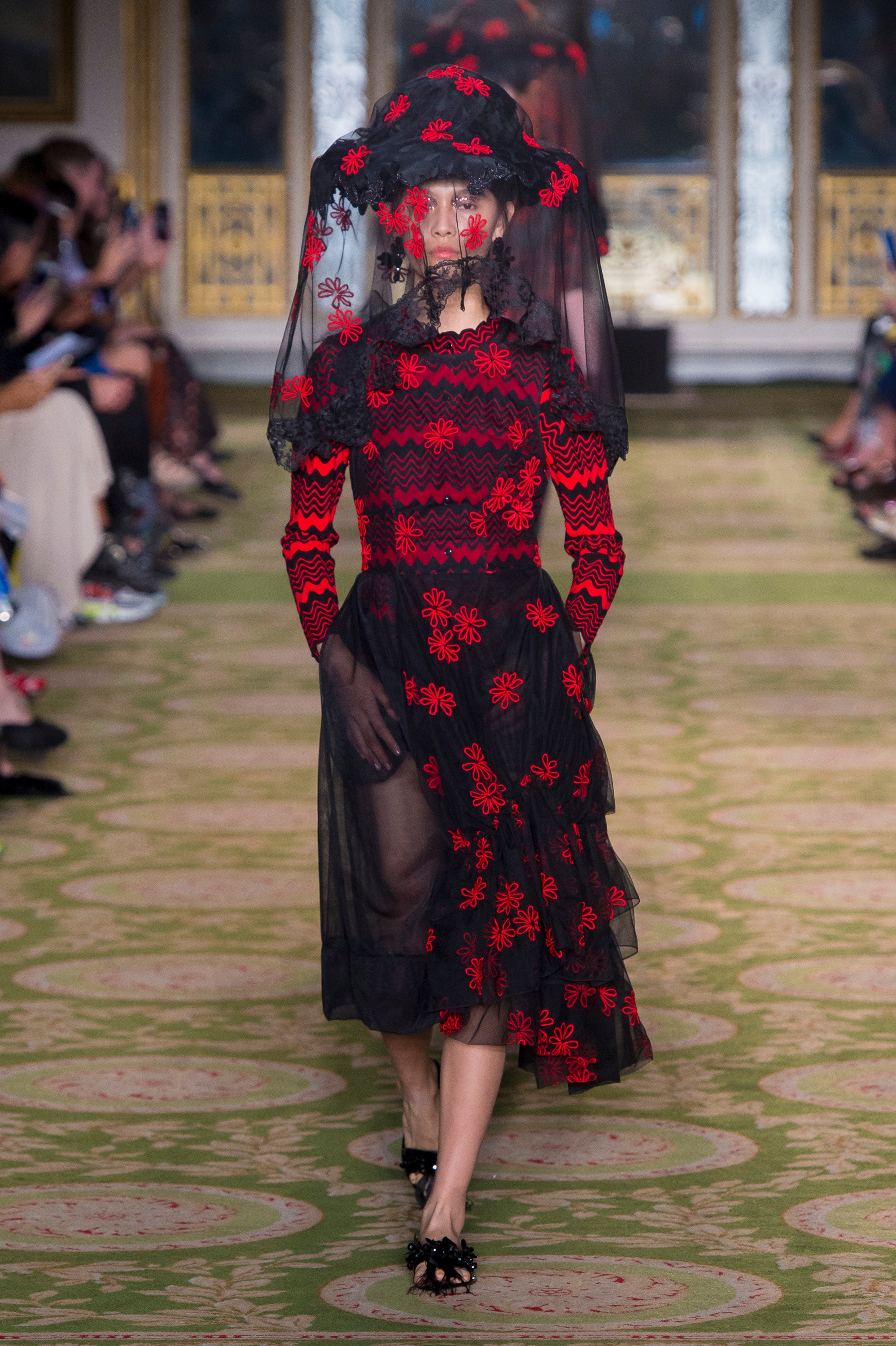 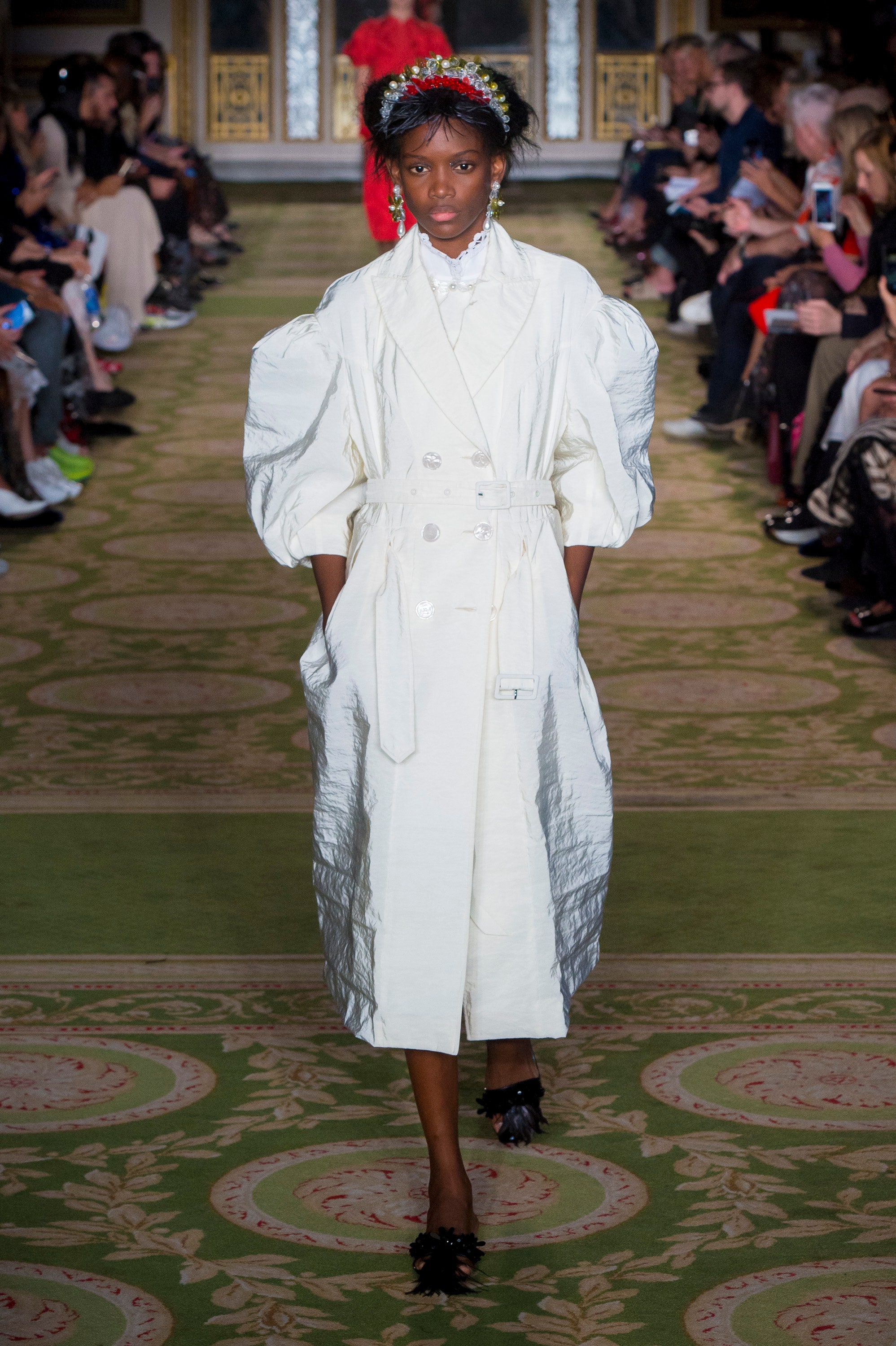 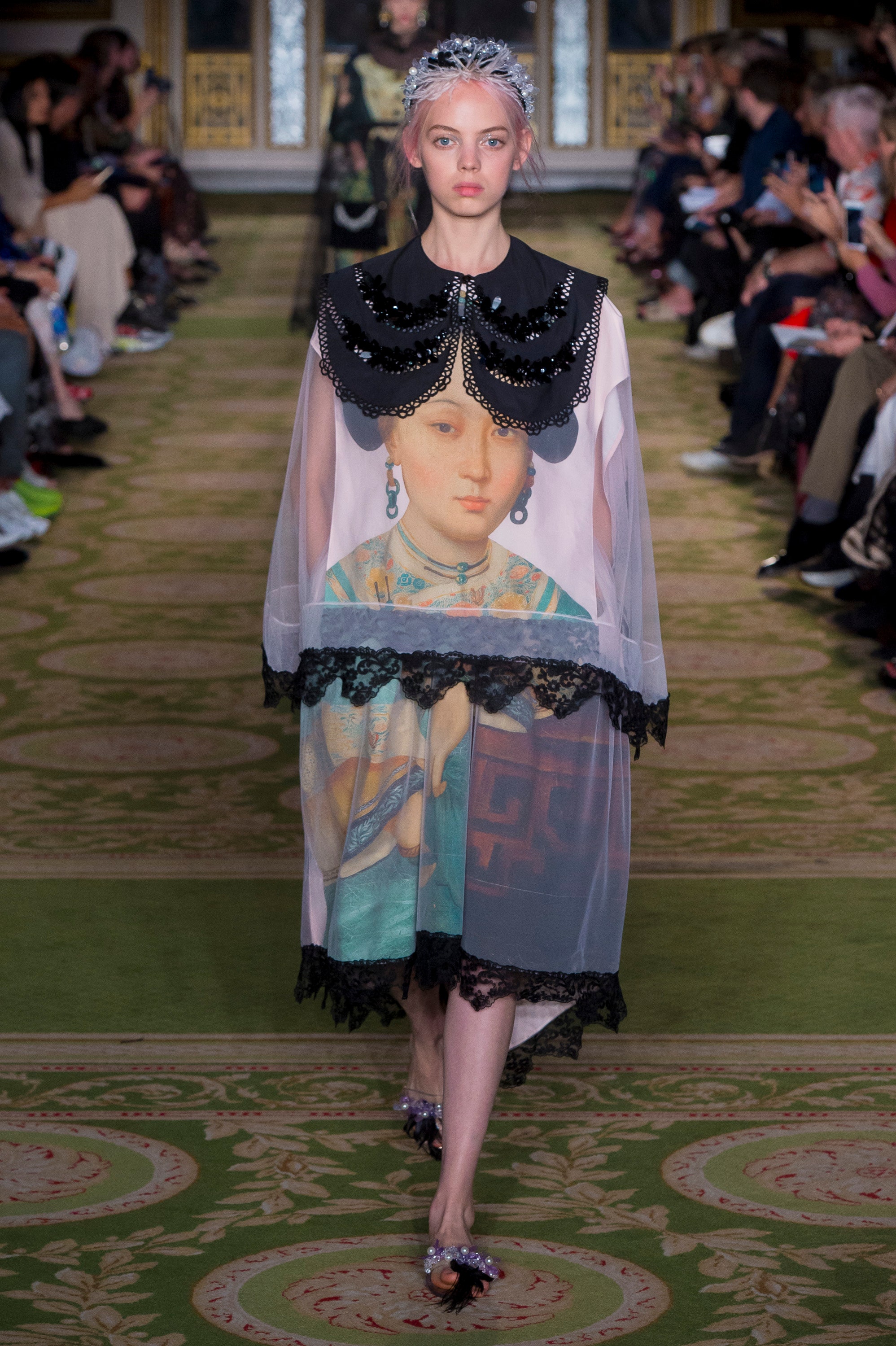 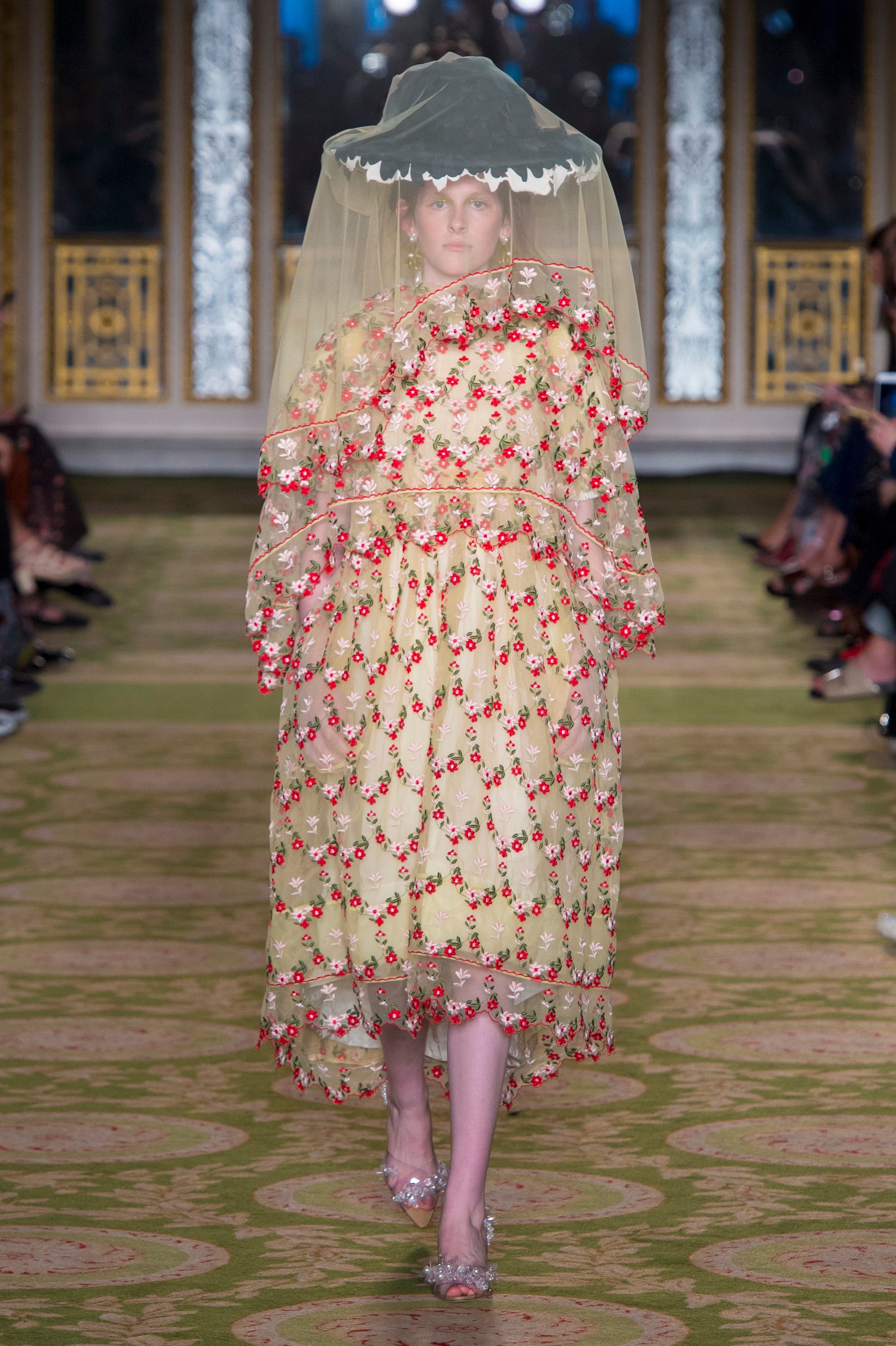 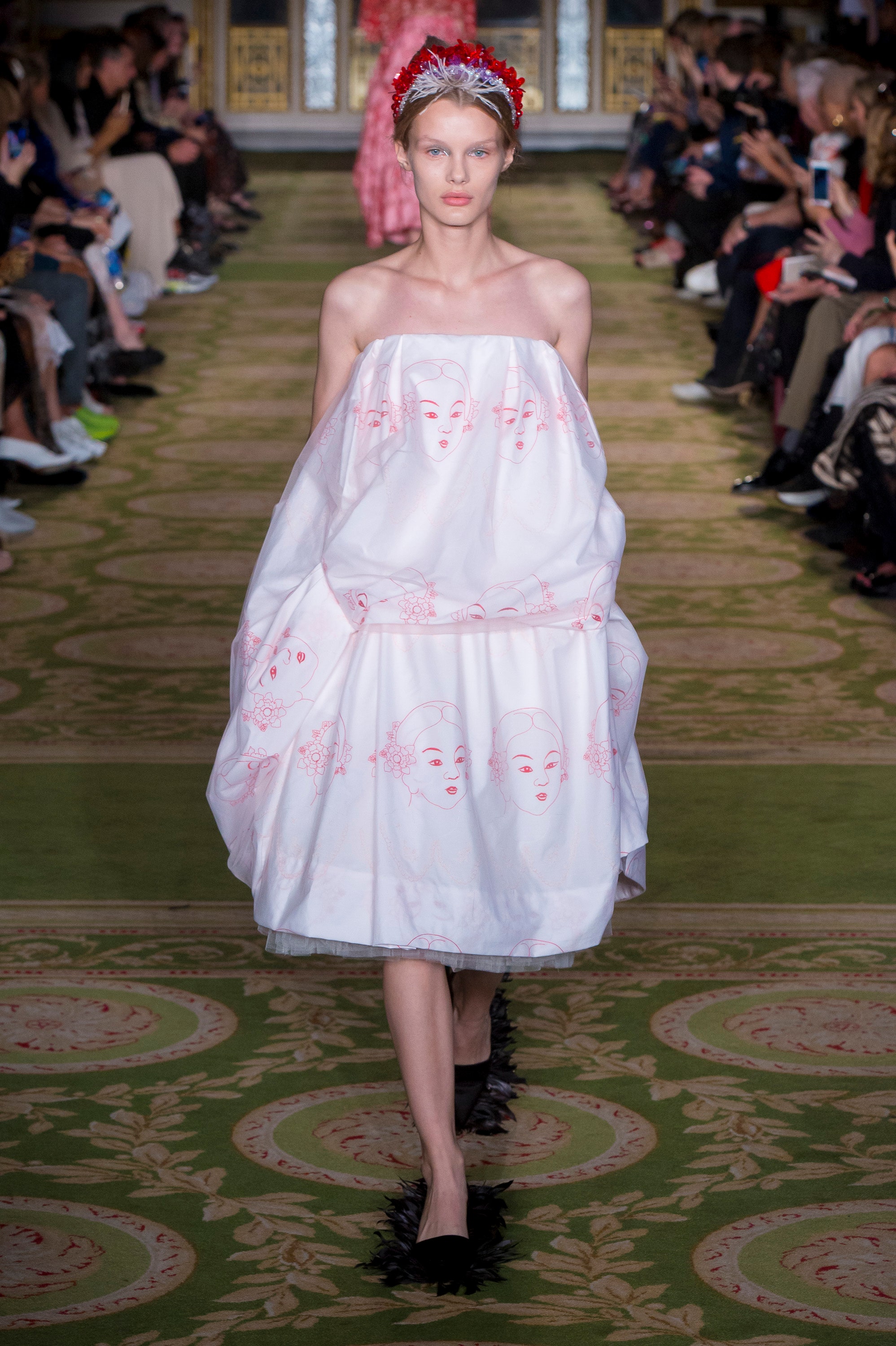 One will want to take note of the incredible amount of handwork in these pieces. All the embroideries, especially the hand-drawn faces on white silk, thousands of hours of needlework. This is very delicate work for very delicate clothing.  Even with everything going on, Rocha manages to keep overall weights down to appropriate levels for a Spring collection.

The only thing here that still cause my eyes to roll are the feathered shoes. Granted, this is strictly a personal opinion, but they look too much like someone slipped dust mops on their feet for me to take the footwear, or the person wearing them, seriously. This silly notion has been around for enough seasons I think we can write it off and move on.

Simone Rocha has definitely created another interesting if not entertaining collection. She says her team had fun creating it and that shows through the overall spirit of the collection. Hopefully, her customers will have just as much fun wearing it.