Switching from New York to London is never easy. The time difference alone is maddening, especially considering the “week” here only lasts five days. One’s body barely has time to begin adjusting before it’s over and we’re on to yet another time zone in Milan. The weather was nice enough, just a touch cooler than what the Midwest is experiencing. But then, there’s the uniquely British way of doing everything, such as crowding everyone into the British Fashion Council show space which seems even tighter this year than it did last season.

We got up early to catch the first couple of shows just to get acclimated to the change and were worried for a while that looks here might be a bit too much for Midwestern US palettes, but fortunately, Bora Aksu saved the morning with a beautiful collection full of lace and checks and starched white linen. We get a touch of prep school uniform in a few of the looks, but as he goes through the collection the looks get softer, linen transitions to chiffon, and the black-checked grid gives way to layered mesh in light pastels that practically melt into the model’s skin. At the same time, the looks move from hints of nostalgia to a more futuristic tone and message.

The first thing one notices, though, with the very first look down the runway, is the hats. Again, the overall feel is very much that of a private prep school, but there’s something about these hats, whether it’s the mesh or the ribbon tied under the chin or the dark shadow it casts over the eyes, that takes away the sense of innocence and simplicity the look would have otherwise. 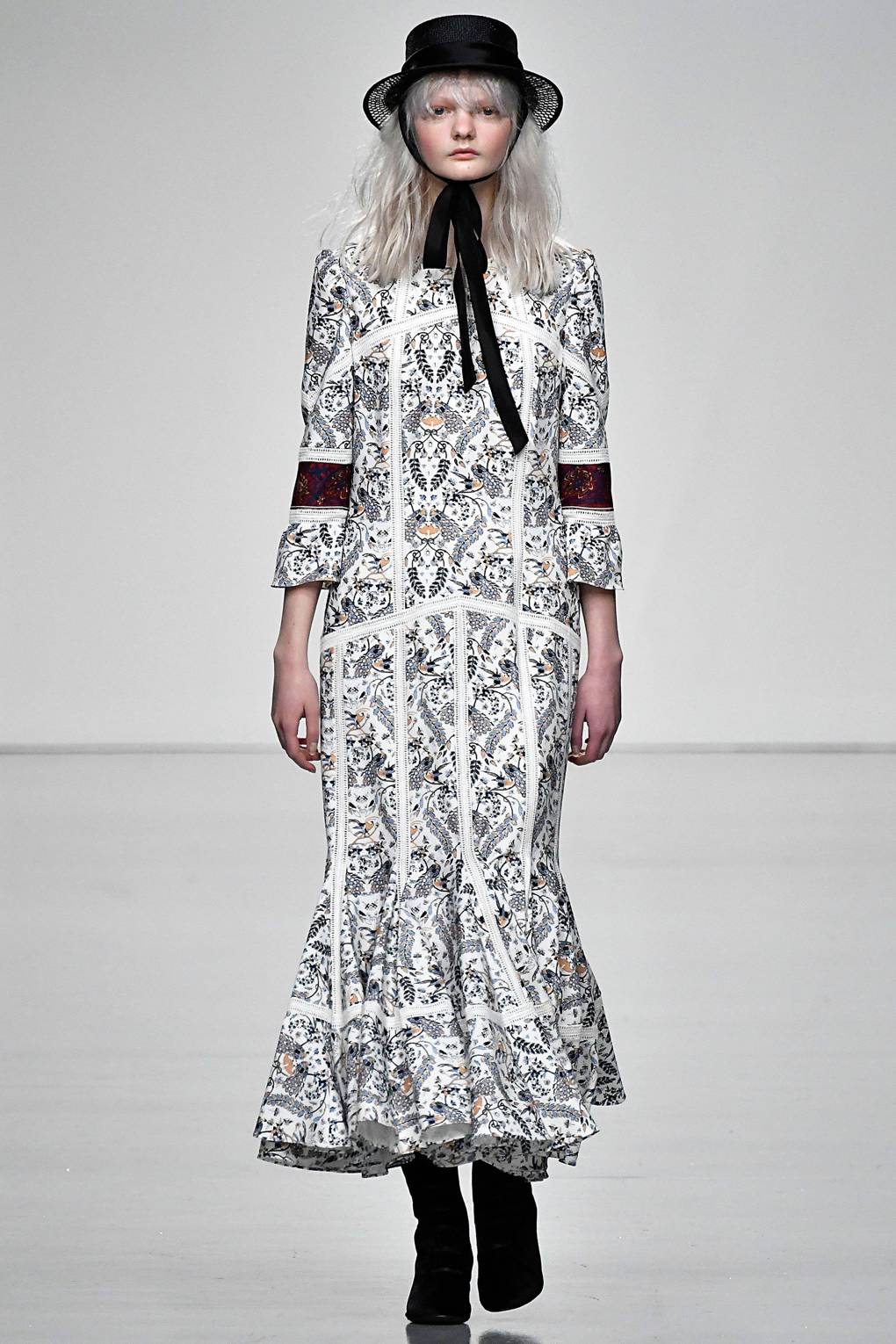 He doesn’t stay with the prints like this for very long, unfortunately. They really are quite nice and it might have been interesting to see what he could do with them. He does have a couple of looks in red, though, that really stand out in the collection. 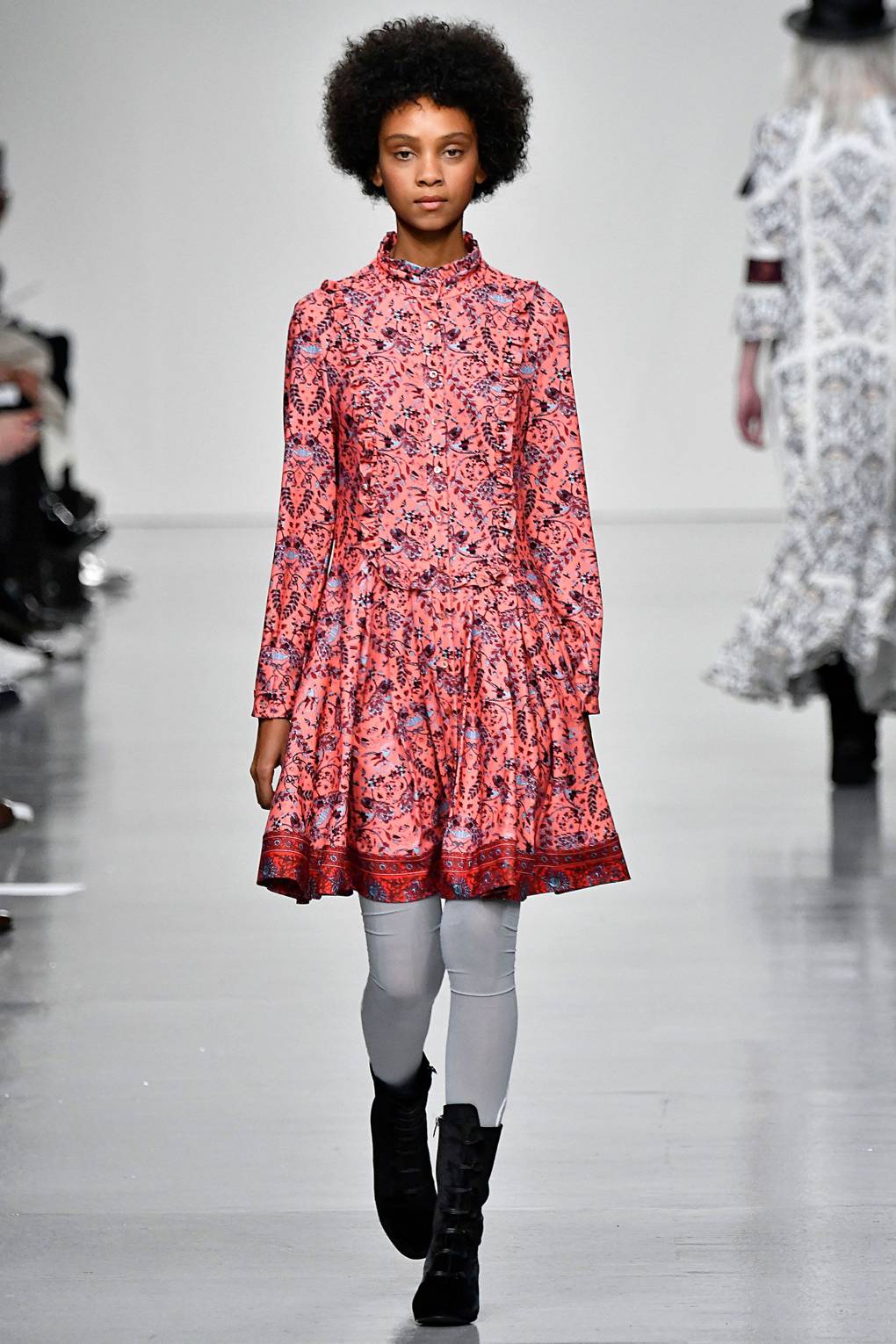 The risk here is that the combination of the prints and the silhouettes carry a bit of a juvenile aesthetic to them, especially given the white tights. The looks are lovely, to be sure, but the collection needed to move on and it did, right straight into multiple creative variations on a black and white grid.

A lot of things can be done with a simple grid. a small grid of gingham-sized blocks seems very simple and resolute. This piece seems especially contrite and fits in well with the New York trend of making sure that nearly every inch of skin is covered. 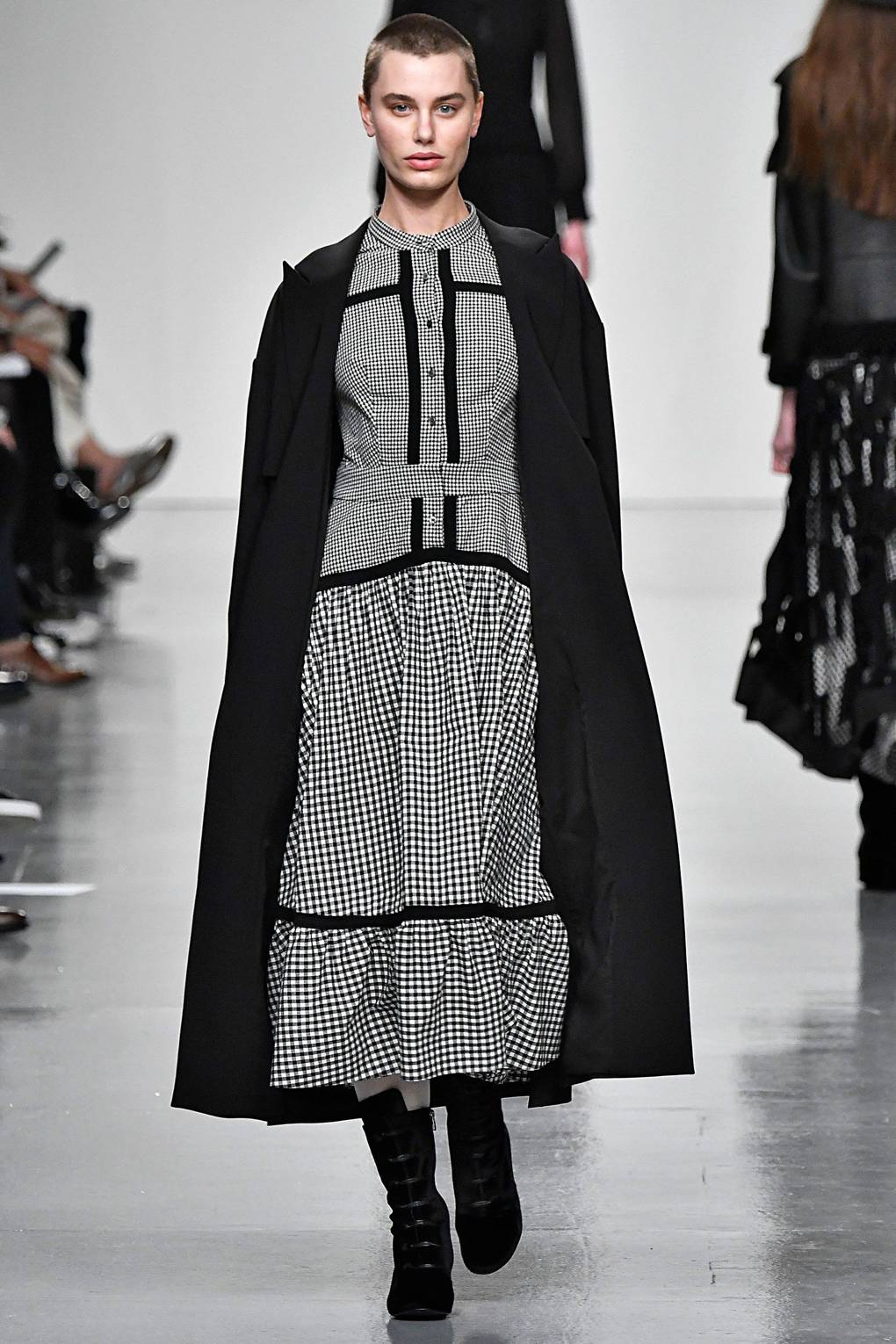 Then, he enlarges and twists the grid for a more abstract feel to the entire garment. Mind you, the grid lays over the white dress so there are dual sets of competing lines and shadows as one walks in this garment. The visual effect is rather breathtaking when one watches it carefully. 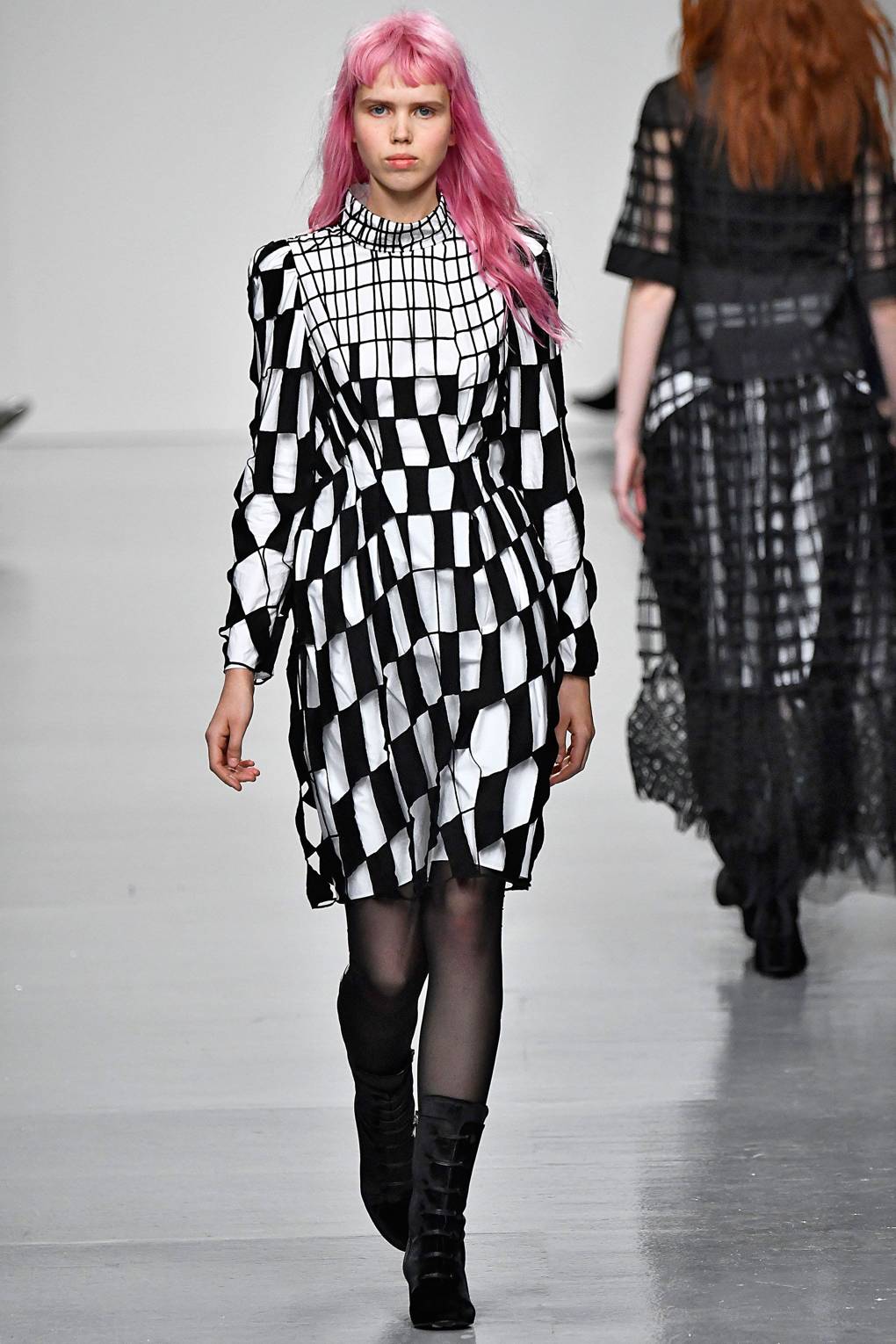 Yet, there are other times when the grid is more solid and looks more restrictive even though it’s not. As a result, the dresses take on a little more of a fetish feeling even when done as white on white in the dress below. 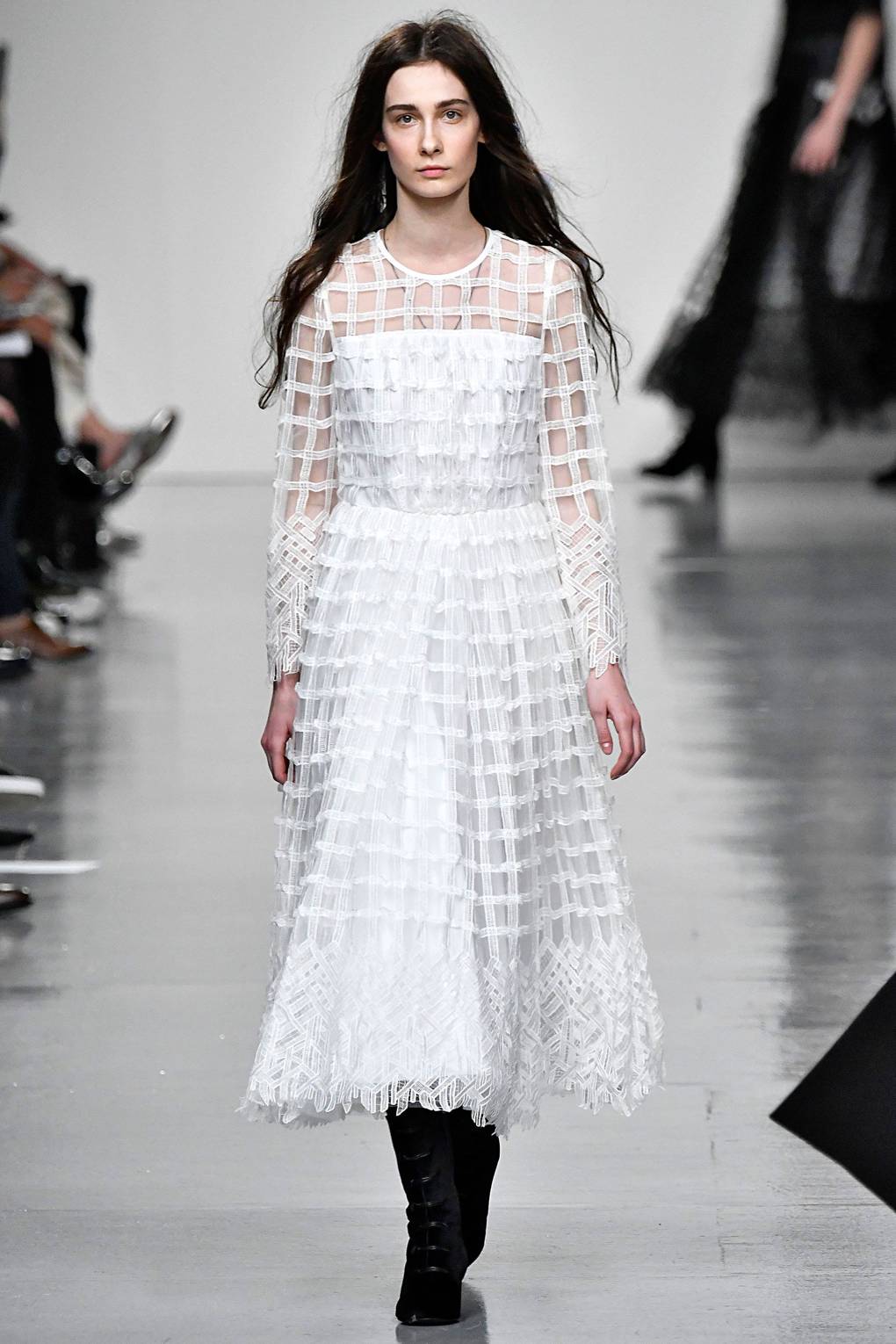 One must take care to notice that even when the grid looks harsh and unforgiving, Aksu is still working with delicate lace patterns throughout. Get up close with these garments and one sees an incredible amount of detail in the sewing and an intricate weaving to the patterns.

Moving on through the collection, the grid slowly transitions to a soft mesh. This piece in pastel pink and blue almost seemed to float as it came down the runway. 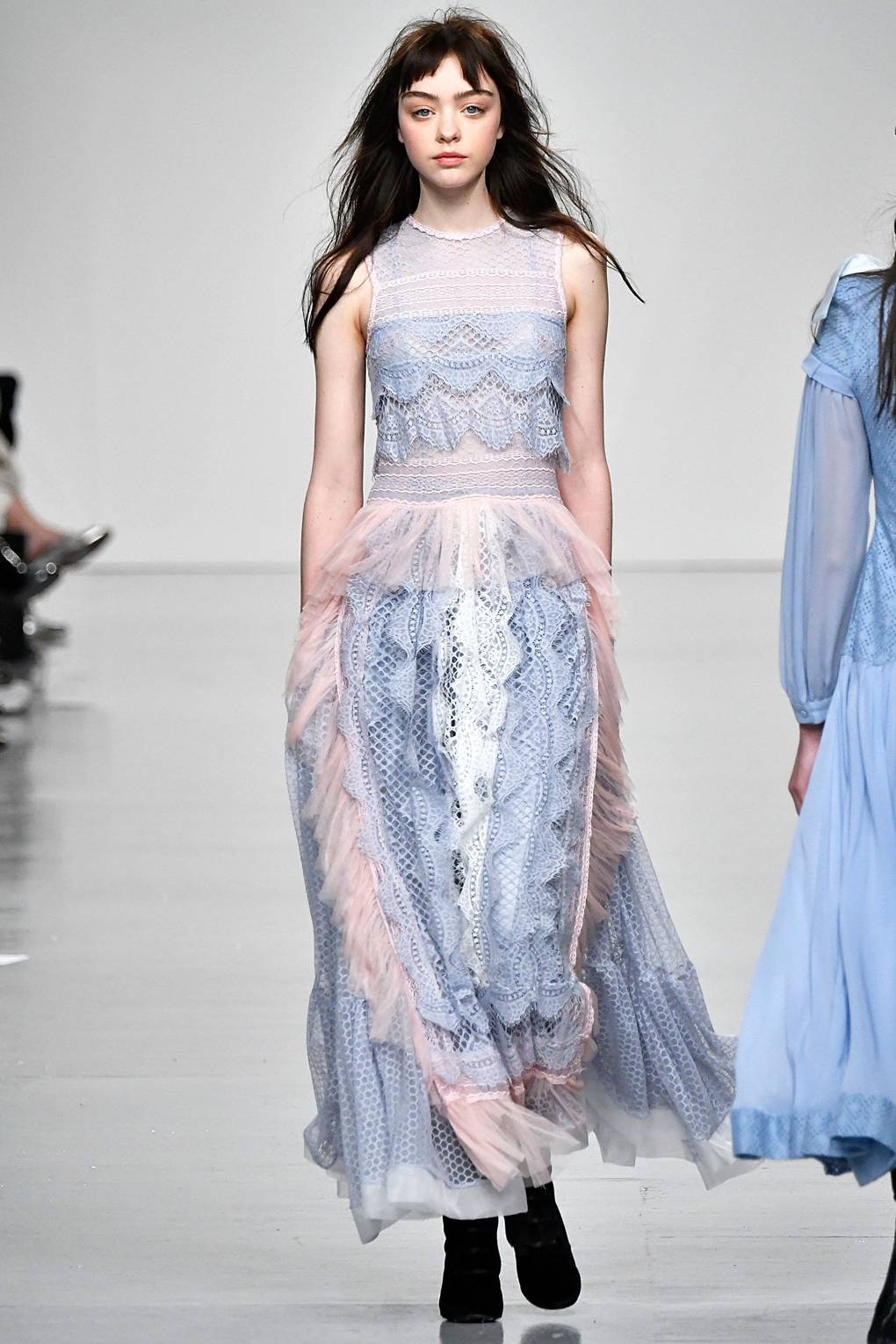 Looking closely, one sees the mesh in a honeycomb pattern surrounded by more traditional touches of lace and lined with pink tulle. The look is very traditional but the way Aksu uses the fabric is very contemporary and fresh. These looks even flirt with being just a tiny bit sheer and daring, though you’ll not see a slit skirt or low-plunging neckline in this collection at all.

Everything culminates in the final look he sends down the runway, a white dress with an oversized knit sweater that intimates a sense of quiet elegance and perhaps a guarded demeanor. This is the woman who enjoyed the dance but didn’t feel the need to stay until the clock struck midnight. She takes her sweater and sees herself to the door, not caring whether she’s missed. 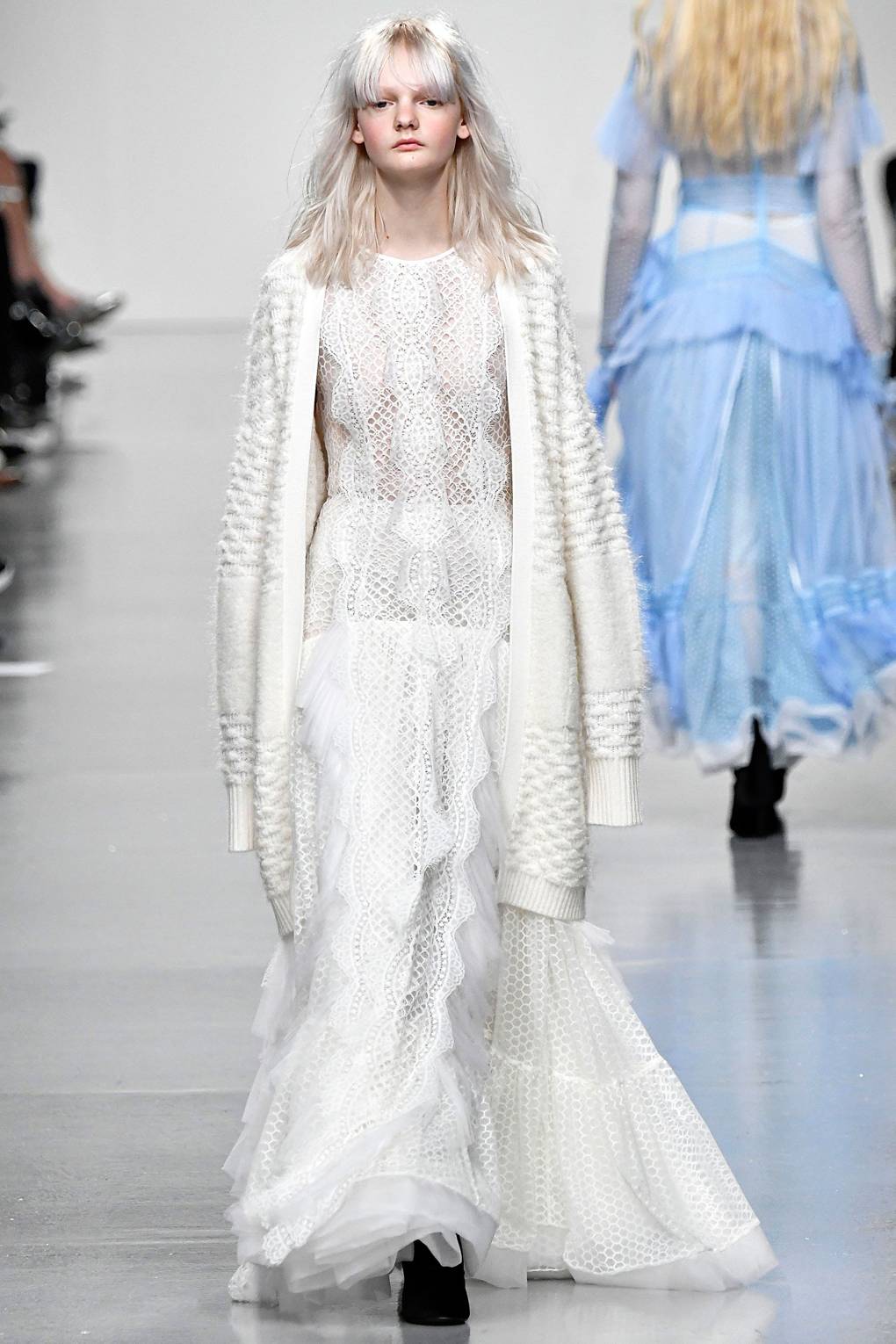 This is a beautiful collection and Aksu cycles through many creative variations on his themes. There is both innocence and caution throughout the collection, but at the same time a careful assurance that this woman, while careful, isn’t afraid. She knows where she’s going and is set on getting there by her own path.

I’m still sad that Aksu hasn’t pursued any US stocklists outside a couple of small boutiques. The collection could have a strong appeal in the Midwest as he doesn’t give in readily to strange and awkward trends but remains delightfully on point and current. Perhaps he just needs the right boutique to give him a chance.