Stepping through the doorway into Storage Space, a garage-turned-gallery located on the near northside, it’s easy to forget that it’s cold outside. Inside, the walls are saturated in steamy paintings of idyllic jungle scenes. In the center of the narrow room, an otherworldly fruit invites the viewer to touch. The creator of this foreign yet familiar world is Graham Marshall, a 27 year-old civil engineer. Born and raised near South Bend, IN, Graham is a graduate of Purdue University who now lives in Indianapolis. He has previously shown work in the Muncie Makes Lab, Tube Factory, and the Hamilton East Public Library. PATTERN had the opportunity to talk with Graham about his upcoming show, Under The Pink Moon, which opens January 24. 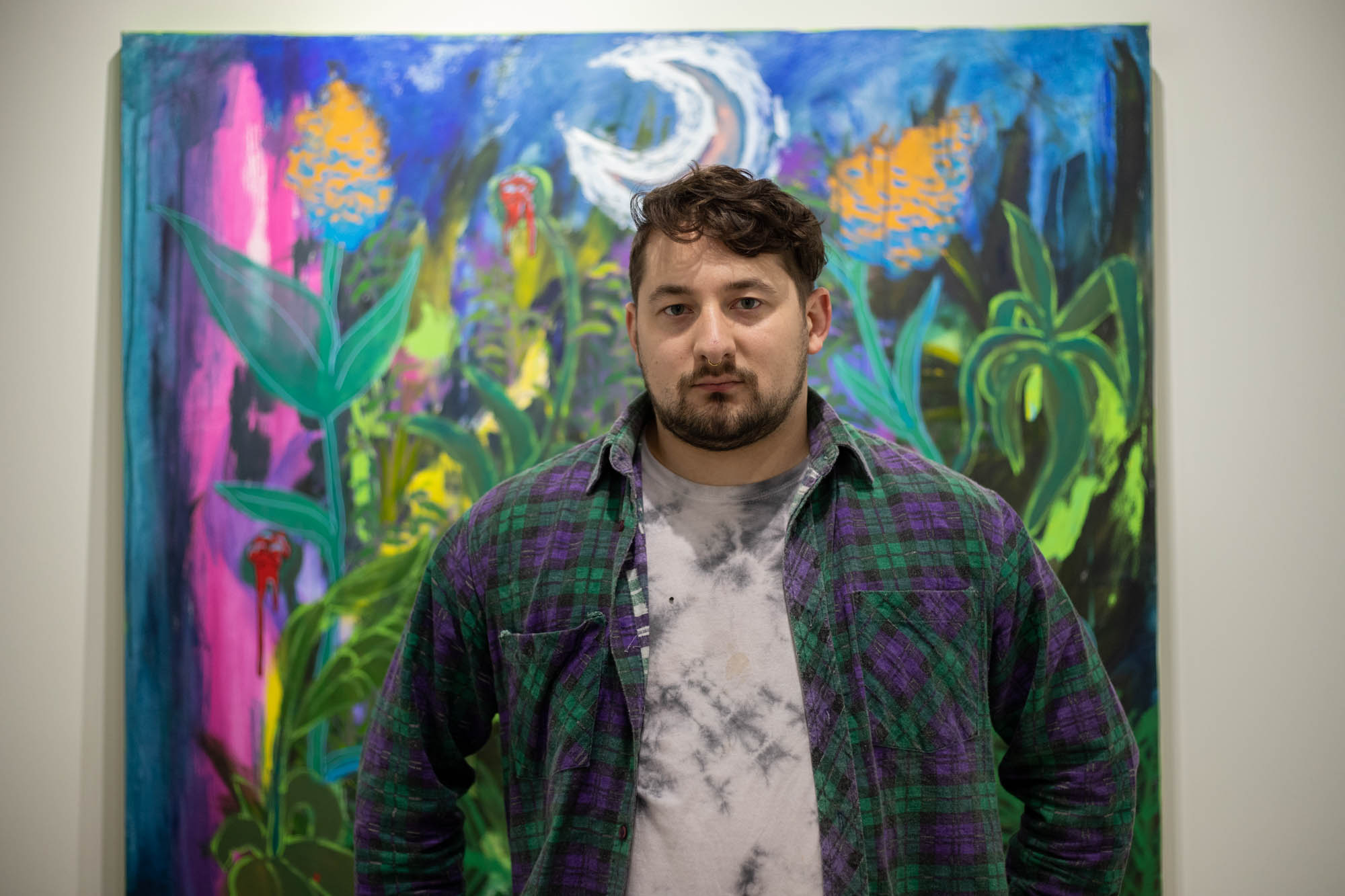 BF: What has been the hardest part about that, or even the greatest advantage?

GM: I think the greatest advantage is the outsider perspective I have. I’ve never taken an art class. I don’t know the lingo, and there hasn’t been a teacher or instructor telling me, “This is good art.” I’ve just kind of always been on my own, and within the past three or four years I made the conscious decision to actually do this.But sometimes it really sucks not having the connections that you get when you go to school for art. I really like the friends that I’ve made, and the community that I’ve built with that DIY feeling that I embody and really like to be a part of.

BF: Is this your first solo show?

GM: Yeah, this is my first solo show. It feels really cool. It’s been several years of this slow build, and it feels like finally there’s that fruition. All the work that I’ve been putting in is manifesting.  I’ve never had all of the stuff up and around and to see it all in one place, it’s like, “Oh wow, I did all of this.” I had one friend who really pushed me to do art and follow my passion. She was really instrumental in being the one artistic friend that I could bounce ideas off of and just talk about art with. 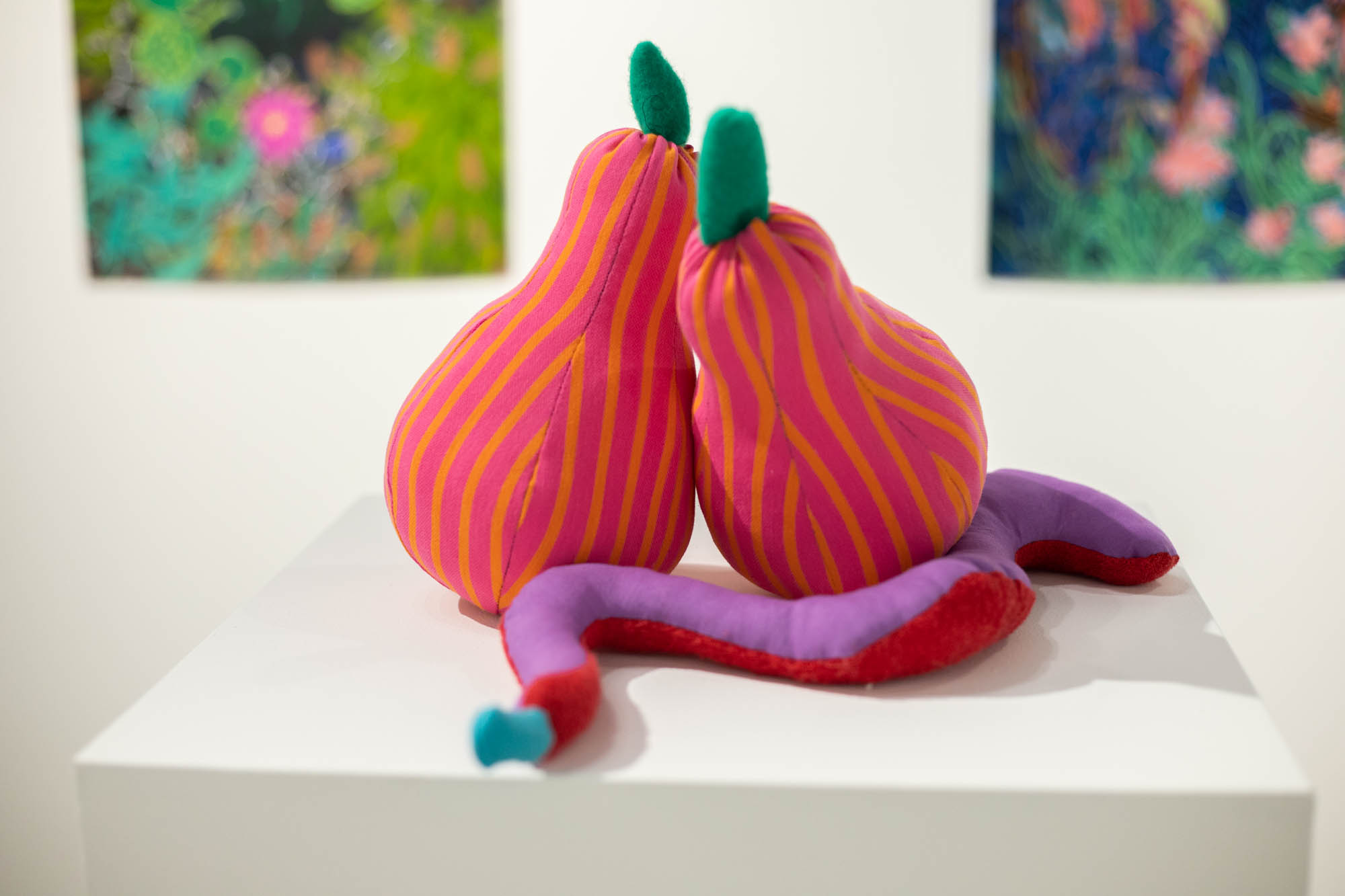 BF: The first show you were in was called Pink Punch, and this one is called Under The Pink Moon. Any connection?

GM: It’s just a coincidence, really. Pink Punch was a show my friend put on in Muncie, and it was themed around the color pink. One of the paintings that I had in that show is definitely a precursor to these ones. It’s very loose, and more abstract expressionist, but it’s like these with the crowded spaces and floral patterns, so that’s kind of the through-line if there is one. Under The Pink Moon actually is an amalgamation of things. I really like the song by Nick Drake, “Pink Moon”. I was listening to it when I was making that first painting, it was late summer…. I like dark spaces, and you can see that in a few of these. Late summer, lush greens, places where you’re surrounded by greenery, but you’re also surrounded by the darkness, that’s the kind of thing I really resonate with.

BF: Your show features a significant number of fiber artworks.

GM: I like to explore. That’s the other thing with not having a formal art education, a lot of my growth is just exploration of what I like to do. I’ve always liked making my own things, I’ve always known how to sew. I picked up some fabric at this reuse store and just started playing around. It makes an extension of what’s in the paintings in 3-D with these fabrics in a sculptural way that’s also comforting and inviting. With pillow stuff you just want to touch it, and I really like that. I really like working with fabric, and it’s something that’s easy to acquire and use and re-use. The stuffing in most of these is from pillows that I tore up. 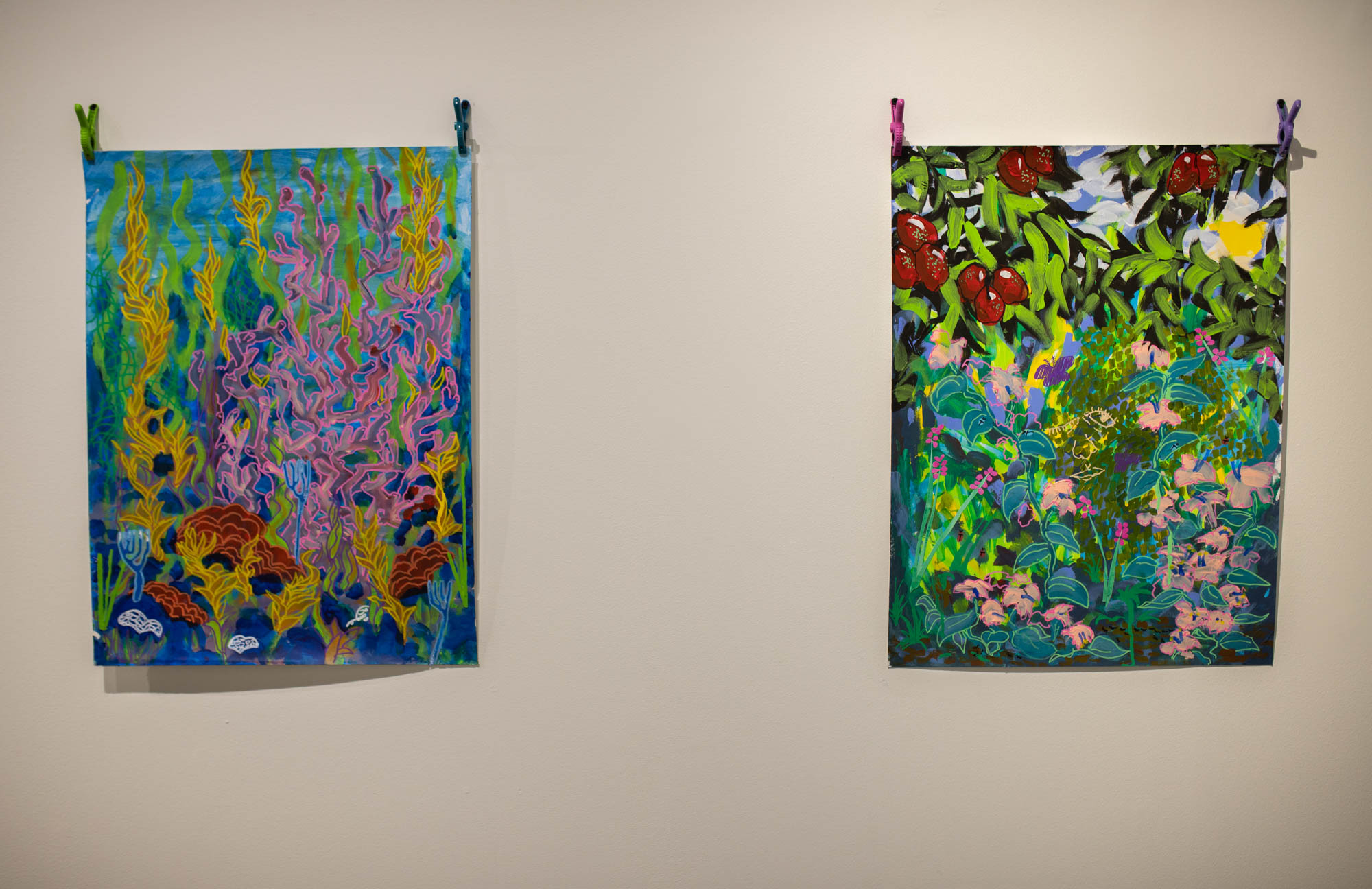 GM: Yeah, that’s my big thing, I just try to re-use as much as possible. If I’m not using something, it can be used for something else further down the line. I’m excited, I’m actually working on a shirt that I’m going to be wearing at the opening of the show. I’m not really a political person, it’s just kind of who I am, but I believe in re-use, and taking things out of the waste stream, and I really think that there’s a lot more usefulness in things than people give them credit for. I would rather use what I have than step out and buy something. And I try, sometimes to my detriment, to make what I have work before I step out and go spend money on something because I would rather spend my time making something than buying something. I believe that the resources that we have are limited, and we need to find better ways to use them, or we’re going to run out of them. Even renewable resources aren’t even renewable if you deplete them at such rapid rates. But it’s also that being cheap makes sense.

BF: Who would you say is your greatest artistic inspiration?

GM: That’s a tough one. For a while I was really into Joan Mitchell. I really like her colors, especially in her paintings… For the longest time, I thought I wanted to do landscape painting, so I like a lot of landscape painters. I also really like the Golden Age illustrators, like NC Wyeth, Norman Rockwell, and J.C. Leyendecker. Their form is just astounding, I love how tight they are with their color usage while still being so expressive with what they’re illustrating. There is one contemporary artist, her name is Elena Stonaker, and she does fabric sculpture. 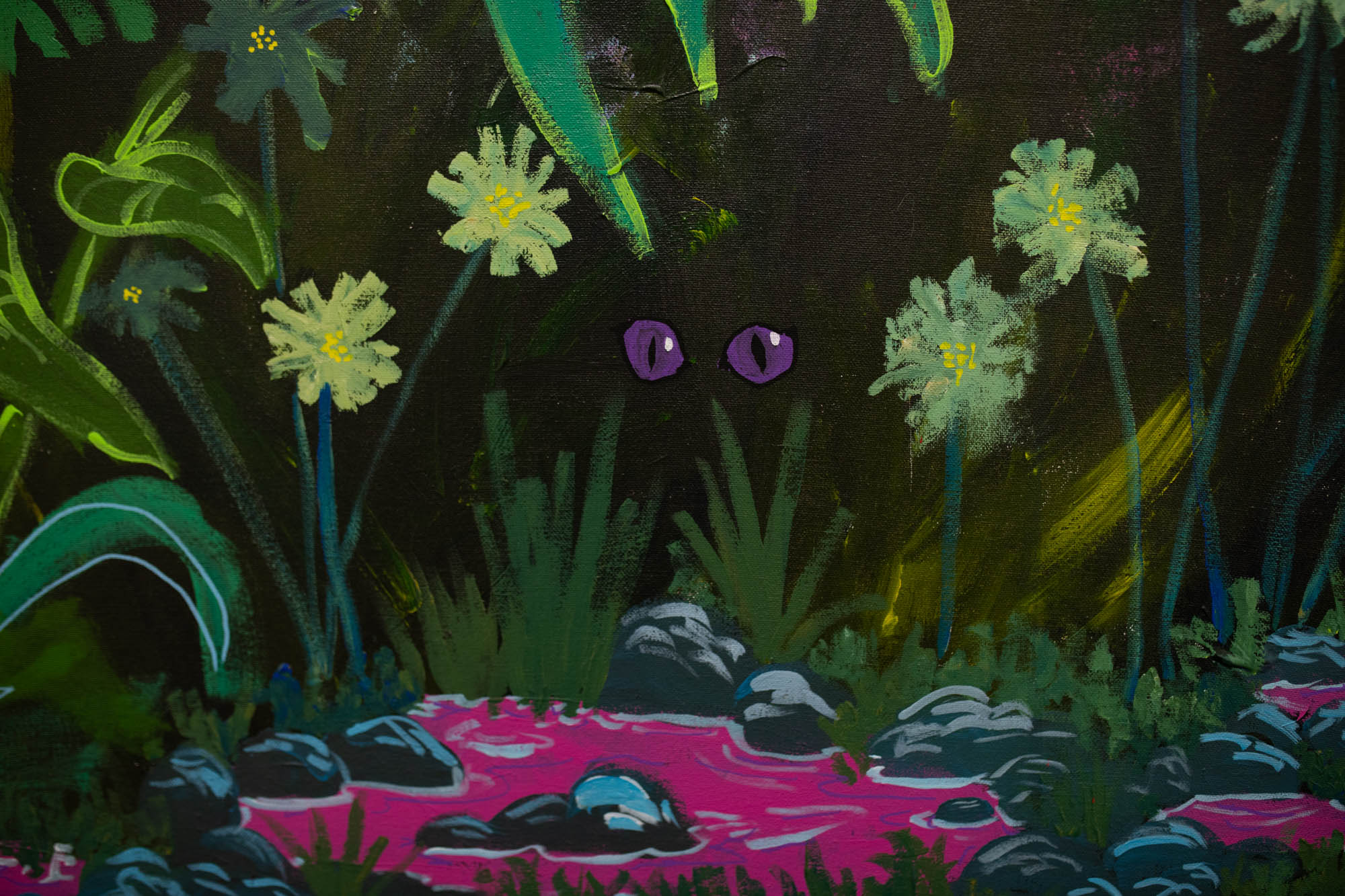 BF: What’s something you would like people to know about you?

GM: I don’t know, I’m not a very public person, I’m actually pretty shy. Here’s one; I can play the bagpipes. It’s a cool skill. When I would go up to Notre Dame you could go to home games and play them and people would just tip you.

BF: Really? Do you play funerals?

GM: I did, but not anymore. I really should take advantage of the fact that I can do it, and there’s a huge scarcity and I’ve done it before, but I’m shy, and the bagpipes are kind of the antithesis of that in terms of instruments.

You can keep up with Graham on his Instagram, and his entire body of work can be found here.