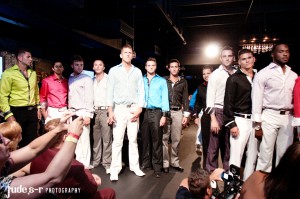 Indianapolis isn’t exactly known for being a progressive or fashionable city, but we at Pattern believe that this can and should change. We’re always looking to introduce Pattern to different people and places, so on Friday, June 22, Polina and I road tripped to Fort Wayne, equipped with VIP tickets to Fashion Show 3.0, “the biggest fashion event in the city.”

Held in the YOLO Event Center space behind eArly birdD’s Ultra Lounge, Fashion Show 3.0 delivered stylish entertainment to a supportive, lively crowd. The large event space filled up quickly, with the earliest arrivals able to snag prime front row seats along the long T-shaped catwalk. And by the time the program began with a performance by Crush House Entertainment, only standing room remained as the first model rocked the runway to the cheers of the sold-out crowd and the clubby beats of DJ Trend.

A parade of white dresses wrapped in airy tulle marked the runway debut of Jaggar Estep’s DFN by Jaggar, whose inclusion of blue glowstick accents alluded to his love of electronic music, while Ana Lynn designer Carole Anne Housman premiered a series of colorful floral sundresses clearly inspired by the 1950s and 1960s.

During intermission Fatima Washington treated the Fashion Show 3.0 crowd to an energetic performance, after which Zathan Marcs revealed his “Lucidity” collection, an eclectic mix of theatrical ball gowns and creatively tailored menswear.